I get to meet a lot of people in the course of producing this site and, in one case, this has resulted in a deep friendship. Not only is Stuart a great fan of this site, but he informed me that anything he can scan from his collection is at our disposal. This was an especially generous offer because, from his descriptions, he appears to have one of the world’s biggest collections of little girl lore. With such an extensive collection, I assumed he could fill many of the gaps I have been trying to fill in. But alas, no collection is perfect and he does not recall owning any of the postcards from ‘La Journée de Suzette’ by Armand Gaboriaud. However, when I mentioned that series, it reminded him of a charming book called A Child’s Day (1913) using photographs by Will and Carine Cadby and accompanied by the poetry of Walter de la Mare. The samples he sent were just so precious and so I requested he scan the entire book.

There is not much biographical information available except for a kind of curriculum vitae. The couple were English and lived in London until settling later in Kent. Will Cadby, in particular, was personally known by Alfred Stieglitz and they maintained a written correspondence. Will began taking photographs in 1891 and his first exhibitions were in 1893. In 1894, the couple were elected members of The Linked Ring and began exhibiting in The London Salon. In 1896, Will began experimenting with white-on-white photography with models dressed in white shot with a white background. This signature style is apparent in A Child’s Day. The couple published their first of several children’s books in 1902, Dogs and Doggerel. For the most part, Carine did the writing and production while Will provided the photos. From 1912–1932 the Cadbys wrote a column called “London Letter” for Photo-Era magazine until its demise.

The Cadbys’ work had an international following and was appreciated in the United States as well as the European subcontinent. A particularly delightful example is Die Heilige Insel (The Holy Island, 1917). This kind of book would have been well-received during this heyday of Europe’s fascination with fairies. 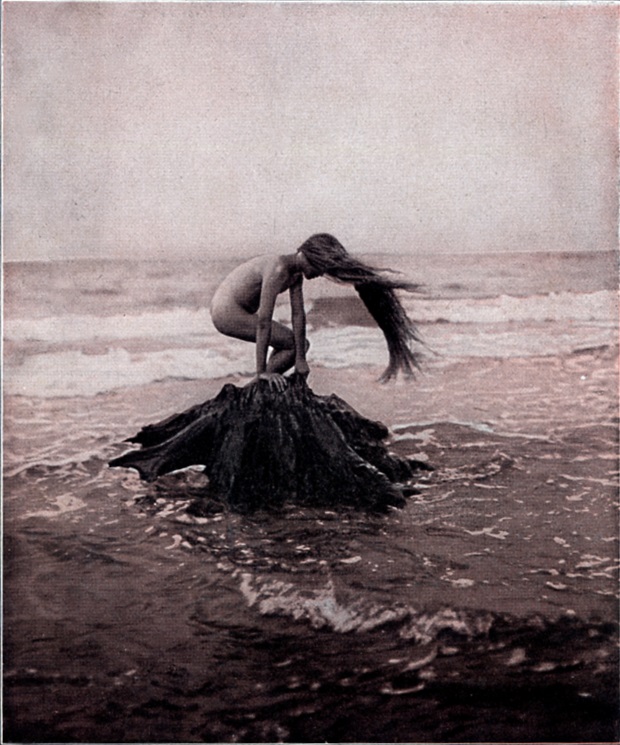 It is remarkable that there have been so many books published in various languages containing images of little girls accompanied by poetic description. What follows are excerpts from de la Mare’s writing followed by the image that appears on the opposing page. We are introduced to our subject thus:

But nevertheless, as sweet as I can,
I’ll sing a song to Elizabeth Ann—
The same little Ann as there you see
Smiling as happy as happy can be.
And all that my song is meant to say
Is just what she did one long, long day,
With her own little self to play with only,
Yet never once felt the least bit lonely.

… At last from the pillow,
With cheeks bright red,
Out comes her round little
Touseled head;
And out she tumbles
From her warm bed. … 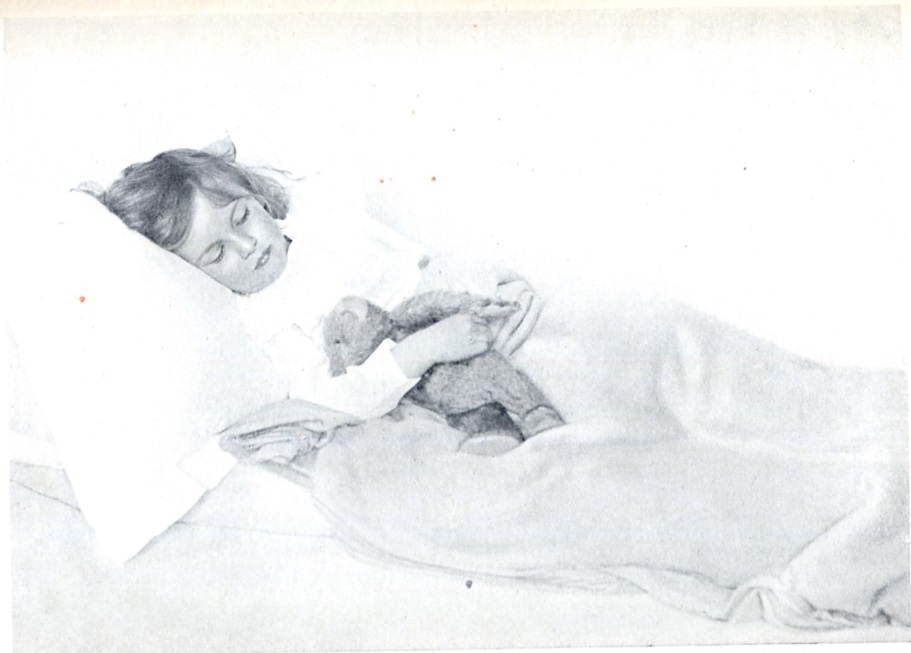 … But sailing the world’s wide ocean round,
In a big broad bale from Turkey bound,
All for the sake of Elizabeth Ann
This towel’s been sent by a Mussulman,
And with might and main she must rub—rub—rub—
Till she’s warm and dry from her morning tub. 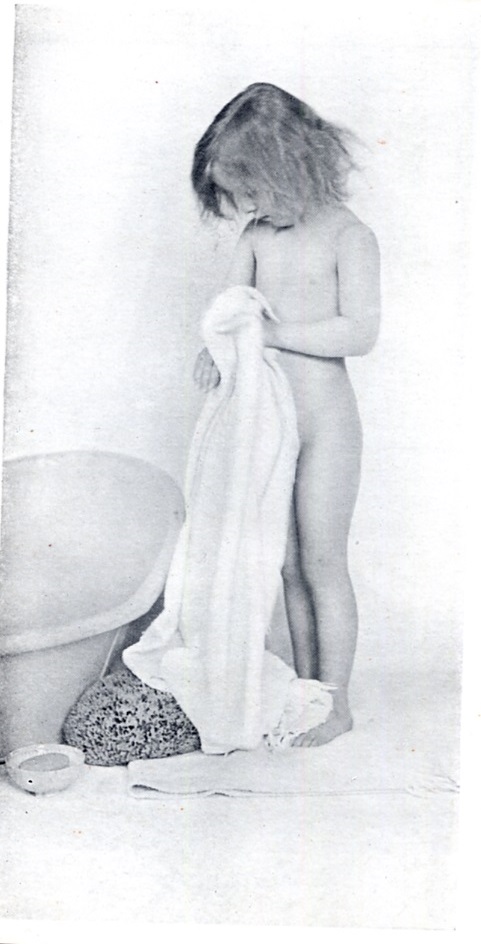 Now twelve above,
And twice six beneath,
She must polish and polish
Her small, sharp teeth.
The picture, you see,
Entirely fails
To show how nicely
She nipped her nails. … 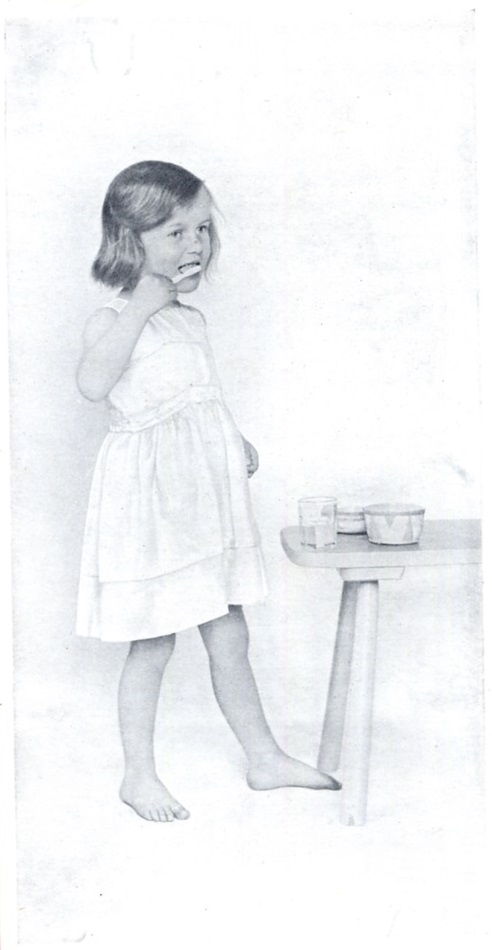 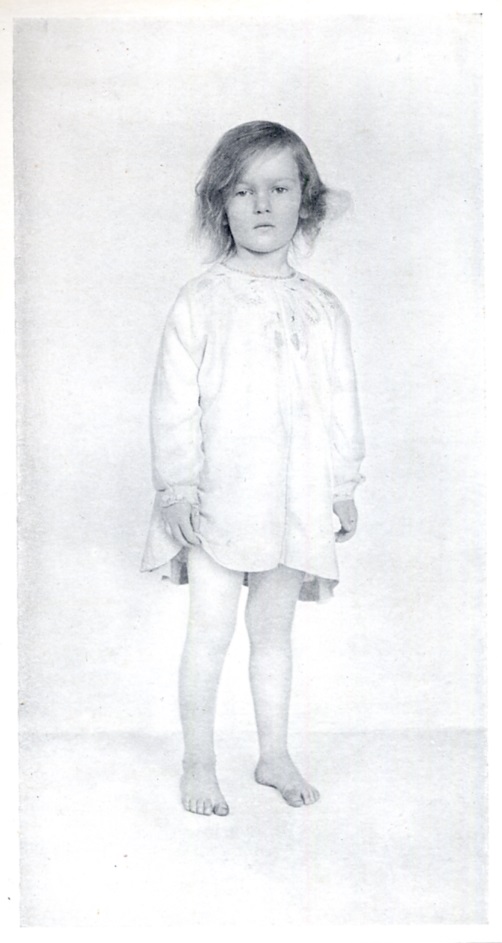 … Yet—though, of course, ‘twould be vain to tell a-
Nother word about Cinderella—
Except for a Mouse on the chimney shelf,
She put on her slippers quite—quite by herself,
And I can’t help thinking the greater pleasure
Is to dress in haste, and look lovely at leisure.
Certainly summer or winter, Ann
Always dresses as quick as she can. 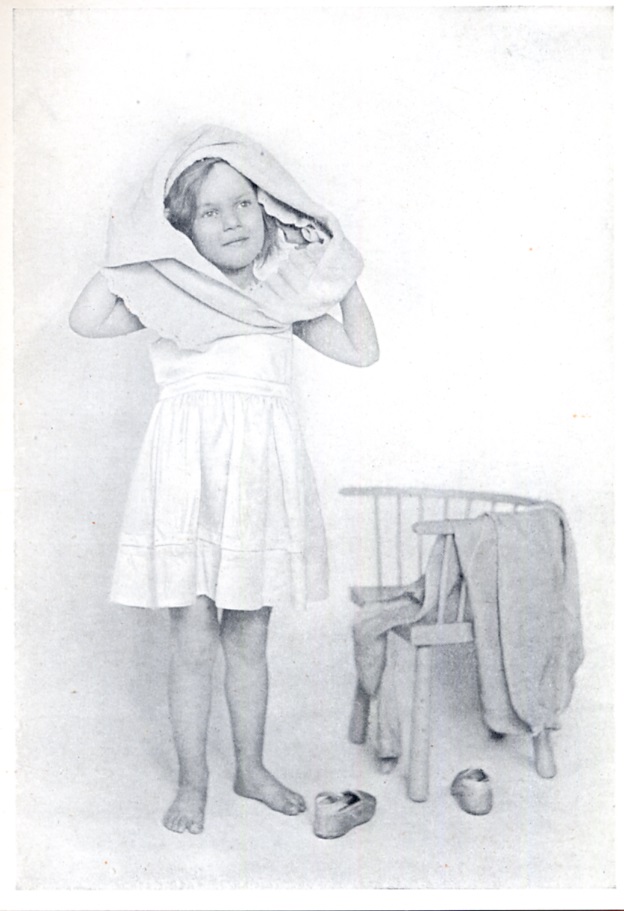 And there she is (on the other side),
The last button buttoned, the last tape tied.
Her silky hair has perched upon it
A flat little two-stringed linen bonnet.
Each plump brown leg that comes out of her frock
Hides its foot in a shoe and a sock. … While all the pigs
From York to Devon,
Have finished their wash
Before half-past seven.
But Elizabeth Ann
Gets up so late
She has only begun
At half-past eight
To gobble her porridge up— … 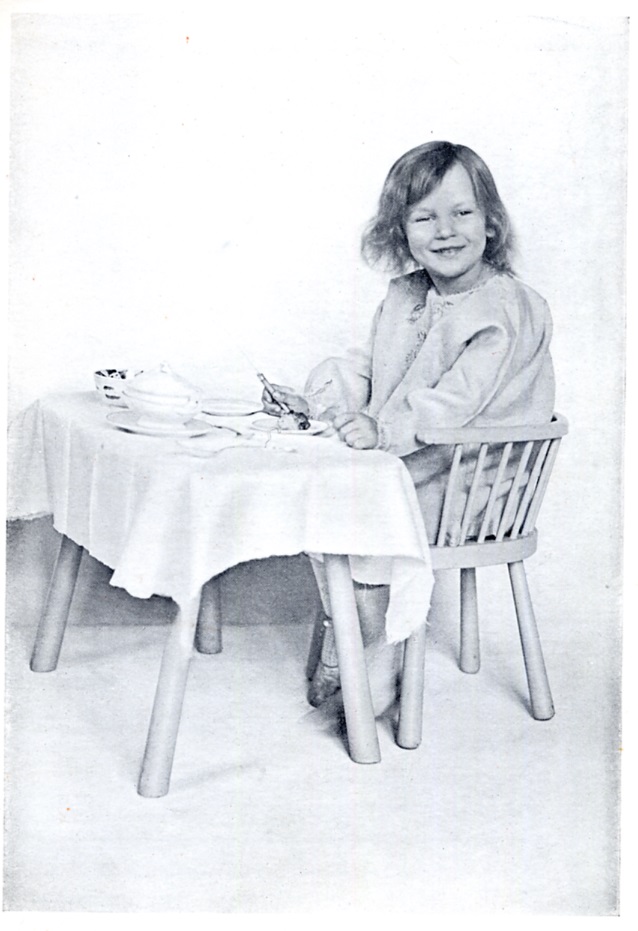 The following passage does not seem to make sense. Throughout the book, de la Mare incorporates the girl’s activities with those of wild beasts as in the pig reference above. In this case, it seems the poet did not have anything to say about the image itself.

… But Time, she nods her head—
Like flights of the butterfly,
Mammoths fade through her hours;
And Man draws nigh.
And it’s ages and ages ago;
Felled are the forests in ruin;
Gone are the thickets where lived on his lone
Old Bruin. When safe into the fields Ann got,
She chose a dappled, shady spot,
Beside a green rush-bordered pool,
Where, over water still and cool,
The little twittering birds did pass,
Like shadows in a looking-glass. … 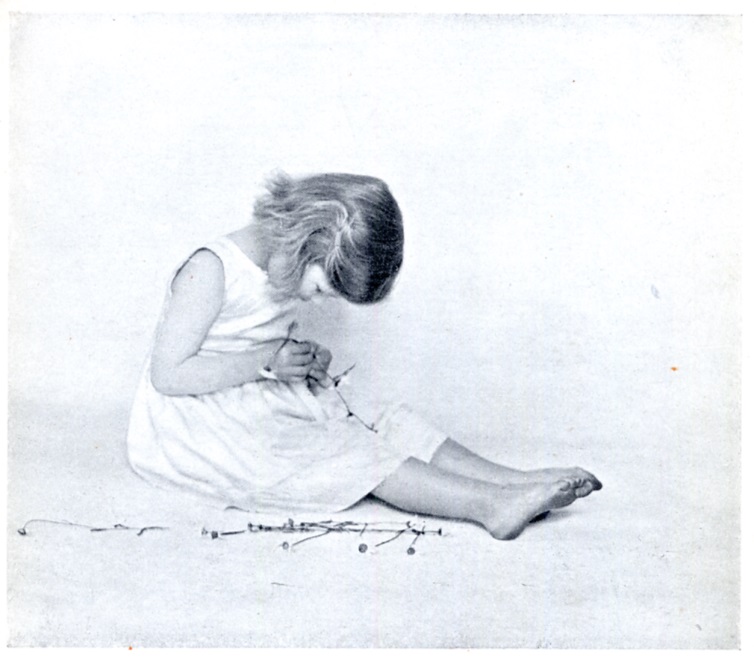 Please to look and see it there,
Dangling in her fleecy hair. 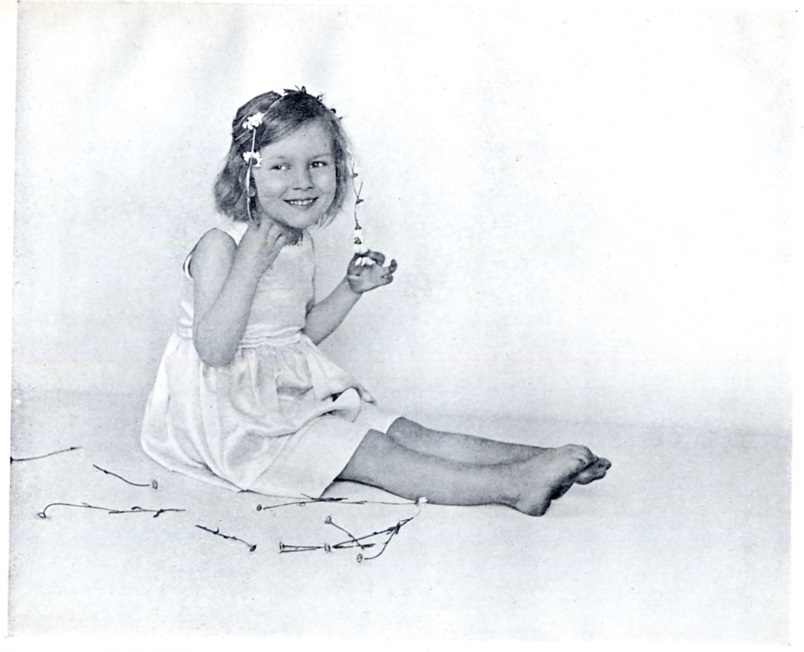 … “Happy, happy it is to be
Where the greenwood hangs o’er the dark blue sea;
To roam in the moonbeams clear and still
And dance with the elves
Over dale and hill;
To taste their cups, and with them roam
The fields for dewdrops and honeycomb.
Climb then, and come, as quick as you can,
And dwell with the fairies, Elizabeth Ann!” … 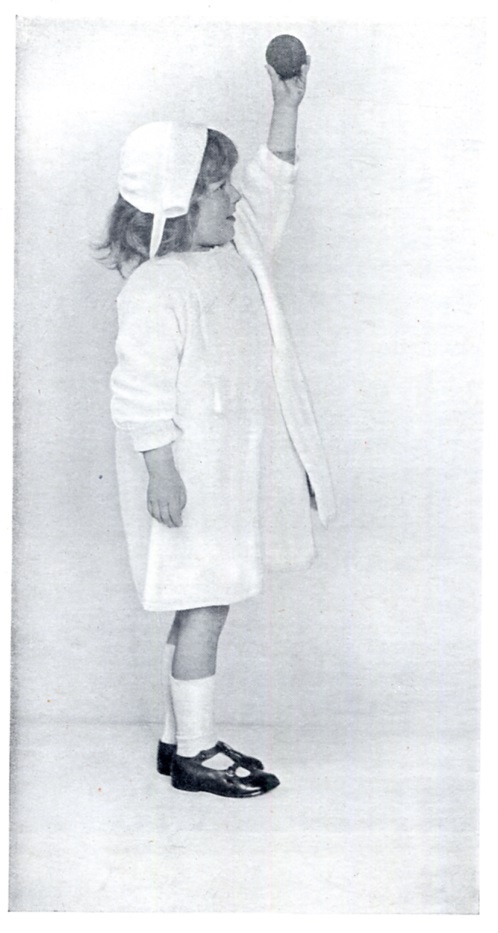 But this little morsel of morsels here—
Just what it is is just not clear: …
… But it’s all the same to Elizabeth Ann.
For when one’s hungry, it doesn’t much matter
So long as there’s (something) on one’s platter. 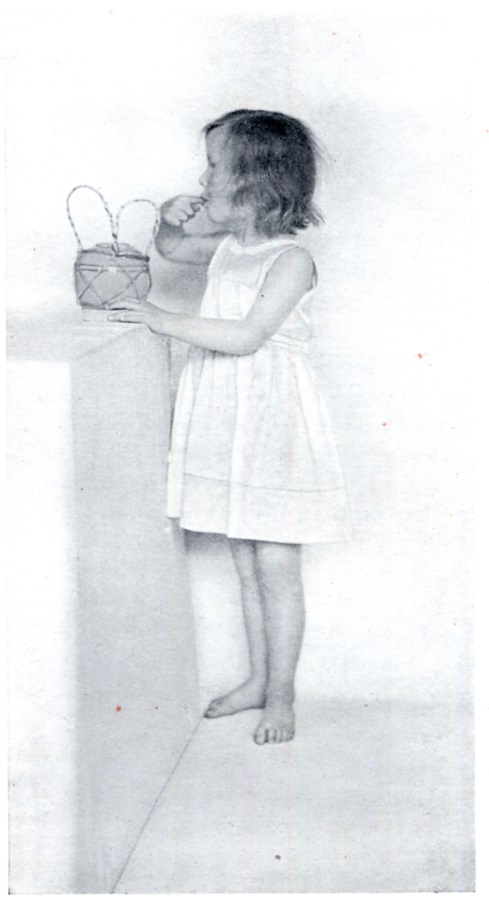 Now fie! O fie! How sly a face!
Half greedy joy, and half disgrace;
O foolish Ann, O greedy finger;
To long for that forbidden ginger! … 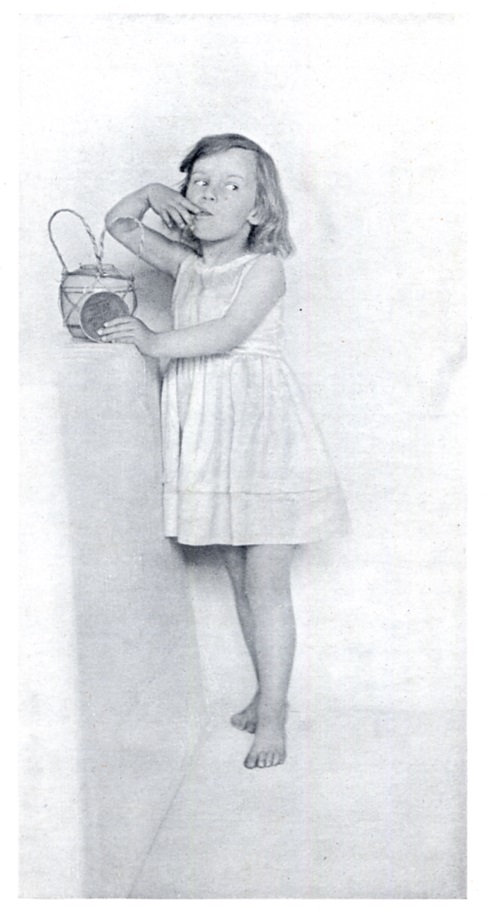 … And see! That foolish Ann’s forgot
To put the cover on the pot;
And also smeared—the heedless ninny—
Her sticky fingers on her pinny.
And, O dear me! Without a doubt,
Mamma has found the culprit out. … 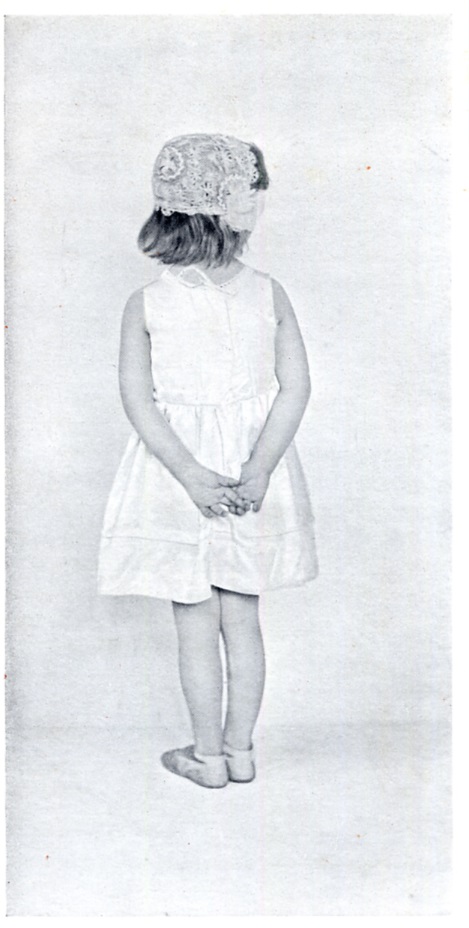 … And here upon the stroke of three,
Half-way ‘twixt dinner-time and tea,
Cosily tucked in her four-legged chair,
With nice clean hands and smooth brushed hair,
In some small secret nursery nook,
She sits with her big Picture book. … 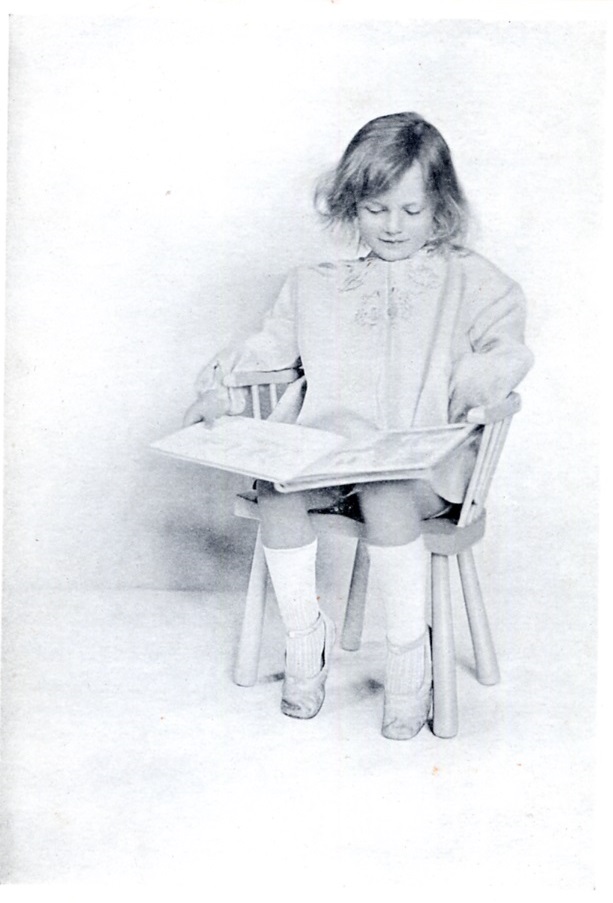 As soon as ever twilight comes,
Ann creeps upstairs to pass,
With one tall candle, just an hour
Before her looking-glass.
She rummages old wardrobes in,
Turns dusty boxes out;
And nods and curtsies, dances, sings,
And hops and skips about. … … But now, dear me!
What’s this we see?
A dreadful G—
H—O—S—T!
A-glowering with
A chalk-white face
Out of some dim
And dismal place. … 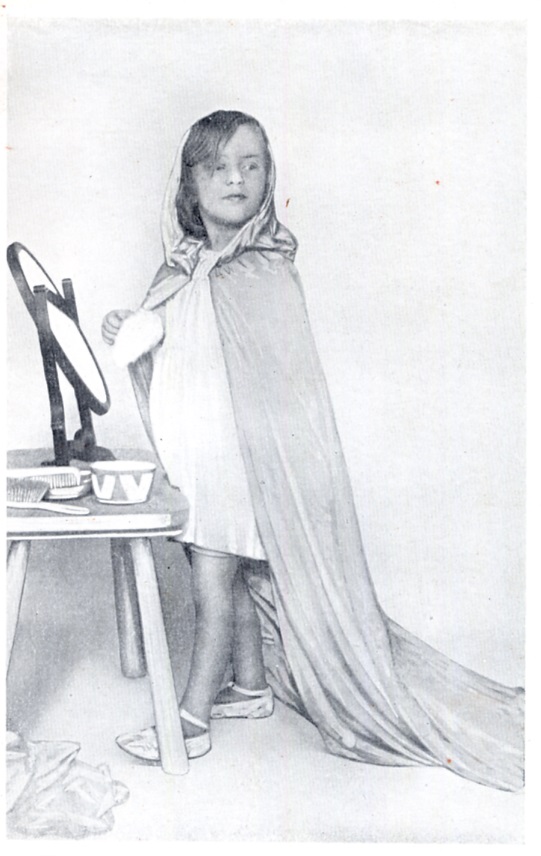 “But now, my dear, for gracious sake!
Eat up this slice of currant cake;
Though certain sure, you’ll soon be screaming
For me to come—and find you dreaming. …” 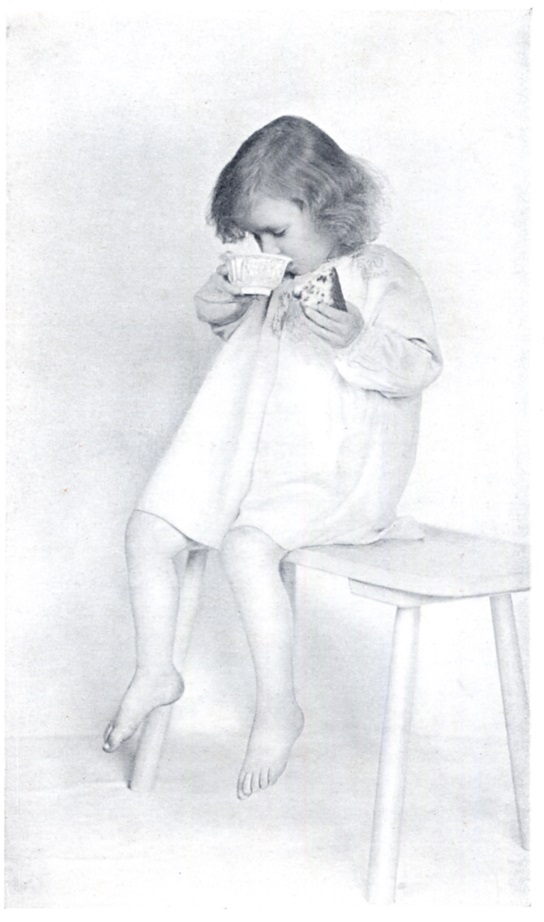 But soon as Nurse’s back was turned
Ann’s idle thumbs for mischief yearned.
See now, those horrid scissors, oh,
If they should slip an inch or so!
If Ann should jog or jerk—suppose,
They snipped off her small powdery nose! … 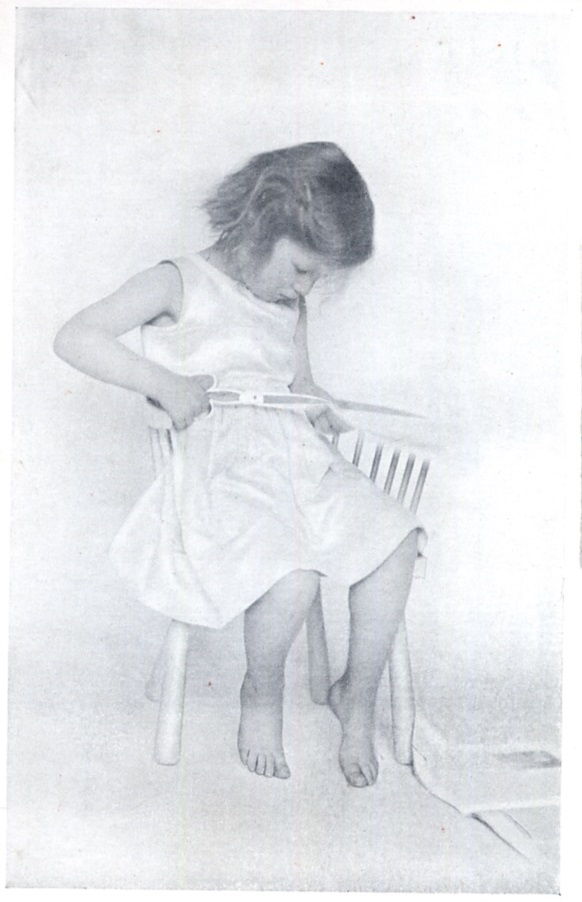 But higgledy-piggledy
Slovenly Ann
Jumps out of her clothes
As fast as she can;
And with frock, sock, shoe,
Flung anywhere,
Slips from dressupedness
Into her bare. … 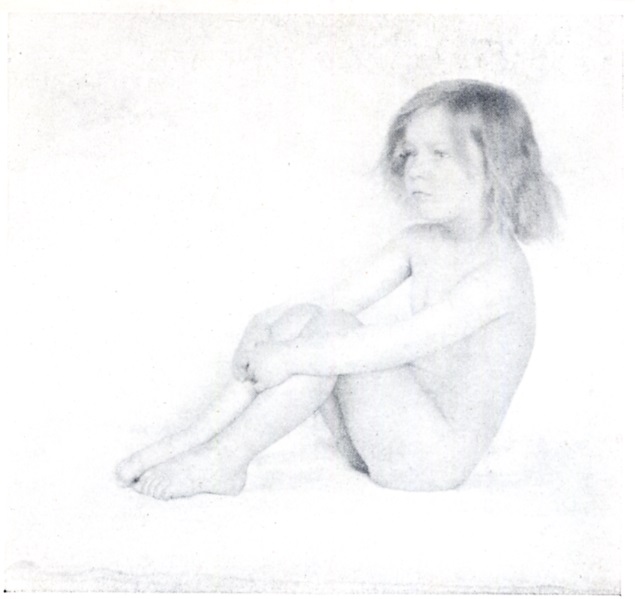 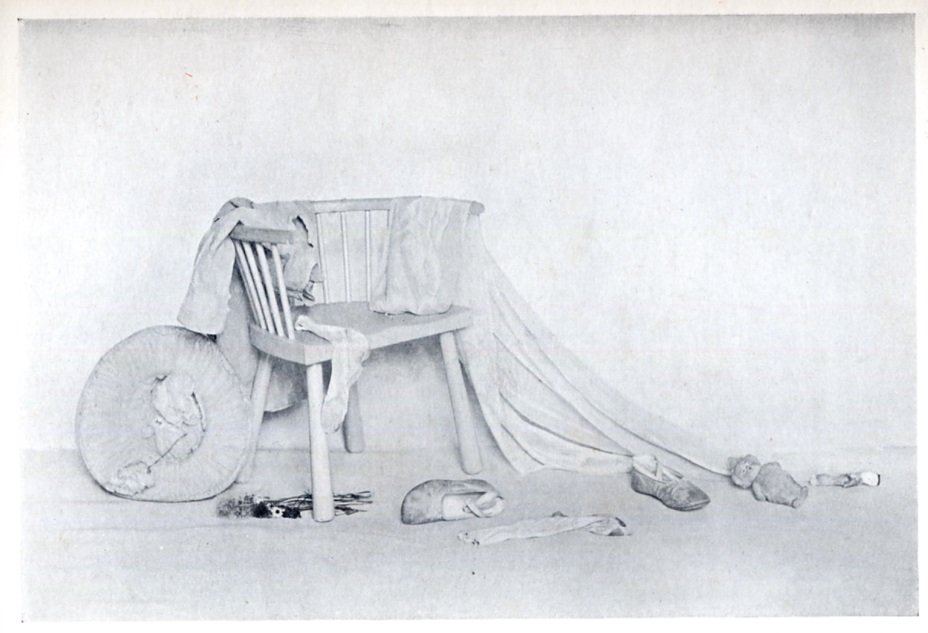 I was informed that there was some confusion about the date.  I had originally placed the date of 1913 for A Child’s Day which may have been confused with a film produced that year.  A colleague has informed me that the first edition was published in 1912 by Constable and was in a 12″ by 9¾” format, while the second edition was 9¾” by 7¾” and published in 1915 with a third reprint in 1920—sometimes referred to as the second edition by those who are now reproducing copies of many of these books with expired copyrights.

2 thoughts on “Poetry in White: Will and Carine Cadby”