Time for some album art! In this batch we have some old stuff and some new stuff, with cover art from Black Sabbath, William Fitzsimmons, The Game, Tones on Tail and many others, so let’s get started.

Our first album cover is for a band we all know, Black Sabbath. This is the cover for their live Reunion album, and it is spectacular. First off, it sort of references the cover of Ozzy’s solo album No Rest for the Wicked. But beyond that, I just love these demon toddlers (probably portrayed by the same model) with their little cloven hooves and tiny wings. That, along with the fact that they’re girls, makes them anti-cherubs, I think. The cover was designed by Glen Wexler, who also did the cover for Van Halen’s Balance that I profiled several years ago (and that Wexler himself commented on). You could almost say this is a counterpart cover to Balance. It may just be my favorite Black Sabbath cover now. Well, it’s a tossup between this and Sabbath Bloody Sabbath (front and back), beautifully illustrated by Drew Struzan. 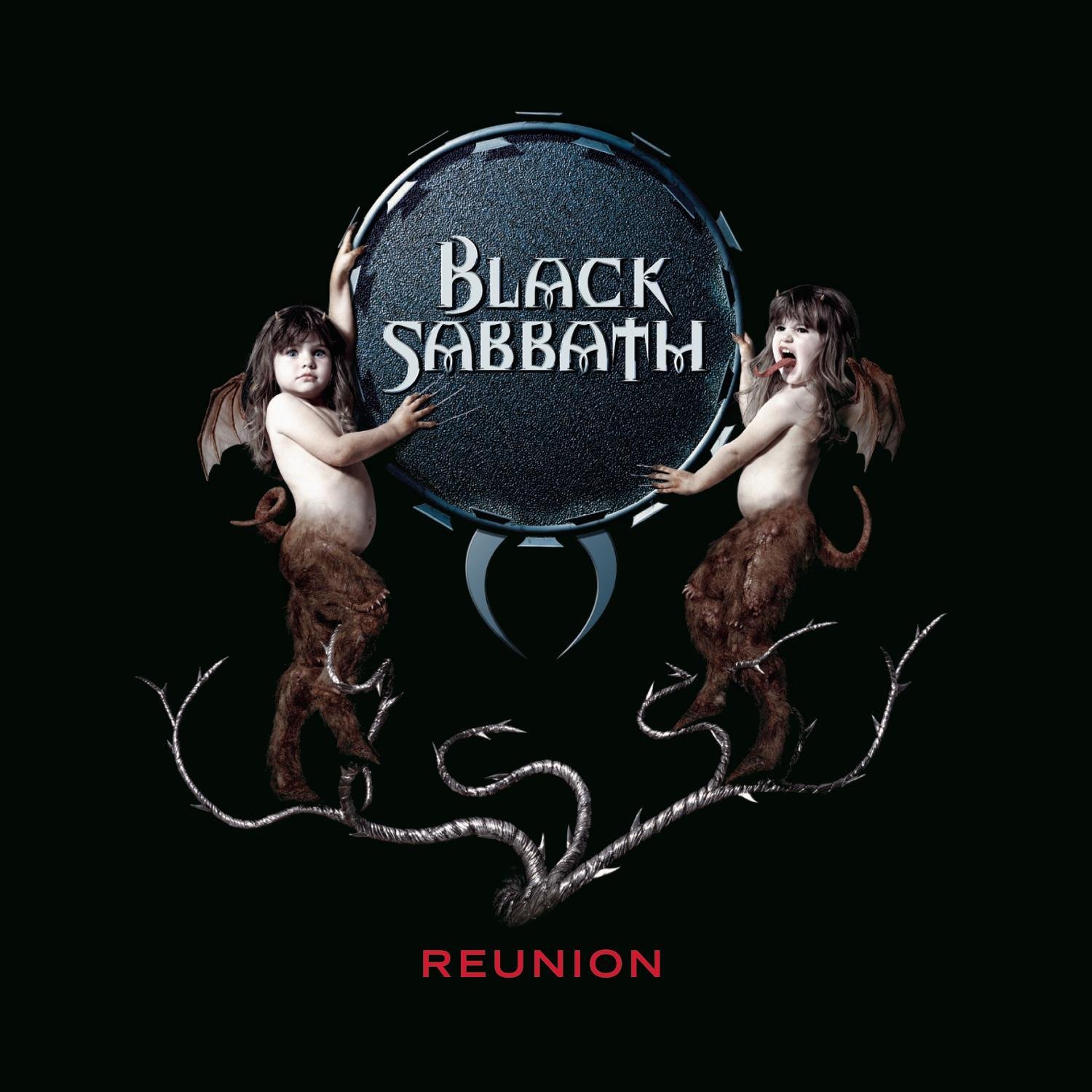 Our next cover is for Relative Ash’s Our Time with You. I really know nothing about this band other than that they formed in the mid-90s and are said to sound something like Deftones (I haven’t listened to them). They seem to have put out this one album and then broken up. If anyone has more info about the band, this album cover or its creator, you are welcome to comment on it. I like the simplicity and the Pandora’s Box symbolism here. 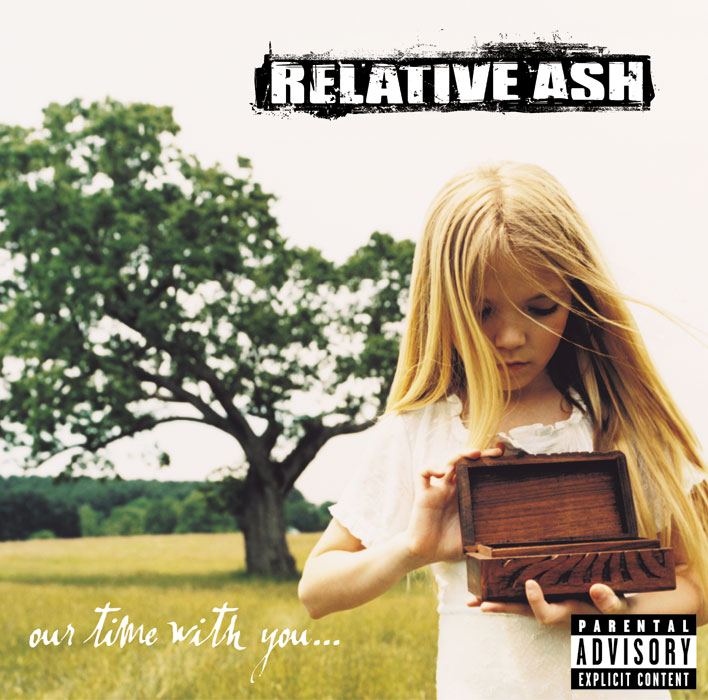 Photographer Unknown – Relative Ash – Our Time with You (cover)

Here are a couple of covers for albums by singer-songwriter William Fitzsimmons. The first featured album, Until When We Are Ghosts, was his debut. An interesting factoid about Fitzsimmons: both of his parents, who were also musicians, were blind. 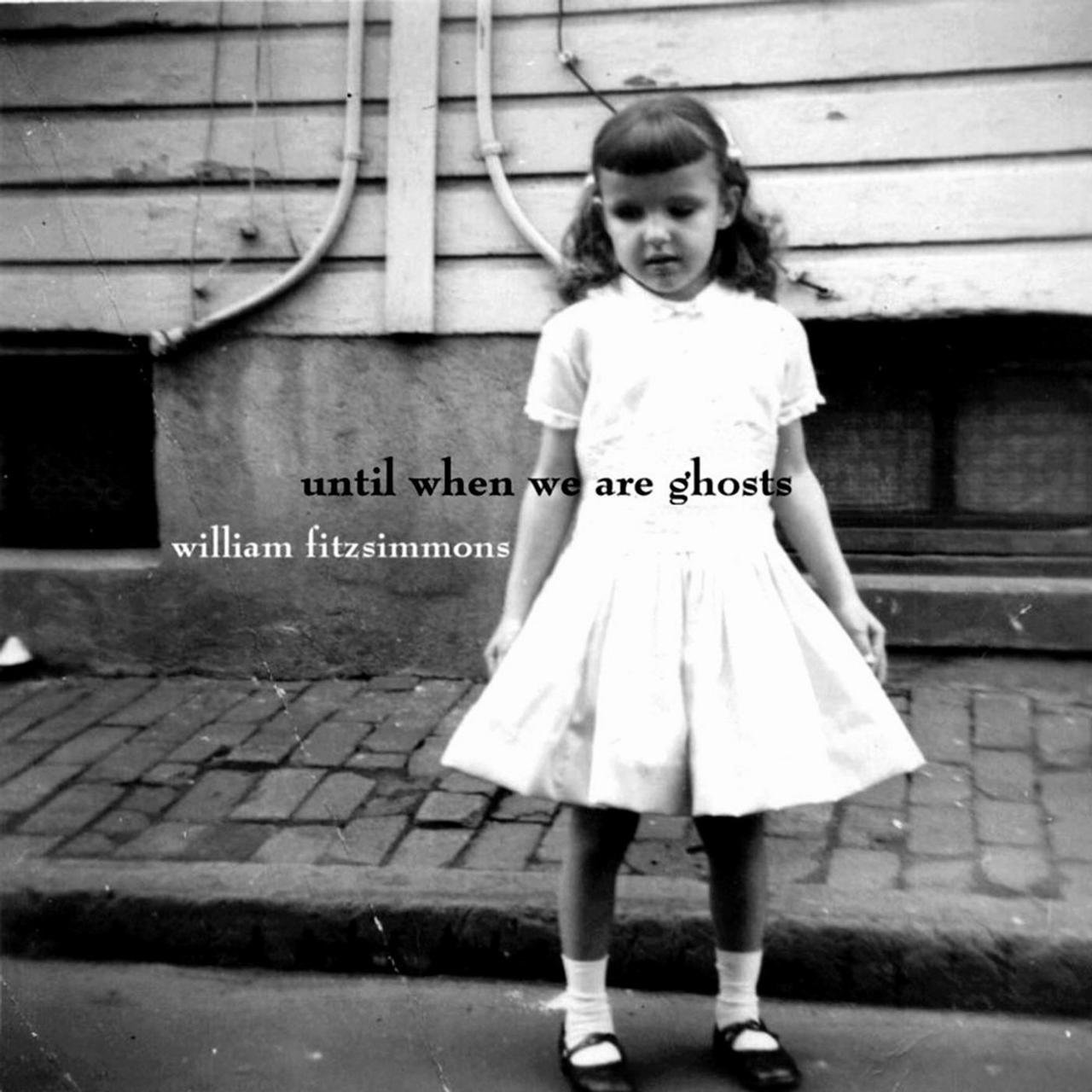 Photographer Unknown – William Fitzsimmons – Until When We Are Ghosts (cover)

I really love this next cover though. The little equestrienne in her dressage jacket and bowler derby is certainly adorable. The album itself is actually the second of two albums that are thematically linked, with each one being about one of Fitzsimmons’s grandmothers. The sad tale of the singer’s father and his father’s mother (the subject of this album) is recounted on Fitzsimmons’s website if you want to read it. You can find it here. 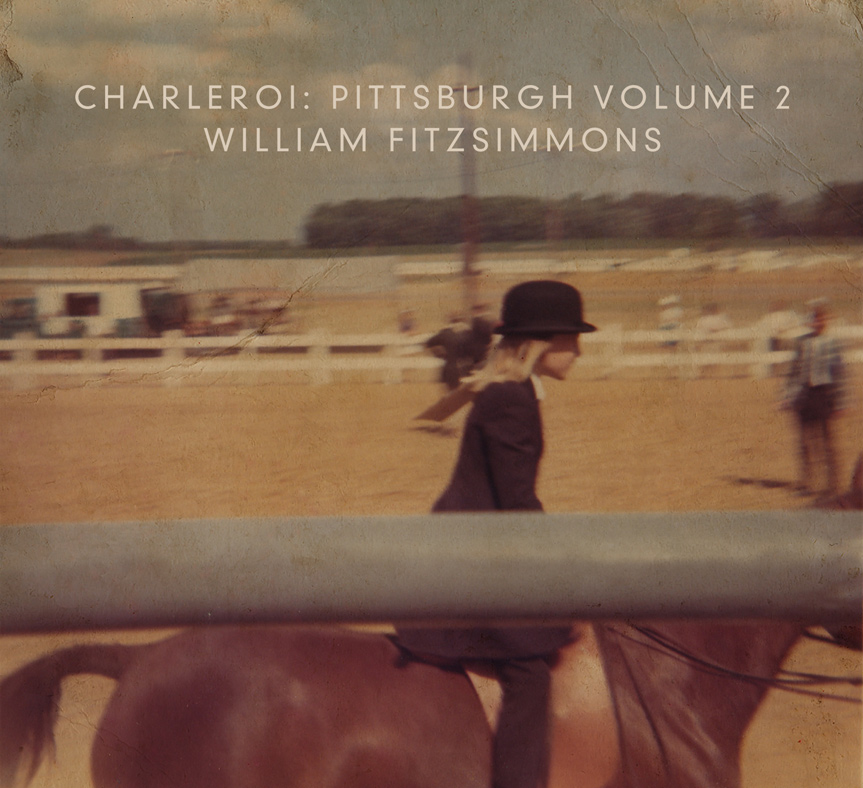 Now here’s an album with a cover featuring the childhood countenances of three well-known country-pop singers, Emmylou Harris, Linda Ronstadt and Dolly Parton, just in case you ever wondered what they looked like as little girls. By the way, if you aren’t aware of it, the young Dolly has been portrayed (wonderfully, I think) by Alyvia Alyn Lind in two made-for-television movies as of this post. 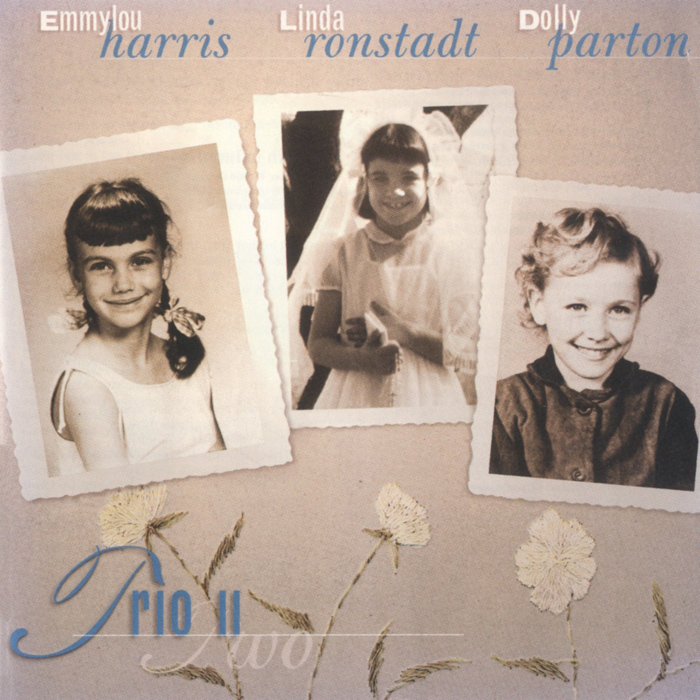 Tones on Tail was a side project of Bauhaus guitarist Daniel Ash that only lasted a couple of years but nevertheless put out several singles, three EPs and one LP, that being this album, Pop. The cover depicts a nude toddler girl balancing upon a wall near the woods, but there is something not quite right about her face/head. It almost looks like she is wearing a mask and wig combo, or at least a wig. That hair just does not look real. If it is, it’s a really horrible haircut. That, combined with the darkness of the trees in the background, invest the image with an undeniable creepiness. The photographer of the image is listed on Wikipedia (and presumably in the album’s notes) as Mr. Atlas, which makes sense I suppose, as he probably didn’t want t be identified for taking a nude photo of a child in the woods. 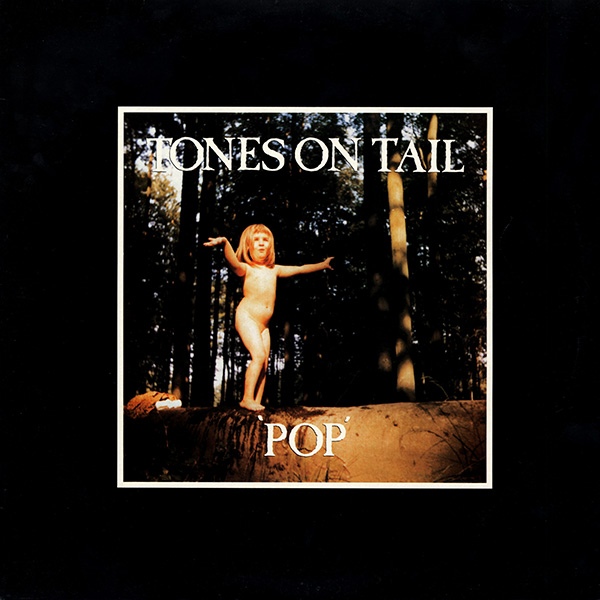 And speaking of toddlers with things on their head, our next album cover shows a little girl wearing some kind of warrior’s helmet in addition to her pink princess dress and pink tennis shoes. The album is Take It Like a Man by the Butcher Babies, a heavy metal band fronted by two female vocalists. Obviously the masculine helmet is intended to contrast with the girlishness of the dress and, well . . . the girl herself. 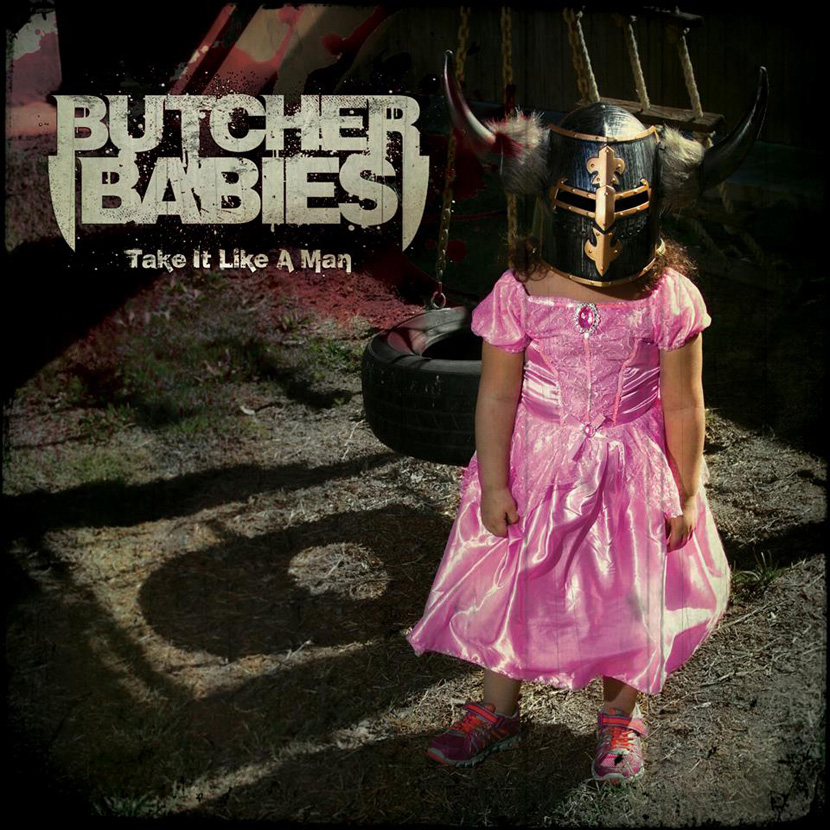 Photographer Unknown – Butcher Babies – Take It Like a Man (cover)

Blood Moon: Year of the Wolf is a compilation album by rapper The Game. I don’t really know much about The Game or this album, but I really liked the cover, with its sassy little girl in red showing a big bad wolf who’s boss. Now, what ever could that be a reference to? 😉 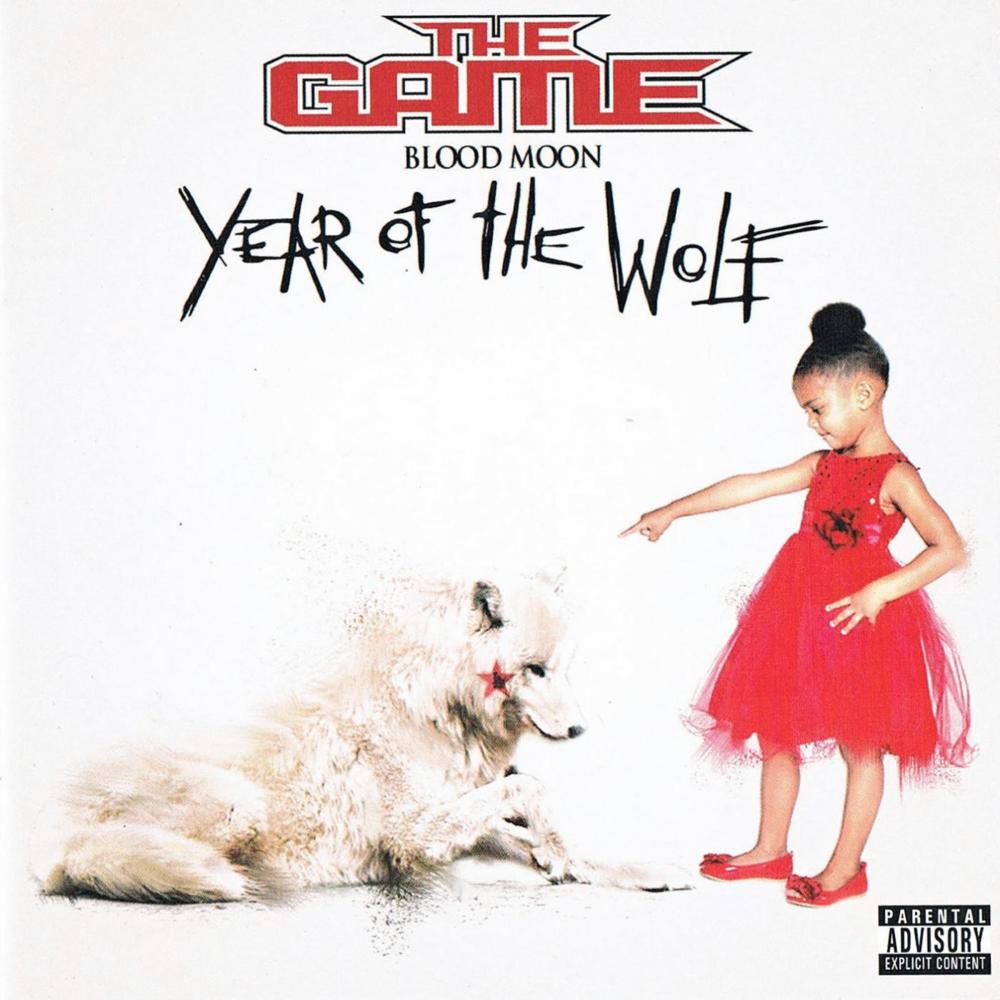 Our next cover is for Unknown Mortal Orchestra‘s single release SB-03, the third in an ongoing series of psychedelic instrumental tracks released by the band every Christmas. The cover was created by Jenny Nielson, front man Ruban Nielson’s wife. The child in the photo may be herself when she little or someone else entirely. I really don’t know, but I like her creative flair nonetheless. 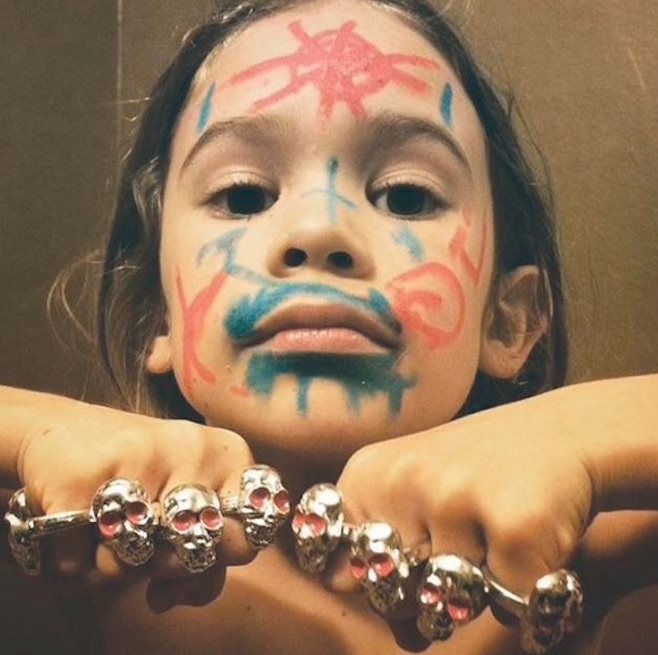 Anders Osborne is singer-songwriter heavily influenced by the blues. All of his output so far has been released on small labels, most of them specializing in blues and jazz music. Little kids flipping off the camera is nothing new to the internet, but I think this is the first time I’ve actually seen it as an official piece of art, in this case for Osborne’s album Peace. 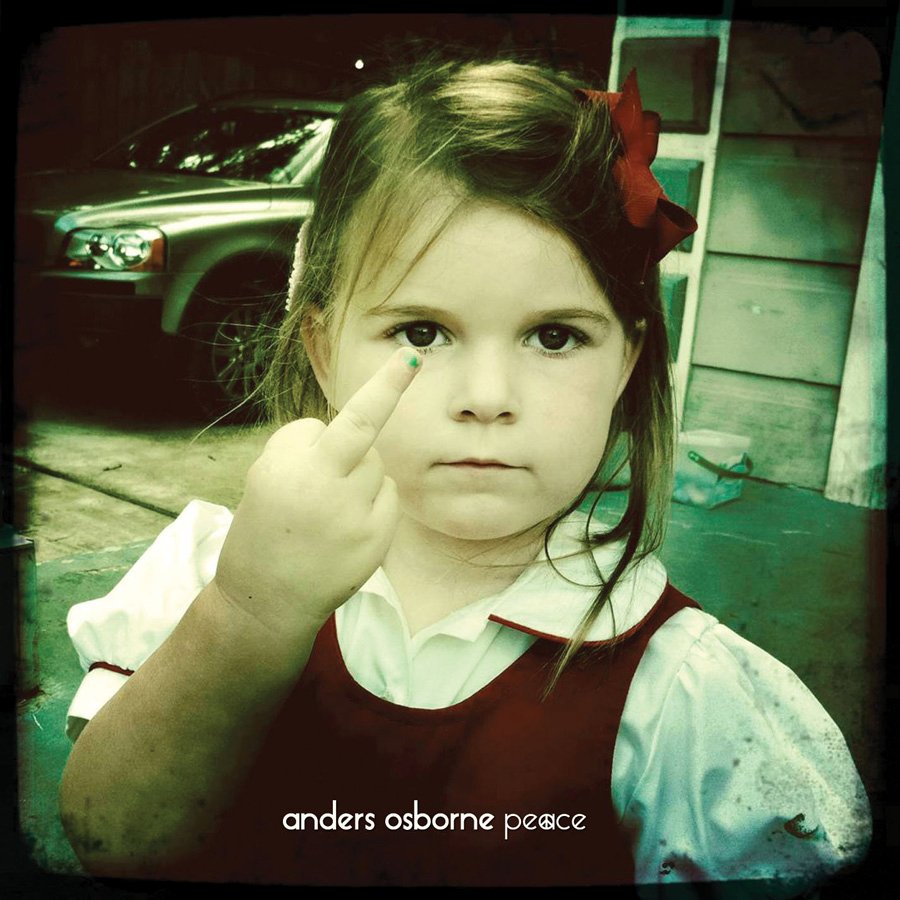 Our penultimate album cover is actually the first in a whole series of anthology albums collecting lesser known late sixties pop music. The album series features the exact same artwork, only each one is rendered in different colors. At a guess, I would say the original illustration came from the pen of Aubrey Beardsley, but try as I might, I was unable to confirm that. So, as with most of these, the artist will have to remain unidentified for now. 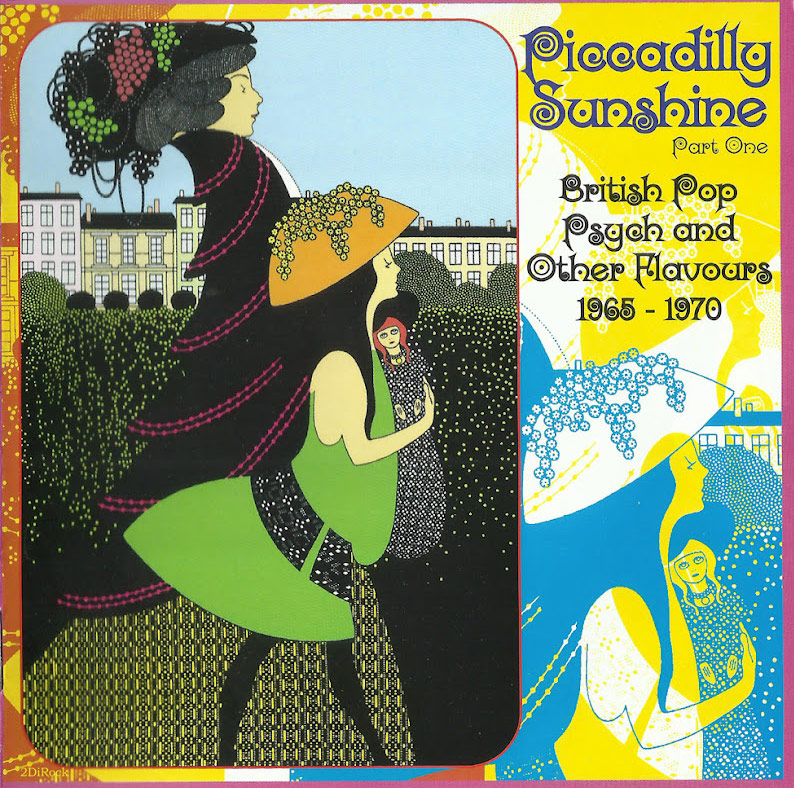 And last but certainly not least is this beautifully illustrated cover for Robin Crutchfield‘s Into the Dark Wood. Crutchfield is one of those peculiar souls who has been quietly making his own sort of art and music on the fringes for decades, influencing many but never quite becoming as well-known as those who came after. He began as a performance artist which soon transitioned into music, and then, along with his band DNA, he became one of the pioneers of the avante-garde musical movement known as No Wave. Eventually he began making music eerily similar to (but not quite) Medieval music, of which Into the Dark Wood is his latest. The cover art, I’m quite certain, is by some Victorian fairy artist, though I’ve been unable to pin down who. My hunch is Edward Robert Hughes, but again I was not able to confirm it. I would really love to know who created this piece, so if anyone out there is willing to research this more thoroughly I would be eternally grateful. I would love to feature the original image here, especially if I can get a larger one online somewhere. 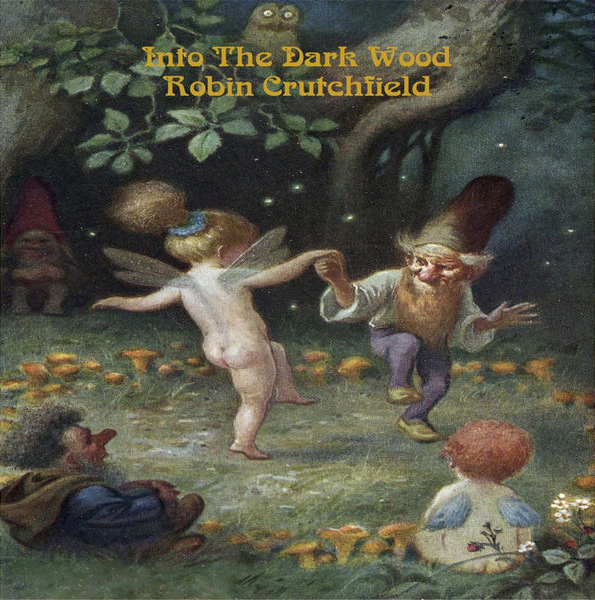