This is the first of two articles on the use of the girl image in anti-Roma racism. Here I will describe the hundreds of years old accusation that Roma steal non-Roma children. In the next one, I will discuss in depth the case of the “blond angel” in 2013, when the presence of a blond little girl in a Roma camp led to the claim by both police and media that she had been abducted from a non-Roma family.

Note: Following European usage, I use the singular noun Rom and the plural noun and adjective Roma to designate people of this ethnicity, while the adjective Romani will designate the corresponding culture and language. There are also ethnic Roma subgroups carrying specific names: Sinti, Kale, Manush, Romanichal, etc. However well-known designations such as “Gypsy” or “Tzigane” / “Gitano” should be avoided, as they usually carry cultural and literary stereotypes.

The Roma people originated from India and migrated into Europe during the Middle Ages. For a long time it was thought that they came from Egypt, as illustrated by the novel Isabel of Egypt, first youth love of emperor Charles V written by the German romantic Achim von Arnim in 1812 (imagining a brief love affair between the Holy German Emperor and the daughter of the leader of the Roma people); indeed the word “Gypsy” comes from “Egyptian.” On the other hand designations such as “Tzigane” or “Gitano” come from the medieval Greek Atsinganos, meaning “untouchable.”

Roma were enslaved in Romania until the middle of the 19th century. In Western Europe, they have been persecuted since the 15th century, first accused of being Turks, or Turkish spies, then of being criminals. Over and over, laws and ordinances were enacted to prevent them from settling down, with various penalties for offenders: deportation, forced labour, flogging, mutilation, execution or their children to be taken away. In 1721, the Holy Roman Emperor Charles VI ordered the execution of all Roma adults, while children were “to be put in hospitals for education.”

Being always expelled from one place to another led the Roma people to a life of forced nomadism (similarly, during periods of persecution, Jews often moved from one town to another); from that comes the image of Gypsies living in caravans. While Jews were generally emancipated throughout Western Europe during the 19th century, the same did not happen for Roma, who were considered “born criminals.” The persecution culminated in the Nazi genocide that targeted both Jews and Roma for systematic extermination; the number of Roma victims is estimated between half and one and a half million. This genocide has been called Samudaripen (meaning “mass killing”) or Porajmos / Porrajmos / Pharrajimos (meaning “devouring” or “destruction”).

Literary depiction of Roma shows two apparently contradicting aspects. On the one hand they are presented as criminals on the dark side of humanity. For instance in Bram Stoker’s Dracula, the vampire Count is transported by savage Gypsies. On the other hand the word “Gypsy” suggests a free and careless life made of travel but no hard work, with picturesque customs, clothing, singing and dance, as well as alluring and liberated women, such as Esmeralda in Victor Hugo’s The Hunchback of Notre-Dame, or Carmen in Prosper Mérimée’s novella and the opera by Georges Bizet derived from it. A similar dual racist stereotype holds for African-Americans, seen both as criminals and as people endowed with a very potent sexuality.

Minorities seen as dangerous are generally presented as posing a threat to children. For instance in medieval Europe, Jews were accused of killing Christian children in order to use their blood in the making of unleavened bread for Passover. Now it has been repeated over and over that Roma abduct non-Roma children. Often the abducted child is a girl, as a symbol of helplessness.

The accusation already appears in La Gitanilla (The Little Gypsy Girl), the first novella contained in the Novelas Ejemplares (The Exemplary Novels), the collection of short stories written by Miguel de Cervantes between 1590 and 1612. La Gitanilla is the story of a 15-year-old gypsy girl named Preciosa, who is said to be talented, extremely beautiful, and wise beyond her years. A Spanish nobleman falls in love with her, and after many peripeties, it is revealed that Preciosa is the daughter of a magistrate, Don Fernando de Acevedo, knight of the order of Calatrava; Preciosa’s Roma grandmother confesses to having kidnapped her as a young child and raised her as her own granddaughter. Notice the link between the qualities of Preciosa (talented, beautiful and wise) and the fact that she has been abducted, hinting that Roma as an inferior race could not have such qualities themselves; also in many book covers, Preciosa is shown having blond hair.

I searched the French illustrated “popular” press of the early 20th century for illustrations of anti-Roma racism. Les Faits-Divers Illustrés was a weekly published between 1905 and 1910, with a peculiar taste for the most horrendous crimes and the worst catastrophes. Part of the collection has been digitized by Gallica, and I downloaded there the following image (also found on Wikimedia Commons): 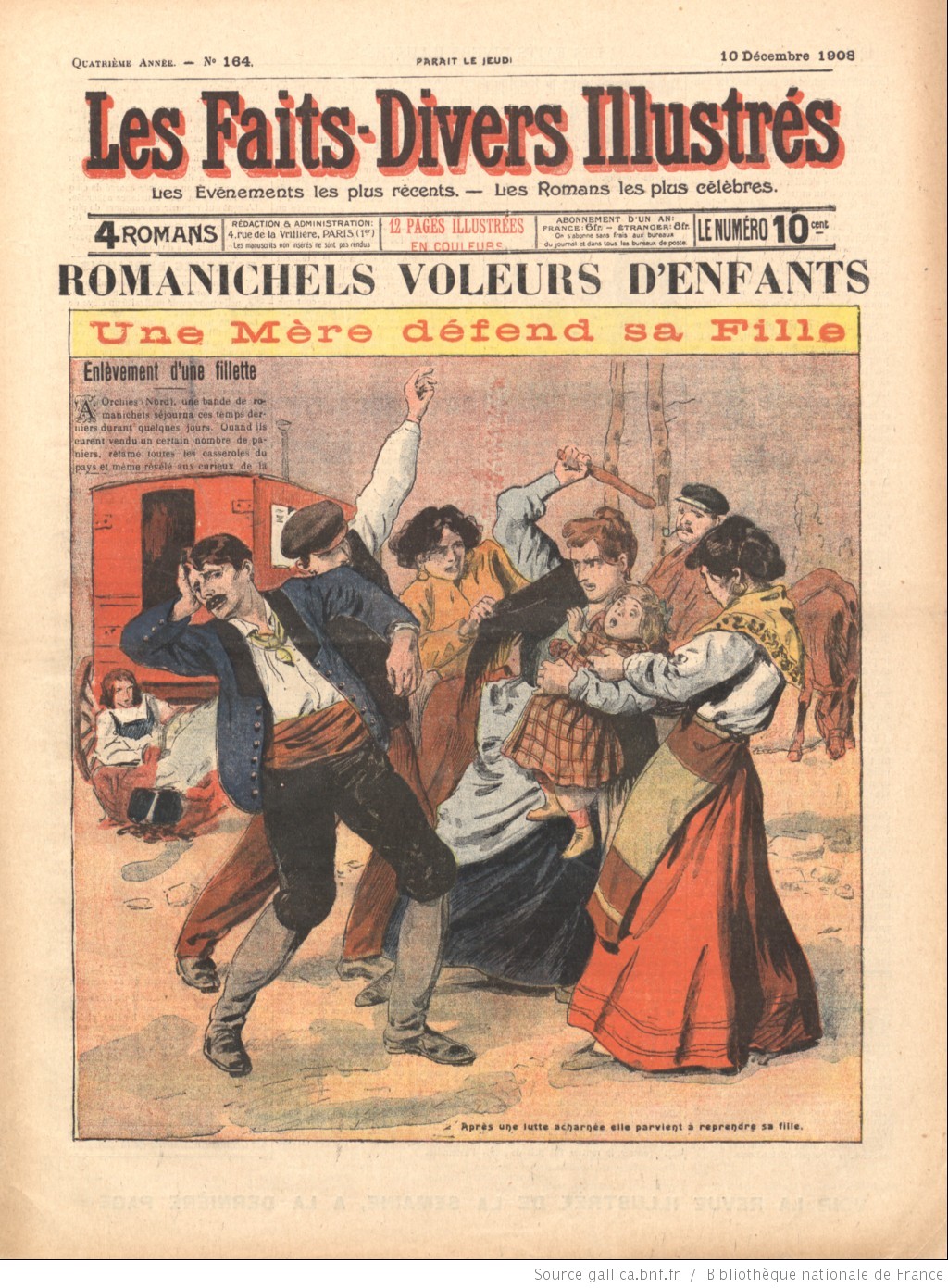 The caption translates as “Gypsies child thieves: a mother defends her daughter.” I have transcribed the corresponding article here. It tells that one morning, as gypsies had left a small town, a mother noticed the disappearance of her 3-year-old daughter.  She alerted people around her, then thought about the departed gypsies. Armed with a pole, she ran after them and saw her daughter at the front of a caravan. She snatched her and fought off the gypsies with the pole. Meanwhile, townspeople who had followed her arrived, accompanied by policemen; the latter had to use their authority to prevent people from lynching the gypsies.

Le Petit Journal was a daily published between 1863 and 1944. Politically, it was republican (in the French sense), conservative and nationalist; in 1937 it became the mouthpiece of a fascist party. Between 1884 and 1937 it published an illustrated weekly supplement. Part of the collection of the weekly supplement has been digitized by Gallica, and the website Cent.ans has an almost complete collection of the front and back covers between 1890 and 1930, often with a transcription of the corresponding articles.

The first image, downloaded from Gallica, can also be found—with different colours and contrast—on Cent.ans and on Wikimedia Commons (where it is credited to the Musée d’Histoire de la Ville de Luxembourg). The caption translates as “Child abducted by nomads.” I have transcribed the corresponding article here. Antoinette Mirguet, a 10-year-old girl, was going to school, when she was called from a caravan. As soon as she entered it, the man made the horse start. She screamed, but she was threatened with a knife. Approaching the German border, a brave vine grower heard the girl’s screams, and he warned the nomads that he would split their heads with his spade if they did not release their prisoner. Intimidated, they released her, and her savior could bring her back to her parents.

This second image, also downloaded from Gallica, can be found on Cent.ans with the transcription of the corresponding article. Calling for an “energetic law” against vagrants, it tells how a gang of nomads assaulted a 11-year-old girl who was going back home from school, taking her to a caravan. But she resisted bitterly and screamed desperately, so that the Roma had to abandon her and flee.

This third image comes from Cent.ans. I do not have the corresponding article. The caption, titled “A caravan went by…”, tells that a 9-year-old girl was playing when she was abducted by a Rom, tied up and gagged, then brought into his caravan, which departed. But the child managed to escape.

In this collection I also found several images about Roma girls, with a quite different tone. The following one comes from Cent.ans. I do not have the corresponding article. The caption tells that a little Roma girl was going to her parents’ caravan with a basket full of fish. Then wild cats, attracted by the smell, attacked her and disfigured her. Readers will notice that no mention is made about rescuing her.

The next image, downloaded from Gallica, illustrates the theme of Roma teenagers being precocious criminals: “A farmer woman attacked by Roma.” The corresponding article (with the image) is found on Cent.ans. It says that two “impudent daughters of Bohemia,” “Roma of pure race,” were begging for food. As the farmer woman said she had no food to give them, they assaulted her. Her screams attracted her husband and a hunter. The two Roma escaped but were afterwards arrested and jailed. They were aged 15 and 17. The article ends by calling on the State to address the “scourge” of people without regular home or employment.

There is also an image and an article (in No. 877 dated 8 September 1907) about Roma releasing a bear in a sheep enclosure, together with a longer one about the origin and customs of the Roma people, repeating the usual stereotypes mixing the fascination for their picturesque life with their labeling as “lazy” and “born criminal”.

The child abduction libel against Roma is also found in “children’s songs” or “nursery rhymes,” which were told to children to warn them against approaching Roma. The following one is famous in the English-speaking world:

My Mother said, I never should
Play with the gypsies in the wood.
If I did, she would say;
‘Naughty girl to disobey!

Your hair shan’t curl and your shoes shan’t shine,
You gypsy girl, you shan’t be mine!’
And my father said that if I did,
He’d rap my head with the teapot lid.

My mother said that I never should
Play with the gypsies in the wood.
The wood was dark, the grass was green;
By came Sally with a tambourine.

I went to sea – no ship to get across;
I paid ten shillings for a blind white horse.
I upped on his back and was off in a crack,
Sally tell my mother I shall never come back.

These accusations repeated for centuries rest on nothing. Thomas Acton, Emeritus Professor of Romani Studies, University of Greenwich, clearly stated: “I know of no documented case of Roma / Gypsies / Travellers stealing non-Gypsy children anywhere.” In a letter to Dennis Marlock dated August 2nd, 1990 (quoted by Ian Hancock), he wrote:

Compared with the massive record of murder, theft, kidnapping and other crimes by non-Gypsies against Gypsies throughout history, Gypsy crime against non-Gypsies pales almost into insignificance, so that to prioritize the study of the latter over the former shows a twisted sense of values.

To finish, readers who want to learn more about the history of the persecution of Roma in Europe, can watch the Holocaust Living History Workshop video Porrajmos: The Romani and the Holocaust with Ian Hancock, produced by University of California Television.

8 thoughts on “The Abducted Girl in Anti-Roma Imagery”