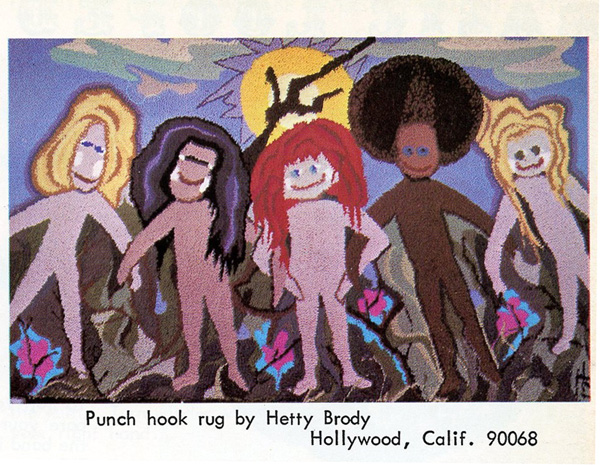 When I was cleaning my parent’s basement a few weeks ago, I came across a book of rug designs in which I found this charming Children of All Nations rug. Little information was given about it other than it was a punch hook by Hetty Brody of Hollywood California. The book of rug designs was published in 1972, the rug certainly reflects the spirit of the time. The image of children of different races holding hands appears to be inspired by Martin Luther King’s famous “I Have a Dream” speech. It seems appropriate to consider this rug due to the current racial tension after the fatal shooting of an African-American man by a Louisiana police officer. Many sociologists believe that racial tension is approaching a point of the street riots that swept urban American in the late 1960s.

When I discovered the rug, I admired the optimism of the image of nude girls but realize such a spirit can hardly be found today. Why is it so? There’s an atmosphere of skepticism today. The Australian philosopher David Stove called the epistemological gloom “cognitive Calvinism”; Stove observed, “Calvinists believe in the total depravity of human nature: if an impulse is one of ours, it is bad, because it is one of ours.” A cognitive Calvinist in contrast to a religious Calvinist, is one who has no faith in God but still presumes all motives are of self-interest even if actions may appear outwardly good. Contemporary thought operates along these lines of skepticism of intent. Traditional literature and works of art are deconstructed to expose the supposed hypocrisy behind the humanist ideals expressed in the works. Many postmodernists dismiss the notion of universal human qualities and values as an oppressive construction, and if so, why not deconstruct this text?

I say to you today, my friends, so even though we face the difficulties of today and tomorrow, I still have a dream. It is a dream deeply rooted in the American dream.
I have a dream that one day this nation will rise up and live out the true meaning of its creed: ‘We hold these truths to be self-evident: that all men are created equal.’
I have a dream that one day, down in Alabama, with its vicious racists, with its governor having his lips dripping with the words of interposition and nullification; one day right there in Alabama, little black boys and black girls will be able to join hands with little white boys and white girls as sisters and brothers.
I have a dream today.

Our society is falling apart due to “cognitive Calvinism”, the presumption of the total depravity of human nature, the idealism found in the 1960’s is greatly needed. No society can function based on distrust. This is why I have come to love images of this kind, it is the very antithesis of our “Orwellian” culture. The irony is, I find that people who have a traditional religious background tend to be open-minded to images of nude children because they still respect the idea of innocence. I have good reason to believe the current state of self-consciousness is due to the “hermeneutics of suspicion”, where things are not accepted at face value. Most feminists presume images of beautiful females are some form of sexploitation. This ideology has atomized society, which I have reason to believe is intentional. The authors of anti-utopias predicted that authoritarianism would intentionally break the ties of the family. The only solution I see is a return to romantic idealism which recognizes how industrialization has alienated the perception of life. 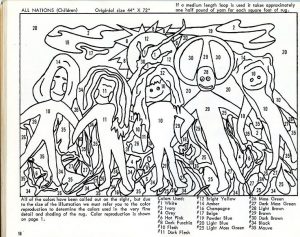 Children of All Nations pattern (1972)

5 thoughts on “Children of All Nations”