Harold Cazneaux is one of Australia’s iconic photographers and is widely considered to be the creator of Australia’s pictorial photography genre. His works appeared in the early twentieth century with cityscape, industrial and landscape photography dominating his portfolio. However, portraiture is also a significant feature and with the addition of the family album images he is a good subject for this website. 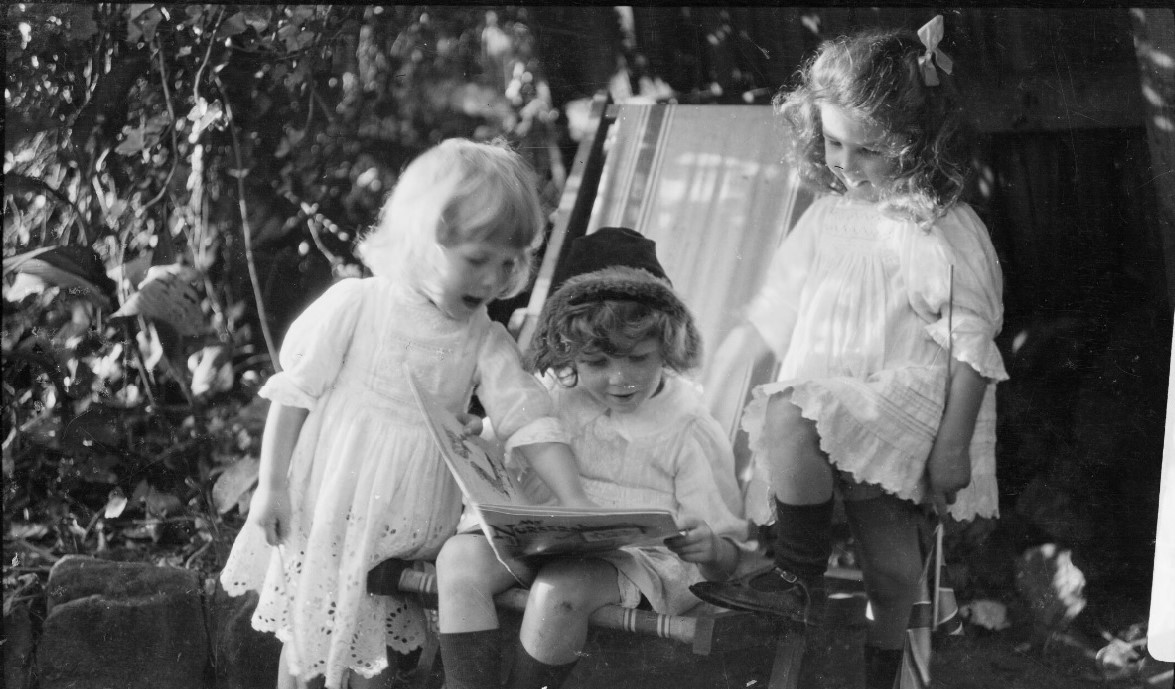 Harold Pierce Cazneaux (1878–1953) was born in Wellington, New Zealand, to Pierce Mott Cazneaux and Emma Florence Cazneaux. Due to a financial depression that was occurring in New Zealand, the family moved to Adelaide, Australia in 1888. Unfortunately, they found the same problems in Australia. Both parents worked in the photography trade so it would seem inevitable that Cazneaux would become a photographer himself. In 1896 the artist’s father, who was director of Hammer and Company, gave him his first job and he spent his working days as an artist and image retoucher. While employed there the photographer met his future wife, Winifred Hodge, whom he married in 1905 and they had six children. 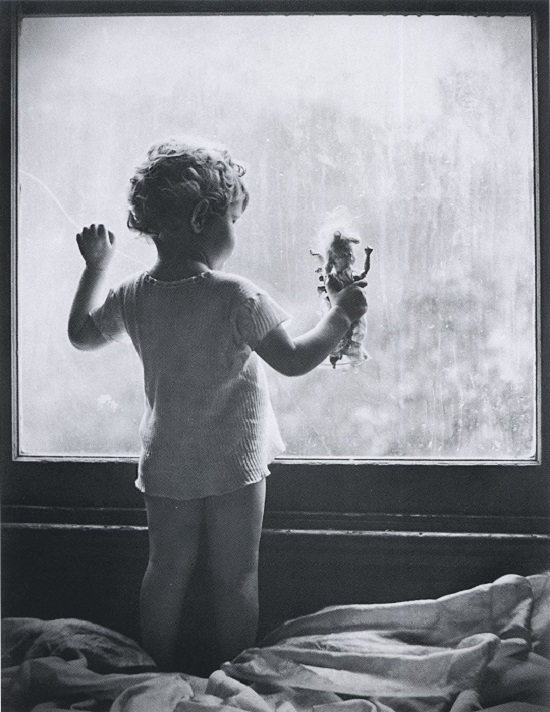 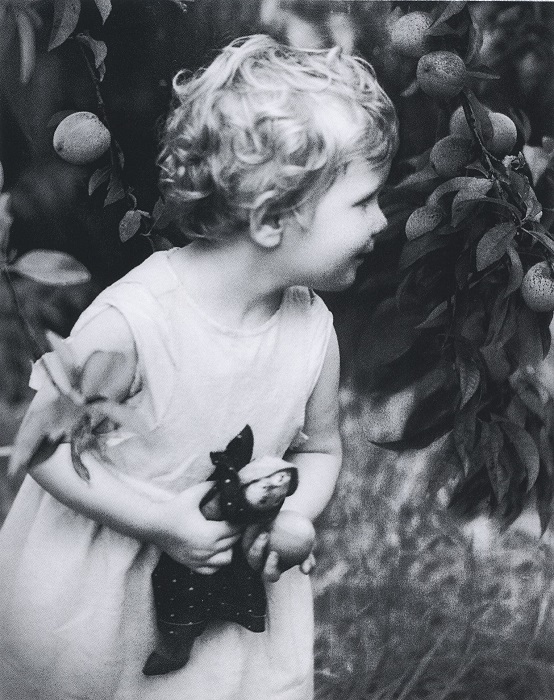 The photographer was first inspired to shoot pictures after visiting an exhibition entitled ‘Pictorial Photographs’, which featured the work of Jack Kauffmann among others. In order to pursue his career, he moved to Sydney in 1905 where the art society was larger and more established. While in Sydney he worked as an artist and image retoucher for Freeman and Company. The artist bought his first camera in the same year and started to take portrait photographs of friends and relations he was living with. At this time he was also photographing the harbour and city of Sydney, as well as documenting the lives of the people who inhabited the city. Cazneaux could do this as he travelled to work by ferry then walked to the office, thus allowing him to wander the streets, find the right subject and wait for the right moment to create a photo. As he created his art, he photographed local history and because of this the images are treasured today. 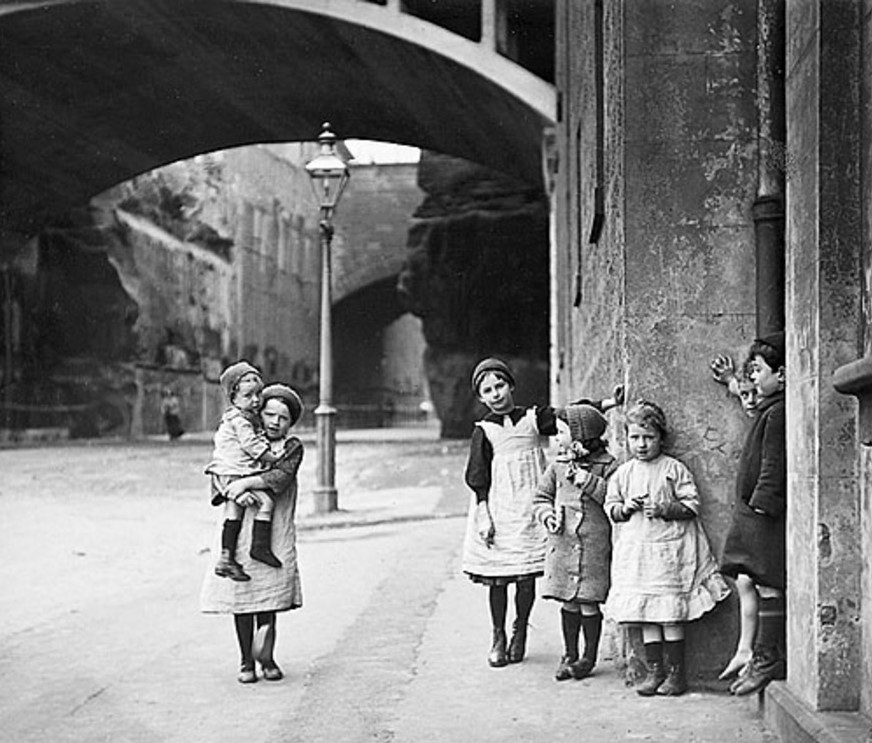 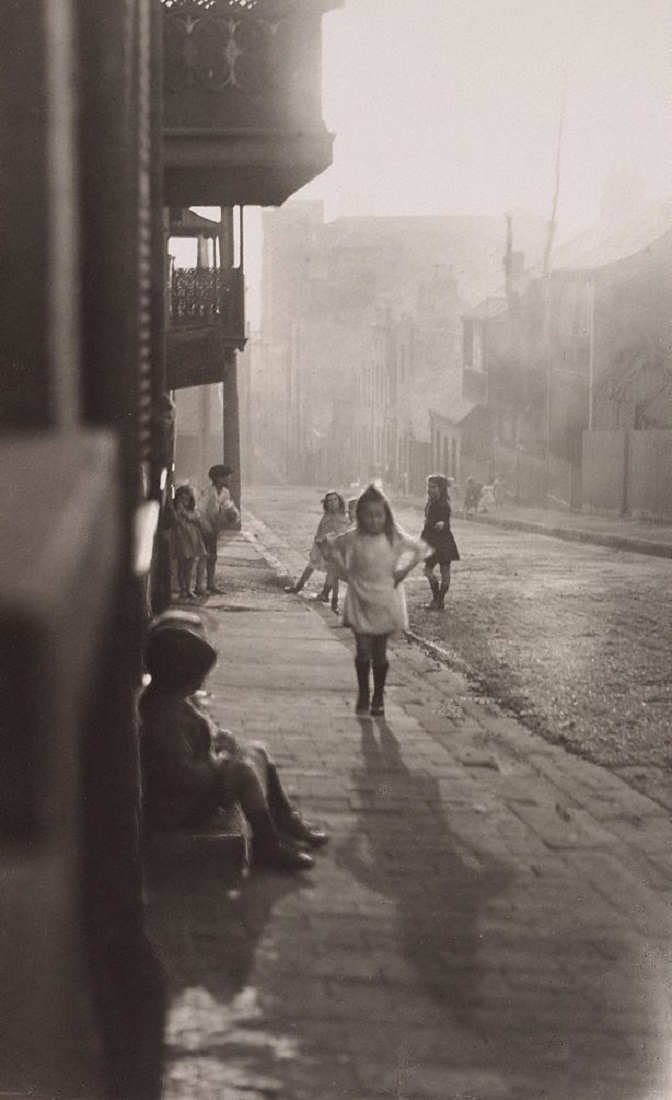 As a way of escaping conventional studio work and giving himself the ability to experiment with photography, Cazneaux joined the Photographic Society of New South Wales in 1907. There he gained access to their darkroom and could increase the number of images he was creating.  He also spent time lecturing and demonstrating photography to other members. The photographer would become director of the Society in 1917. Two years later the Society invited him to mount a one man exhibition. When talking about the exhibition in the book The Story of the Camera in Australia, Jack Cato wrote,

This was Australia’s first one man show… one of the milestones in the history of photography in Australia… It lifted photography to a new plane. The press, the critics and the artists acclaimed it. There for the first time they wrote of “the art of the camera” … “the great artistic possibilities of photography”

For the artist this acceptance of photography as a distinct art genre was more important than personal recognition. The exhibition also gave him international recognition, which resulted in his first overseas show held two years later at the London Salon of Photography. There he received more accolades and recognition with one reviewer making a direct comparison to Alfred Steiglitz’s photographs of New York City. By 1914 the artist had four daughters, who were featured in many of his pictures. One such image, Waiting Up for Daddy, was entered into The Kodak National Photography Competition and ended up winning first prize. The image has also come to be one of the photographer’s most recognised. 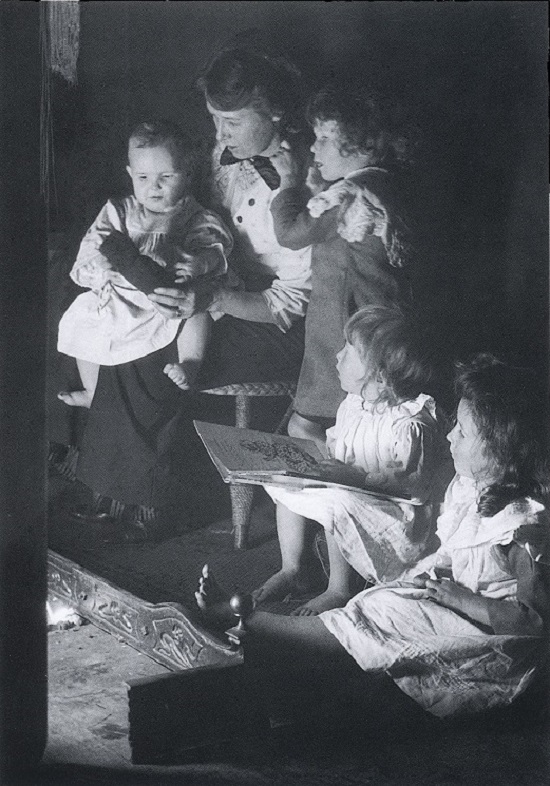 Cazneaux did not like the direction or ideas that the Australian art scene had at this time, so in 1915 he set up the Sydney Camera Circle. The camera circle wanted to embrace the Australian light and landscape rather than the darker, staged and European-inspired imagery that dominated Australian photography at the time.

The year 1918 was a year of change in the photographer’s life. For nearly twenty years he had been trying to balance the demands of commercial photographic work with the freedoms of his own personal work, which caused him much distress. The situation got worse when his employers attempted to legally bind him to the studio, preventing him from doing work outside of the business. As a result, he had a nervous breakdown and left Freeman and Company. The breakdown lasted almost a year until a friend, Cecil Bostock, lent him his studio; he was in Europe documenting the war. The artist could now create the images he wanted and he advertised his artistic photography and natural portrait services, which continued throughout the rest of his life. 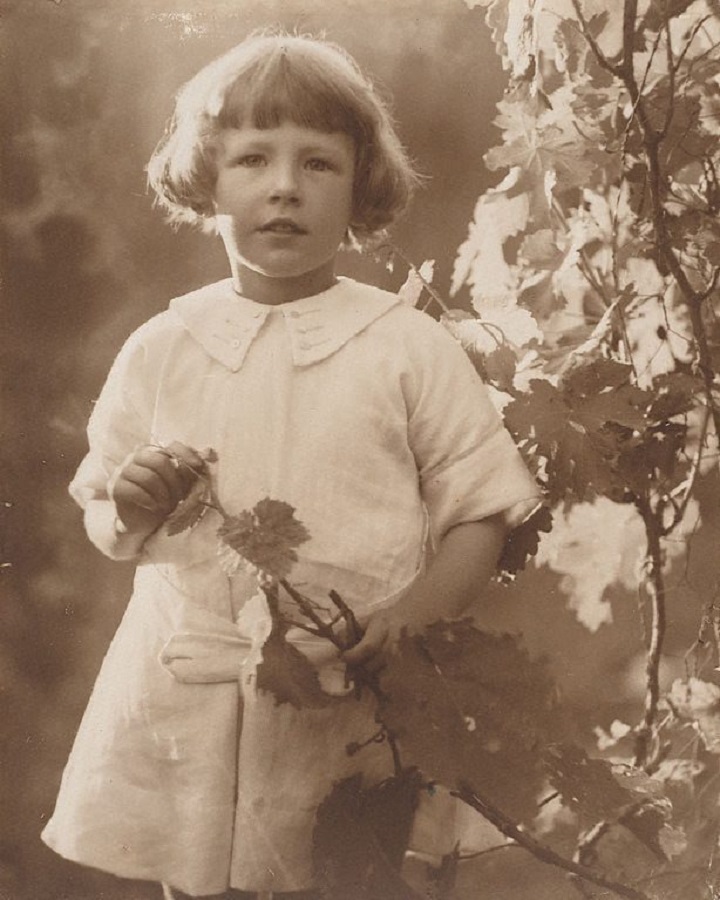 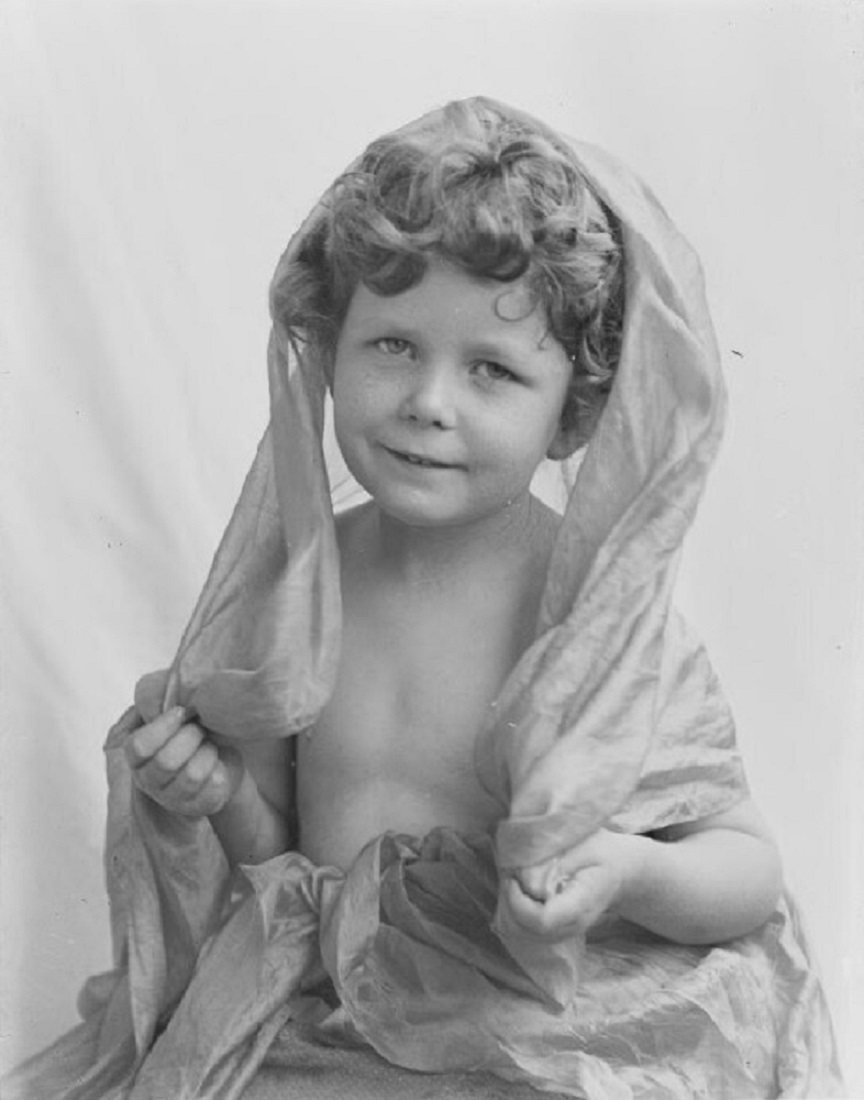 The first commission he received, since his independence, came in the same year. The contract required him to produce a portfolio of images documenting the Prince of Wales’ visit. Soon after he had to vacate the studio and reestablished it at his home. When Sydney Ure Smith was developing a new magazine, The Home, he remembered Cazneaux’s work and approached him to become the official photographer. He accepted and his pictures dominated the magazine from its inception in 1920 till its closure in 1942. The work was multifaceted, from making portraits of the interviewees to photographing the interior and exterior of homes. Additionally, he supplied art prints for the magazine, one such print was The Bamboo Blind that was the frontispiece for the first edition. With six children, the photographer could also provide the clothing advertisements for the magazine; an example is displayed below. 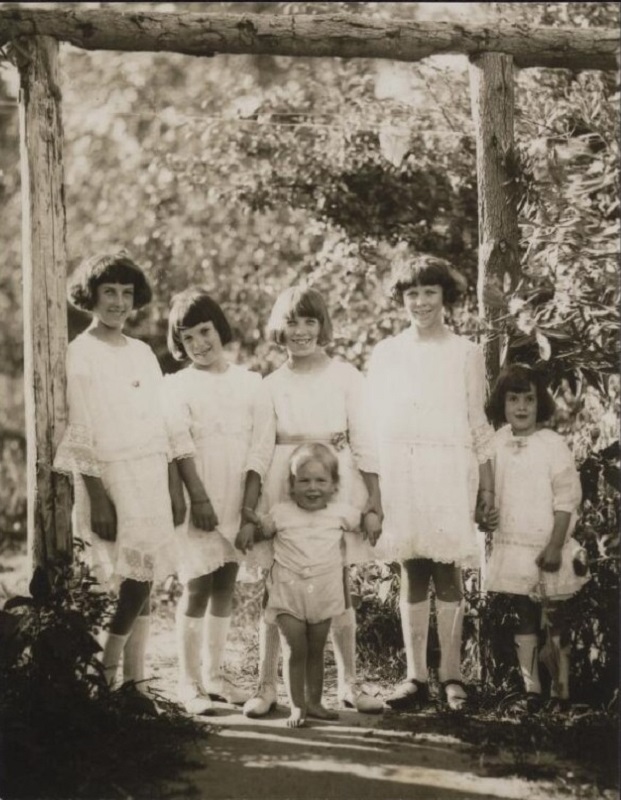 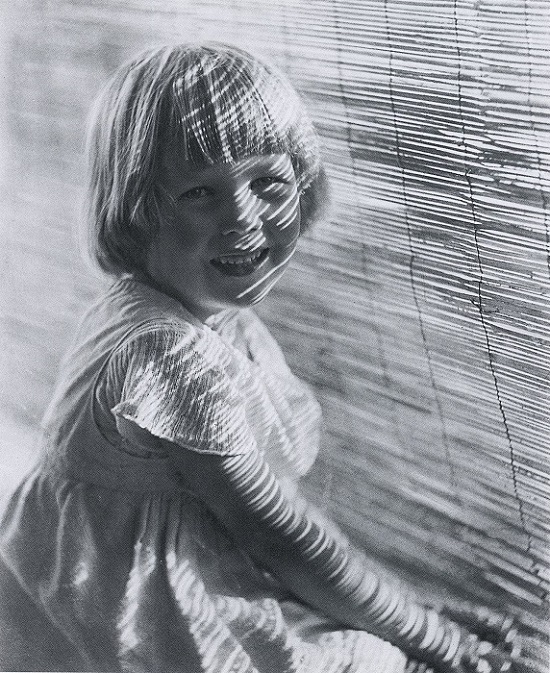 Cazneaux’s work for The Home magazine was well known and this brought in many other commissions. He travelled across Australia photographing properties for Australian Home Beautiful magazine, with many of these images reappearing in the book Domestic Architecture in Australia. The artist contributed images to six other books during his lifetime: Sydney Surfing (1929), The Bridge Book (1930), The Sydney Book (1931) and The Australian Native Bear Book (1930). The book with subjects most relevant to this site is The Frensham Book (1934), which details the lives of the girls residing at the Frensham Girls School. There is also In the Persian Garden, an album which details the characters from the matinee ‘In a Persian Garden’, held at the Theatre Royal, Sydney, July 1922, in aid of the Children’s Hospital. 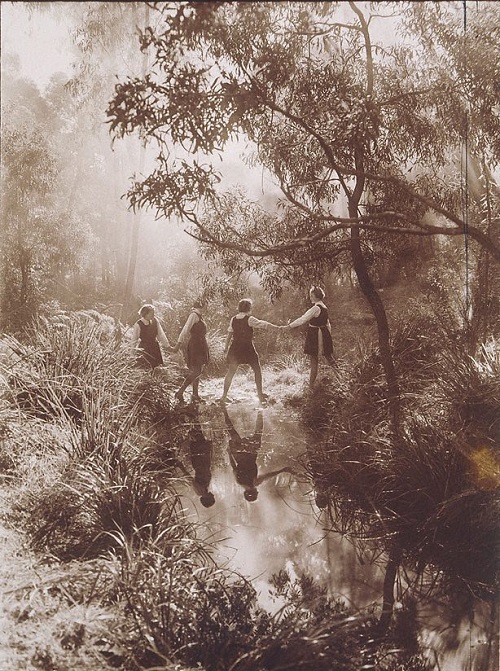 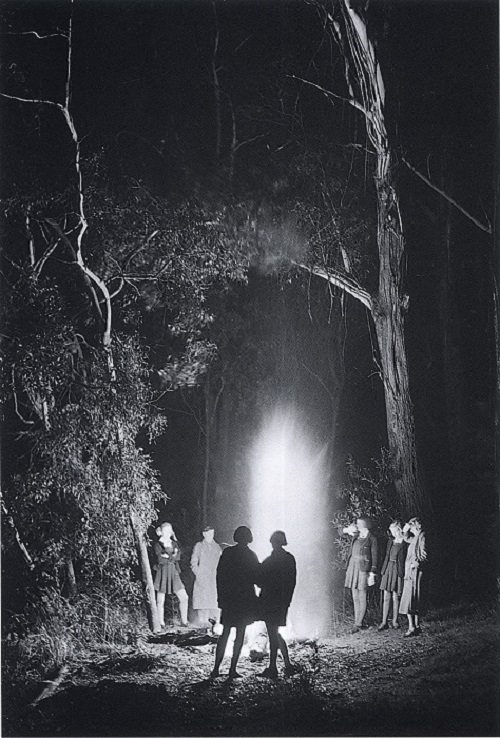 These activities kept Cazneaux active for the rest of his life and provided ample photographs for overseas group exhibitions. He supplied at least one image per year for the London Salon of Photography from 1911 to 1952 and was elected a member of the Salon in 1921. The photographer also supplied images to the Royal Photographic Society of Great Britain from 1908 to 1952 and was given an honorary fellowship in 1937—the first Australian to receive this honour. Due to his age, the artist reduced his work load back to strict portraiture in the 1940s and during the war years, the artist would focus on photographing soldiers and their families.

Cazneaux’s images of cityscapes and landscapes, including his iconic image The Spirit of Endurance can be seen at the State Gallery of New South Wales. If you have a spare day available, there are 1200 digitised images at the Trove website to look through, roughly 10% are his children’s portraits.