From roughly the late Victorian era to the early 1960s there was a pop art phenomenon known as pin-up art.  These could be paintings, illustrations or photos.  The images were generally very simple representations of attractive women, often scantily clad or even nude, and posed erotically. Obviously these were aimed at men and adolescent boys and were intended to be pinned up in clubhouses, garages and the like (hence the name). Among the more prominent artists in this field were Alberto Vargas, Art Frahm, Gil Elvgren and George Petty, but a ton of artists produced pin-up art, some of them quite skillful. Among them was one Edward D’Ancona.

Not much is known about D’Ancona.  The bulk of his work as a pin-up artist was produced from the mid ’30s till the end of the ’50s, after which he apparently switched to more family-friendly fare, though not much of this later work seems to exist anymore, at least not on the web.  One piece that was, however, is presented below.  What’s particularly interesting about this painting is that “Miss Me” has the attention of everyone she passes, including the dog.  The policeman, meanwhile, looks to be directing sidewalk traffic, stopping the boy on the bicycle so that the little girl may pass by.

The boy himself is almost stunned by the sight of the girl, who flaunts her beauty as if she were born to it.  We can easily imagine this child growing up to become one of D’Ancona’s pin-up models.  Even at this tender age she recognizes the power that femininity has over males and attempts to assert her own premature version of it, arguably with some success.  One can argue that D’Ancona is presenting this situation as fairly harmless; this was made in the 1950s after all, well before the pedophile panic set in.  The girl may have a certain power over little boys, but the policeman simply finds her funny.  Or does he?  Is that a smirk of simple amusement on his face or something less innocent?  And what of the dog, who literally bows at her feet?  What exactly is D’Ancona attempting to say with this piece?  I wonder.

It raises some interesting questions, I think.  Such as, is there some subconscious level on which every adult recognizes the largely dormant (but by no means nonexistent) sexuality of children, and if so, do they use certain psychological techniques to deny it to themselves?  I think this is, indeed, the case.  One of those techniques is to laugh it off, to present children’s sexuality as ridiculous and inept, and in the hands of another artist (Norman Rockwell, for example) this same scene would’ve presented the girl as more of a caricature.  I’ve never been much of a Rockwell fan, incidentally.  But because D’Ancona’s style is more realistic than Rockwell’s, it may have backfired.  If he intended this scene as satirical, I think he failed.  But maybe he was simply unaware of what this piece might say to a 21st century audience, who is all too aware of, and acutely sensitive to, the sexual exploitation of children.  This seems more likely.  Today we know about the darker aspects of the beauty pageant world, and how our culture, whether deliberately or not, suggests to girls from an early age that their physical attractiveness is their most important asset.  D’Ancona, more than likely, saw nothing untoward in this scene, and I would be hard pressed to argue he was wrong.  But it does go to show how a changing society can recast old art in a new context. 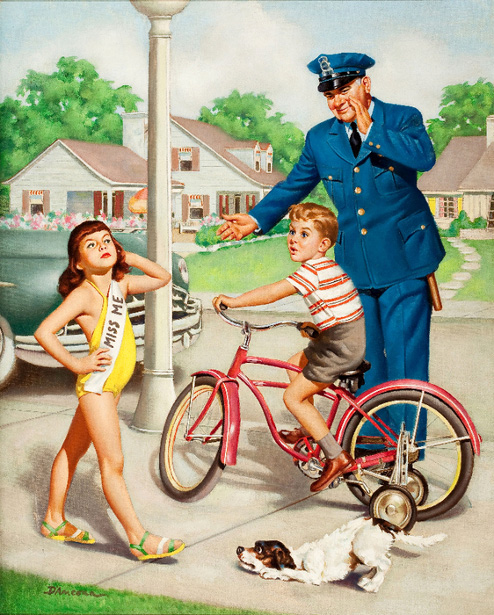 You can see plenty of examples of D’Ancona’s pin-up art here (from which this piece was taken) and here.  The second site also has some additional biographical information on the artist.