A child’s world is fresh and new and beautiful, full or wonder and excitement. It is our misfortune that for most of us that clear-eyed vision, that true instinct for what is beautiful and awe-inspiring, is dimmed and even lost before we reach adulthood. -Rachel Carson, A Sense of Wonder, 1965

The power of a single image is amazing, like the following odd but charming image found on a sales site. It came with no identifying information except that the face looming in the background was Helen Hayes. Being a famous actress, I figured there should be some clue to the photo’s history. One of our guest writers, Arizona, took the initiative and offered a treasure trove of leads which are the basis of this post. 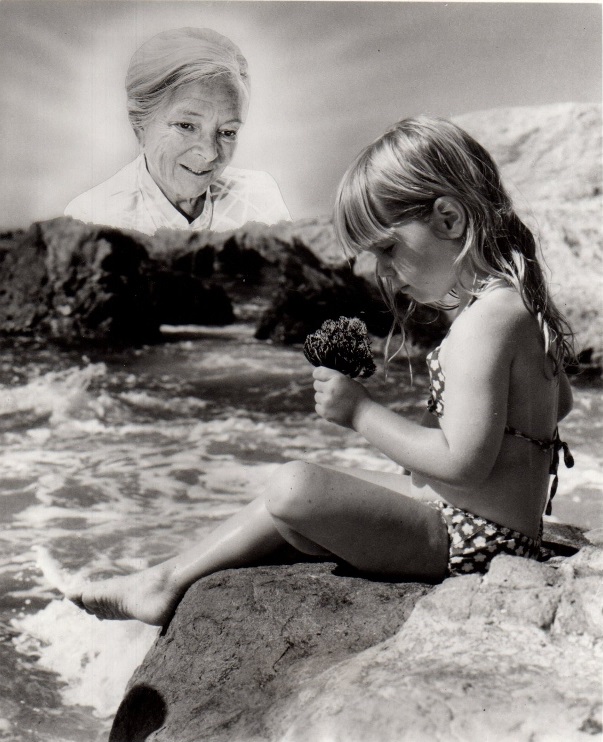 It turns out that it was a promotional shot for a special nature documentary to be aired on ABC in late 1968 called The Sense of Wonder. This film was a posthumous tribute to biologist, writer and environmental activist Rachel Carson (1907–1964).

Carson was born near Springdale, Pennsylvania. An avid reader, she also spent a lot of time exploring her family’s 65-acre farm. She started writing her own stories at eight and by age ten, was published in St. Nicholas Magazine. In her childhood, she was inspired by Beatrix Potter, Gene Stratton Porter, and in her teens, Herman Melville, Joseph Conrad and Robert Louis Stevenson. 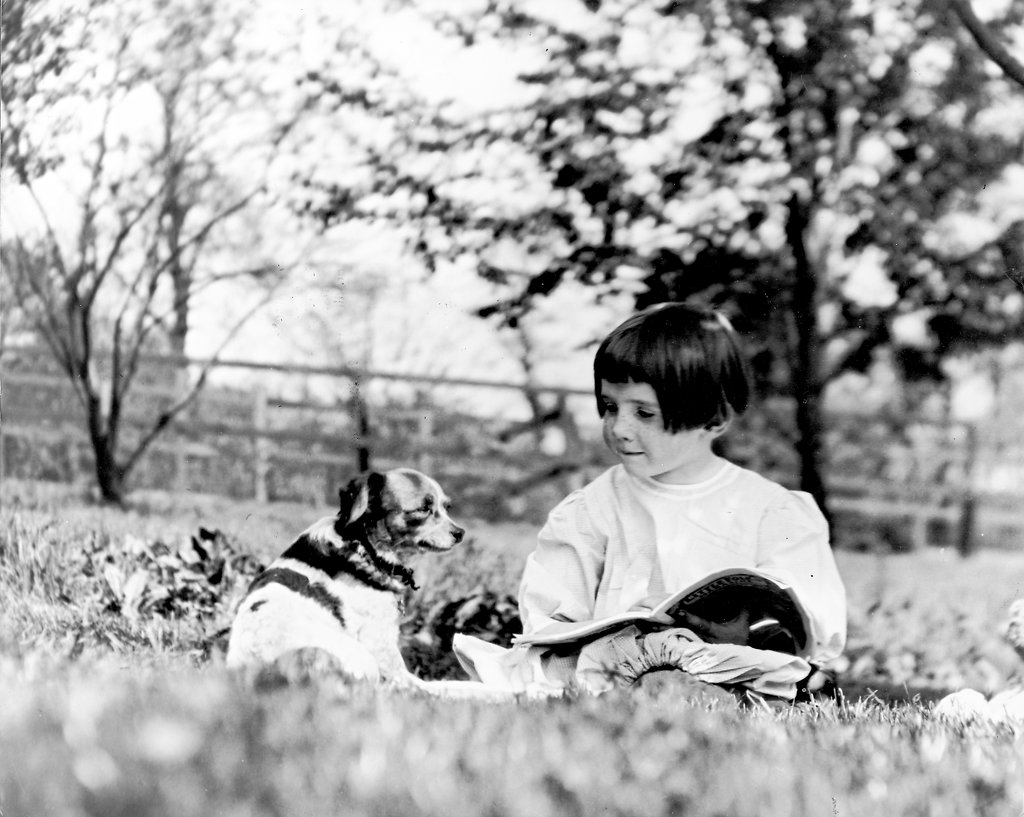 At the Pennsylvania College for Women (now Chatham University), Carson studied English then switched her major to biology in 1928, still contributing to the school’s student newspaper. She graduated in 1929 and did postgraduate work in zoology and genetics at Johns Hopkins University, earning her master’s degree in zoology in 1932. She intended to continue on to doctorate work, but the first of a series of family tragedies in 1934 forced her to find steady work to support her family.

She took a temporary position with the U.S. Bureau of Fisheries, writing radio copy for educational broadcasts focused on aquatic life, all the while submitting articles to newspapers and magazines. In 1936, Carson became only the second woman in the Bureau of Fisheries to be hired for a full-time professional position. Due to her skill at writing, she was encouraged to expand her various research articles into a book, Under the Sea Wind (1941). Carson continued with the Bureau (by then called the Fish and Wildlife Service) through the 1940s because there were few other naturalist jobs—money in the sciences was focused on technical fields during the advent of the nuclear age. During that time, she encountered the subject of DDT, a revolutionary new synthetic pesticide, but because editors found the topic unappealing at the time, nothing was published on the subject until 1962. Carson continued to move up the ranks in the bureau with its increasing administrative demands, prompting her to make a conscious effort to transition into full-time writing. By 1950, she published The Sea Around Us. Because of the success of this book and a reprint of Under the Sea Wind, she was able to break away permanently in 1952.

Her books were made into a screen adaptation in 1953, but she was displeased with the result and lack of creative control and never sold the film rights to her work again. Her third book, The Edge of the Sea (1955), focused on her special interest in the dynamics of coastal ecosystems. She had a special connection with the coastlines of Maine and she along with her closest friend, Dorothy Freeman, purchased and set aside some land for preservation they called the “Lost Woods.”

Another family tragedy gave Carson the responsibility of raising her orphaned 5-year-old nephew and she moved to Silver Spring, Maryland. For the rest of her life, she would focus on the overuse of pesticides, particularly chlorinated hydrocarbons and organophosphates. The result of her careful research in the subject led to her most well-known book, Silent Spring (1962). It was a pioneering piece and is credited with being to first to give public attention to environmental degradation caused by pesticides and industrial activities generally. To accomplish credible research, Carson took advantage of her personal connections with government scientists, who willingly shared confidential information. She attended FDA hearings on revising pesticide regulations, coming away discouraged by the aggressive tactics of the chemical industry and the insidious implications of financial manipulation. She also developed good working relationships with medical researchers investigating the carcinogenic effects of these compounds. The completion of Silent Spring was delayed because of Carson’s poor health and subsequent diagnosis with breast cancer in the early 1960s. After her dire prognosis, she arranged for her manuscripts and papers to be bequeathed to the new state-of-the-art Beinecke Rare Book and Manuscript Library at Yale University.

In 1965, Marie Rodell, Carson’s long time agent and literary executor arranged for the publication of an essay intended for expansion into a book: A Sense of Wonder. The essay exhorts parents to help their children experience the pleasures of contact with the natural world. Carson early recognized the importance of exposing children to nature and even wrote an article dedicated to the subject, Help Your Child to Wonder (1956). But it was only during the raising of her nephew that this idea came to the fore. After the publication of A Sense of Wonder, Jules Power, an executive producer of nature films for ABC took an interest in making a news special based on Carson’s work. The script, written by Joseph Hurley, was based on that essay and was supplemented with information from The Edge of the Sea. It was narrated by Helen Hayes and its two-year production brought cameramen to several locations in the United States, with special emphasis on the Maine and Florida coastlines. The film, The Sense of Wonder, was produced by Daniel Wilson, directed by Alan Seeger and aired in November 1968. The film also gave some coverage to nature photographer Ansel Adams, offering a west coast perspective. 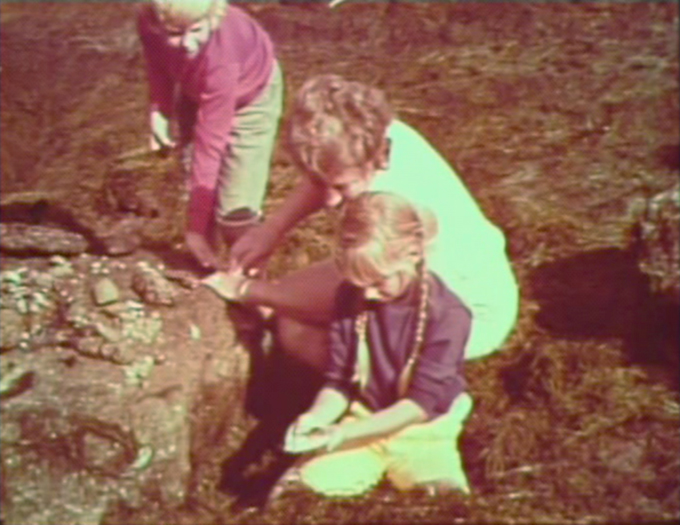 Carson understood the challenge of parents who have inquisitive children; they would never be confident about answering all their questions which might range from the microscopic world to the mystery of the skies. Her answer to such concerns was that attitude is much more important than knowledge.

If a child is to keep alive his inborn sense of wonder, he needs the companionship of at least one adult who can share it, rediscovering with him the joy, excitement, and mystery of the world we live in. -Rachel Carson, A Sense of Wonder, 1965

I sincerely believe that for the child, and for the parent seeking to guide him, it is not half so important to know as to feel. -Rachel Carson, A Sense of Wonder, 1965

Carson was also aware of the realities of city life for many children and encouraged them nonetheless to explore what nature existed there and to listen to the songs of birds and insects.

Although the film was innovative for its time, it is hard to recognize this with today’s highly-polished, big-budget nature documentaries. As a result, there are only a handful of neglected copies in university libraries in the midwest. You will notice how red the film still is—a consequence of celluloid that was not stored properly. It is ironic that a little girl was used to promote the film, because most of the scenes with children in the documentary showed boys. This may have been an unconscious bias of the producers, but I think Carson would agree that it is just as important to expose little girls to nature and science as boys.

1 thought on “Preserving a Sense of Wonder: Rachel Carson”