What is remarkable about Nick Waplington’s photographs is the special way in which they make the intimate something public, something that we, who do not know personally the two families photographed, can look at without any sense (or thrill) of intrusion. Countless photographs violate the intimate simply by placing it in the public context of a book, a newspaper, a TV slot. Yet others—like most wedding photographs—make the intimate formal and thus empty it of its content. -John Berger, Living Room, 1991

The first time I saw this artist’s work was in an issue of Aperture Magazine (#121, Fall 1990), a special issue about censorship called “The Body in Question”. The strange thing was that none of the articles referred to it so it was completely out of context. The issue discussed the uproar about photographing naked children and there were naked children in the image, but that was all. 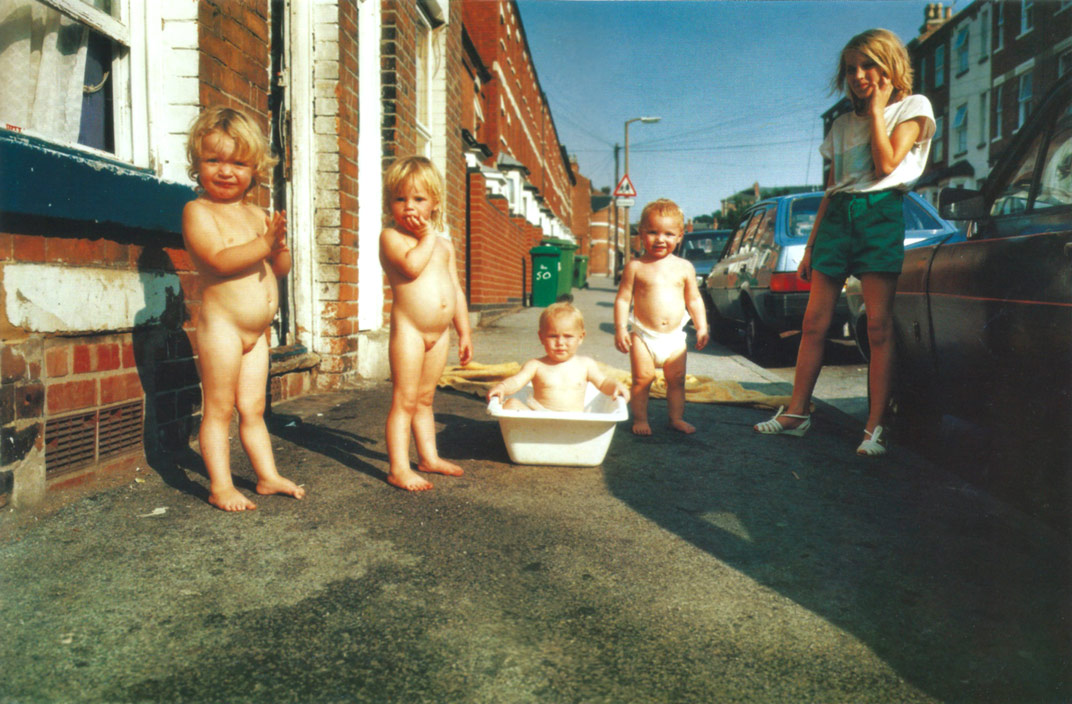 There was no indication that ‘Living Room’ was a vivid photographic exhibition about working-class family life or that it was being made into a book (Aperture Press, 1991).

Nick Waplington (born 1965) comes from Nottingham and has a strong connection with the people there but because his father was a scientist in the nuclear industry, he traveled extensively in his childhood. He studied art at West Sussex College of Art & Design in Worthing, Trent Polytechic in Nottingham and the Royal College of Art in London. Starting in 1984, Waplington made regular visits to see his grandfather in Aspley, Nottingham, photographing his immediate surroundings. The friends and neighbors of his family became his subject matter of choice. He continued with this work on and off for 15 years which yielded a number of series including the one that became his first published book. 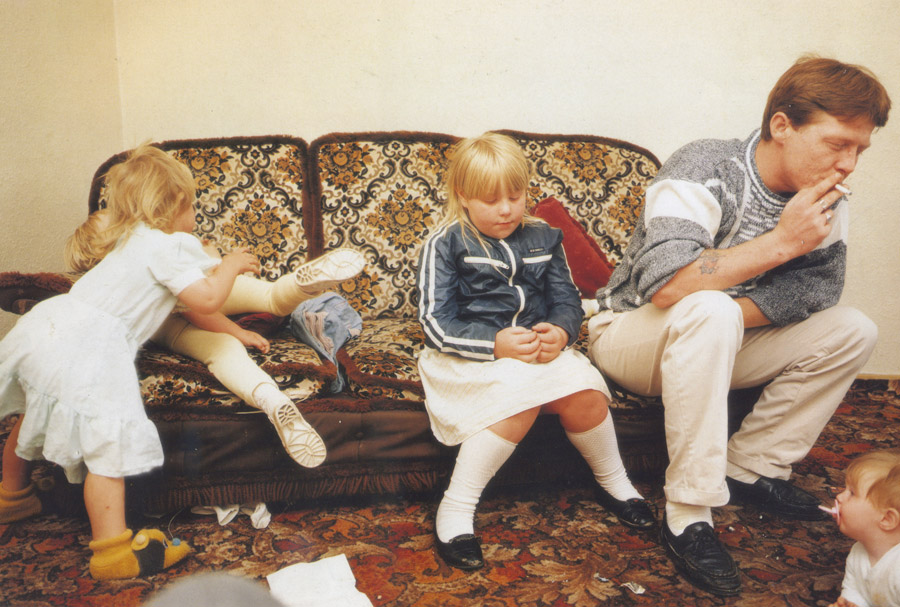 Among the pictures on the school table, I had found a thrilling color photograph by one of the students: three demonic little girls in plaid dresses, Hoovering the lawn. “Whoever made this photograph has found his eyes.” I said, “If he pays attention to the accident of what he’s done he can trust those eyes. There’s an entire body of work charted in this photograph—the life’s work of a completely original and powerful artist.” -Richard Avedon, Living Room, 1991 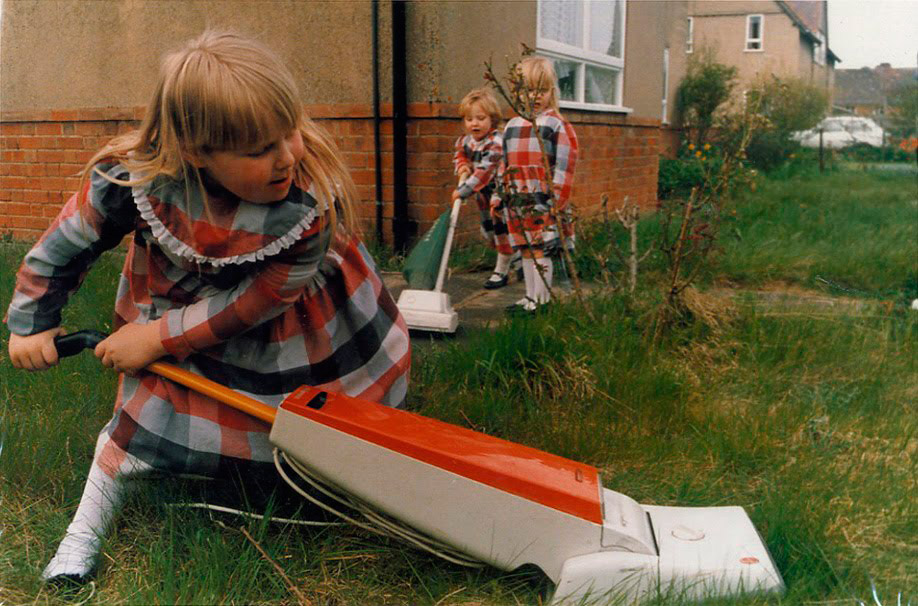 Avedon was half joking because, like Sally Mann, he knew full well that happy accidents do not occur on a regular schedule; he did not imagine that the rest of the photos in the box would maintain that standard. 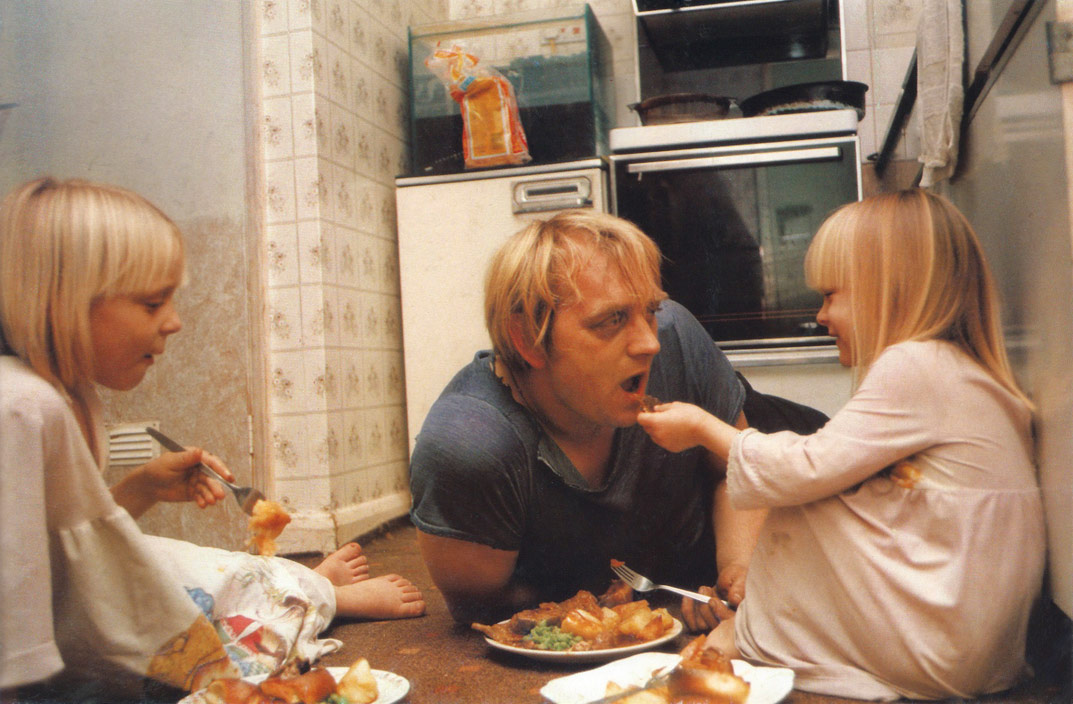 Living Room covers the lives of two neighboring working-class families in Nottingham over a period of four years and, in studying the images carefully, one can almost share the experience of the children growing up. Most of the shooting took place on Saturdays because that is when the families are at their most dynamic. No one has to go to work and there is a respite for indulging in the pleasures and dramas of family life. John Berger calls this series the photographic equivalent of Peter Paul Rubens’ work, because it is baroque in its composition and subject matter and perhaps a target of ridicule by stodgier members of the art community. There is an intense sense of intimacy; somehow Waplington has managed to put his subjects at ease to get off these shots. 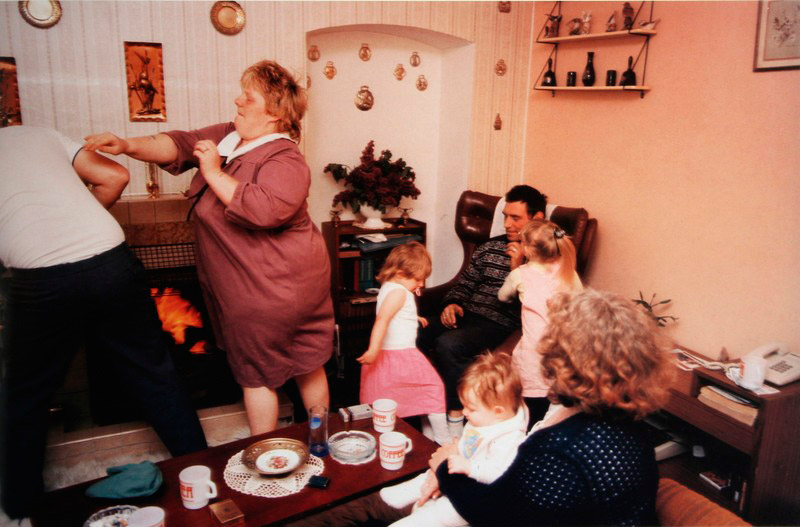 The logic behind the title is that the artist is where the action is, the places where family members are gathering and engaging. This could literally be in the living room or any other place where drama is playing out. If someone has a need for some privacy, they can leave the scene and know that Waplington will not follow. 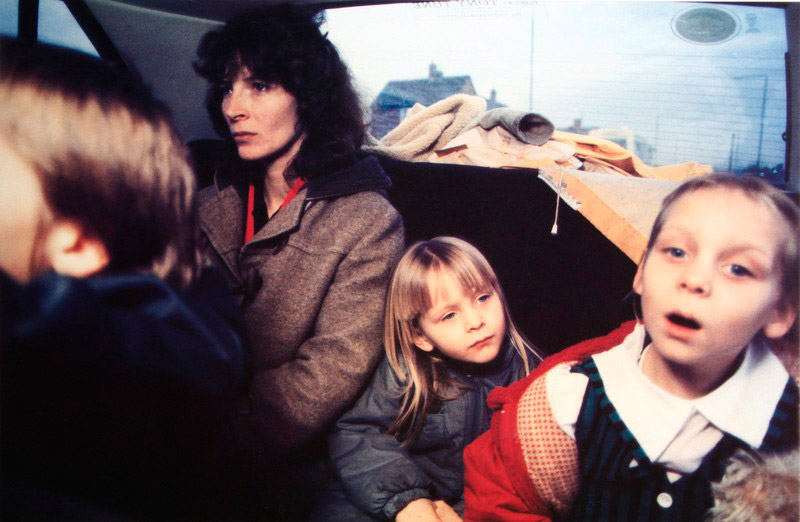 The photographer avoids the typical approach of a documentarian. He uses a 6×9 camera designed for panoramic shots, giving the images an epic quality. His low vantage point in the scenes gives the photos a feeling of immediacy as though they were being observed by a child. Waplington’s feet even appear in some of the pictures. By using these techniques, there is an impression of a real organic drama and the viewer is let in on the action. 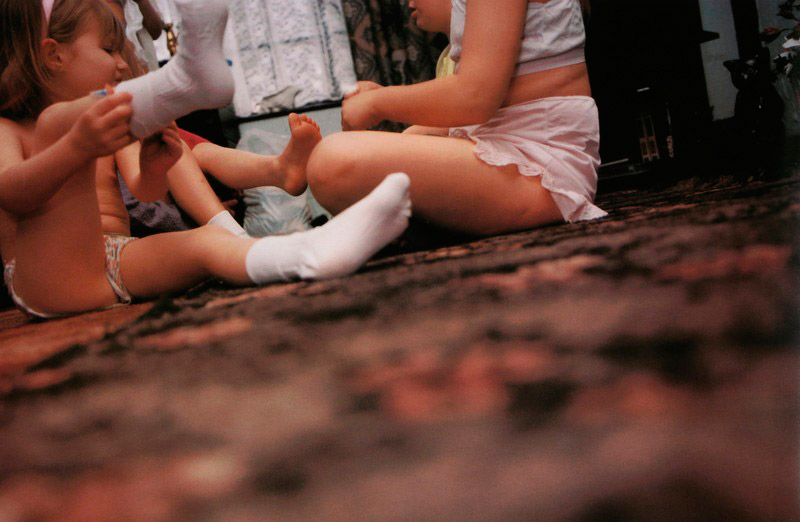 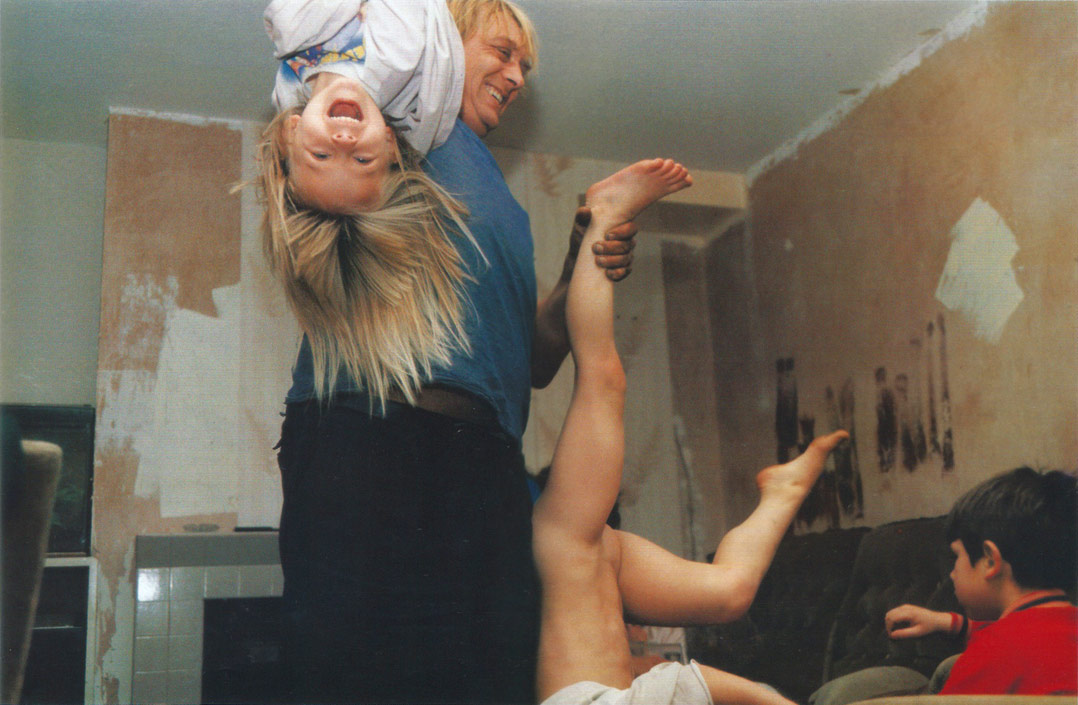 There are many excellent photographs not included in the book. Some were used for other series such as ‘Weddings, Parties, Anything’ and many were recently compiled in the book Living Room Work Prints (2016).  You can see a video which show a quick flipping through the book here. 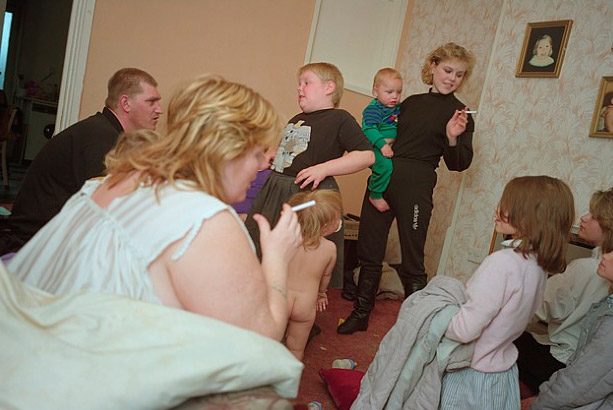 A subsequent book, Other Edens (1994) focused on more global environmental concerns in contrast to the intimate portrayal of the Nottingham residents. He continued his pseudo-documentary work with a bleak study of the Ecstasy drug culture in the mid-1990s and made a global road trip where the journey itself became the art. Another interesting project was a pictorial game illustrating the history of photography using the town of Truth or Consequences, New Mexico (named after the famous game show) as a backdrop. A 2002 work called Learn How to Die the Easy Way expressed his yearning for the artistic and commercial freedom that the web might offer.

If, as I suspect, the Internet has broken the stranglehold of governments and large media corporations on mass communication, then we could be in for a very exciting period of development on a number of different levels. Would a breakdown of current modes of social, moral and political cohesion be too much for a man to ask for? -Nick Waplington, 2002

One can only hope. You Love Life (2005) is a pictorial taken over a 20-year period and made into an autobiographical narrative. Waplington collaborated with Miguel Calderon to produce graphic novels and fashion designer Alexander McQueen for a work illustrating the processes of both designers and artists. The artist also experimented with a print-on-demand service to test alternatives to the increasing costs of producing photobooks.

Thanks go to the Academy of Art University Library for generously sharing their copy of Living Room, without which, this post would have required an expensive purchase.