Pixie O’Harris MBE (1903–1991) was born Rhona Olive Harris in Cardiff, Wales. She was the sixth of nine children born to portraitist George Frederick Harris and Rosetta Elizabeth Harris (née Lucas). It was her father, who was chairman of the Art Society of South Wales and a frequent exhibitor at both the Royal Academy and Walker Art Gallery, that encouraged her and her siblings to take up art as a hobby. The artist became a member of the Royal Art Society of South Wales and started to exhibit her work there from the age of fourteen. At the time, she was still signing with her birth name of Rhona Harris. 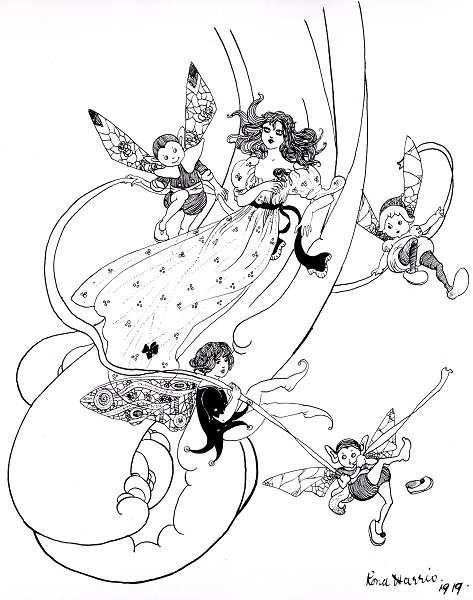 The artist’s family emigrated to Australia in 1920 and while en route to Perth she was frequently called “The Welsh Pixie.” Having a dislike for the name Rhona and thinking that a new name would go well with a new life, she changed her name to Pixie O. Harris. After arriving in Perth, she found temporary employment in an advertising agency colouring slides and drawing fashions. During her spare time, she continued to draw and took some drawings to local art galleries. The Perth Royal Art Society recognised her talent and allowed her to hang some of her drawings in the gallery.

After only six months in Perth, the family relocated to Maroubra, in Sydney, by which time the artist had amassed a large number of drawings. She took her drawings to the editor of the Sydney Mail magazine, produced by the Sydney Morning Herald, who paid forty pounds for thirty of the images.  Reportedly, a printer at the magazine saw the artist’s signature and mentioned, “You can’t have a name like that without an apostrophe after the O.”  The printer then added the apostrophe and Pixie O. Harris became Pixie O’Harris. While on a trip to Sydney she became friendly with a man whose father had contacts with people working at John Sands, a printing firm. The firm liked her drawings, hired her and she started producing advertisements. In order to improve her artistic skill, her employers decided to send her to the Julian Ashton Art School, paying her tuition. During this time she was also producing book plates.

After a year at this job, O’Harris quit and joined her father at his studio. As she was now well known, she freelanced for various magazines including The Triad, Green Room and The Bulletin. She also drew illustrations for theatre programs, comics for joke blocks and continued to accept commissions for advertisements. 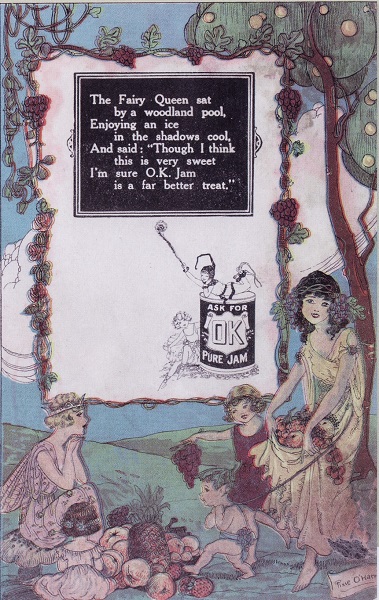 Her first assignment to illustrate a book was Cinderella’s Party by Maud Renner, published by Rigby in 1922 for which she was paid two guineas per image. Two years later she was asked to illustrate The Lost Emerald by Agnes Littlejohn. 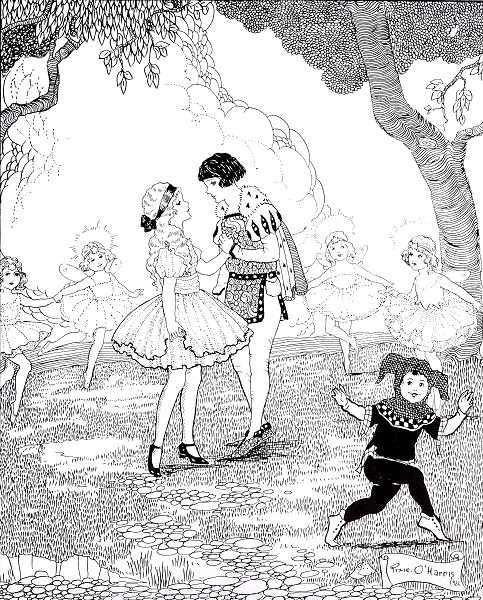 Her father’s death in 1924 had such an unsettling effect on the artist that she decided to leave the city and ended up in the Burragorang Valley. There the artist spent many days perfecting her skills at drawing flora and fauna. 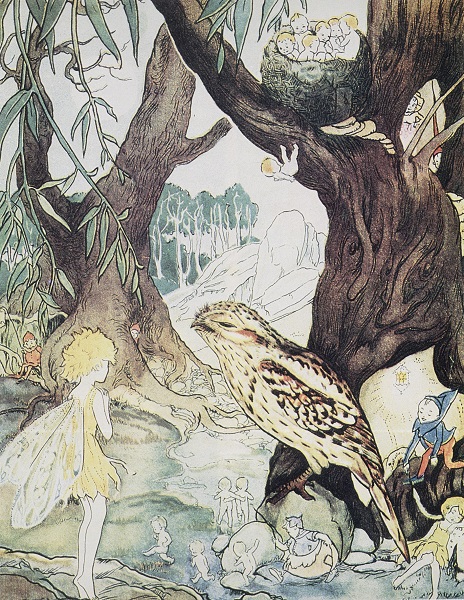 Upon returning to Sydney, the editor of The Triad commissioned her to caricature well-known personalities which took up most of the year and became some of her most recognised work.

In 1925 the artist published The Pixie O’Harris Fairy Book which was a book of short stories and verses interspersed with illustrations which became one of her most popular books. 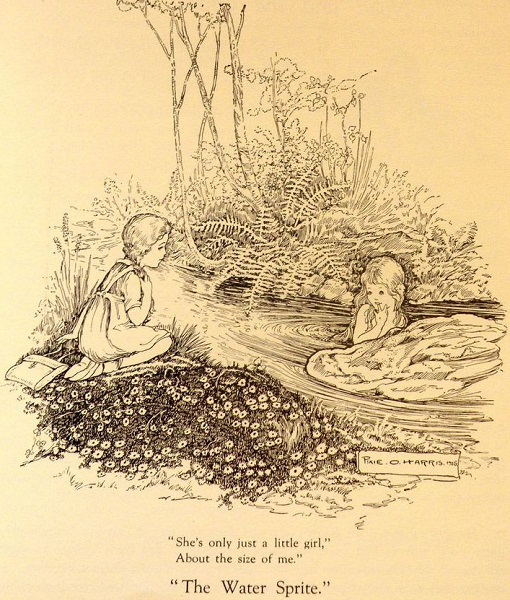 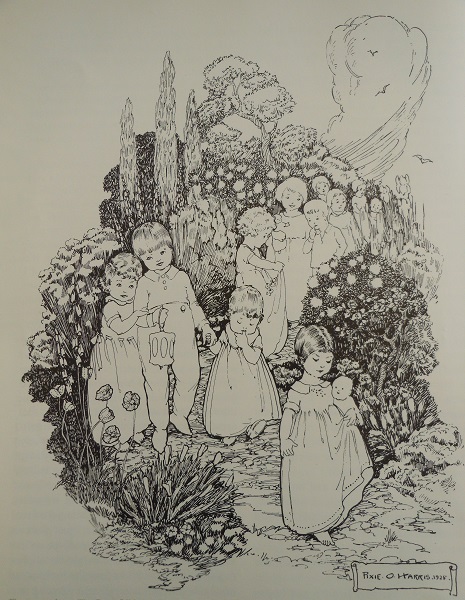 After finishing her work on the book, she continued her freelance work at The Triad where she drew images for the children’s pages as well as an occasional cover. However, the artist believed this position lacked security and decided to become a fashion artist for the Horden Brothers Department Store. She developed a different drawing style at that job and it helped refine her drawing of adults.  Prior to this, a lot of her images featured children or toddlers so some of the adults ended up with a childlike appearance. She continued with this job for three years.  It was during this period that she met a wool buyer named Bruce Pratt and married in 1928, initially quitting her jobs to stay at home. She subsequently gave birth to three daughters.

During the Depression in Australia, she rented an office in the city and set up an art studio. Her sister, Pat, was employed as her errand girl and occasionally collaborated with her on contracts. The enterprise prospered and soon the artist was working for the Woman’s Weekly and New Nation magazines. All the while she was still doing fashion work for Horden Brothers. Also notable during this period were the several colour covers produced for Woman’s Budget magazine and the caricature-based drawings for their series “Pictures of the Near Great” published weekly. 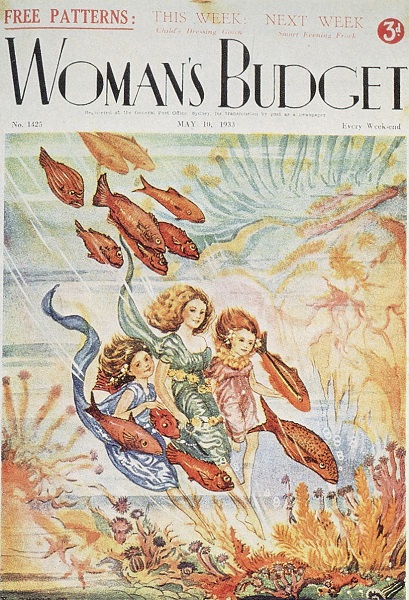 With all these commissions coming in, O’Harris’ artistic ability became a mainstay in the commercial arts. In 1934 she received another commission to illustrate her fourth book, Hundreds and Thousands by Ruth Bedford. She enjoyed this work and so started work on the book Pearl Pixie and Sea Greenie (1935), a story about two rock sprites. The book sold well and was reprinted four times. 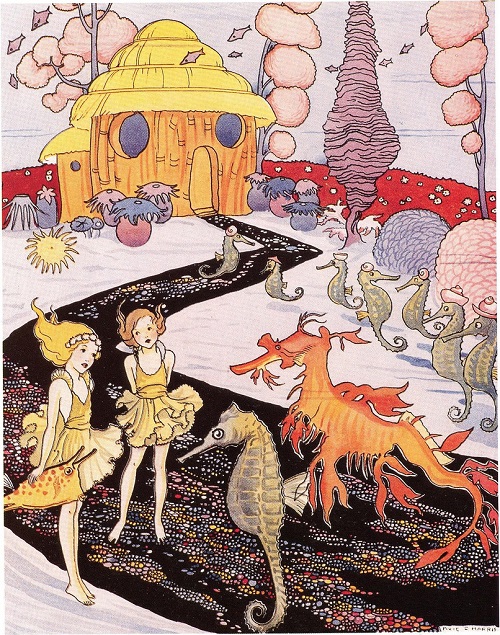 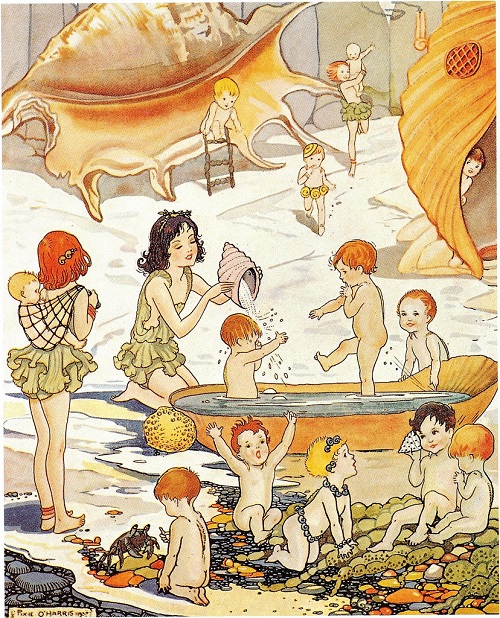 The success of this book drew the attention of other publishers and she spent most of the next year drawing images for four other books, all coming out in 1936. There is scant information about O’Harris’ life after this point. There were only two books featuring her work in the period between 1938 and 1939. The most likely reason she was kept occupied editing for Humour magazine. While lying in the hospital ward during the birth of her third child in 1939, she came up with the idea of painting hospital walls with murals. The joy of decorating the walls of children’s wards, baby health centres and schools continued for forty years and must have created the largest body of public works in Australia with over forty institutes decorated.

In addition to painting murals—in the Royal Alexandra Hospital for Children—four books illustrated by the artist were published in 1940. One of these books, The Pixie O’Harris Story Book, was also written. The Adventures of Poppy Treloar was published in 1941 and is significant in that it was a story specifically for girls. At this time there were few books for girls and with three daughters, the artist noticed this shortcoming and filled the gap with three Poppy Treloar books. A fourth book was added 22 years later when the publishers, Paul Hamlyn, decided to release the books in a box set. In 1943 she started another book series about a possum named Marmaduke. The first book was Marmaduke the Possum, with an additional two following. Marmaduke became a play in 1960; the producer was Julie Simpson who read the book as a child and was so entranced by it that she became determined to produce it as a play. Julie found O’Harris who agreed with her ideas. Within a few weeks the artist had written the whole play, designed the costumes, masks and the backdrops. The play ran for five weeks during the Christmas holiday period of 1960/61. She wrote a second play in 1979 called The Queen of Hearts, Paddy and The Moon Lady. 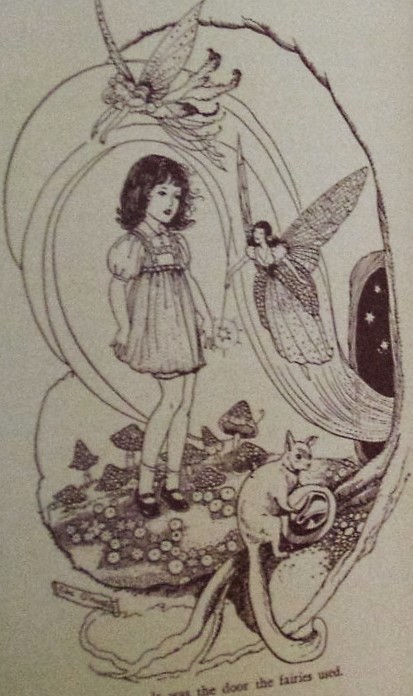 Another important book written by O’Harris was The Fairy Who Wouldn’t Fly. The book became very popular and was reprinted five times. 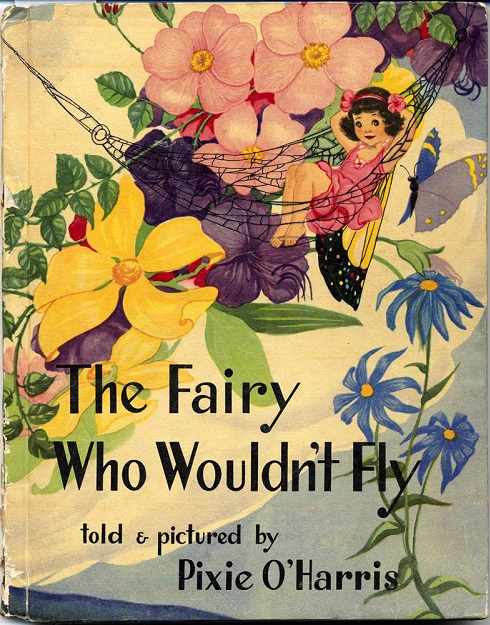 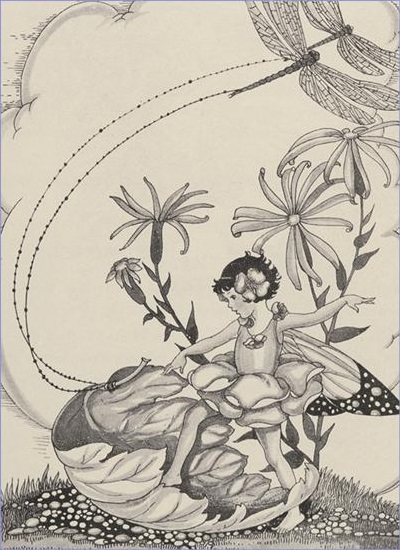 From 1950 through to 1970 she focused on her mural work as well as writing short stories, poems and then making the images to go with them for School Magazine. When not doing this work she took up oil painting and accumulated such a quantity that she was able to exhibit them yearly from 1964 onward. Her paintings depicted plants, flowers, fairies and other mythological beings.

A resurgence of interest in her work took place in the 1970s as three of her books were republished. This renewed interest led to Golden Books Publishing giving her contracts to write eight more books for them between 1978 and 1982. The books were cheaply produced so do not show her work to a very high quality, though the consumers did not care and large numbers were nonetheless sold. During the 1980s, two biographies were published and she also illustrated an edition of Wind in the Willows.

Her final commission came in 1990. The book was Alice in Wonderland, also known as The Pixie Alice, published by The Carroll Foundation. It was part of the 125th anniversary of the publishing of the original Macmillan publication. The book itself was designed to be a colouring book. The complete text to the original story was there with fourteen simply-drawn black and white illustrations. 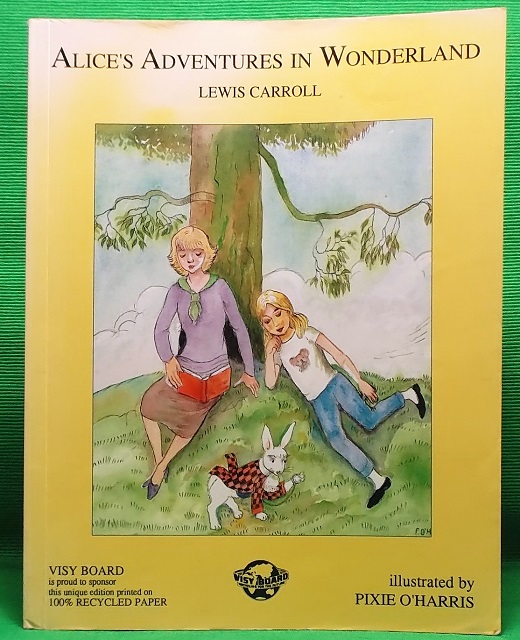 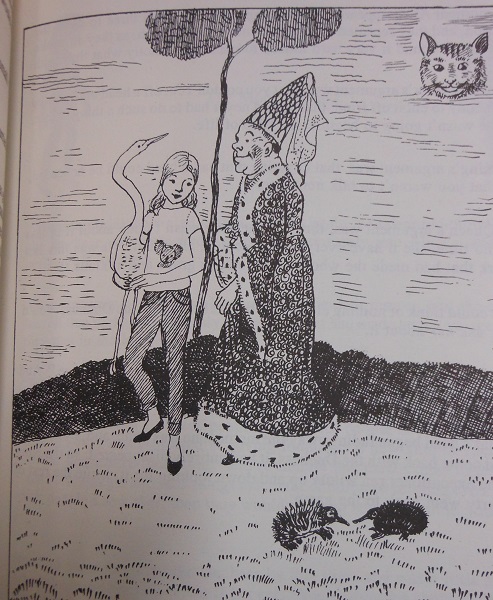 A year later in 1991 Pixie O’Harris passed away. In 1994 the Children’s Publishing Committee of the Australian Publishers’ Association (APA) established the Pixie O’Harris Award. It is awarded for distinguished and dedicated service to the development and reputation of Australian children’s books. The guidelines state that:

To be eligible, publishers, editors, booksellers and publicists need to have worked consistently in children’s literature, demonstrated a commitment beyond the call of duty and developed a reputation for their contribution to the industry. -APA

In recognition for her work in the arts as well as the painting of murals for children, O’Harris received several awards, a Coronation Medal, a Jubilee Medal and became a Member of the British Empire in 1976. She was made a Patron of The Royal Alexandra Hospital for Children in 1977. 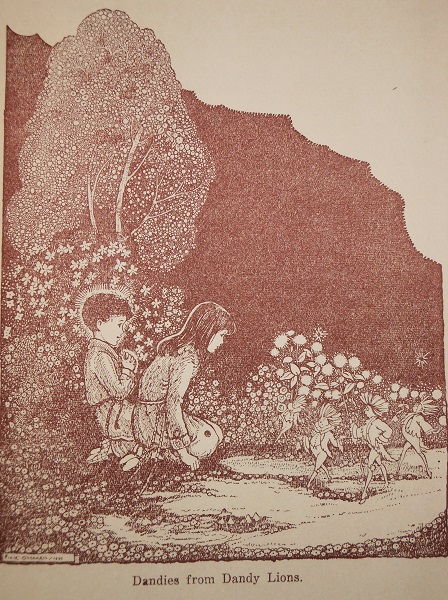 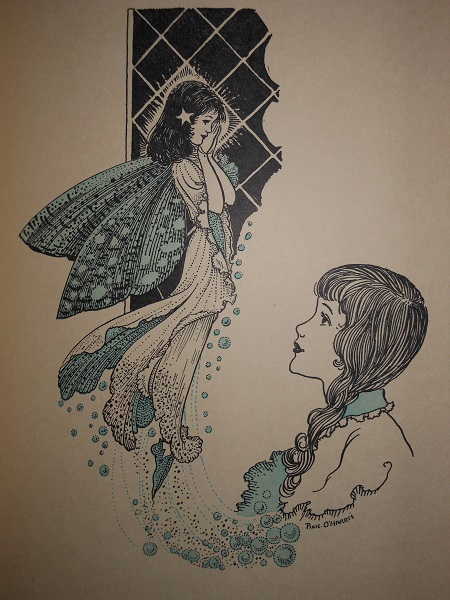