In a previous article last year, I introduced the topic of porcelain dolls, illustrating it with my own acquisitions. My collection having grown both in quantity and in diversity, I think that the time has now come to post a sequel.

There are many types of dolls. First they can be made with various materials: cloth, plastic, etc. The ones I own have their head (and generally the visible body parts such as hands) made from a matte type of porcelain (without enamel) called bisque (biscuit in French). But the rest of the body can be made in several ways, as I will explain. Then they can represent different types of people. Mine belong to the category called baby (bébé in French), which means in fact small children; but in that category, I never buy babies and toddlers, nor boys; I collect only girls looking to be between the ages of 5 and 12. Finally, dolls vary according to the epoch of their making. My previous article showed what one calls modern dolls, most of them were recent models produced for the tourist market.

I will start with five modern dolls bought since last year. Their head, hands and forearms, feet and lower legs are in bisque, but the rest of the body is made with padded tissue. The assembling of limbs is not always perfect, so that while they are held from their waist on a metallic holder (under their dress), their hanging legs can slightly slant to one side, and their feet be somewhat turned. One can minimize this defect in photography by taking the picture from a suitable angle and rotating it by 1 or 2 degrees.

I show first a small redhead (40 cm without the hat), with rustic clothes. 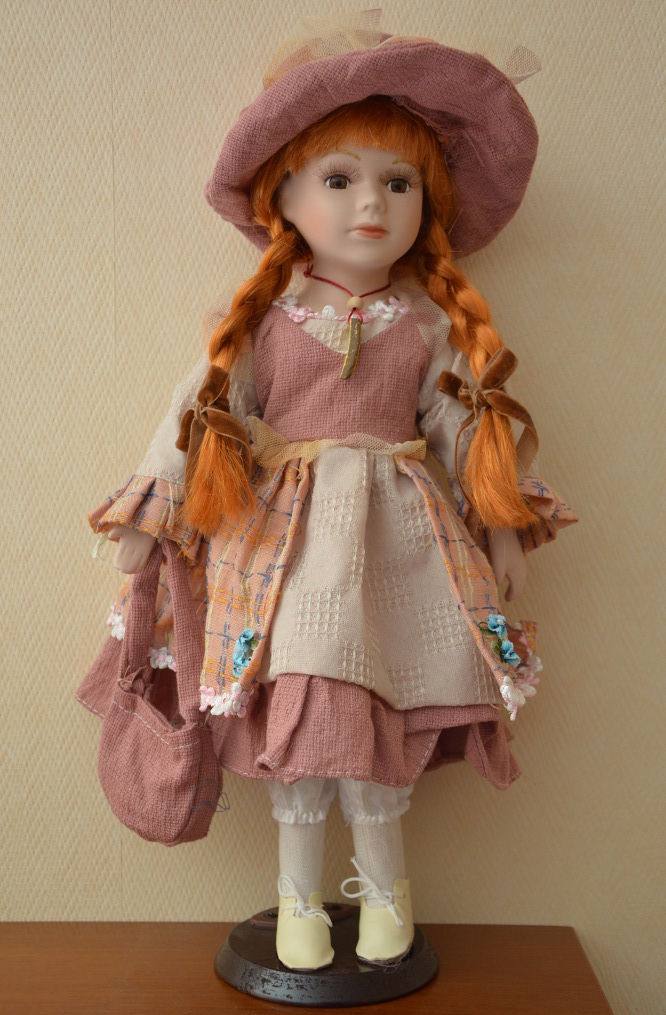 The next four dolls (as the last two in the previous article) were made by the German company Reinart Faelens Kunstgewerbe GmbH, whose brand name is rf collection. On the label one can read:

Decorative doll for collectors, minimum age: 14 years!
No toy! Small parts can break and be swallowed!

Indeed, they are not intended for little girls, but for adults. I show here my two loveliest ones. I consider them twins: I bought them on the same day, they have the same size (42 cm without the hat), and their clothes are similar. 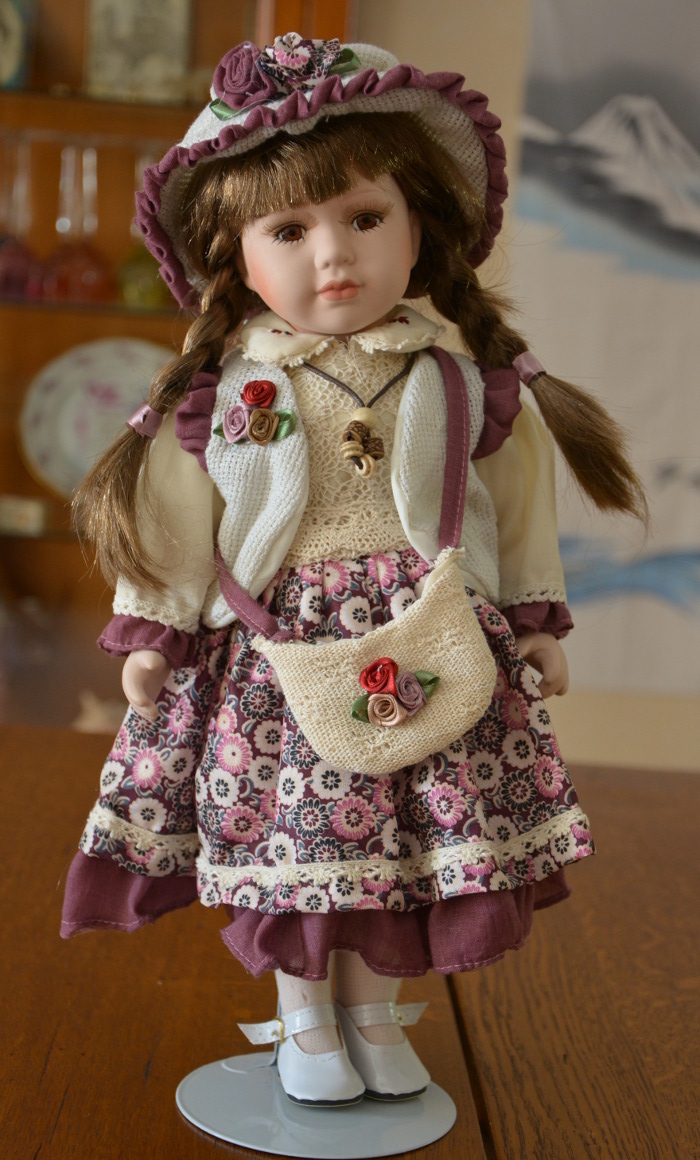 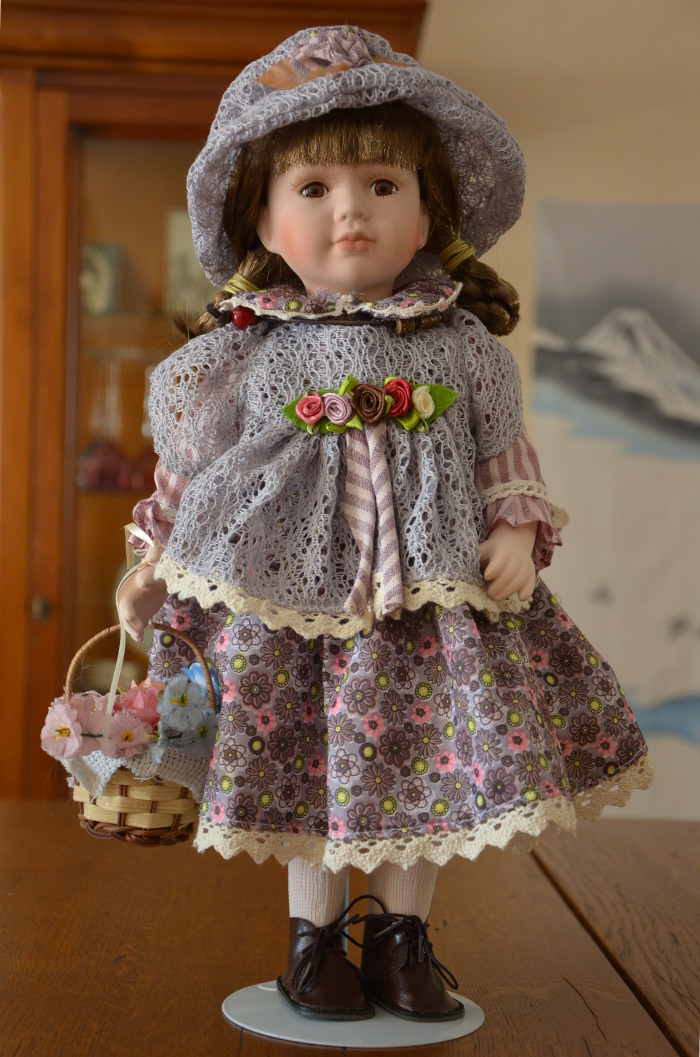 The next one is peculiar; she is not standing, but she has to sit on a chair (her knees are folded); she is approximately 55 cm long. 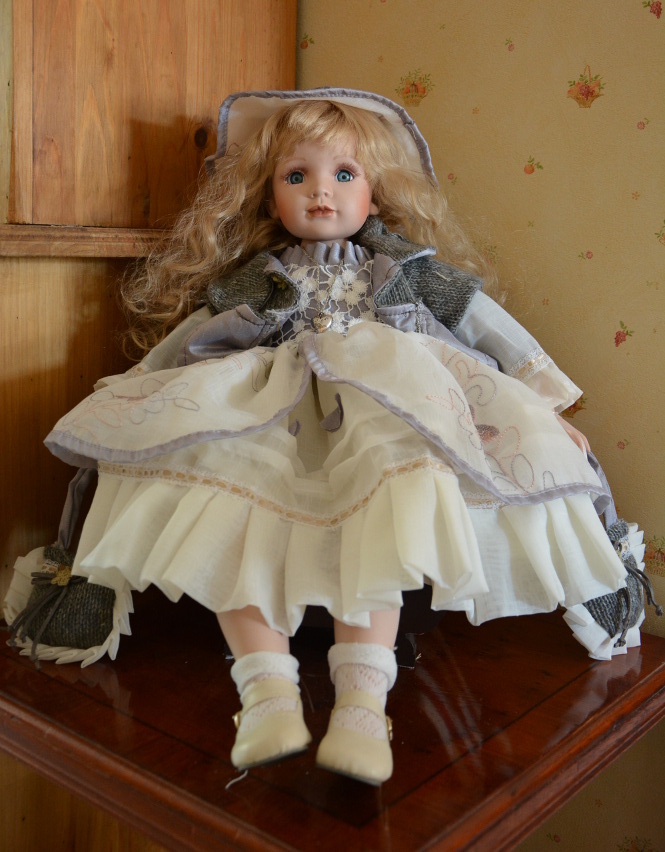 I call the last one (54 cm without the hat) the green fairy, because of her green dress, but also because she stands next to the glass cabinet where I keep my absinthe. 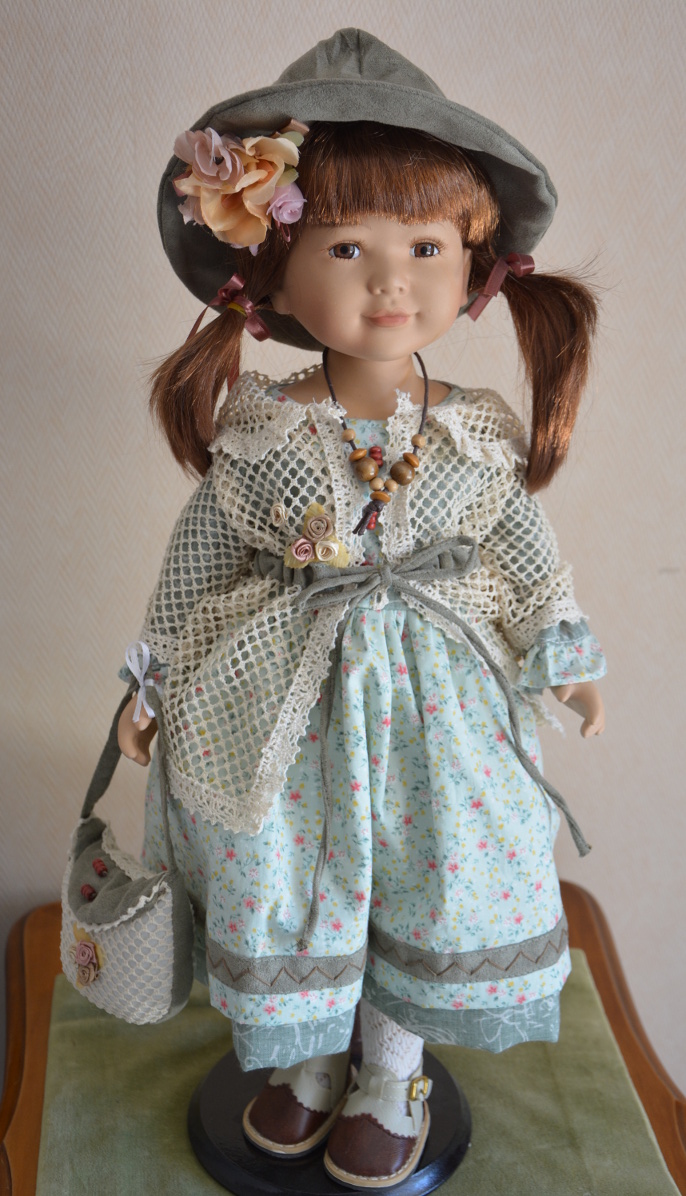 Photographed from another angle, she seems to be dreaming. 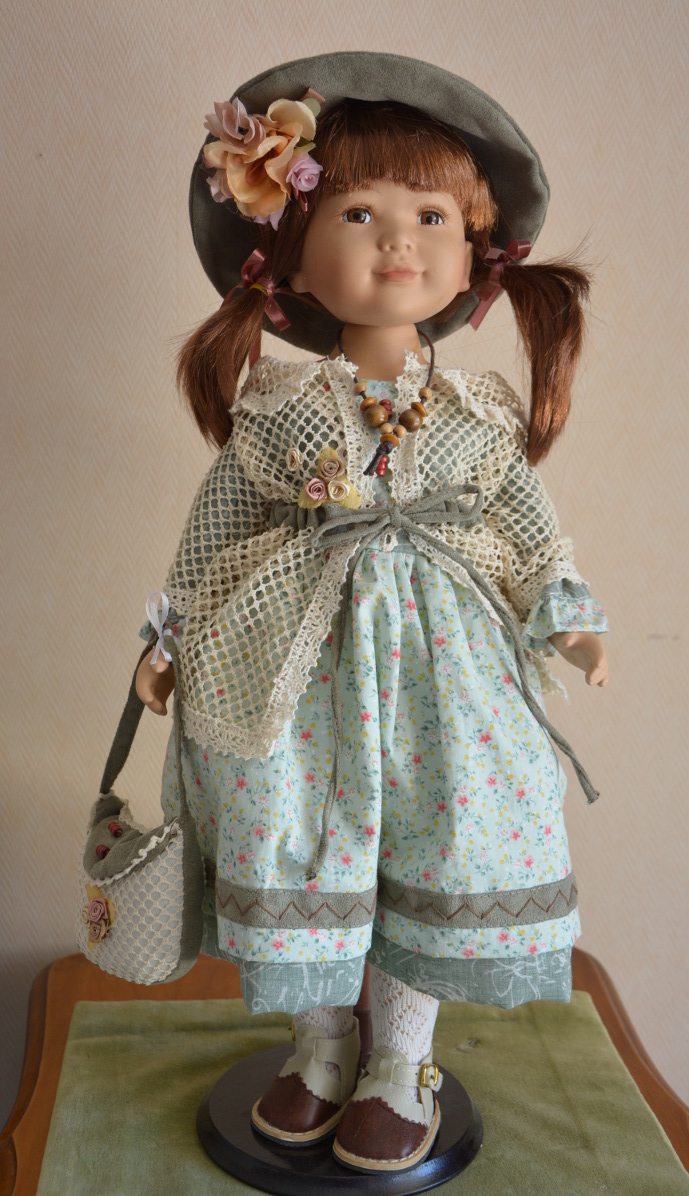 Now I show my big doll, she measures exactly one meter. I bought her last year in a flea market in Strasbourg. As with modern dolls, her head and hands are in bisque, and her body in padded tissue, but her lower legs and feet seem to be made of painted tissue covering some light and flexible matter, maybe cardboard. As it often happens with second-hand dolls, her soiled face needed some washing, and her dusty bloomers and petticoat required a laundry. She has been featured in Agapeta, where I showed her sprawling on a sofa. But I decided that her dignity (and my comfort) required buying a chair for her. And she even got her own doll, a very old one. 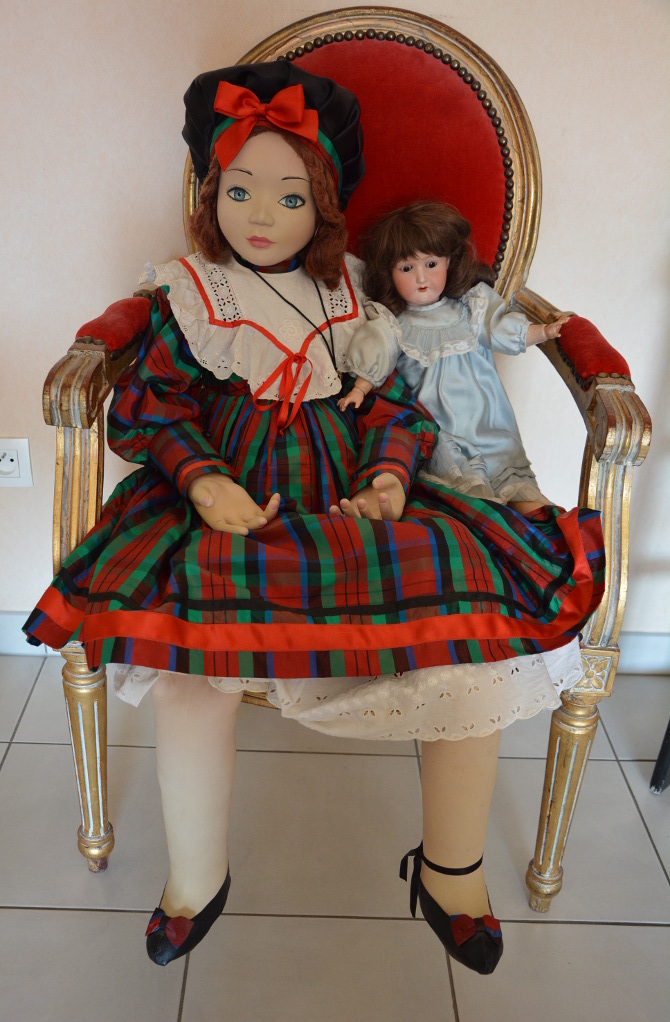 Before describing the latter, I must introduce the topic of vintage bisque dolls. They often date from the early 20th century, sometimes from the 19th. They are rather expensive, generally costing several hundred euros; I even saw a beautiful 19th century doll by a renowned maker, in perfect condition, priced 13 000 euros! The body can be made from various materials, such as tissue, wood, “composition” (imitation of bisque), or a kind of painted papier mâché. Often the arms are articulated, and instead of dropping, they can be held raised thanks to elastic rubber attached to them inside. Generally the hair and the clothes are recent replacements; in fact they often have real human hair, in contrast to modern dolls that have synthetic hair (hence, because of reflections, they should be photographed without a flash). Given the sophistication of their moving body parts, it seems that they were not decorative dolls, but real toys.

German dolls from the early 20th century usually have the brand name, model and geographic origin engraved at the back of the head. This one is a series 250.0 of the maker Ernst Heubach in Koppelsdorf, Germany. I bought it from an antiquarian in Strasbourg, who dates it from around 1900. As another site states: “The Germany inscription reinforces the early 1900 date. Starting in the early 1920’s the US started requiring the ‘Made in Germany’ mark on imports.” She has “sleeping eyes”, that is, her upper eyelids close when she lies on her back. Her articulated shoulders and elbows can both fold and rotate as in humans, and her wrists can rotate. Her legs are articulated at the hips and knees (but without elastic to prevent them from dropping down). Note also her open mouth. 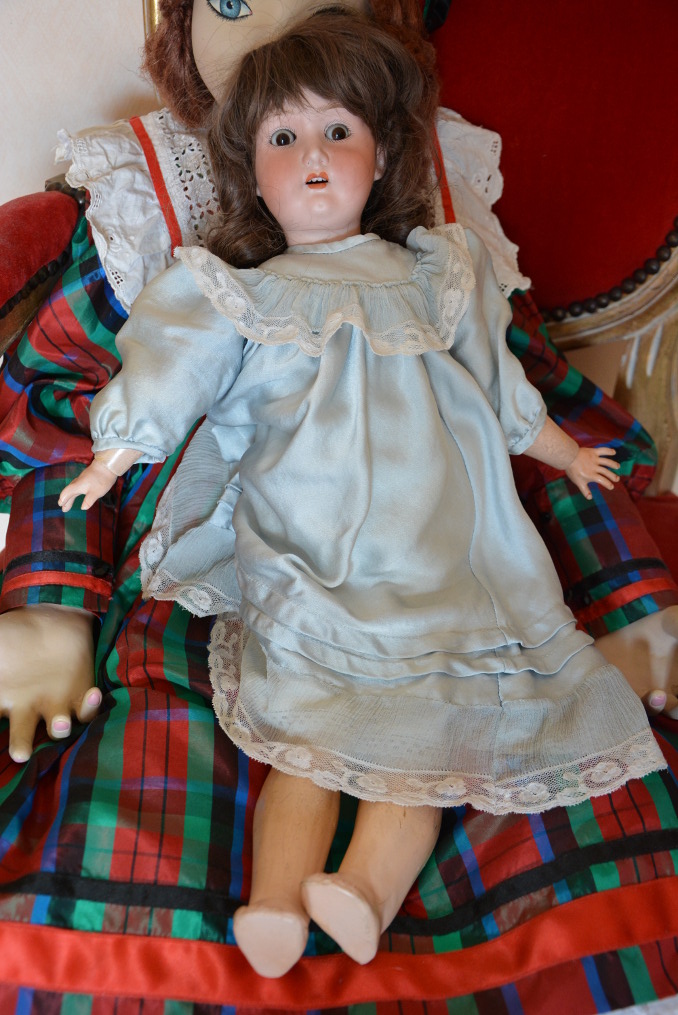 I bought the next vintage doll at the Musée de la Poupée in Paris. It is a series MOA 200 made for the brand Welsch & Company by Max Oscar Arnold in Neustadt, Germany. I was told that it is dated 1940; however I think it could perhaps be older, since according to the reference site, the Max Oscar Arnold Doll Company operated until 1930. Since she wears a nightgown, I put her in my bedroom. She also has an open mouth, limbs rotating and folding at the hips, knees, shoulders and elbows, and rotating wrists. I had to untangle her hair, but I do not dare use a comb to groom it, since it might be torn from the felt scalp—so I leave it wildly spread around her face. 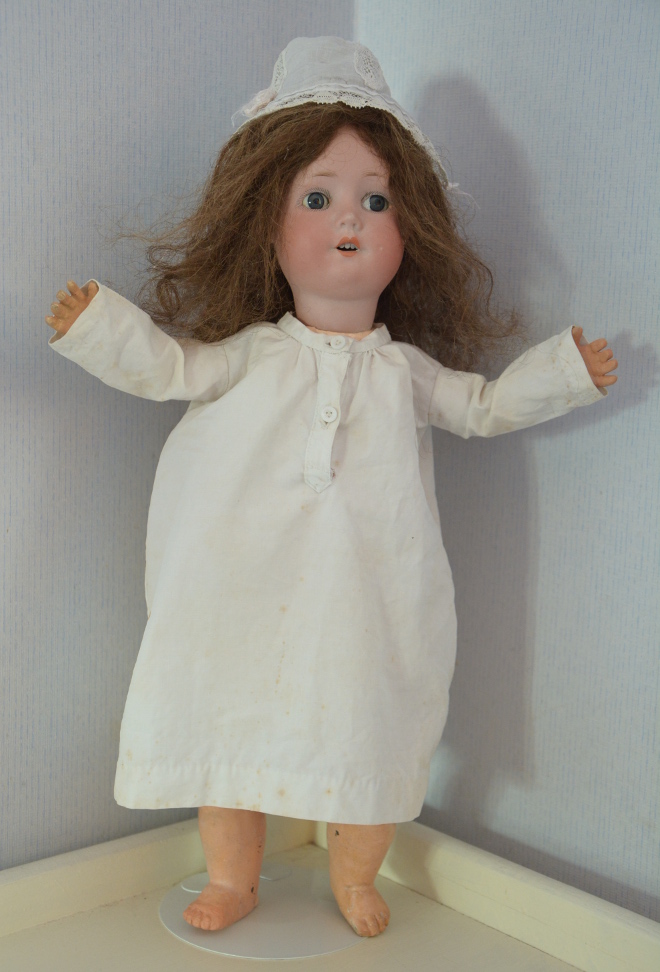 Readers who looked carefully at the previous post may have noticed that another doll was standing at that place in my bedroom; indeed the latter moved to my kitchen.

My last doll, the most expensive one, was also bought at the Musée de la Poupée in Paris. They date it 1945. It was made by Monica Doll Studios, Hollywood, CA, USA. Her arms and legs are rigid; they move only at the elbows and hips. But while the trunk and limbs of the two German dolls were rather rough in their making, Monica’s body is made in the same material as her face, and with the same quality. So maybe it was a decorative doll, not a toy. 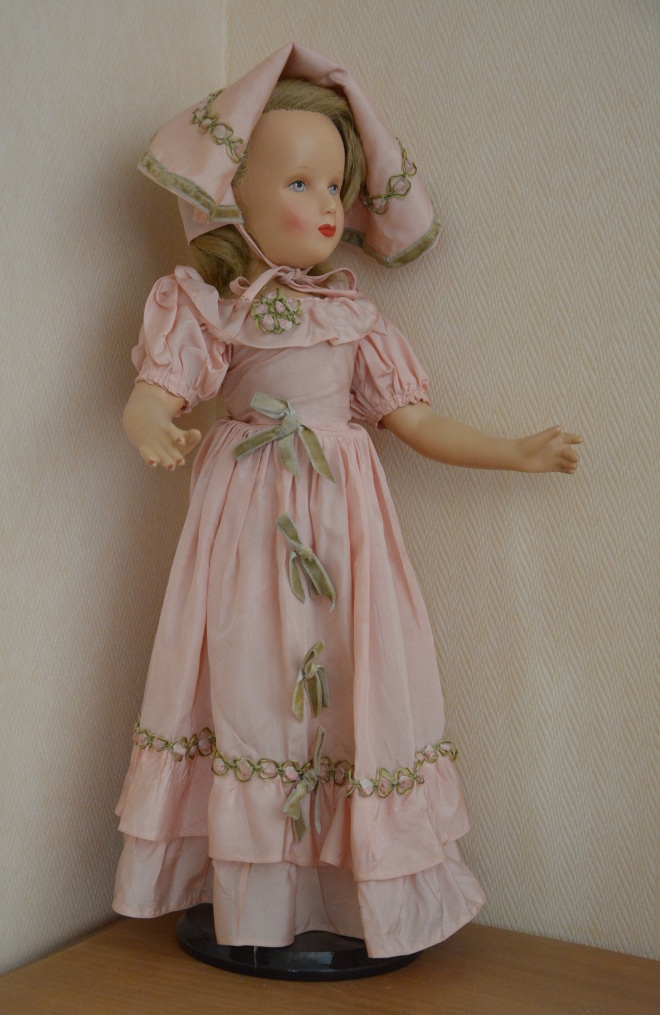 Here we can see her from another angle. 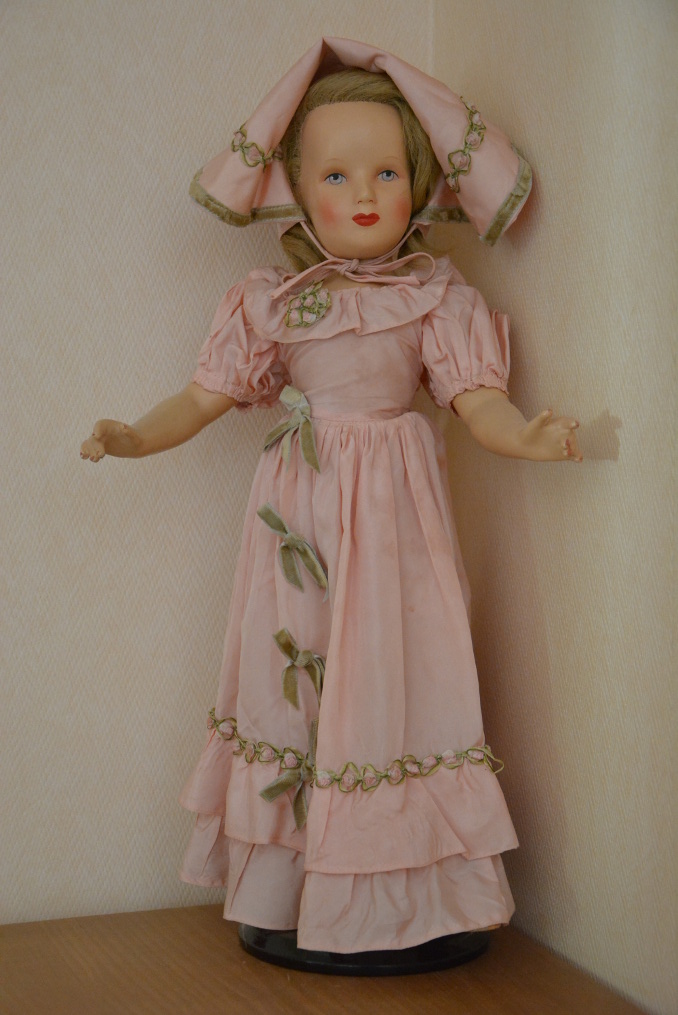 I am not sure whether I will buy any more dolls. They fill my apartment, I am starting to run out of room for them.

1 thought on “Modern and Vintage Dolls”