Ida Rentoul Outhwaite (1888–1960) was an illustrator born in Melbourne, Australia. She was a self-taught artist, as her parents believed that art training would ruin her individual style. She attended the Presbyterian College of East Melbourne and it was there that her artistic pursuits started as she spent her lessons drawing in the margins of her books. 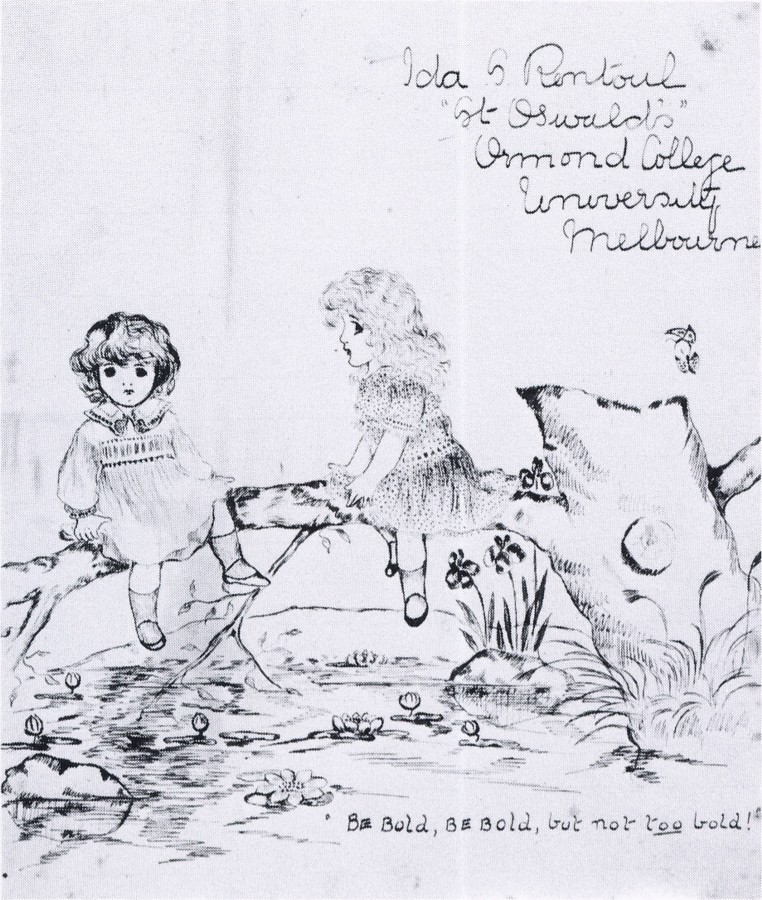 Ida had her first illustration printed at the age of thirteen when a friend submitted it to an unknown English magazine and they reproduced it. Her first professional and recognised appearance came in 1903, at age fifteen, when she illustrated ‘The Fairies of Fern Gully’ for New Idea Magazine. 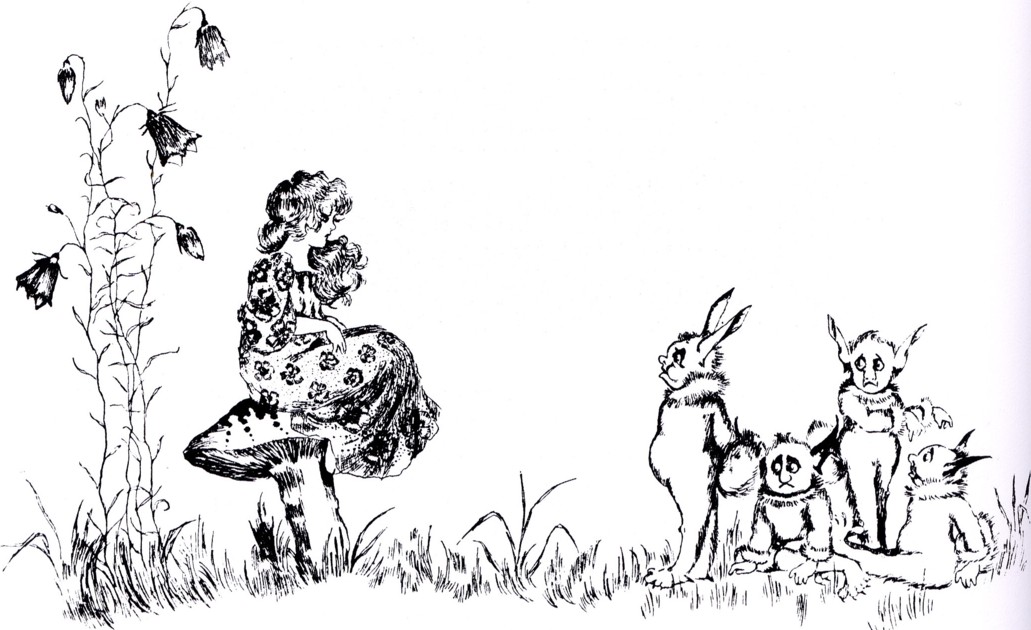 The story was so well-liked that she was asked to make a set of six Christmas cards called “Austral Greetings.” 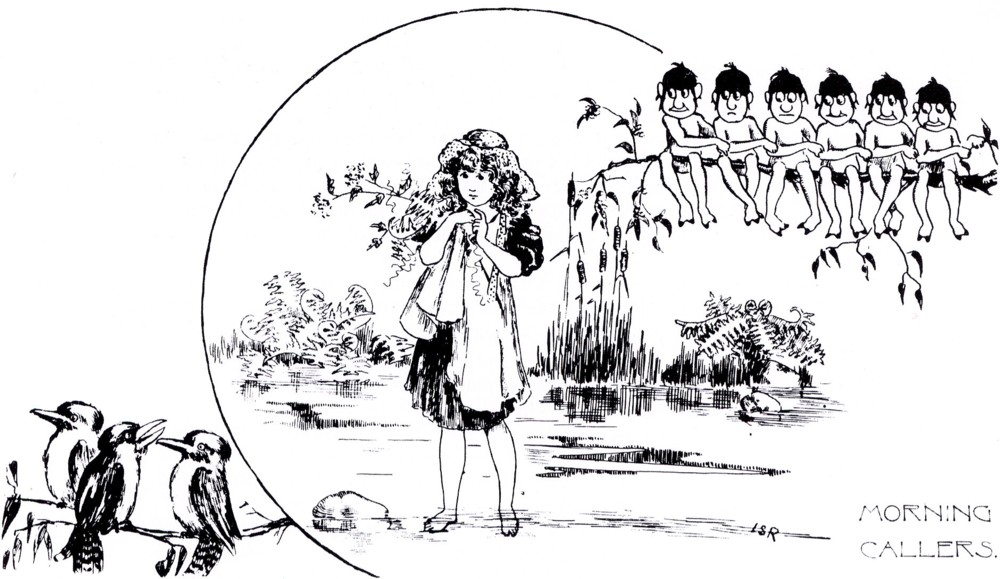 The next year Ida and her sister, Annie Rentoul made their first book together, Molly’s Bunyip (1904). 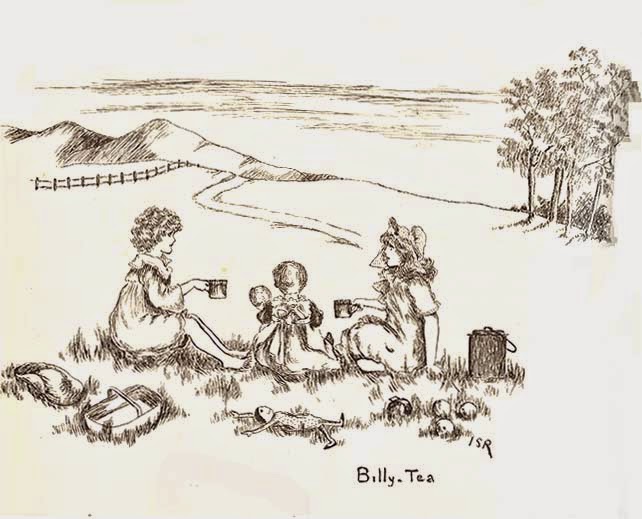 Molly’s Bunyip was a remarkable book because, for only the second time (the first being Dot and the Kangaroo), Australian children could see magic happening in the Australian bush rather than a European setting which was typical at the time. The financial success of this book encouraged the sisters to write other stories with New Australian Fairy Tales released the same year and the book Molly’s Staircase in 1906.

In 1907 Ida’s illustrations were becoming so popular that she was being asked by other magazines and authors to illustrate for them. The J.C. Williamson theatrical firm asked Ida to start illustrating the booklets that accompanied their pantomimes. Additionally Ida and Annie released two more books, Molly’s Adventures (1907) and Lady of the Blue Beads (1908) 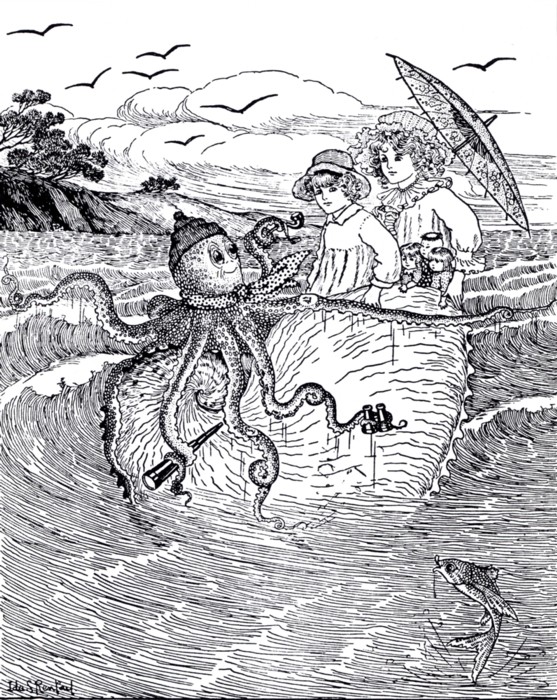 In 1907 Ida took part in the Woman’s Exhibition, celebrating the achievement of women. In addition to having new artworks displayed, she released a song book Australian Songs for Young and Old with lyrics by Annie Rentoul and music composed by Georgette Peterson. The three women published two more books, Bush Songs of Australia for Young and Old in 1910 and More Australian Songs for Young and Old in 1913. These song books quickly became classics. That same year, a working friendship with author Tarella Quin was started with the production of Gum Tree Brownie and other Faerie Folk of the Never Never. Ida and Tarella also produced Before the Lamps are Lit (1911), Chimney Town (1934) and The Other Side of Nowhere (1934).

In 1909, her productivity dropped temporarily probably due to her marriage to Grenbury Outhwaite in December 1909 with marriage preparations and other social engagements taking up a lot of time. Over the next ten years, her four children were born. It was during this period that she began to master watercolour painting; prior to 1909 most illustrations had been done in pen and ink. All these years of practice lead to the production of Elves and Fairies (1916), her defining work. 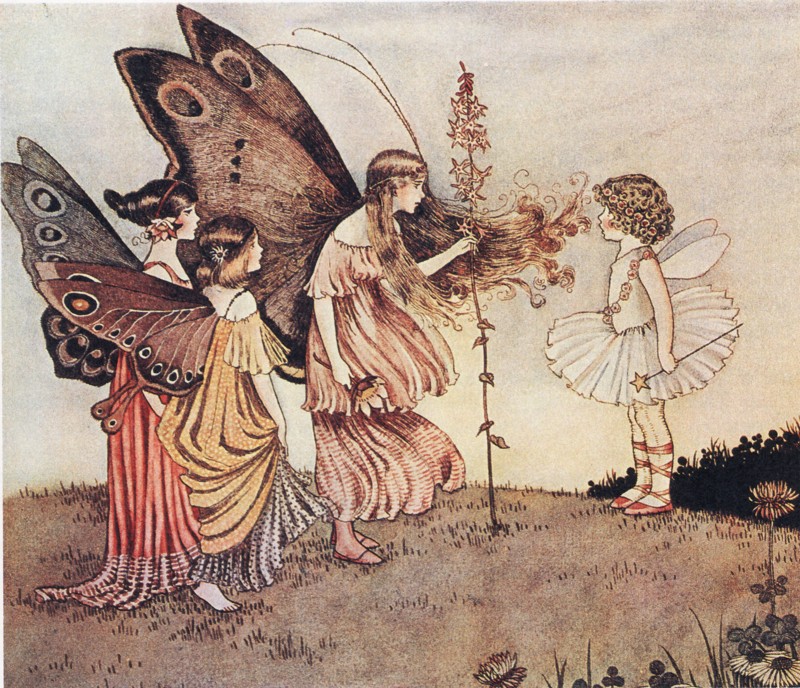 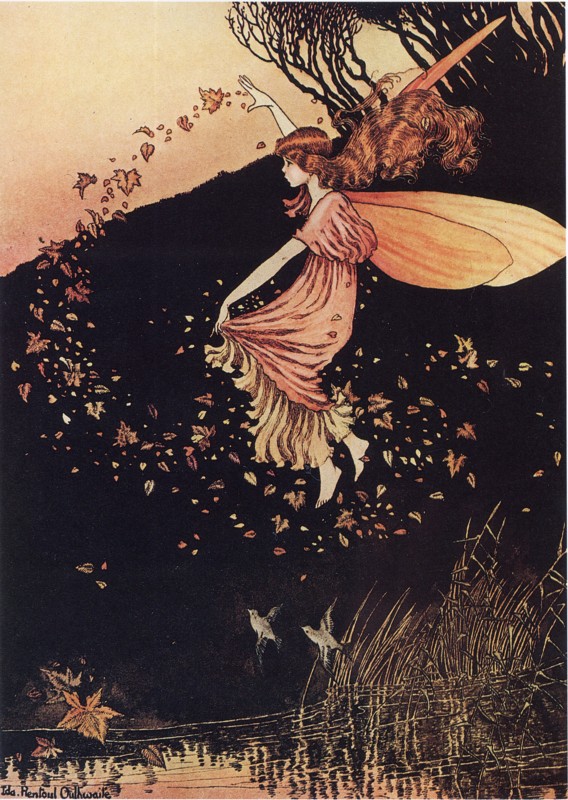 Elves and Fairies was published by Lothian in 1916 and was an amazing book for its time. Few art books with color plates had been printed and this was one of the first. It was large as well at a length of 38 cm with fifteen color plates and thirty black-and-white illustrations. 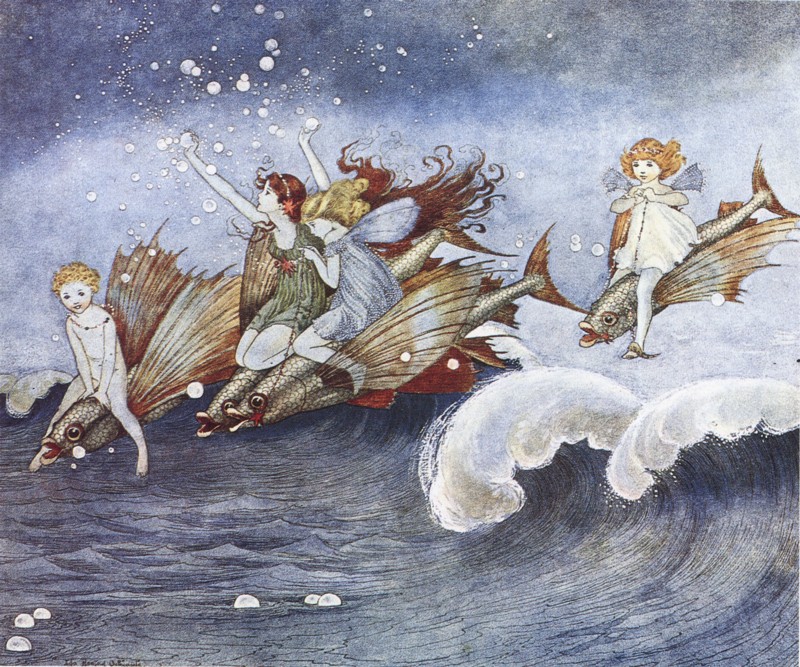 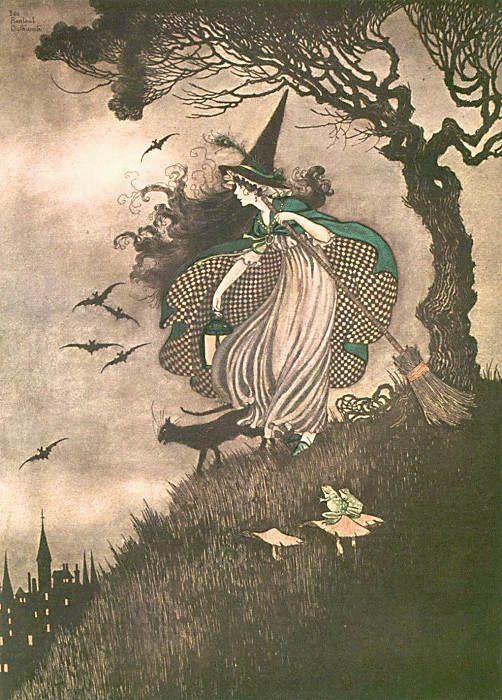 A publication like this was largely possible because of Grenbury’s marketing and commercial talents, Grenbury Outhwaite also underwrote the production of the art book. Concurrently with the publication of Elves and Fairies, Ida’s first solo exhibition was held. At four guineas, Elves and Fairies was so expensive that a smaller and significantly cheaper edition was printed in 1919 making the book more accessible to children, the target audience.

Ida’s fame was not restricted to Australia. By 1920 Europe had learned about her illustrations and her first exhibitions, organised largely by Grenbury Outhwaite, in London and Paris were held. These shows caught the attention of the publishers A&C Black and from then onwards all her European books were produced by A&C Black. 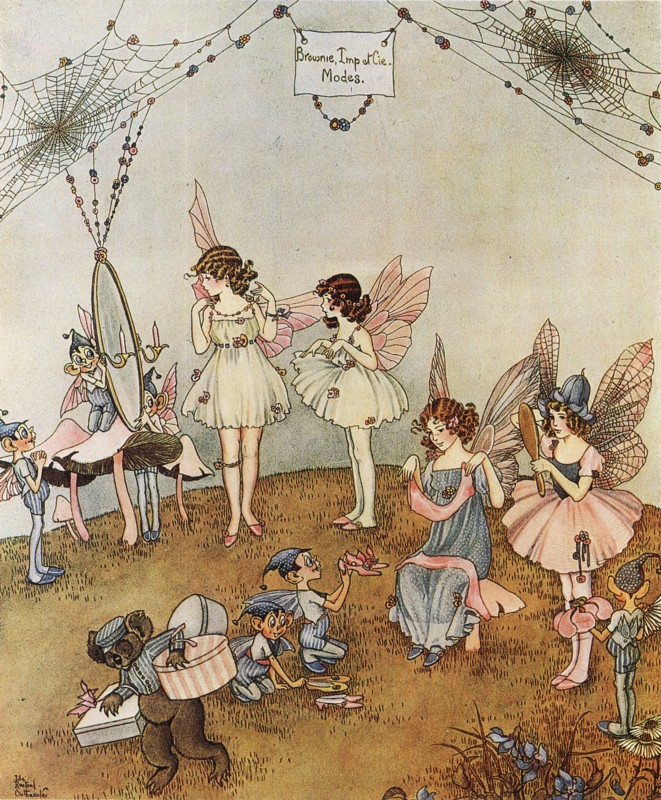 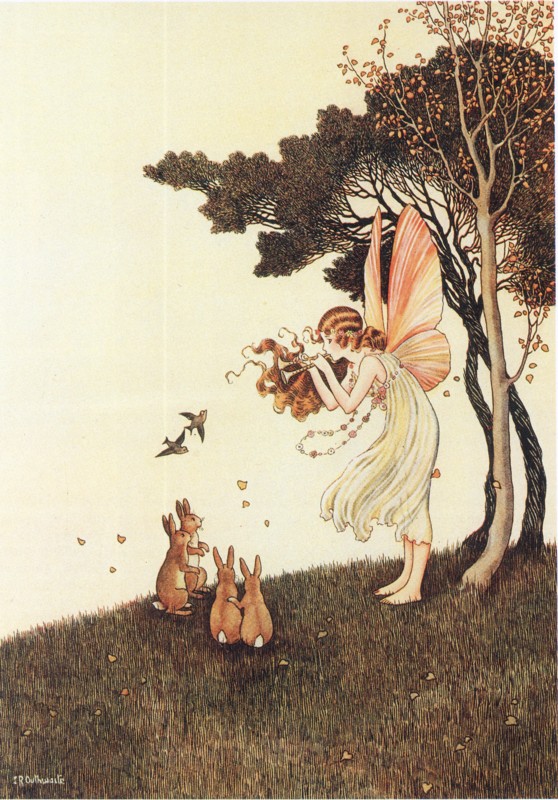 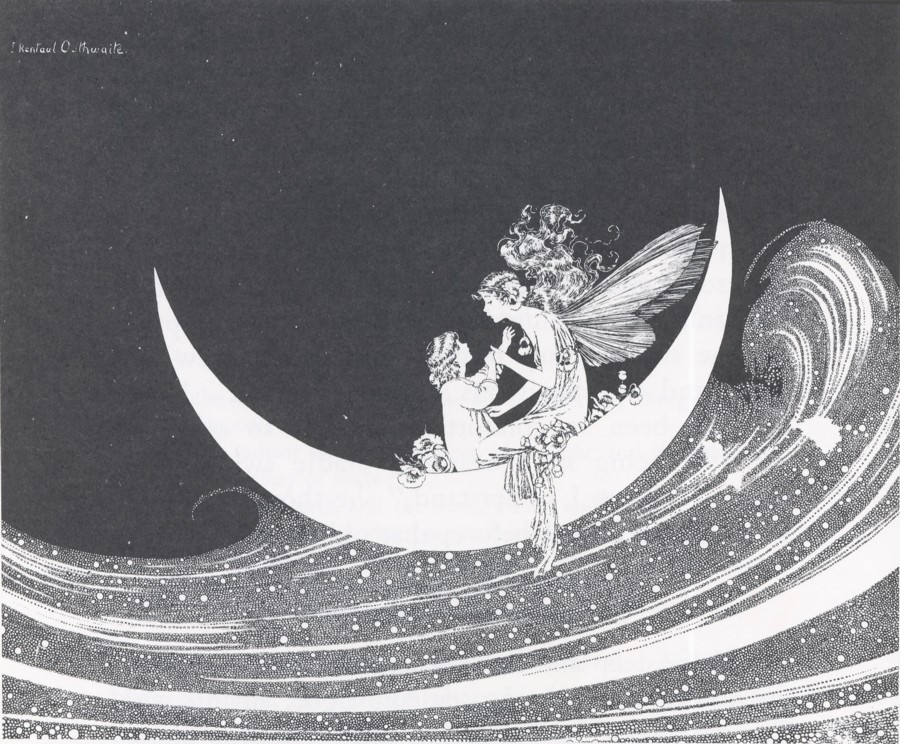 Ida’s career was then at its peak and though she still did the occasional illustration for magazines, newspapers and advertisers, most of her income was coming from exhibitions. At least one exhibition of Ida’s work was held each year from 1916–1924. Ida was still illustrating books, in collaboration with Annie and Grenbury, with five books released between 1921 and 1928—the most popular being The Enchanted Forest (1921) and The Little Green Road to Fairyland (1922). Ida produced another huge art book in 1926 named Fairyland of Ida Rentoul Outhwaite.  Fairyland was priced at five guineas so was truly for collectors only; it was also her only book to be released in America. 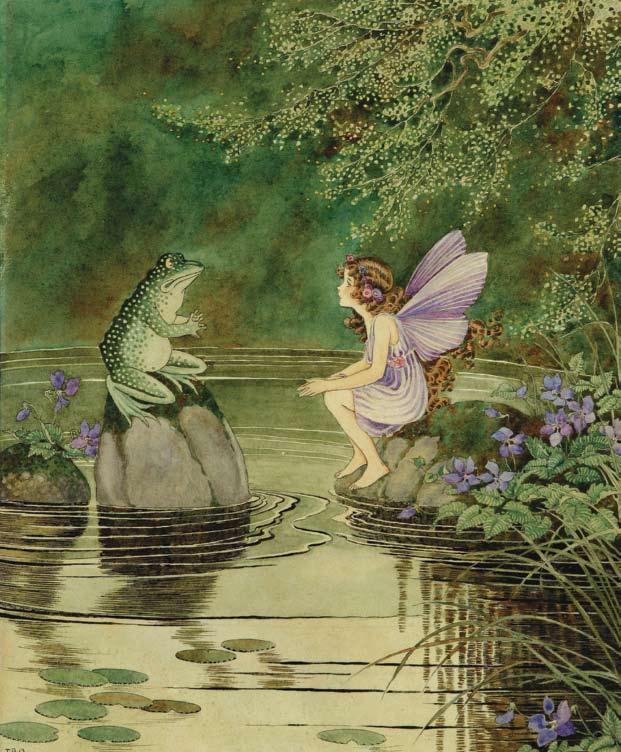 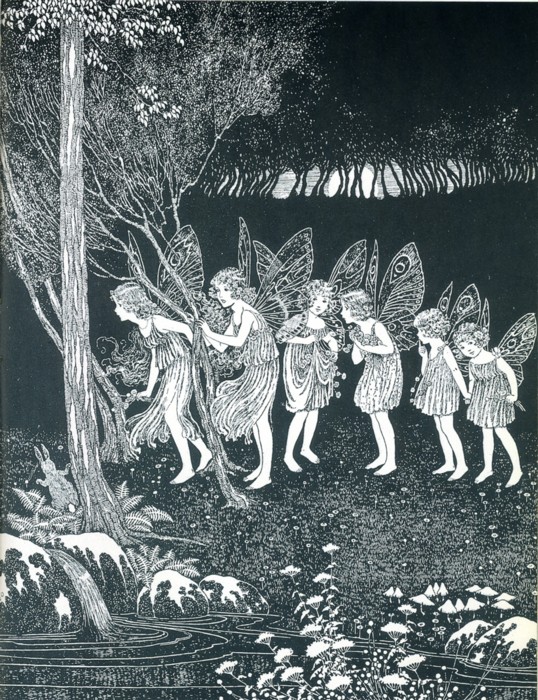 Ida’s popularity began to decline in the 1930s; by this time she was forty-two years old and had been illustrating for over twenty years. Part of the reason for the decline was a lack of variety in her work as well as a change in tastes as fairy books were replaced by animal books. In response to this change, Ida began to produce books with less emphasis on fairies and more on animal characters. The change was first noticeable in the book Blossom: A Fairy Story where one of the main characters was a magical cat and then in the ‘Benjamin Bear’ comic strip which ran in the Weekly Times from 1933–1939, featuring almost no humans. 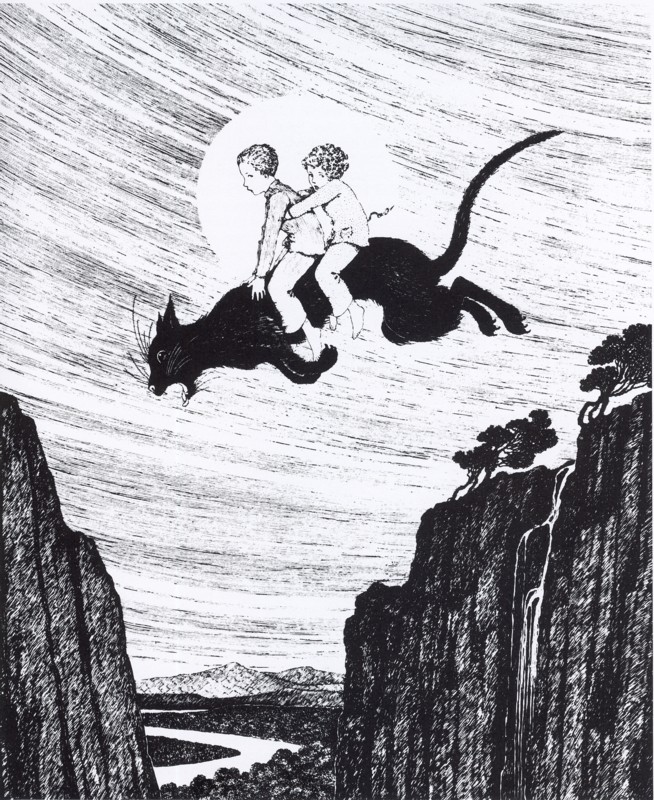 Ida Rentoul Outhwaite – They felt themselves and Samuel Rise Up, Up, Up from the book Blossom: A Fairy Story (1928) 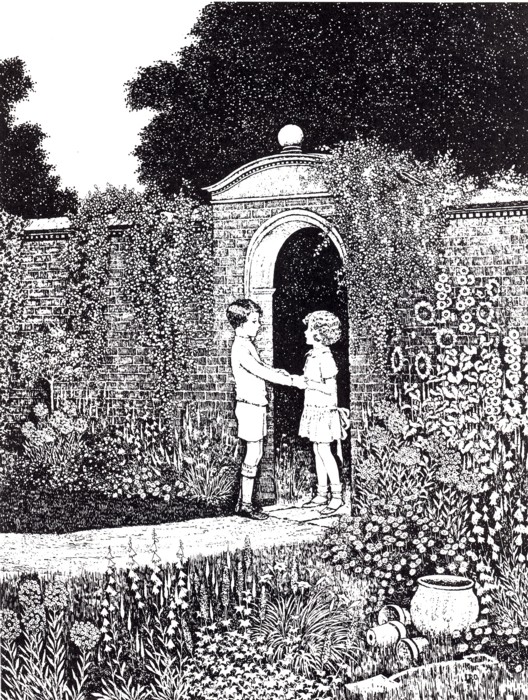 Ida Rentoul Outhwaite – Always they Said Goodbye at the Little Green Door from the book Blossom: a Fairy Story (1928)

Ida continued to illustrate books for Annie, Grenbury and other authors. However these were rather minor books. Of these, her fairy illustrations made an appearance in A Bunch of Wild Flowers (1933). Six Pence to Spend would be the last book Ida wrote herself and in 1938 Grenbury Outhwaite passed away ending their thirty years of collaboration. 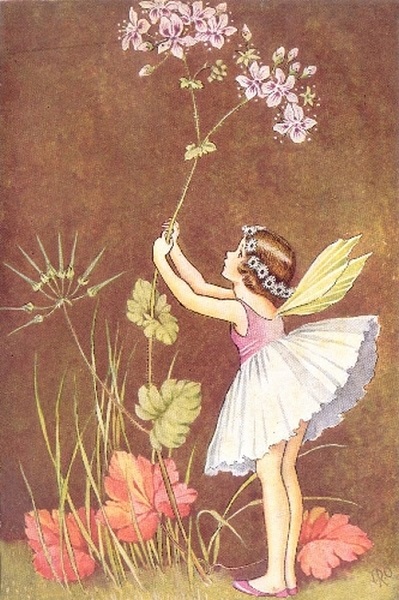 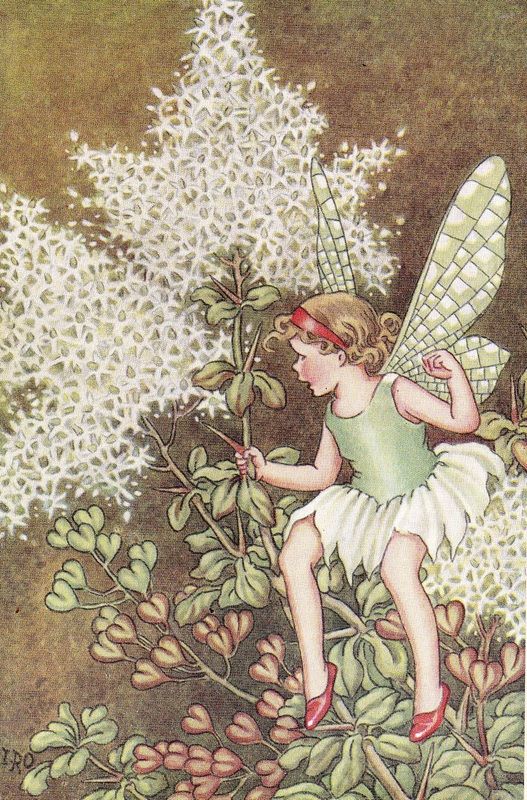 During the war years she supplemented her income by working in the Censorship Department where she read POW and other detainee mail. Her last illustrating job was in 1958 illustrating Legends of the Outback by Phyllis M. Power. At the end of her career she had produced over 600 individual illustrations. 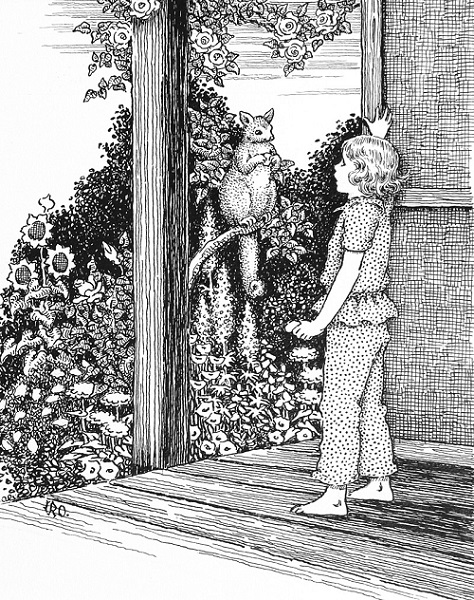 As this is only a brief description of Ida’s illustrating work, there is a more complete bibliography here.

Additionally, at The Collecting Bug website you will find a large library of images showcasing the illustrations of Outhwaite and information about these works.

1 thought on “The Mother of Australian Fairies: Ida Rentoul Outhwaite”