Researching Ernest Nister has been a difficult pursuit as no business or personal archives are known. Additionally, as he appears to be of little interest today there are few researchers of Ernest Nister and the papers or text books they publish are difficult to acquire. What follows is a brief description of Nister and his publishing company that I was able to piece together from the few sources that are readily available.

Ernest Nister (1842–1906) was a publisher born in Darmstadt, Germany. Ernest spent his school days studying business. However what he did from then until 1877, I have been unable to determine. In 1877 Ernest acquired a small lithographic workshop in Nuremberg and set about modernising it. Most of the printing was done in chromolithography and the number of products the business produced included annuals, storybooks, toy books, poetry and religious stories, as well as calendars, greeting cards, embossed pictures and games. As these items are so ephemeral—calendars are normally disposed of at the end of each year—few examples exist today. However, I shall show some calendars and postcards I have found on the Internet. 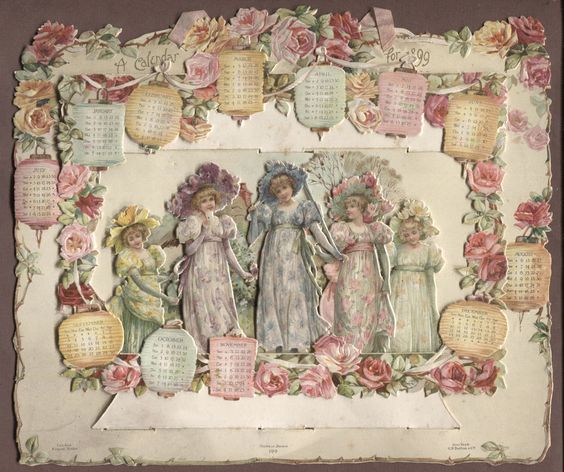 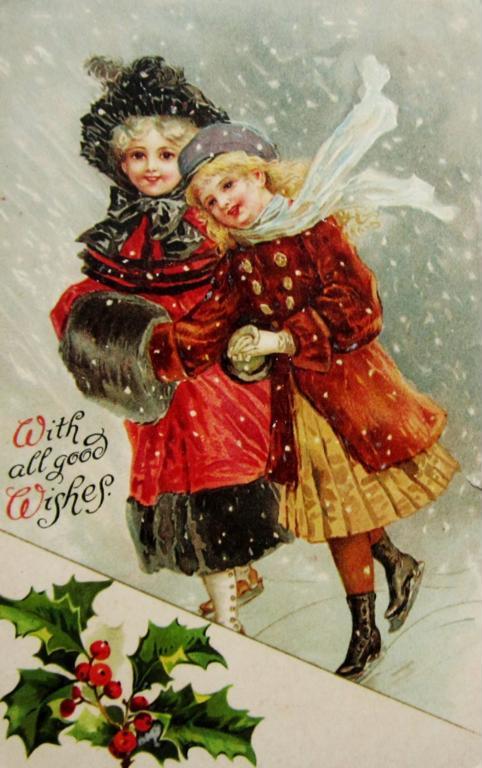 Nister’s printing business also did work for other publishers like Castell, Farran, Griffith, Okeden and Routledge. Because of these contacts, Nister became a publisher in his own right in 1888 when he opened offices and design studios in London. Nister hired Robert Ellice Mack as director who was responsible for finding authors and illustrators as well as compiling and editing the books before sending them to Nuremburg for printing. Nister did very little of the creative work. Instead, he would organise and direct the workers, manage the business and supervise the printing process with the exception of wood engraving which was supervised by a co-worker named C. Priess. Distribution of the books in America was done by E.P. Dutton. 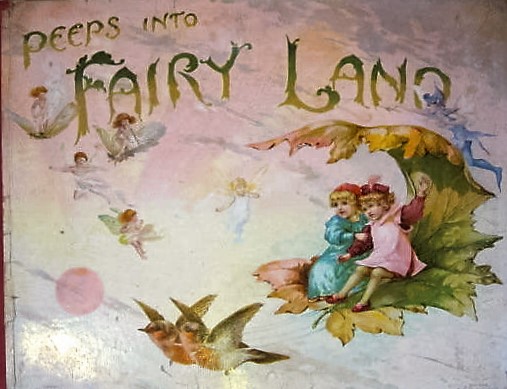 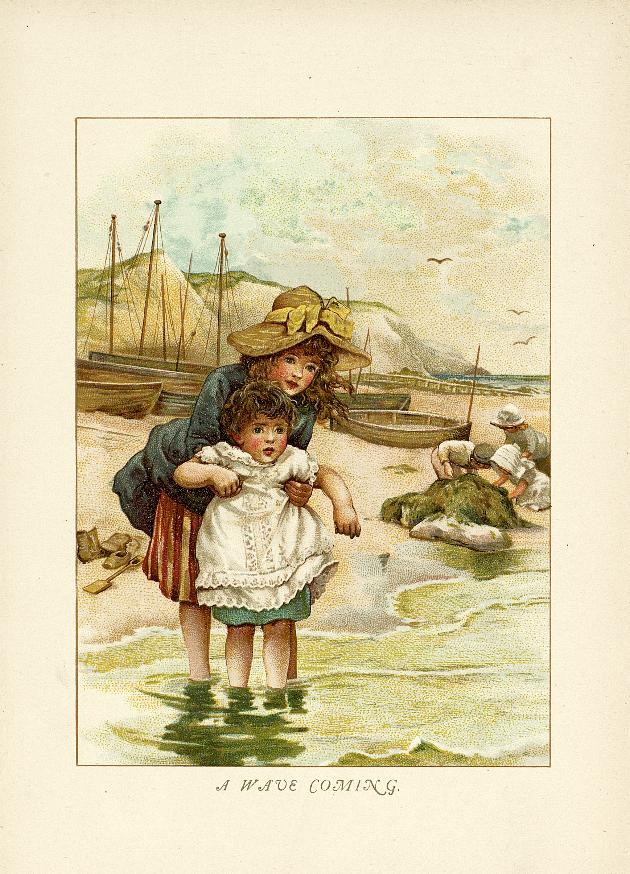 (Illustrator Unknown) – A Wave Coming, from the book Cosy Corner (1892) 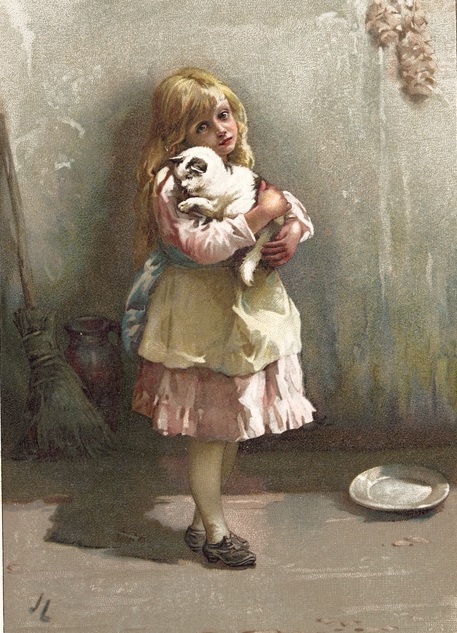 Ernest Nister is remembered most for his embossed, panoramic and movable books. Embossed books were an early speciality for Nister. From these embossed books Nister developed the pop-up book whereby the embossed figures were die-cut then mounted within a three dimensional framework. The figures were then connected to the opposing page, by paper or fabric guides, so that when the page is opened the figures rise from the page. Nister was not the first person to create pop-up books, however, he was the first to create automatic pop-up books. Prior to Nister’s invention, pop-up scenes had to be manually manoeuvred upright by the reader. Displayed below you will see two differing types of Nister’s pop-up book. The first two are three-dimensional scenes set within a frame that are connected to the opposing page. The third is frameless and is created by standing the book upright and lowering the page onto the table making the characters appear as though they are standing on a stage. 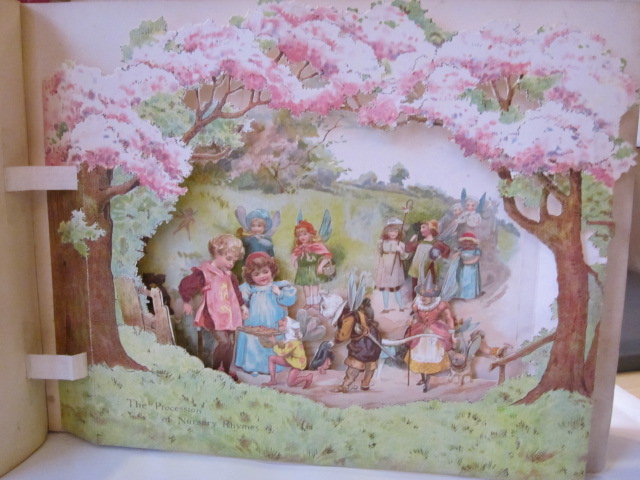 (Illustrator Unknown) – The Procession of Nursery Rhymes, from the book Peeps into Fairyland (1895) 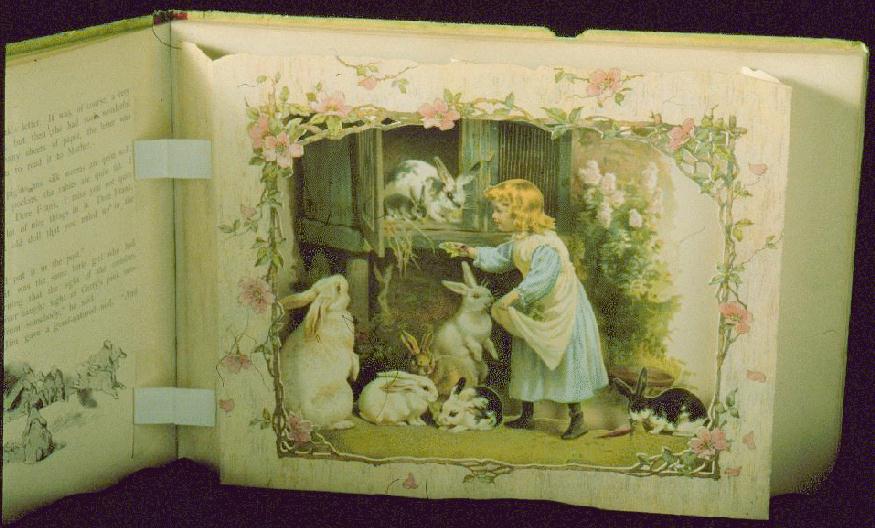 (Illustrator Unknown) – The Little Pet, from the book Little Pets (1900) E. Stuart Hardy – Untitled illustration from the book Land of Long Ago (1890)

Another of Nister’s inventions is the dissolving picture which works like a venetian blind. The picture is divided into five parts and when the tab at the bottom of the picture is pulled another picture slides from underneath and covers the original. 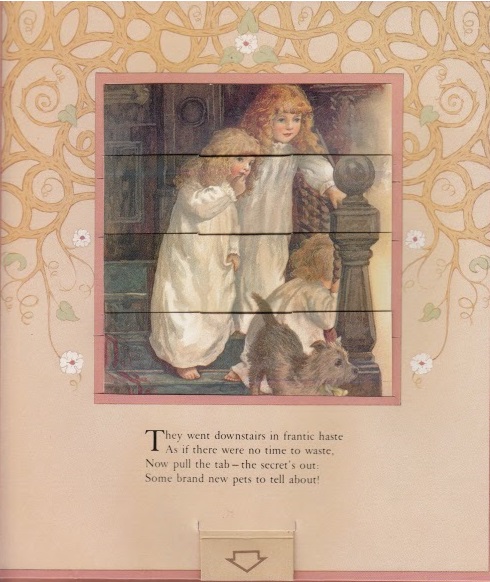 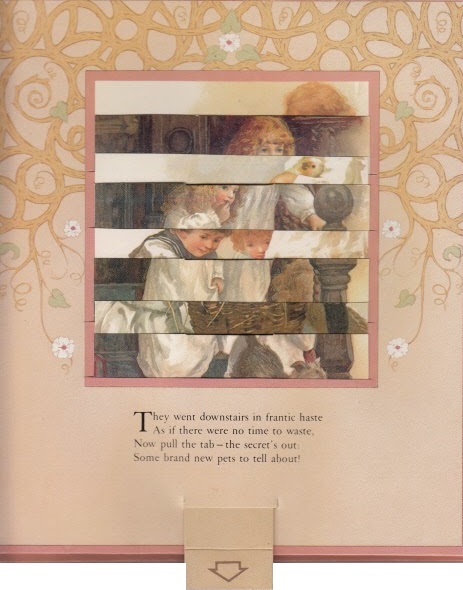 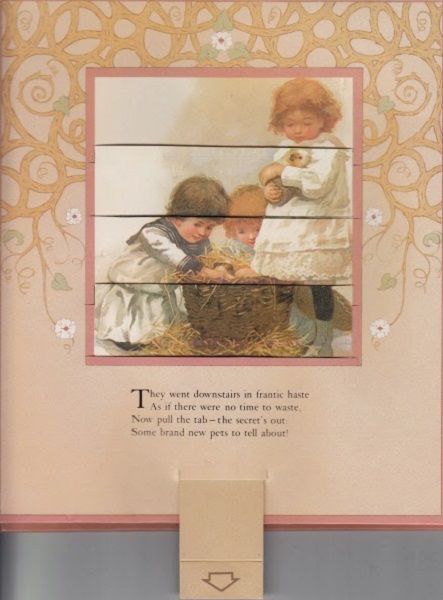 The dissolving effect can also work with a sliding door type mechanism. 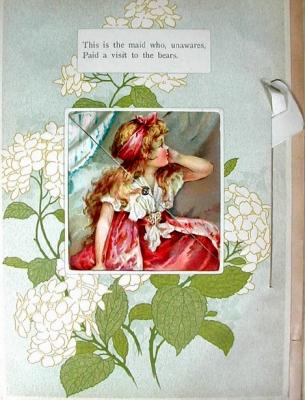 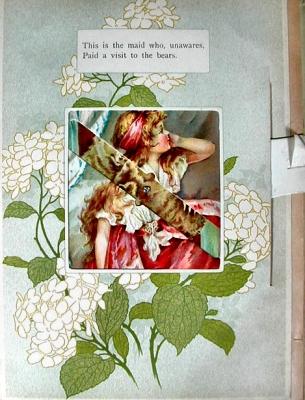 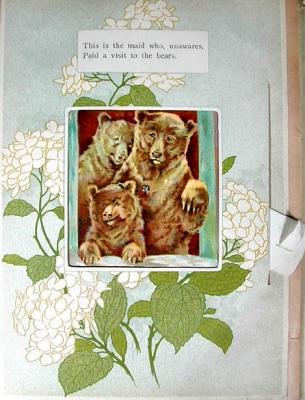 The third type of movable book Nister created was the revolving picture. The mechanism consisted of two disks that covered each other and were divided into six segments. Those segments in turn fit together in a star formation. When a tab in the frame was pulled, one disk slid over the other to reveal a new picture. 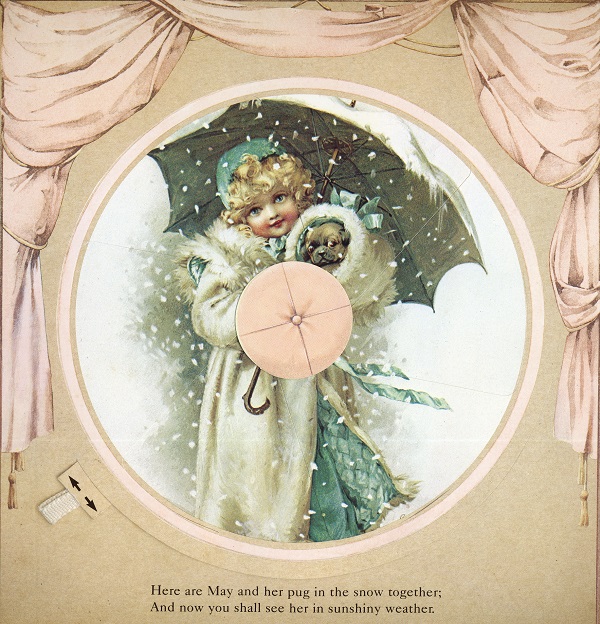 Ellen J. Andrews – Untitled illustration from the book In Wonderland (1895) (1) Ellen J. Andrews – Untitled illustration from the book In Wonderland (1895) (2) 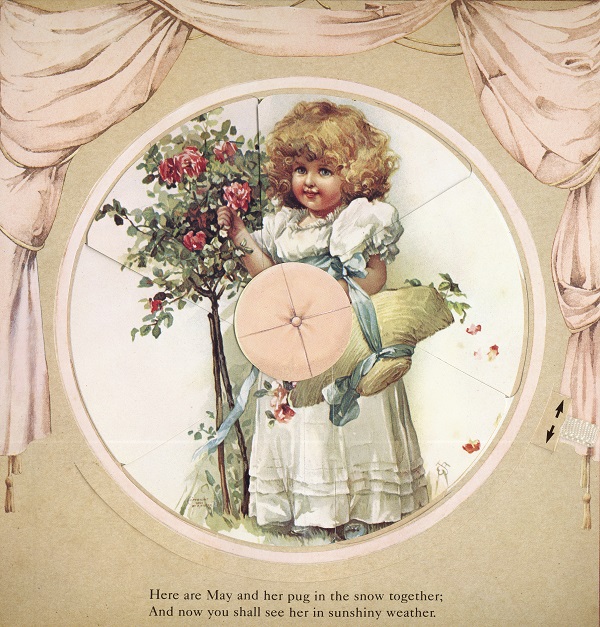 Ellen J. Andrews – Untitled illustration from the book In Wonderland (1895) (3)

As you would have noticed from the image descriptions there is a problem with finding the identity of illustrators for Nister’s images. The illustrator is largely unknown as Nister did not consider it important to leave the signature in the picture so it was either cropped out during editing or colored over during printing. Nister also constantly reused images and even added or deleted features to the original images. The date is also almost always omitted and if it had not been for researchers who are willing to go through library catalogues and find the earliest release of the books, it would remain unknown. 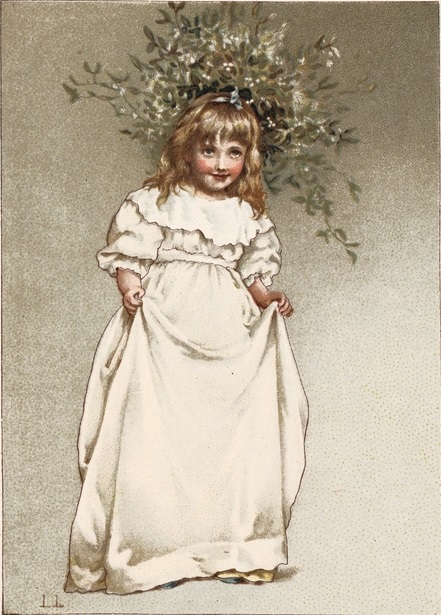 Lizzie Lawson – Under the Mistletoe, from the book Bobby Robin – (Unknown Date) 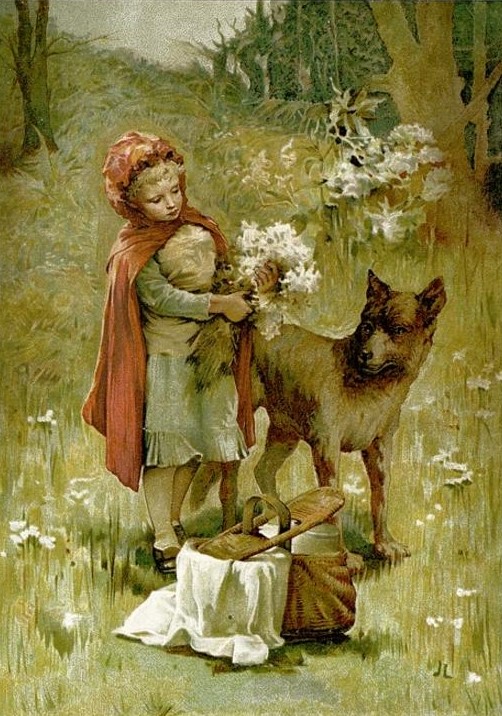 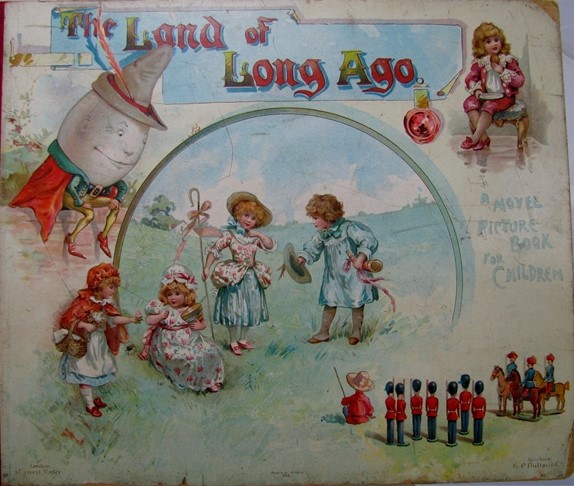 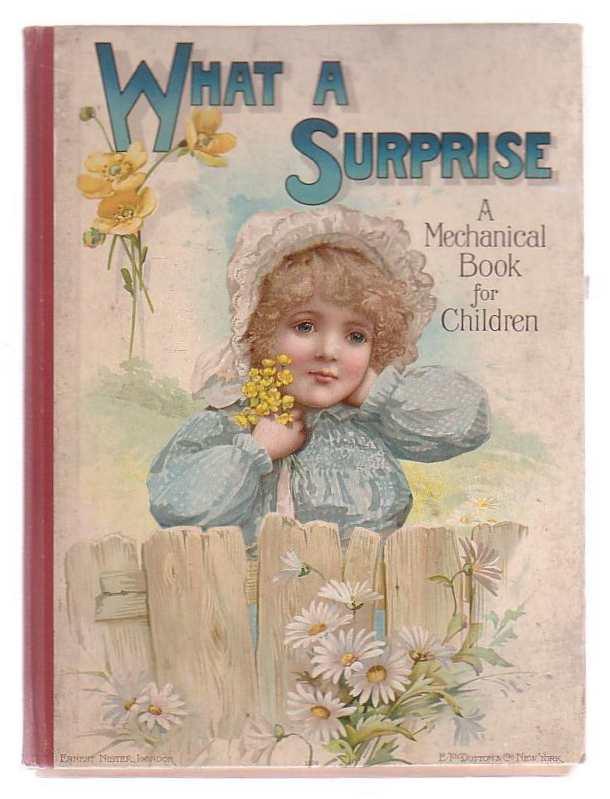 Nister died in 1906 and left the publishing business to his son Ernest Nister Jr. At this time the business had about 600 employees and could produce prints using the three-color, photoengraving, wood engraving, heliogravure, collotype, copperplate, halftone engraving, blind embossing and chromolithography printing processes. The business would not last more than ten years. As World War I started and an export ban was placed on Germany the Ernest Nister Publishing Company was one of the many businesses that collapsed as a result.

There are many videos on YouTube showing examples of Ernest Nister Books.
If anyone wants to research further you will need this source list as they are hard to find and contain so many more details. I used many of these in putting together this article.