Maximilian Esposito was born in Milan in 1969 and developed a passion for drawing and painting as a child. He attended a Liceo artistico (artistic lyceum) high school, receiving his bachelor’s degree in 1988. His early works represent populated dreamscapes of fantastic and mythological characters inspired by traditional fables of Europe. 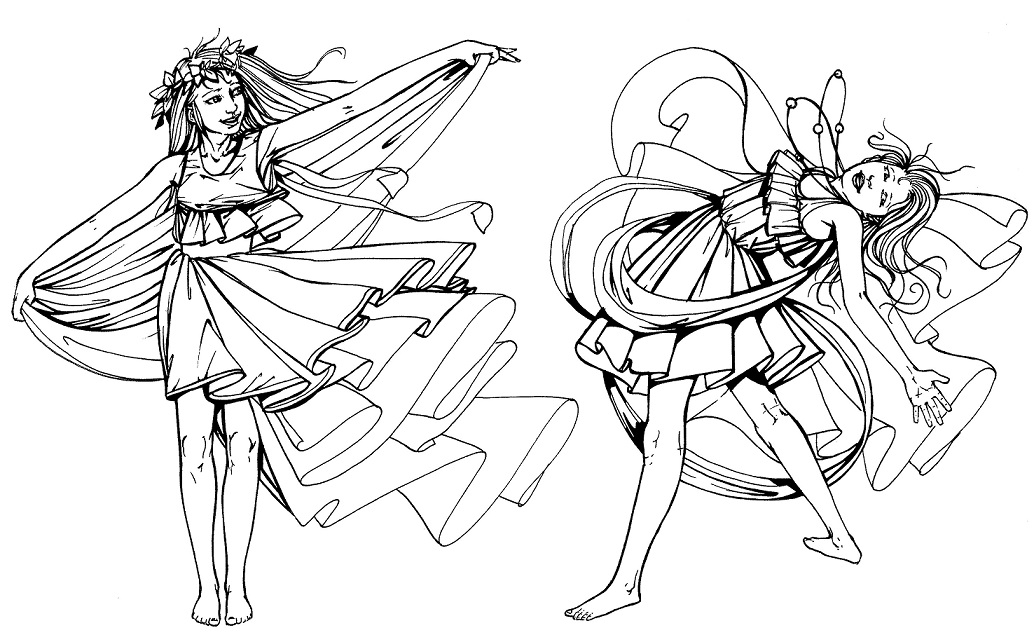 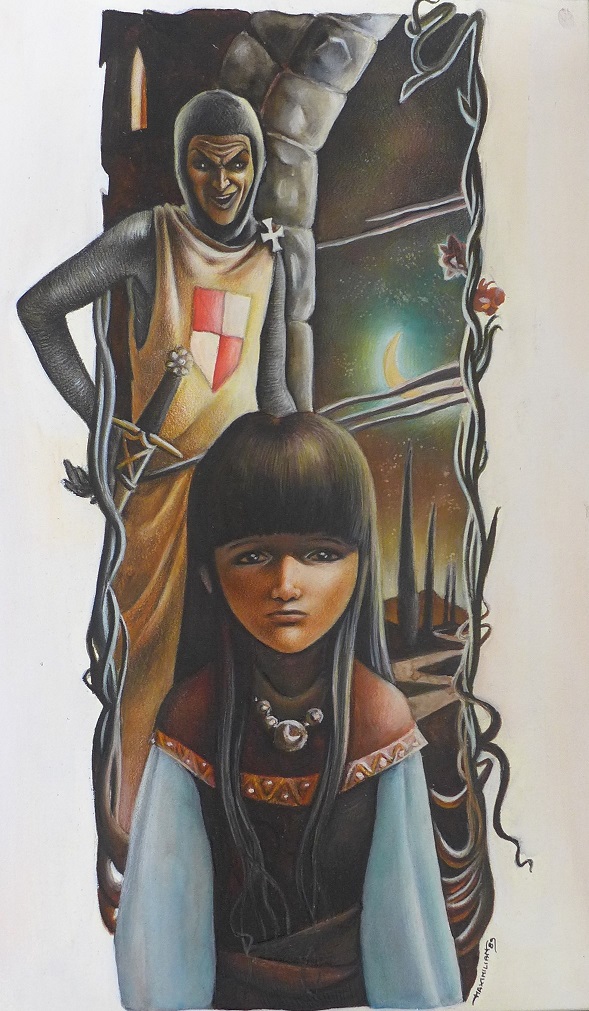 In 1992, he discovered the mural and had the opportunity to decorate private apartments and public places in Milan and surrounding areas. His style expressed his talent and interest in theatrical stage effects. In 1994, he traveled to New York City where he discovered a restaurant named Trompe l’Oeil (Optical Illusion) in Greenwich Village. Intrigued by the name, he managed to get a contract to completely repaint the walls and ceiling of that restaurant. Afterwards, he returned to Italy and began to practice yoga, opening a new chapter in his life. He dedicated himself to this craft and began teaching in Milan until 2012. Making another big change, he moved to Paris, initially devoting himself to photography but then rediscovering the pleasure of drawing, illustration and painting. Between 2013 and 2015, he produced several murals and illustrations, mostly in black-and-white. Yoga and art complement each other in his life—yoga serving as an art form and painting, a form of discipline and meditation. 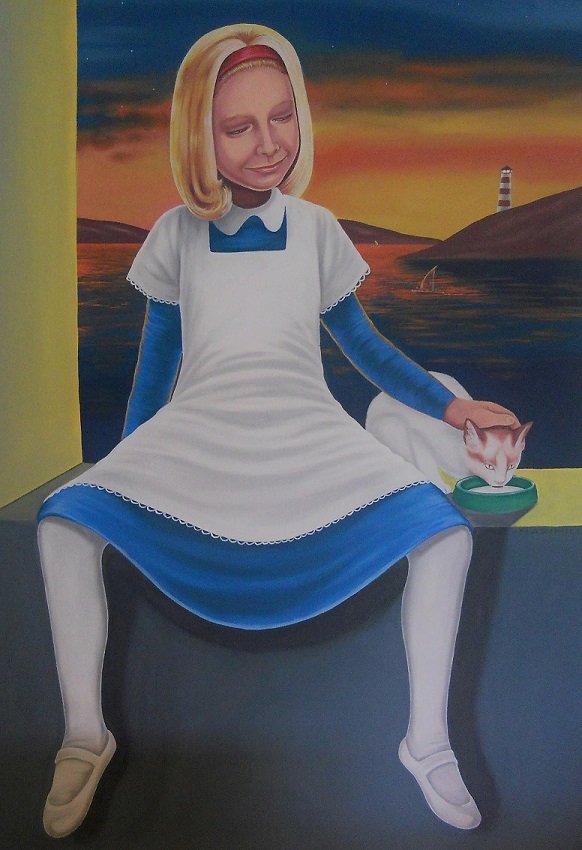 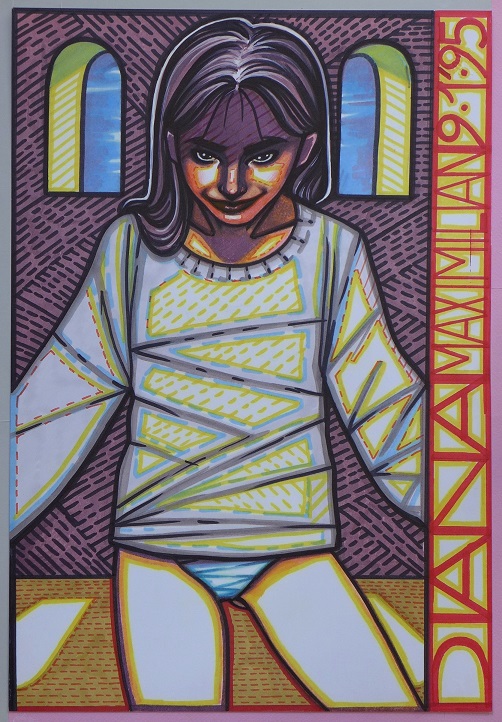 Two stories that have fascinated him the most were Alice in Wonderland and The Wizard of Oz. Although both stories have a fairy tale quality, they were creations of the last couple of centuries which carry with them a more modern perception of childhood. He had the idea of ​​creating an illustrated version of The Wizard of Oz in the early 1990s but never fully developed this project. Here are some conceptual drawings that reflect his special emphasis on medieval tradition. 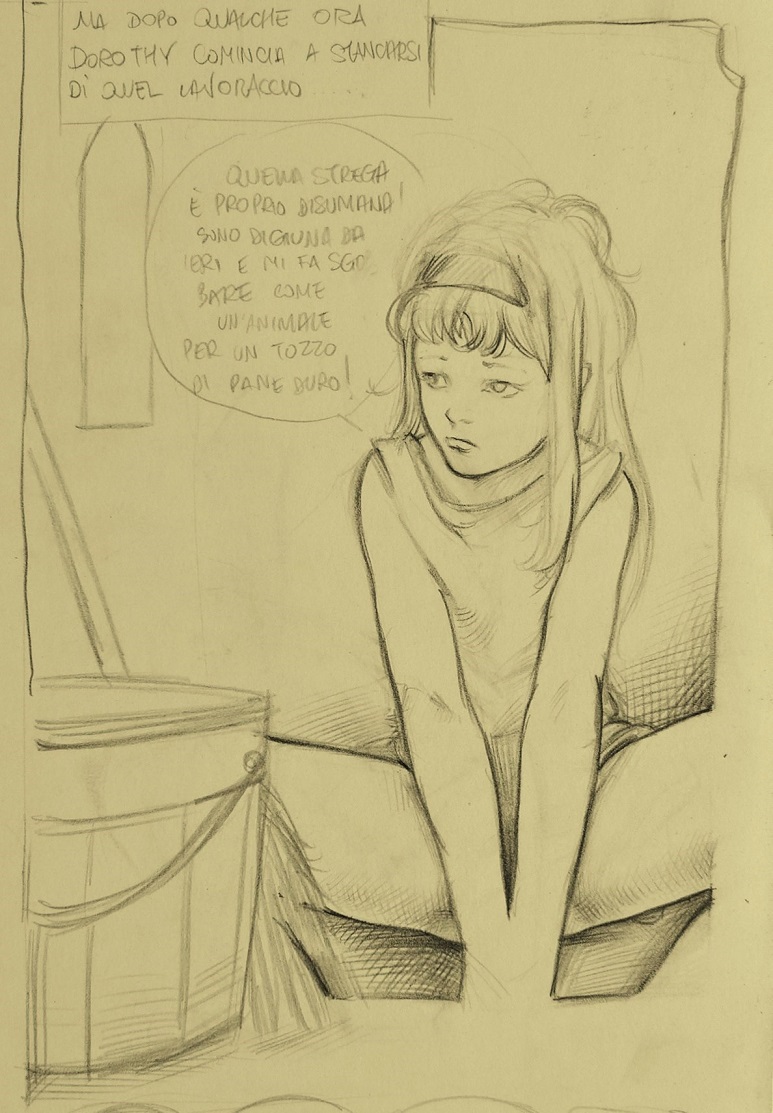 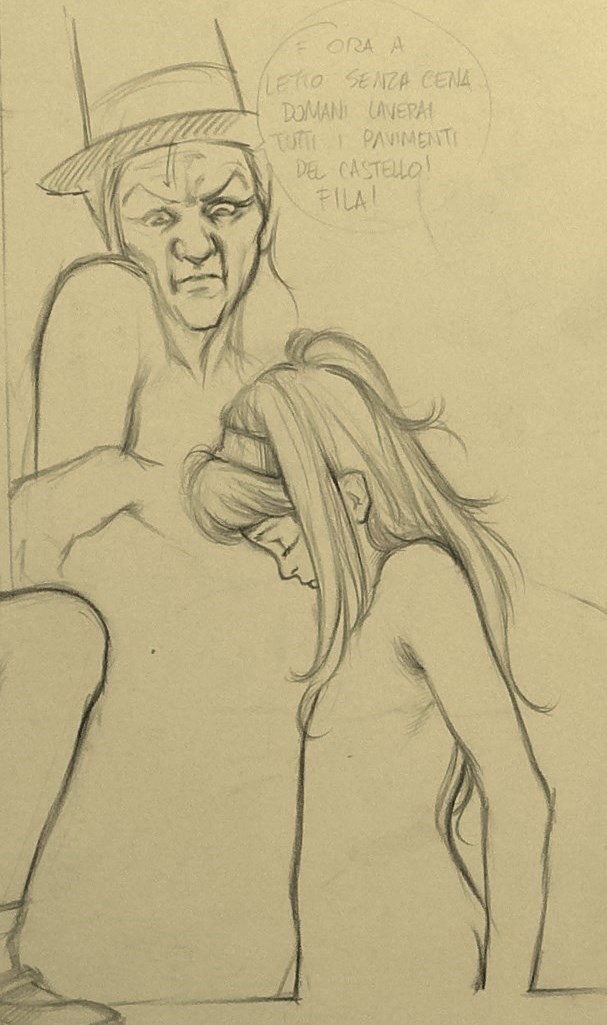 After moving to Paris, he resumed his work as an illustrator and painter but this time focusing on the figure of the young boy. This little boy is androgynous, much more feminine than masculine, and its eroticism is a refined and dreamy. The artist cannot explain why his artistic sensibility has lead him to the young boy. It is simply a product of his imagination, having no parallels to his personal life. Although his subjects and backgrounds are fantastic, the artist manages to express his personality through his characters. They perform the role of pre-adolescents placed in different contexts. This age range offers the greatest emotional tension as they represent the transition between childhood and adulthood. It is the stage of life where the innocent games of youth give way to the anxieties of adult responsibility. 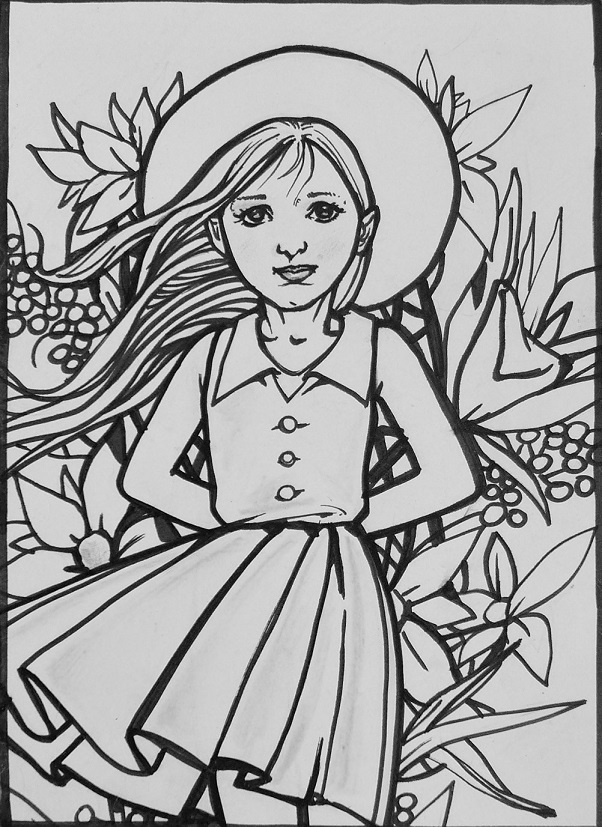 What makes his illustrations stand out are the intriguing compositions and the surreal elements incorporated into the works. 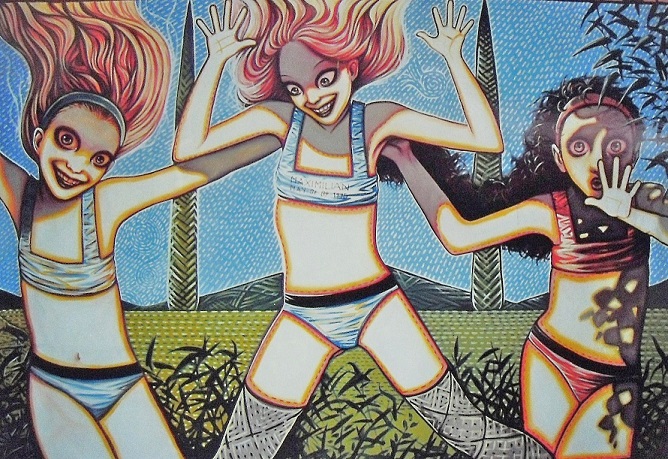 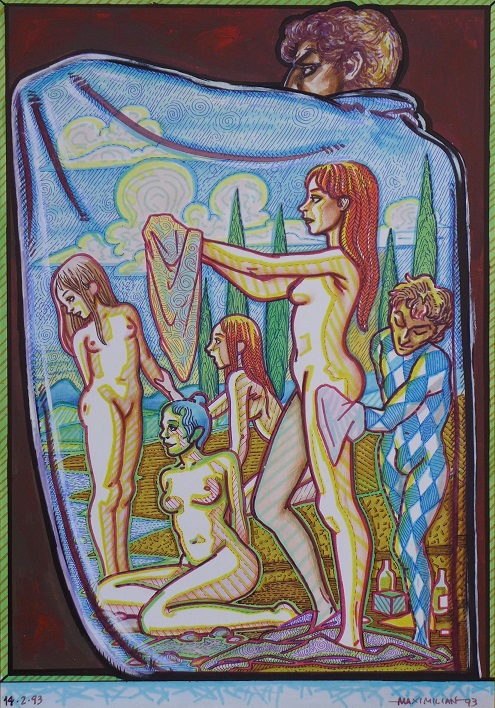 Unfortunately, very few seem to appreciate this kind of artistry today. And finding people and publishers to hire him has been a frustrating endeavor. Finding a site like Pigtails in Paint has given him some hope that some may appreciate his style. Whatever the future may hold, he is determined to continue to express his artistic universe sincerely and without hypocrisy. Should he gain sufficient recognition, he will be able to continue working on projects for which he is best suited—namely those that feature older children with a delicate disposition. 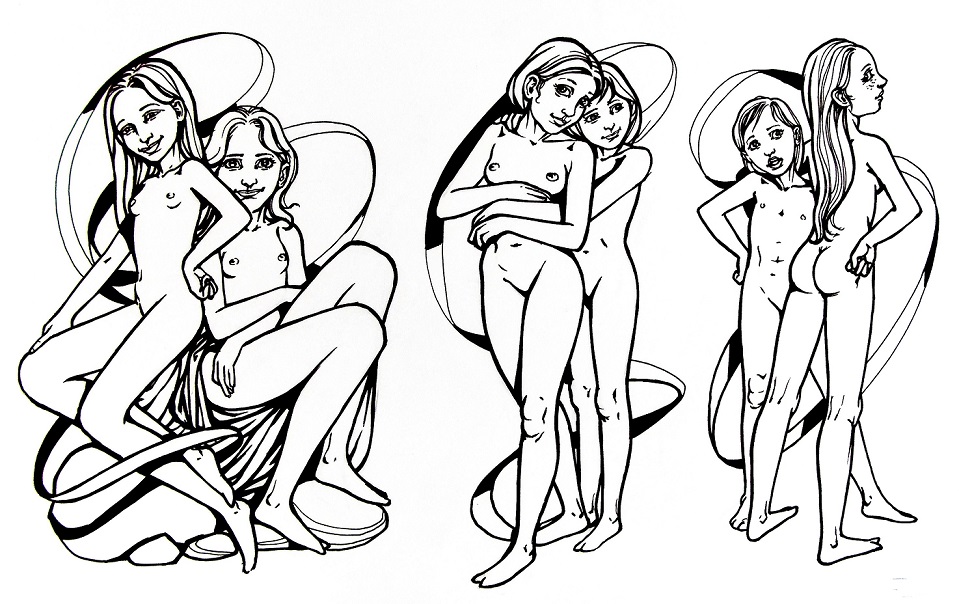 Although the artist often chooses popular subjects, readers will undoubtedly have questions about context and interpretation. Pigtails will be delighted to publish some of the more apt examples. You can visit these sites (here and here) for more samples of the artist’s work or for contact information should there be a suitable commission available.

Given the large time and conceptual gap between Esposito’s older and newer work, the artist has decided to establish a web page focusing on his older unpublished material which may be of interest to Pigtails readers.

1 thought on “Without Hypocrisy: Maximilian Esposito”