Ovenden Collection Returned! Sorry this item is a bit late, but it has been reported that the Metropolitan Police have returned most of the rest of Graham Ovenden’s collection of photographs and personal sketches (including those by von Plüschow and other samples from the Pierre Louÿs collection).  Except for creases in a few cases, they have been returned in remarkably good condition.  This is an indication that the Police would like this matter put to rest.  There is still the matter of the appeal regarding images ordered destroyed by Judge Roscoe.  The date for this hearing has not been set.  For those who have not been following this story see here and here.

An Edwardian Model’s Account: I was excited to learn that after the publication of Victorian Children by Graham Ovenden and Robert Melville in 1972, one of the models featured in that book wrote to The Times (UK) to give an account of her experiences.  I would like to appeal to our readers to find that article in The Times’ archives or perhaps someone out there had the presence of mind to save that clipping.  In any case, it would be a real treat for all of us if Pigtails in Paint could post a transcript.  Neither photographer or model are identified in the book. 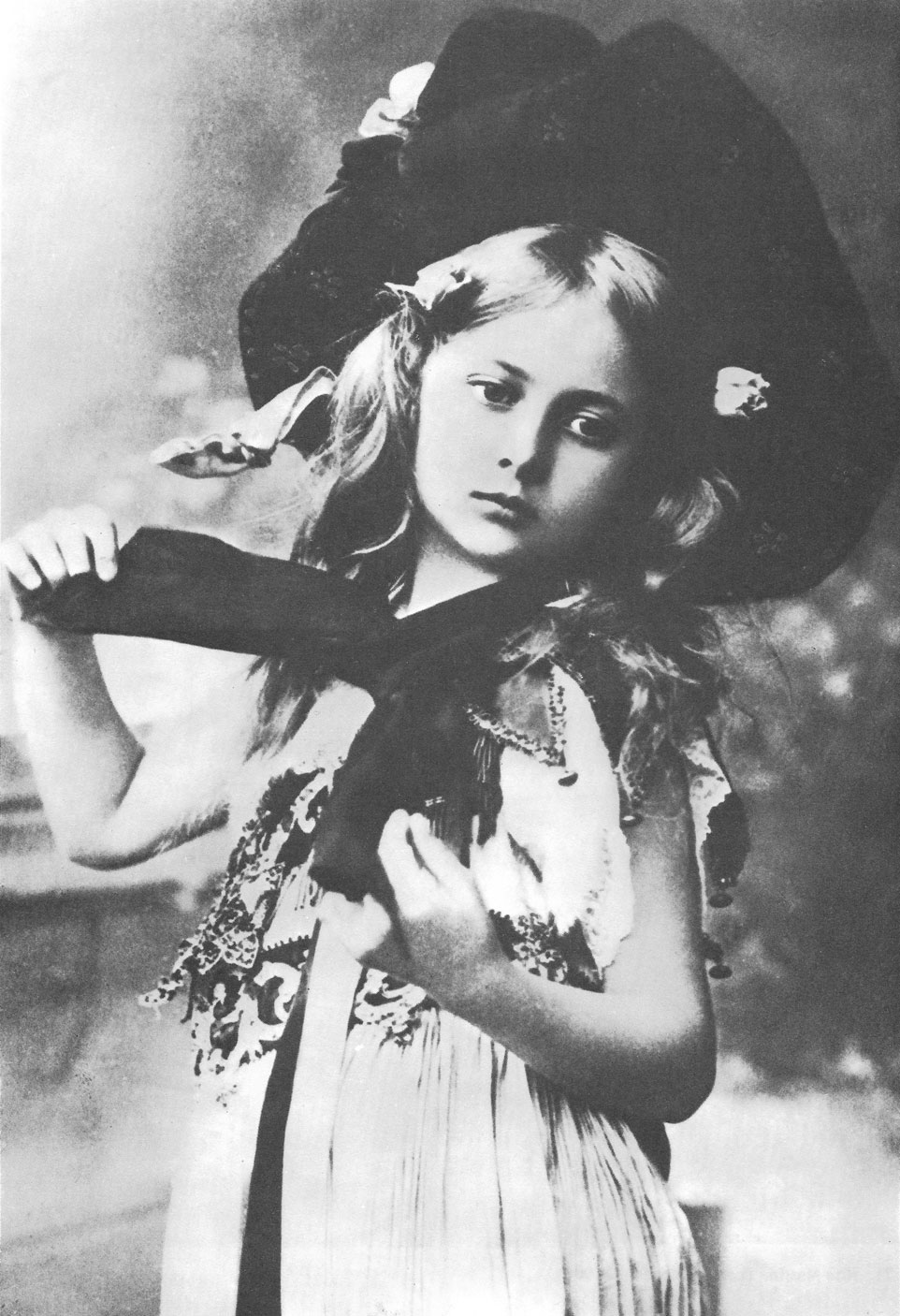 I am also delighted to announce that, for the first time, a model came forward to identify herself (and attempt to reach the artist’s son), due to the images we posted.

Japanese Transcribers/Translators Needed: Given the success in soliciting French transcribers last month (the Bourboulon articles have all been transcribed, Thank You), I thought I would try asking for some help in Japanese.  There are new readers to Pigtails all the time and these newcomers have not yet explored the various support pages, so this is my way of reminding people that this is a volunteer enterprise and depends largely on the contributions of readers.  I know many people fluent in Japanese are not comfortable with translating, but transcribing just requires a familiarity with producing Japanese characters on the computer.  One of the reasons this site does not cover more photo-Lolicon artists is because of the time lag in translating the written material available to us.  I also remind readers that there is a journal by Hajime Sawatari already transcribed here and that using Google Translate does not work because it is written in a kind of shorthand and requires the fluency of a Japanese native.

Double Censorship: There was a short piece in the Huffington Post about Danish politician Mette Gjerskov who had her photo of a Danish statue of The Little Mermaid rejected due to nudity.  It demonstrated perfectly the absurdity of arbitrary standards that do not take into account context and good judgment.  Then I discovered the Huffington Post was censored so we cannot view that article and the “offending” image.  Fortunately, there was another source which added that, even though Facebook reversed its decision, the image could not be used due to copyright infringement!  Even though the apparent age of the figure falls outside the scope of Pigtails, it is tempting to post it here as a form of protest.

And Speaking of The Little Mermaid… Zek found a site that published a cache of drawings from the Disney Studios.  Apparently, the animators were coming off of Oliver and Company and being assigned to The Little Mermaid.  Since these artists hadn’t drawn human beings for a while, it was thought that they could use a little practice to get up to speed. So these became the earliest concept drawings for Ariel.  The site also included these nude studies.

Hysteria over Parental Affection: Ex-Australia footballer Craig Foster received some flak after being filmed affectionately stroking his 8-year-old daughter.  This public “spectacle” took place during the national anthem of a football match he was to play in and in which the girl was serving as mascot.

The Corbis-Getty Merger: In my early days with Pigtails, I sought to find stand-alone images that could be used for short posts on the site. Often I found that there was a deeper story behind an image and a short post was not always possible. This happened many times as with an image, made into a postcard, of an overhead view of a ballerina (from the Bettmann Archive). With the idea that there may be many interesting images on that site, RJ graciously agreed to visit the site and find images that might be of interest to our readers. Another example was a photograph of Hopi girls in a recent post. I received a press release on January 22nd about Corbis’ sale of its content licensing business and became concerned that RJ’s links might not be valid after the transition. So for the next few weeks, I will be sharing his discoveries as part of the ‘Random Images’ posts with whatever background information I can find—and requests for better information from our informed readers.

The sale was to Unity Glory International, an affiliate of the Visual China Group (VCG) and will include the images and motion archives from Corbis Images, Corbis Motion, and Veer. Getty Images will become the exclusive global distributor of Corbis content outside of China. The images from Corbis (including Bettmann and Sygma Archives) will migrate to gettyimages.com where it will be combined with Getty Images’ collection of almost 200 million images and videos, including historical photography and the Hulton Archive (the largest privately held archive in the world). Naturally, with all this talk of business and private collections, we should all be concerned about what this means to the general public. This is certainly a benefit to paying customers, but what about archivists on a shoestring budget? Is this part of a continuing trend of putting information that was once openly accessible behind a paywall? Aaron Swartz had similar concerns about academic journal articles.