Pip wanted to do a piece comparing two short films illustrating different ways children cope with abuse. The first is De Suikerpot (The Sugarbowl, 1997), written and directed by Hilde van Mieghem and the other, a Russian film, will be covered in a future post.

Watching this film, it is clear that van Mieghem (b. 1958) knows her subject matter personally. The film is a blend of a true-to-life account interlaced with artful symbolism resulting in a grim little jewel.

In the beginning of the film, we find little Kristien (Aline Cornelissen) humming while making the morning coffee. One of our first clues to the dynamic about to play out is when she decides whether or not to take a sugar cube for herself and decides, “No, because I am a good girl.” Besides the recurring motif of the good girl, we begin to understand the sugar as symbolic of the girl’s tactic in keeping peace in the household.

The first sign of apprehension is that we hear the dog, Woelfie, in the background barking. Kristien goes out to tell him to stop or he’ll wake up mommy. She goes into the refrigerator to find a leftover steak to shut him up. 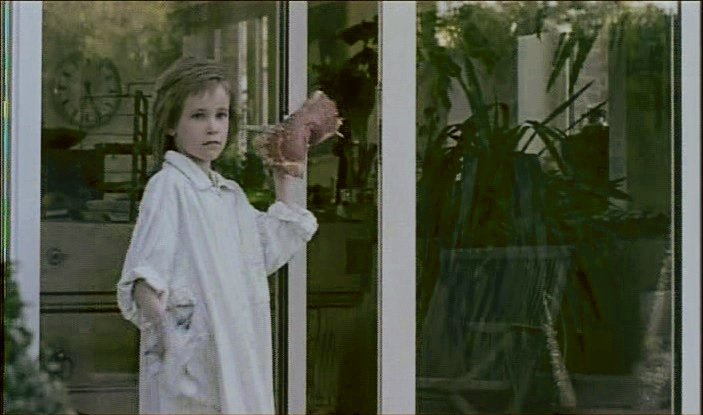 In the casting process, over 300 girls were auditioned with ten finalists for the director to meet personally. Cornelissen was the first and seemed to understand what van Mieghem wanted exactly. We see our first glimpse of this little actress’ skill when she first enters the bedroom. We can see that there is some kind of tension as she does not have the kind of cheerful expression one would expect. 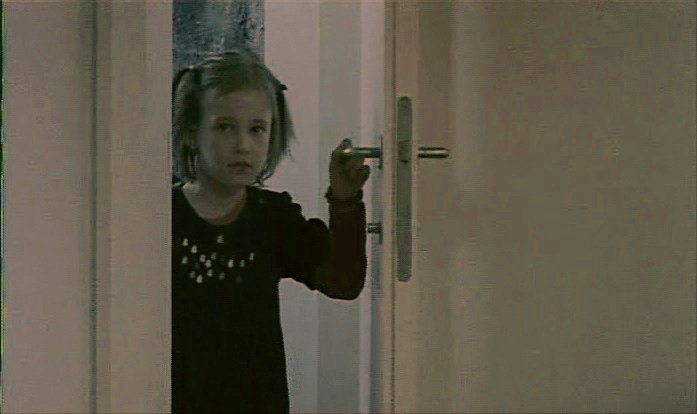 First, we see she has a loving and playful relationship with her father (Dirk Roofthooft) as they horse around a bit before mommy (played by van Mieghem herself) wakes up. The moment she wakes up, she has an accusatory tone. The two go into the kitchen to see that Kristien has made the coffee and there is a moment of joy. 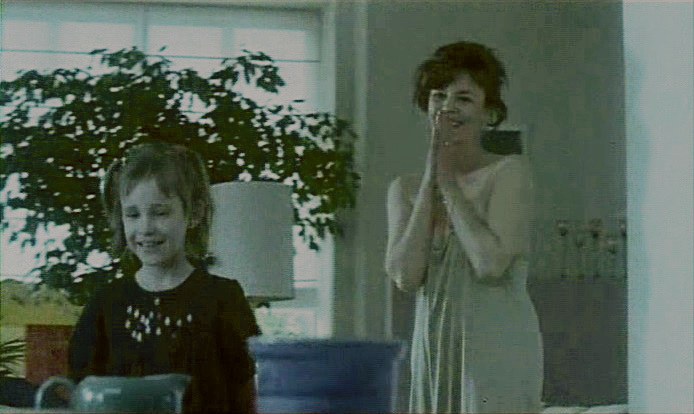 She has also made a drawing of “Queen Mommy”. The family have a peculiar custom of calling each other by royal titles: King Daddy, Queen Mommy, Princess, Lady, Your Majesty, etc. However, mommy’s level of control is that of an omniscient. She tells Kristien that she has a pair of special glasses so she can see what she is up to at all times. Suddenly, there is a cut to the boiling kettle and inexplicably mommy explodes, hitting Kristien. Van Mieghem used her own sister as a body double so that the little actress would not be receiving any blows, even make-believe. This time, daddy manages to intervene, sending Kristien to her room. 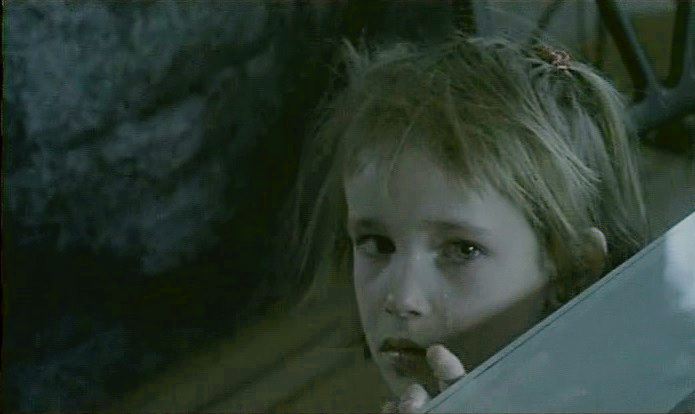 This is a surprising detail since often a man in this kind of relationship is a rather helpless figure. Mommy cries that she cannot take any more of this miserable rat of a child and that Kristien must go. Next, the film cuts to her arrival at a parochial boarding school. 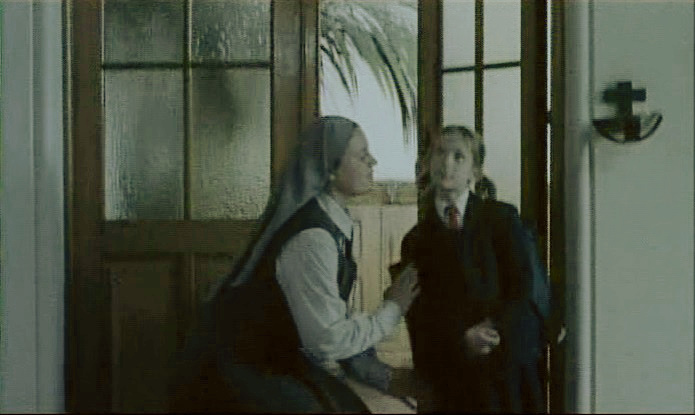 It is explained that she will sleep there and Kristien protests that she wants to stay at mommy’s house. 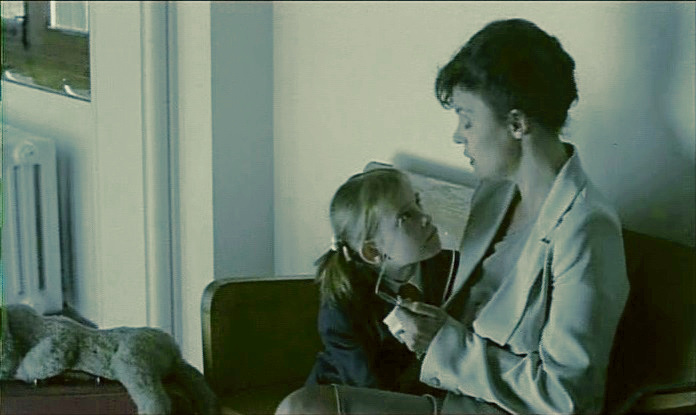 This may seem strange since this would be an opportunity for her to escape her abuser, but these relationships are more complex than most people realize. Young children unconsciously assume that all families are pretty much the same until they get older and observe the differences. To Kristien, all women probably have this violent side and men are kind, sometimes playing the knight in shining armor. With mommy at least, there is the idea that she will be loved so long as she can manage to be good—an ethos reinforced by a parallel religious doctrine. And Kristien has a better hope of manipulating someone she is familiar with, not so with the Sisters at the school. When mommy goes in to work out the arrangements, Kristien runs away. 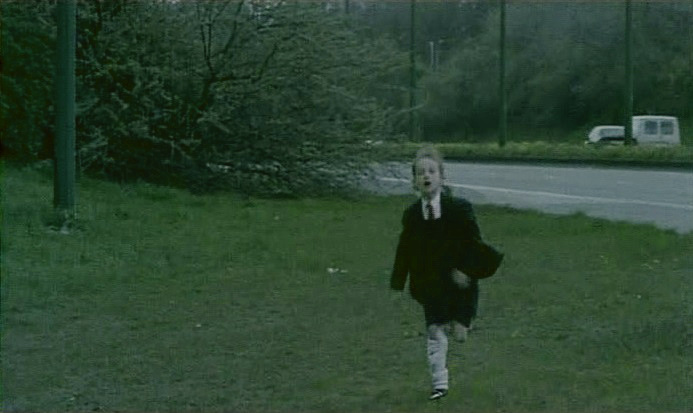 Mommy is frantic and disconsolate while looking for her little girl. Kristien comes upon a kind woman (Els Dottermans) and is given a ride home. 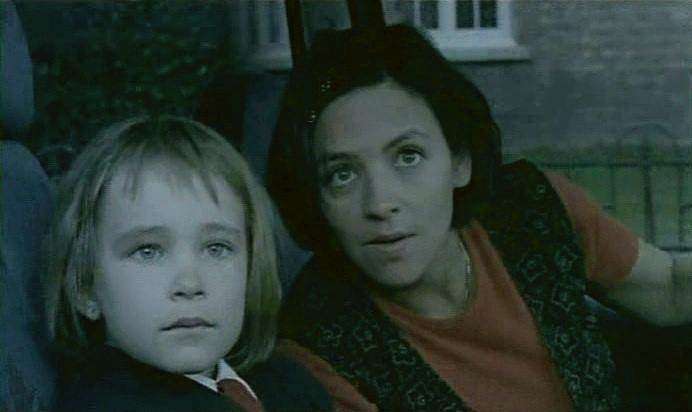 The woman offers to walk Kristien to the door and is told that mommy will be mad that she was with a stranger and will hit her. Assuring her that she would keep that from happening, Kristien panics and punches the woman in the belly, telling her she cannot always be there to protect her, and runs off. 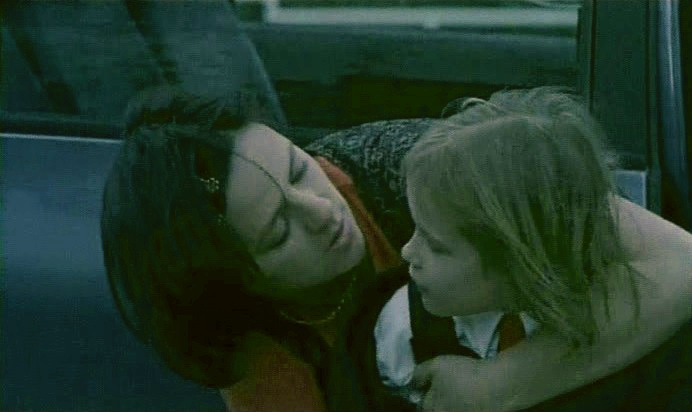 Van Mieghem admits she is a control freak and as such, she stuck strictly to the storyboards, perhaps missing opportunities to make improvements. For example, she did not notice that Dottermans was actually pregnant and could have made much more of it in the story. If this had been more clear in the film, the punch would have made a potent symbol, a way of telling the fetus of the harsh world it will face. In her full-length films to follow, van Mieghem has learned to take advantage of such serendipitous opportunities during shooting.

Kristien does not walk into the house right away but hides until daddy comes home. Then she enters and mommy is overjoyed, lavishing her with affection and promising her special treats. 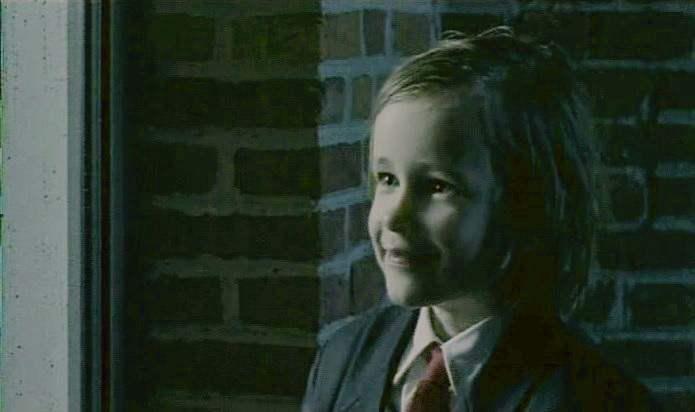 Mommy promises not to send Kristien away any more and daddy goes out to get the promised treats. She begs daddy not to go and he tries to reassure her that he will only be a short while. Meanwhile, mommy has a brainstorm; she will heat up that leftover steak in the refrigerator. I believe this scenario is meant to convey the idea that no matter how much you try to control a situation, the smallest detail will always foil your efforts. Kristien, realizing the danger, tries to cover up the fact that she gave it to Woelfie and tries to surreptitiously dispose of the remains, but she is caught. And the violence begins all over again with daddy unavailable to protect her. 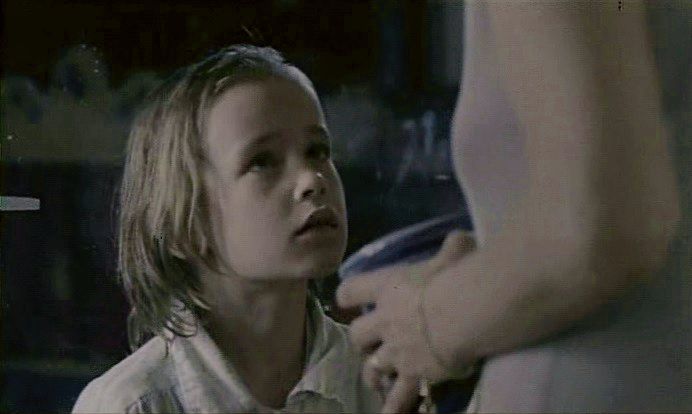 In the end credits, Kristien is singing the same song we heard in the beginning, but this time we can hear the lyrics:

In a video interview, van Mieghem says this story is absolutely autobiographical. But an alert viewer will not need to be told this, given the expert execution of this story. She was abused like this and wanted to tell the story in a way that would make an impact on the audience. In her youth, she was a consummate actress, but was too young to pursue her dreams as a director. At 33, she finally attended the LUCA School of Arts in Sint-Lucas to learn this craft. Shot in five days, De Suikerpot was her debut and her only short film, but also the one with the greatest social impact. Her next film, De Kus (The Kiss, 2004), featured her own daughter, Marie Vinck. At first, she wanted complete control of the production process, but the demands of full-length films are formidable, so she has contented herself with just directing.

I would like to thank Dimitri for translating the video interview of Hilde van Mieghem presented by Filmfestival Oostende.