The next few random images have an interesting story.  When Pip was considering inviting me to be his partner on this site, he decided to test my aesthetic and my writing ability.  He sent me several images and wanted me to comment on them.  Before I could reply, he decided the test was not necessary and explained the reason for sending them.  They are still quite memorable and have yet to be published on Pigtails.

The first artist is Elene Usdin, a French photographer raised in Quebec.

I was terrified of my dolls when I was little. I used to think they came alive at night, that they’d open their eyes and come at me. I used to have nightmares.  -Elene Usdin, British Journal of Photography, April 2015

Her first work featured her naked self in carefully staged shots, turning the notion of woman-as-object into a farce.  She tries to take the tiresome consumerist view of the female body and turn it into something fresh and surreal.

Usdin attended the École Nationale Supérieure des Arts Décoratifs and painted cinema sets and worked as an illustrator in Paris.  In 2003, she had a boyfriend who was a photographer.  She picked up his camera and started taking pictures for her own amusement, but learned she could create stories using this medium.  At first, she was uncertain of her ideas and uncomfortable asking for help, so she rigged the camera so it could be triggered remotely.

The images in this series means ‘It was a pea’ which definitely plays with The Princess and the Pea story, perhaps one of the most absurd portrayals of feminine nobility.  And it does appear that Usdin gained the confidence to find a young model for her imagery. 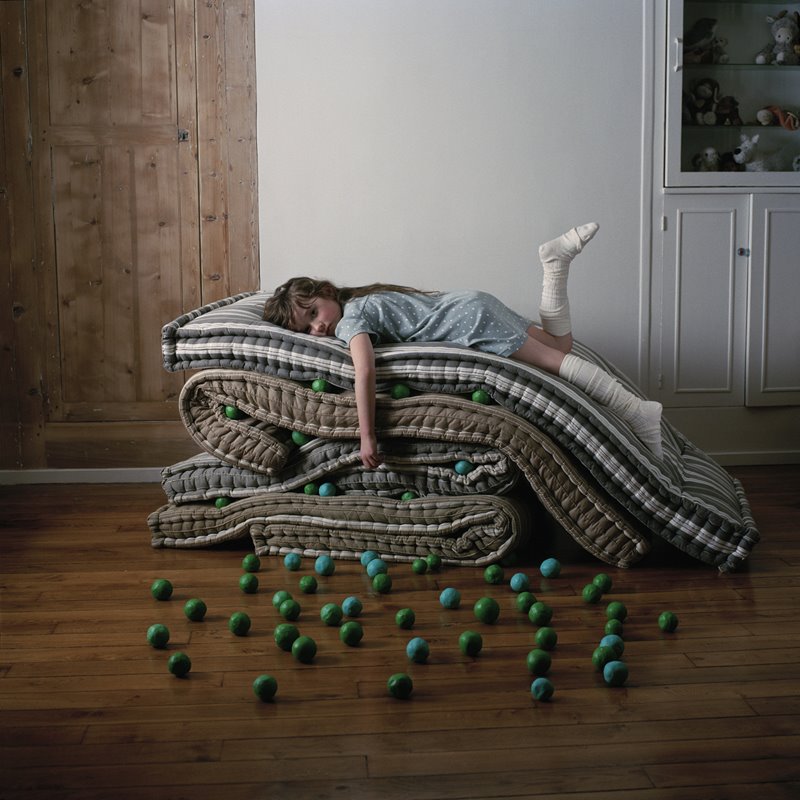