I was just informed by a close colleague that I am incorrect on both counts regarding my suggestion that these images are mannequins.  Please read the notes at the bottom for clarification. -Ron

The last two of Pip’s “test” images are not photographs of actual girls.  Depending on your definition, they might be called dolls or mannequins.  When I got these, I had just learned that there was a whole artistic discipline dedicated to producing these dolls, not to mention the collectors who restore them.  I acquired a couple of books on the subject which I will review in due course, but I am hoping someone will come forward who is more expert than I am to inform readers about this remarkable field.  The artists credited here are the photographers, not the producers of the mannequins. 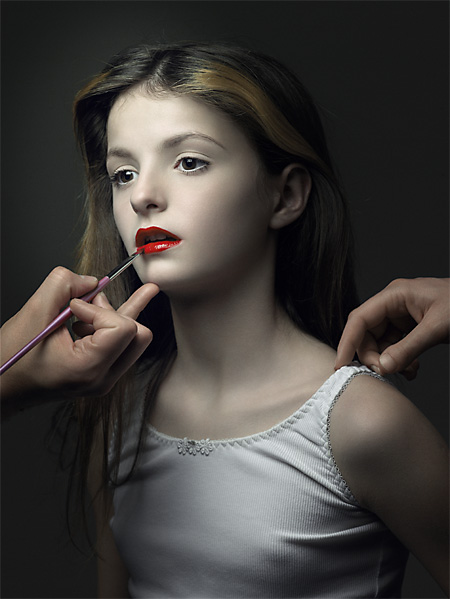 After examining Jacqueline Roberts’ curriculum vitae and body of work, Pigtails will have to do a proper post on her at some point.  She was born in Paris in 1969, studied Political Science and then took up the camera.  She is completely self-taught.  Her key inspiration is Julia Margaret Cameron and like her (and Sally Mann), she likes to work with more antiquated photographic methods.  She feels today’s techniques make the images too disposable and she wishes to make them “precious” again. 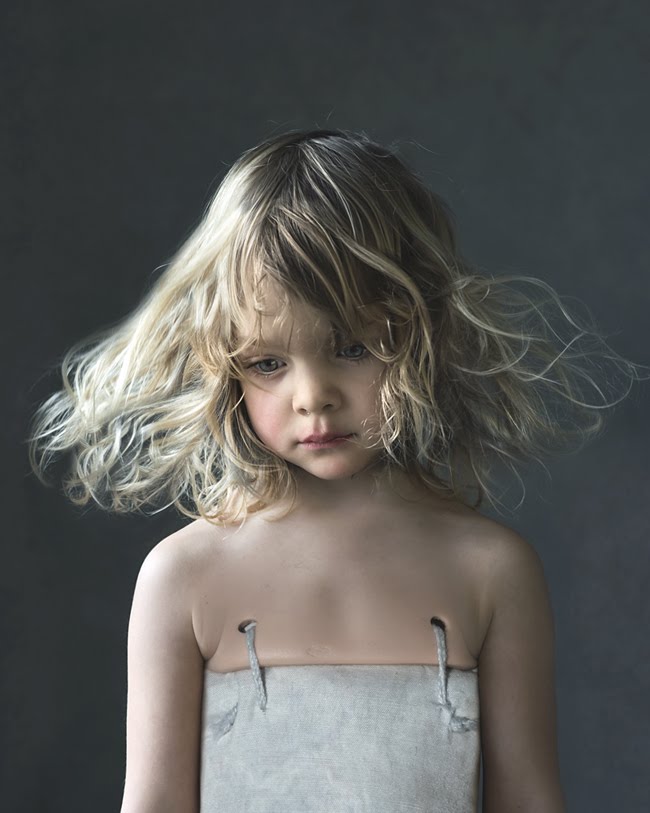 Comment: I recall that the first image went along with some article about the sexualization of girls or something of the kind. It is intended to convey the idea of a girl who is basically a toy of the fashion industry. If you look at her shirt, you can see her nipples are very much rounded and a little dark; they wouldn’t do that on an actual mannequin. The second image is of Jacqueline Roberts’ daughter. You can see her in several of the series at her website, especially ‘Kindred Spirits’ and ‘Under the Influence’. The photo has been digitally manipulated. If you look closely, you can see where the mannequin ends and the real girl begins about halfway up her chest. The mannequin is slightly shinier and a little different color.

My Response: Well, it appears that I failed the test here.  The reason I thought the first image was a mannequin was because the way the shirt hung on the shoulders (and to some degree, the look of the clavicle).  It didn’t feel as though it “stuck” properly like it would on real skin.  I have to disagree about the level of detail that are put into these dolls. Perhaps an ordinary mannequin would not have this kind of detail, but realistic dolls do (and I hope to feature some here).  I did visit Roberts’ site and noticed that same girl and so I did have doubts, but with digital manipulation, how can we be sure whether an image is digitally manipulated or an artist has produced a hyperrealistic doll?  I suppose it would make sense to assume photographic manipulation since it is much easier to do.  But I would like to assure readers that there are some dolls out there that look shockingly like the real thing, especially when viewing only the bust.

There is a French PDF file where the author discusses Adelina:

Anoush decorates including all two years a collection of sequences starring Adelina, 11 years in 2005, fidgeting on the tube of the moment like video clips passing loop on MTV. A way to show – by the passage from childhood to adolescence and then adulthood – the time that passes and amends the concepts of innocence and self-awareness. “Me, I like the faces and bodies that will mark. It’s something that interests me, decrepitude.” As Aimée, she explores the possibilities of the portrait replacing for example lawyers to place in their office, young girls in their boarding room or adult women in the House which saw them grow. “When I finally have a little time for me, I start to think about the time that passes. And this is what frightens me the most, because we cannot fight against the daily that takes you on his race and that you can follow.” In photography, the time that passes seems much more present than we imagine ultimately.

Apparently there was a plan for a whole series of photos featuring Adelina, at age 11, as she transitioned from childhood to adulthood.  It is not known if this project was ever completed, but there seems to be only this single photo posted online.  At least some other photographs must exist and perhaps someone fluent in French could contact these photographers to discover what became of them.