We move away from France for the moment and examine a living Swedish sculptor by the name of Peter Linde. For an artist who’s still living and working there isn’t much info about him on the web, so let’s just go right to his work, shall we?

The first piece we’ll look at is called Lärjungen, or The Student. The sculpture sits in a space near the Kulturhuset (House of Culture), in Sergels Torg. She sits serenely on her block, holding her feet, attentive to whatever or whoever it is she is watching. With her crossed legs and curious gaze she reminds me very much of statues of the Buddha. The model for this piece was Linde’s own daughter.

Here you can see the bottom portion of Edvin Öhrström’s sculptural tower Kristall, vertikal accent i glas och stål (Crystal, Vertical Accent in Glass and Steel), the centerpiece of the large fountain at the center of Sergels Torg, added in 1974.

Here it is again seen in the evening, fully lit. I love this shot!

Through rain or shine our little student never stops learning!

Now this cute little lass is called Mimi, and one version of her stands outside of Kyrkbyn in Göteborg, Sweden. The other is in Östersund, Sweden. Little Mimi has well-formed thighs which provides her an easy stance, and she seems to be captivated by something in her hand. A ladybug maybe? 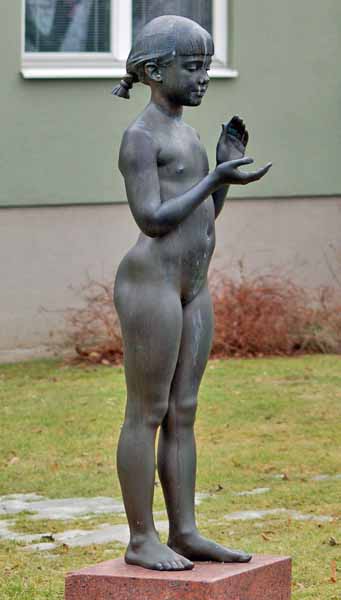 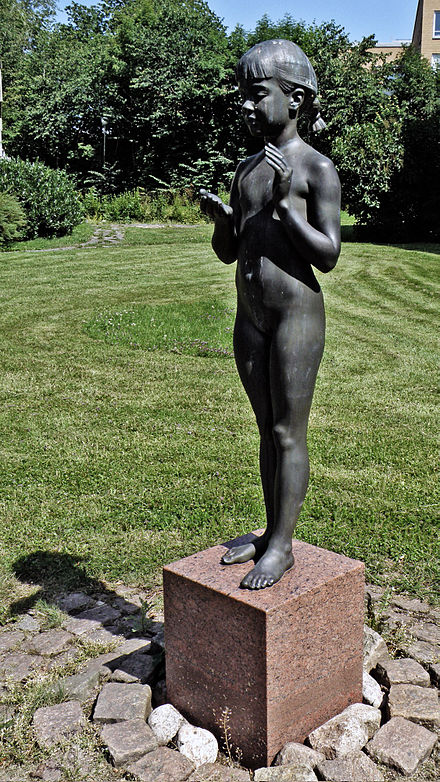 Edit: I added a couple more images for Mimi, taken from Linde’s website. I also found a page with a good amount of info on Mr. Linde at this site. It’s all in Swedish though so no clue what it actually says.