In the course of working on Pigtails, I have to view a lot of films that feature little girls. Some are good, some not and some defy classification. One was The Belles of St. Trinian’s (1954) and after watching it, I knew I had to review it because of its unusual portrayal of girls. Upon further consideration, I could not help wondering where the idea for the film had come from.

After leaving school at the age of fourteen, Ronald Searle (1920–2011) took night classes at the Cambridge School of Art. To pay for his tuition, he worked various jobs: solicitor’s clerk, parcel-packer and clerk at the Co-op. At fifteen, he became the resident cartoonist on the Cambridge Daily News and in the next year began contributing to the student magazine. A scholarship awarded in 1938 allowed him to study full-time at the school. In April 1939, he joined the Territorial Army as an Architectural Draughtsman and saw his first drawing published in the Daily Express that November. His military service then took him to the village of Kirkcudbright in Scotland, which happened to be an artist’s community. One of his most welcome ports of call was the home of the Johnston family. One day, as a purely domestic joke, he made a drawing to please the two schoolgirl daughters who attended an academy by the name of St. Trinnean’s.  He was encouraged to include it with a small number of cartoons he was hoping to submit to the monthly magazine, Lilliput.

Searle, however, had been posted abroad before publication and within a month of his posting in Singapore, the Japanese invaded. While under fire, Searle found a copy of the October issue of Lilliput and saw his cartoon in print for the first time. After the British forces surrendered, Searle was listed as missing and no more was heard of him for almost two years. On December 29, 1943, the Red Cross finally informed his family that he was in fact alive.

During his incarceration as a prisoner of war, Searle continued cartooning and drawing secretly, recording many of the atrocities he witnessed. The Japanese were aware of his activities, and for three months in 1945 he was allowed to draw murals at a beach villa and officer’s club. In August 1945, a ceasefire was declared and he returned home that October.

An Assistant Editor at Lilliput noted that he picked up his career right where it had left off.

…[Searle] walked into our offices bearing a neat folder containing seventy-two cartoons. They were drawn in faded brown ink, on stained and yellowing paper. Some of them were crumpled. Most of them had survived burial in the jungle undergrowth or under disease-ridden mattresses, where the Japanese would be unwilling to search…We asked him for more and published them every month for the next three years. -Kaye Webb, November 1945 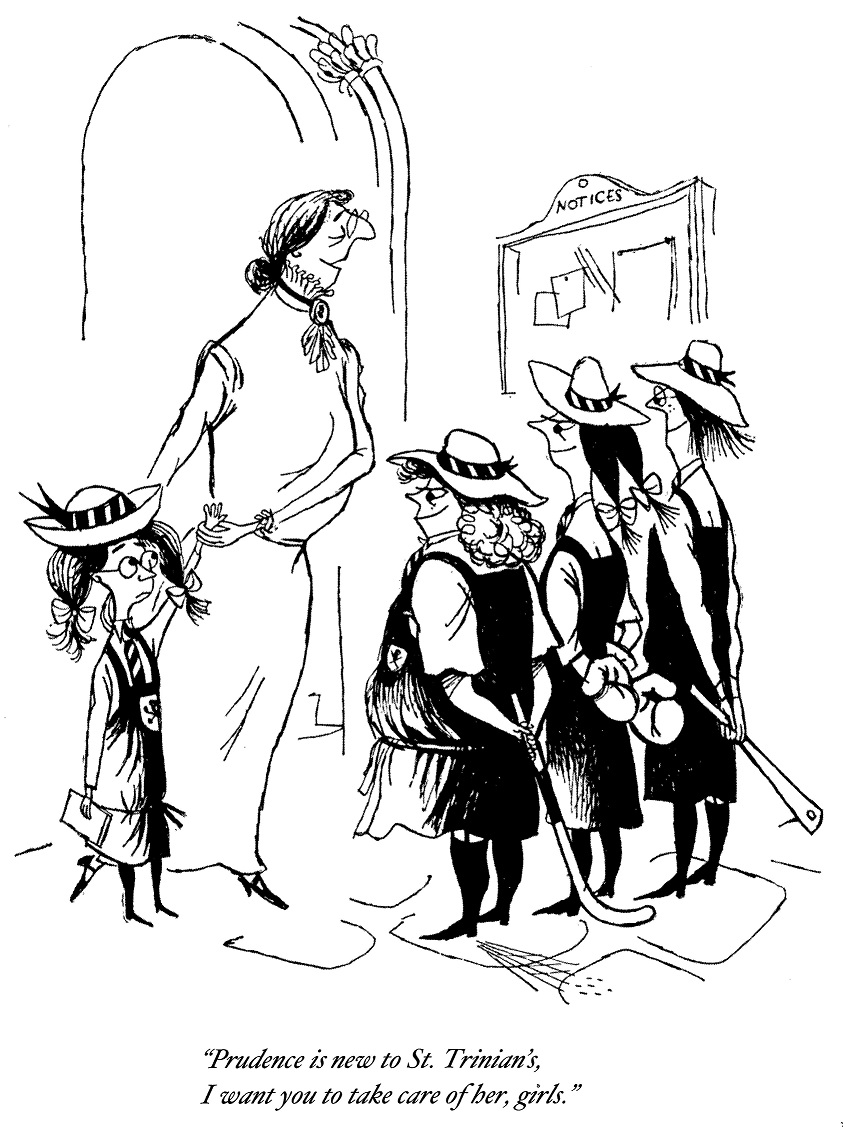 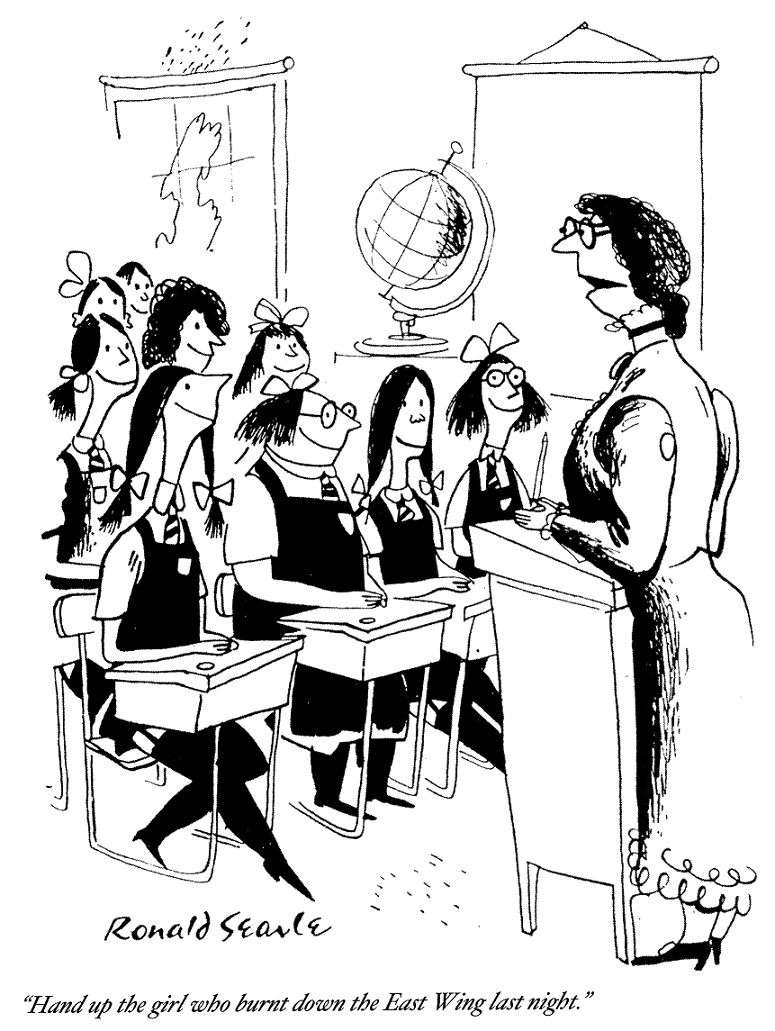 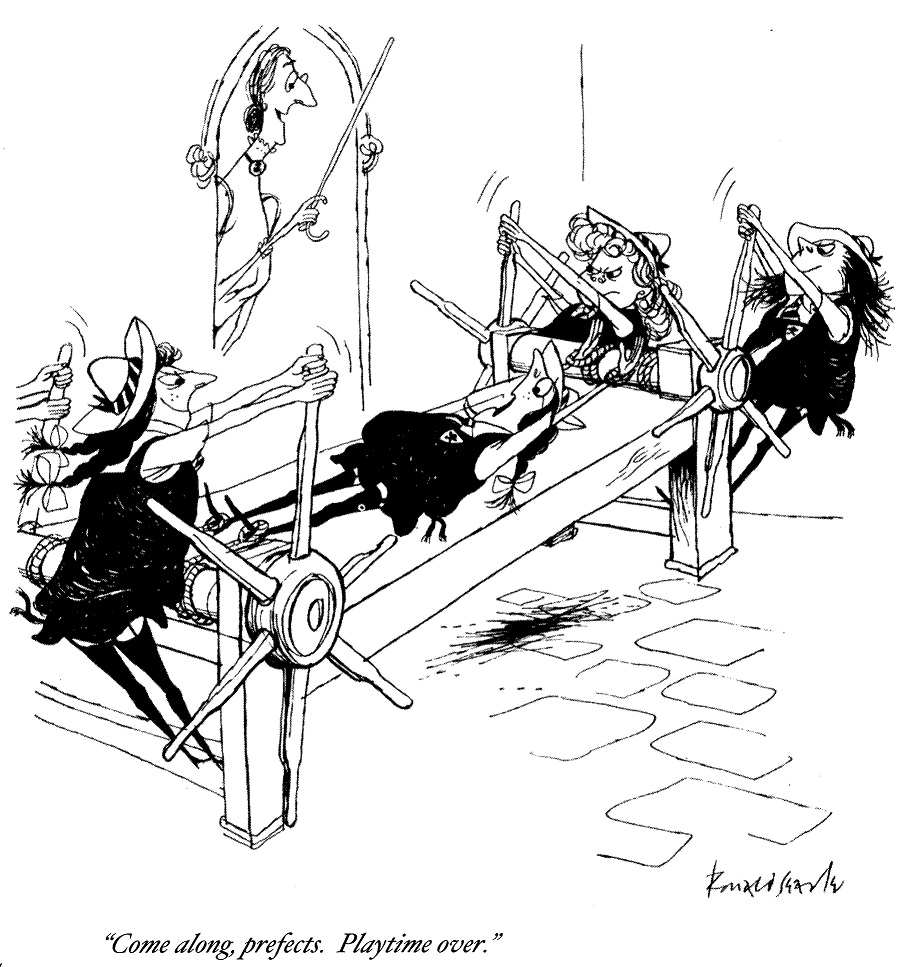 It is reasonable to expect that Searle’s experiences would have found a way to spill over into even his most light-hearted work. Webb, with whom Searle began an affair, stated that:

It hardly seems necessary to mention that Searle does not really think of schoolgirls as murderous little horrors. But unconsciously he was seeking to reduce horror into a comprehensible and somehow palatable form. 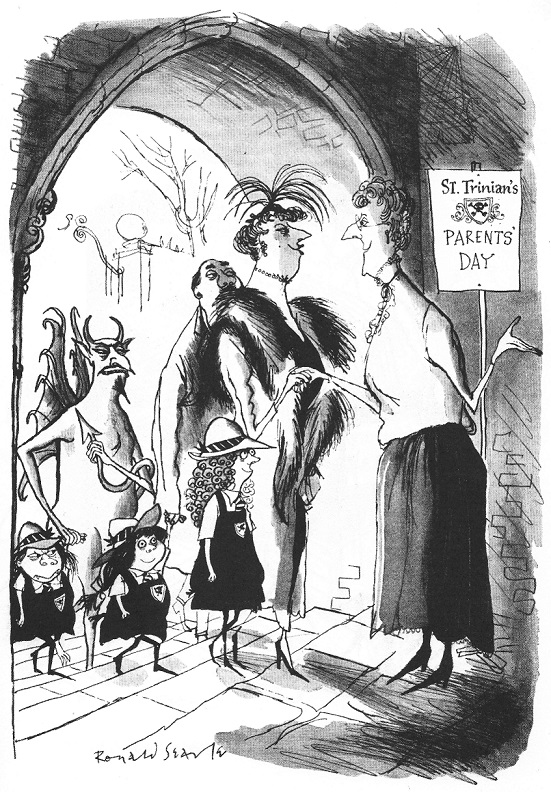 In 1947, Webb gave birth to a twin son and daughter at about the time the gin-swigging, cigar-smoking portrayal of the girls emerged. 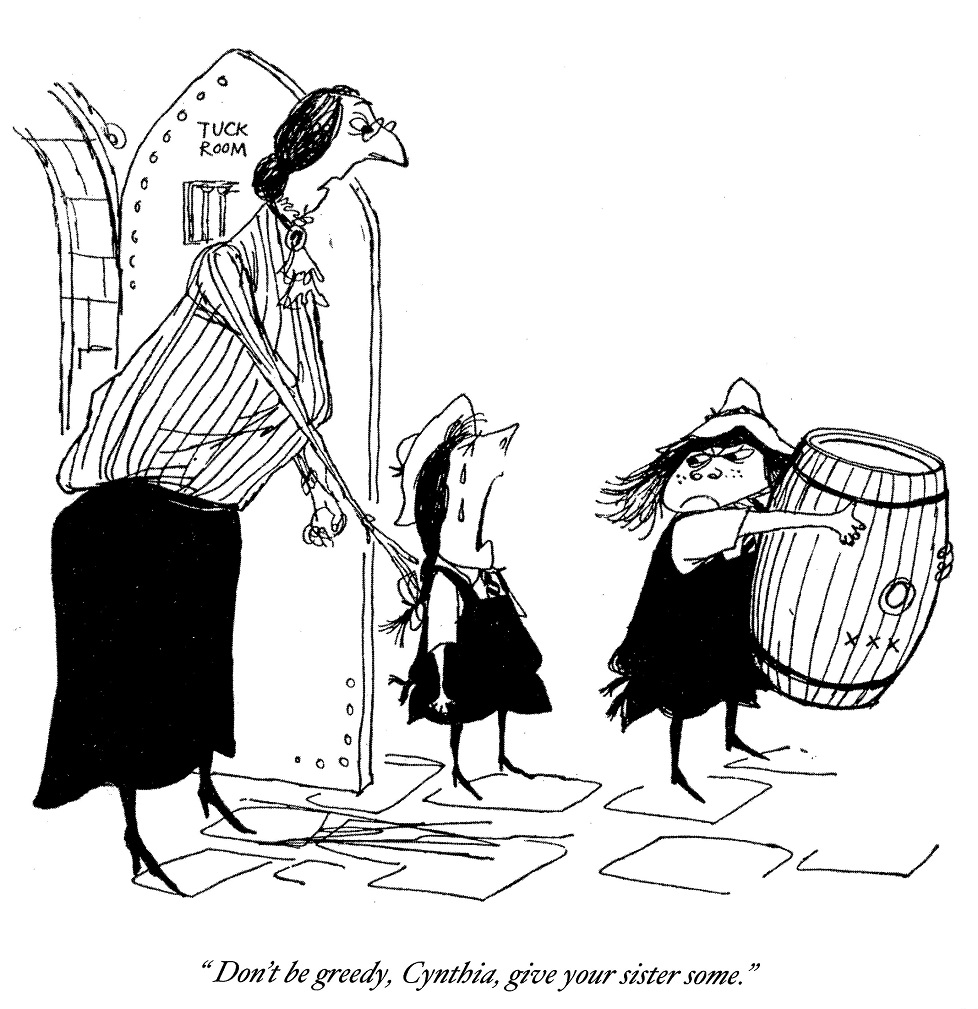 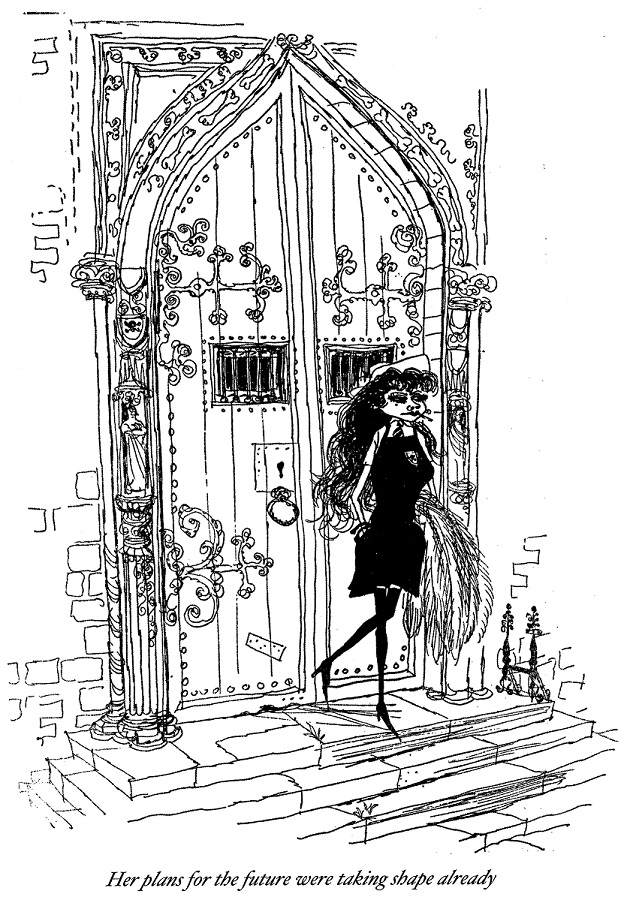 Hurrah for St Trinian’s! (1948) was introduced by D.B. Wyndham Lewis, who became the girls’ official chronicler when a writer was needed to accompany Searle’s cartoons. He later published a full-length novel with Searle, The Terror of St Trinian’s (1952), writing as Timothy Shy. Other books included The Female Approach (1950), Back to the Slaughterhouse (1952) and Souls in Torment (1953). Additional writers seized on the opportunity to bring St Trinian’s to life with more stories and songs. After the cartoons were reprinted in The Tribune, Art News and France Dimanche, the girls had become unstoppable and, despite his intentions, Searle’s cartoons remained in print into the 1990s. The first book to publish the complete drawings was finally compiled in 2007 as St Trinian’s: The Entire Appalling Business.

Searle’s biographer Russell Davies noted that though, at the time, scarcely more than a dozen St. Trinian’s drawings had yet appeared, the invention of new horrors for the girls to wreak was becoming a chore. By 1952 Searle decided that his life had been dominated by them for too long and stopped drawing them, killing the girls off in an atomic explosion the following year.

St. Trinian’s has gone. Encouraged by the success of recent atomic explosions in the Pacific, the school Nuclear Fission experts threw themselves into their experiments with renewed enthusiasm and with the help (thanks to certain old girls) of some newly acquired top secret information, achieved their objective at midnight last night. The remains of the school are still smouldering. By some miracle the statue of our patron saint, scorched but uncracked, still stands where once the ripple of girlish laughter could be heard on a clear frosty morning. The fate of the teaching staff is unknown, nay, will never be known, and a few young ladies are believed to have survived. Early morning reports from parts of the country bring news of blackened figures silently trotting through sleepy villages, but bloodhounds have failed to pick up a scent—however radioactive. This blow from which St. Trinian’s cannot recover (the building fund has been embezzled anyway) may bring a sigh of relief to many a parent and a quiet tear from true lovers of healthy girlhood. Let it suffice for us to say (before we draw a veil over the last broken limb) we are proud that the name of St. Trinian’s has echoed through the land. R.S. -From Souls in Torment, 1953 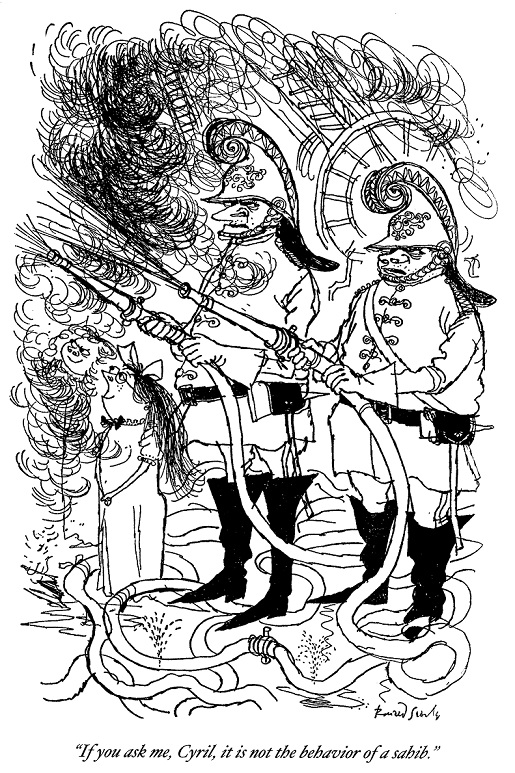 Searle may have been trying to please the British public and presumably the children’s book critics, but he was not happy to regard it as a key part of his life’s work.

The cartoons were both incredibly popular and highly ridiculed. The novelty of British schoolgirls breaking stereotypes may simply have been refreshing, but it may have also had therapeutic value for a populace recovering from the horrors of war. For women and girls, it likely had a liberating effect—giving them a way of voicing a seething resentment at the confinement of polite British society and hope in being accepted as they are, warts and all. The ridicule was a predictable backlash against women’s independence and the latent fear of lesbianism. Despite these attacks, St. Trinian’s became a household name and the basis for countless inside jokes.

It was probably Arthur Marshall—another St. Trinian‘s author—who gave the school’s headmistress, Ms. Fritton, her persona in the film comedies that followed. As is often the case, the first film was the best and it was no small task for the screenwriters—Frank Launder, Sydney Gilliat and Val Valentine—to patch a series of comedic beats together into one coherent story. 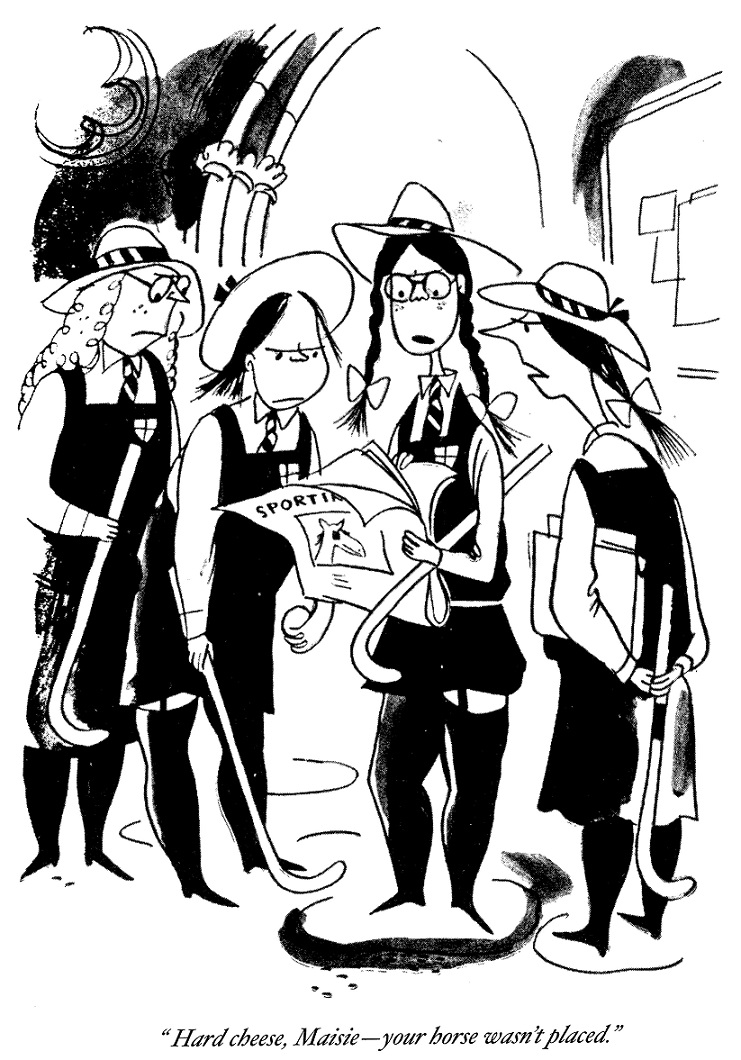 The main plot is about the goings on surrounding a horse race. Ms. Fritton’s brother—both brother and sister were played by Alastair Sim—has a contender named Blue Prince and is coercing his sister to allow his daughter, Arabella (Vivienne Martin), to reenroll in the school after having been expelled for arson. That in itself would have been a small matter except for the fact the the building in question was not insured. Here we meet Bella and one can see she is holding a cigarette at the bottom of frame. 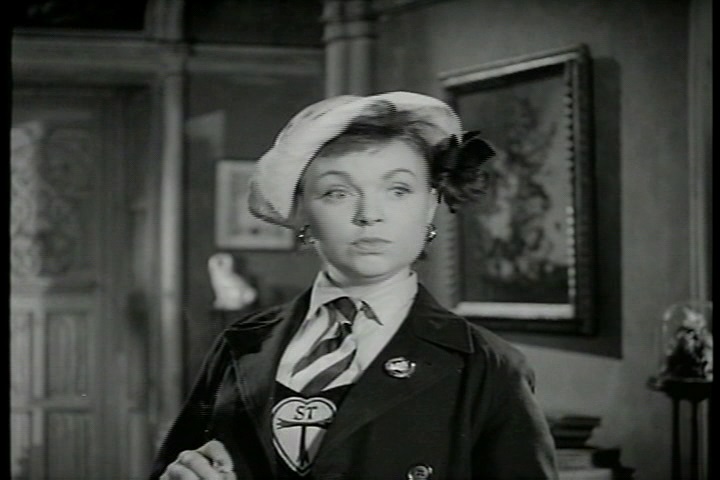 The reason for her return is to help her father spy on another contender, a horse owned by a sultan called Arab Boy. This is his daughter Fatima’s (Lorna Henderson) first year at St. Trinian’s and will presumably be the source of the intelligence. 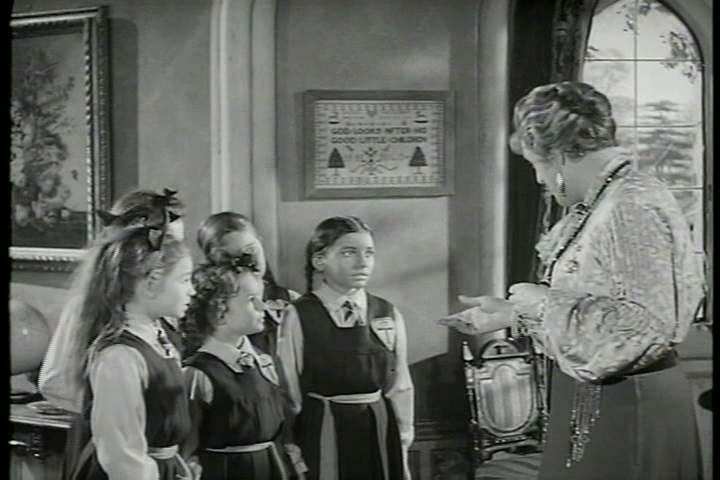 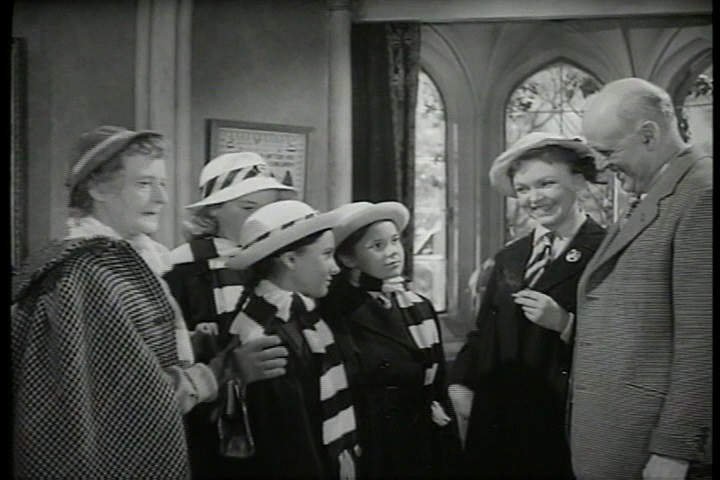 When the girls of the Fourth Form learn how fast Arab Boy is, they hope to make some money by placing a bet on him before word gets out. At one point, due to Bella’s interference, they have to hide the horse in their dorm room. Ms. Fritton gets wind of this situation and also sees it as an opportunity to finally get some funds for the school and perhaps finally pay off her staff. The situation has the Fourth Form and Sixth Form girls plotting against each other and one can’t help rooting for the younger girls who finally prevail. 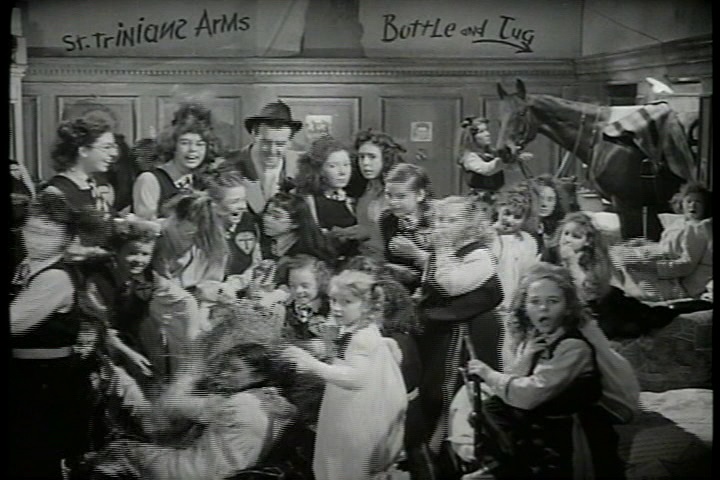 One girl in particular has learned to survive by keeping her ear to the ground, and she is periodically squeezed for information by the other girls. 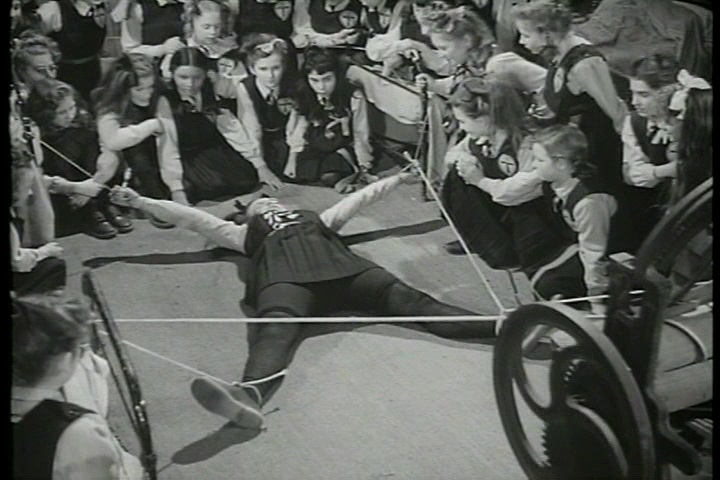 Even in the beginning of the film, it is established that the girls terrify the local constabulary which, along with the Ministry of Education, is conspiring to shut the school down. 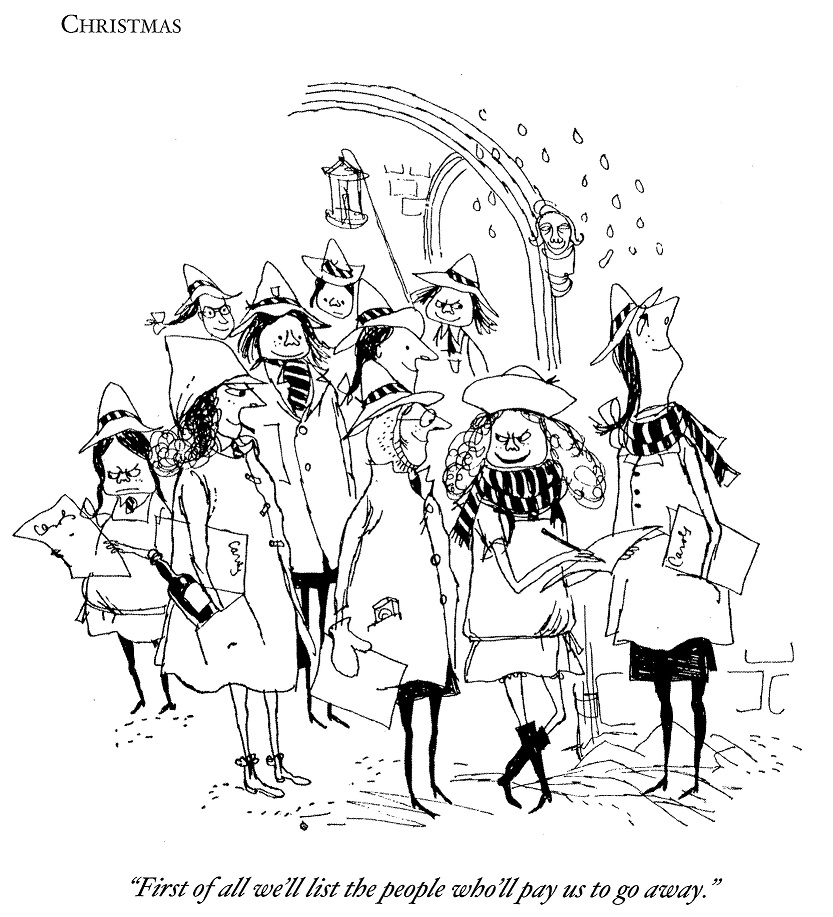 A female detective infiltrates the school posing as a gym teacher in order to gather evidence. A tour of the school exposes her to the many terrors of the school and what the girls get up to. In chemistry class, Ms. Fritton advises the girls to be cautious when working with nitroglycerine and we also learn they are producing bootleg gin which a shady character named Flash Harry helps them sell. 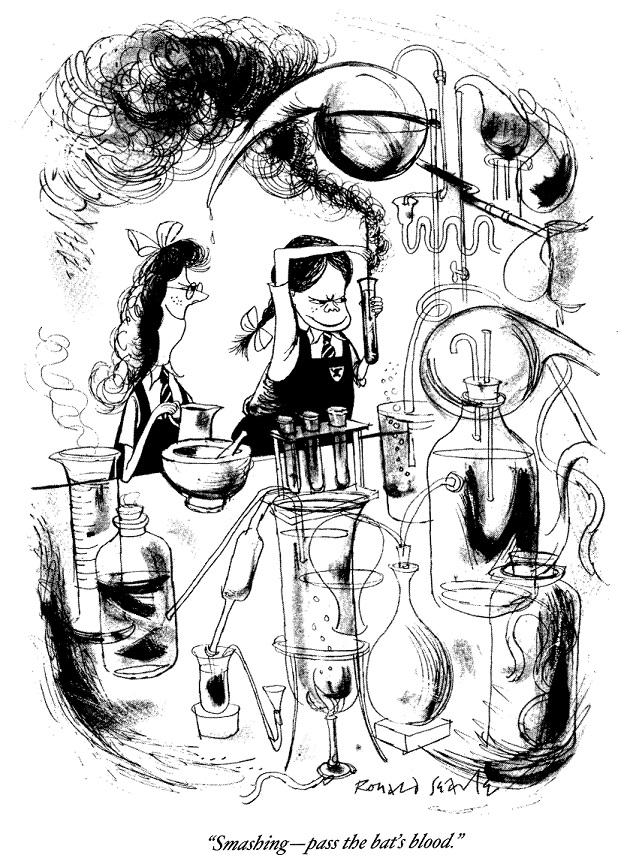 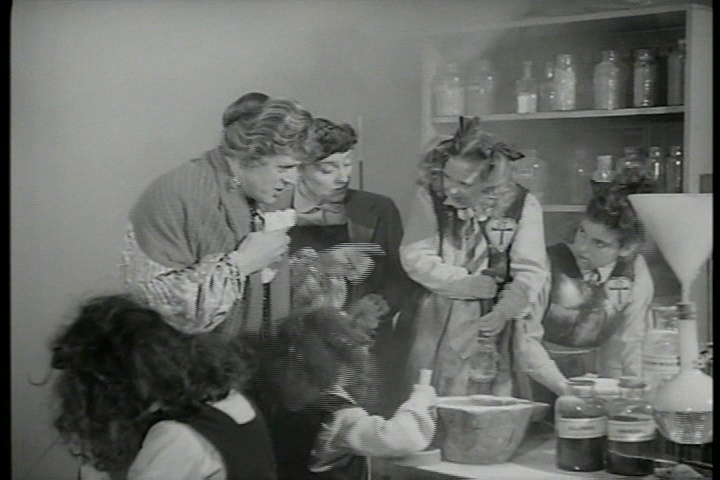 The detective is dismayed to learn of the girls’ lack of discipline and tactics in field hockey matches. They do not win by skill, but by literally putting their opponents—and any meddling referees—out of commission well before the second half! There is always a stack of stretchers on hand at these games. 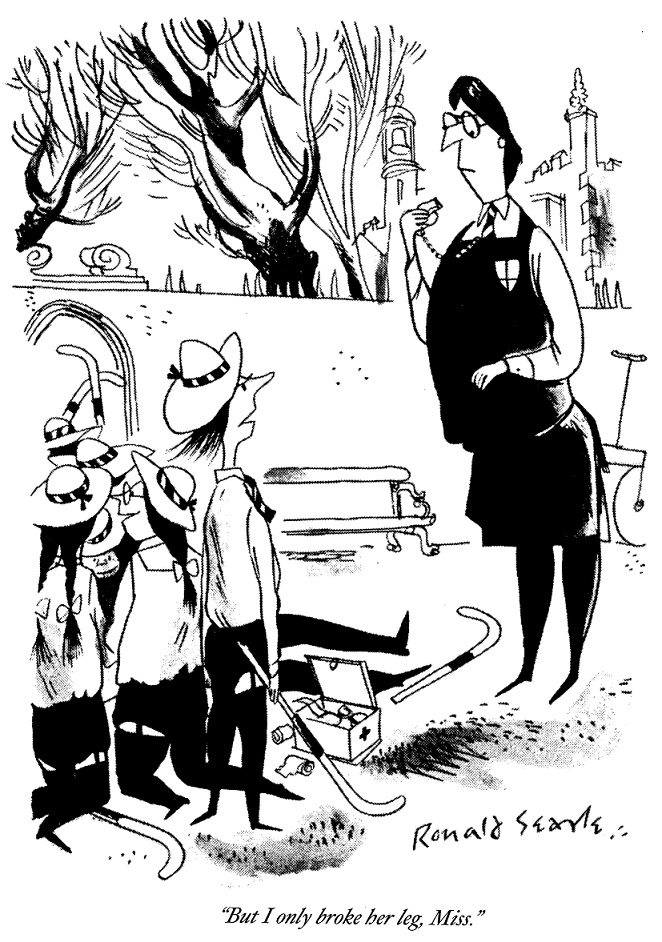 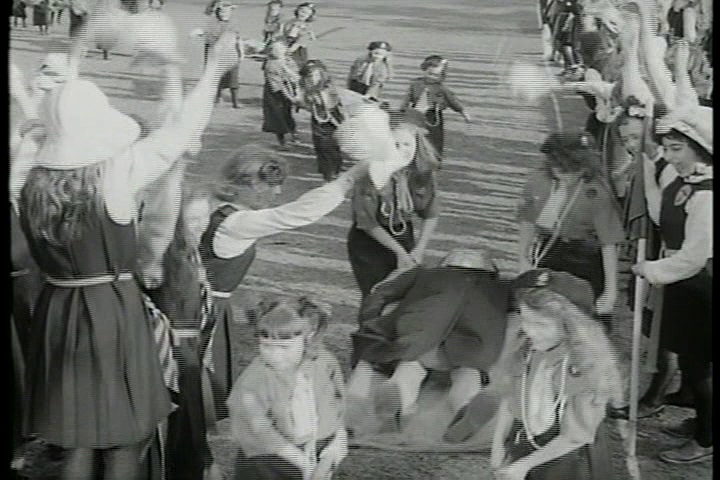 The girls of the Fourth Form have saved the day and for the first time since 1927, the school is able to give an award for good conduct, which the girls immediately spoil. 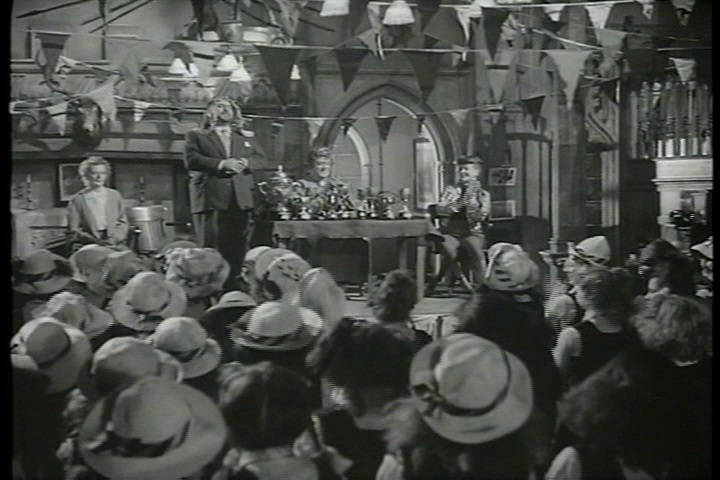 There were several sequels, but there was no consistent feel to the films given how far apart they were produced. In Blue Murder at St. Trinian’s (1957), the girls contrive to cheat on a national competition to justify traveling abroad to meet a rich and eligible bachelor. In The Pure Hell of St. Trinian’s (1960), the girls are subjected to a scheme to be inducted into a sheik’s harem. In The Great St. Trinian’s Train Robbery (1966), the girls are relocated after burning down their school and discover that robbers have stashed their booty there. In The Wildcats of St. Trinian’s (1980), the girls decide for some reason to go on strike and get other schools to join them. And then there has been a recent spate of remakes: St. Trinian’s (2007) and St. Trinian’s 2: The Legend of Fritton’s Gold (2009) which take advantage of the public’s new familiarity with British boarding school life since the Harry Potter films. 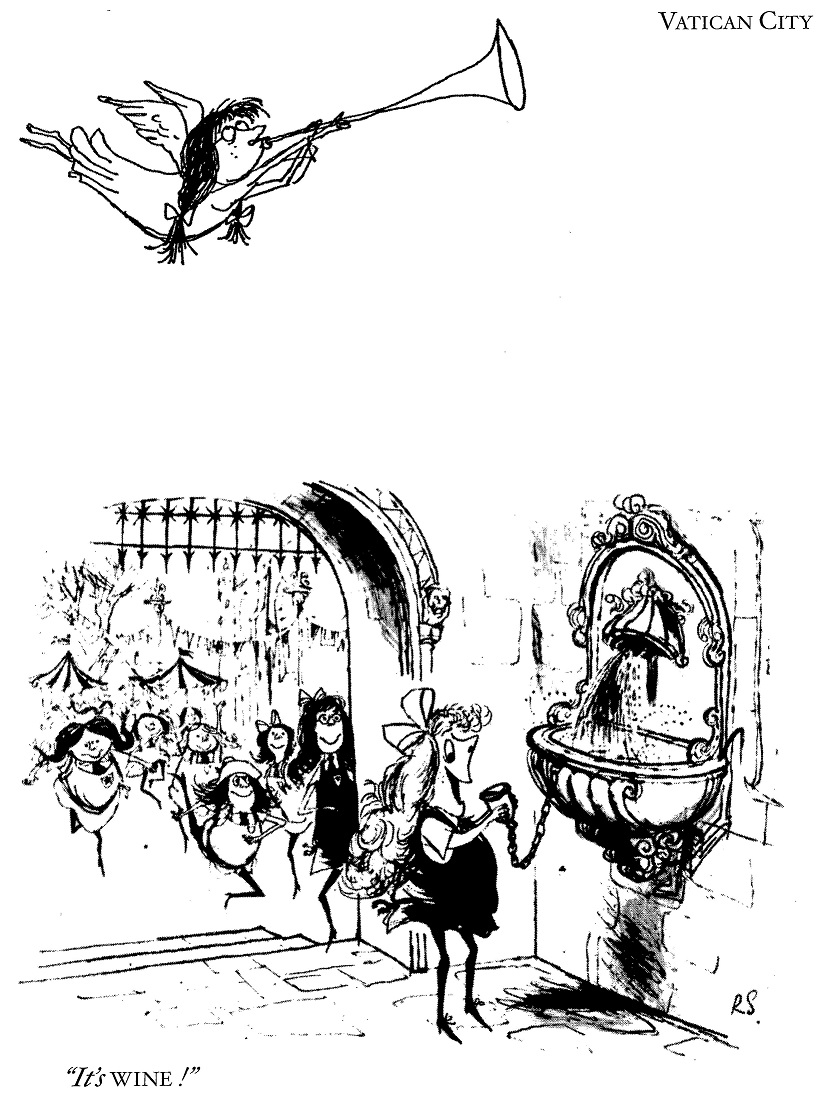 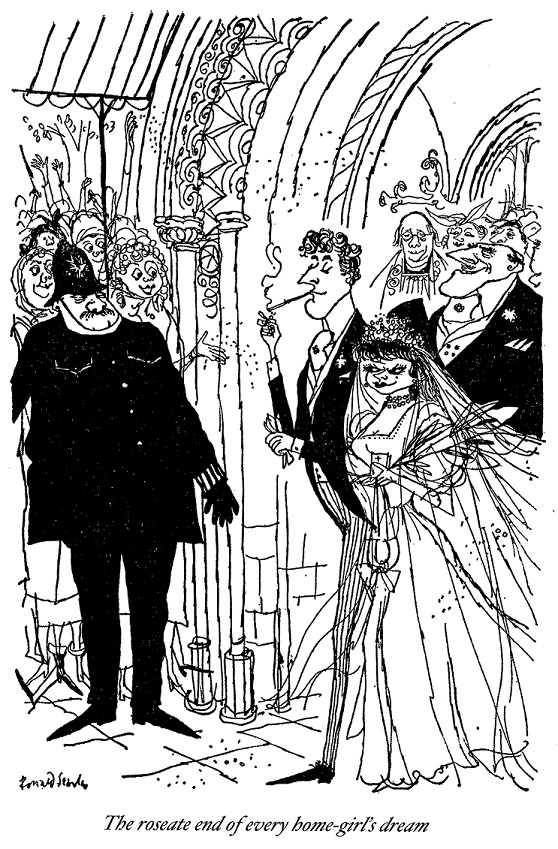 Although St. Trinian’s is a fictional school, various aspects of it were inspired by different schools. It was reputedly based on two independent girls’ schools in Cambridge—Perse School for Girls and St Mary’s School. Searle, growing up in Cambridge, saw the girls on their way to and from school on a regular basis. In fact, in the Perse School for Girls’ Archive area there are several original St. Trinian’s books, given to the school by Searle himself. The gymslip style of dress worn by the girls closely resemble the uniform of the school that Searle’s daughter Kate attended.

I found an interesting site that chronicles the history of girls’ schools, both real and fictional, and you can read more here.