While perusing images of Black girls one can find charming examples, just as one finds of girls of any race. However, since modern Black girls are descended from races that have been subjected to heavy oppression by Europeans and are still victims of cruel and unwarranted stereotypes, particularly in the United States, there are portrayals of these girls that would make any decent human being cringe. It has been a challenge finding just the right context with which to present these images.

There is a recent exhibit held by Art In These Times that deals with these images specifically and posits how they were part of a propaganda campaign to put Black people in their place after the abolition of slavery in the United States. The exhibition is called ‘Making Niggers: Demonizing and Distorting Blackness’ and will run through January 2016 in Chicago. It is based mostly on postcards from co-curator Mariame Kaba’s private collection.

From the 1890’s through the 1950’s, thousands of postcards depicting racist caricatures and stereotypes of Black people were produced across the United States and the world. Degrading images of blackness also found expression in advertising and other media. Black people were portrayed as lazy, child-like, unintelligent, ugly, chicken stealing, watermelon eating, promiscuous, crap-shooting, savage and criminal. These images comforted white people in their racist beliefs, reinforced white supremacy and enabled whites to justify violence and subjugation of Black people. The stereotypes continue to shape and shorten Black lives in the present. -From Making Niggers Exhibition Webpage, 2015

Without knowing which specific postcards are on display—there are thousands of possibilities—we present a few selections that illustrate this stereotyping through the portrayal of little Black girls. One of the first things one notices is how many of these racist images are of children. That was part of a subtle tactic to regard Black people generally as juvenile and so really these are not especially about children. 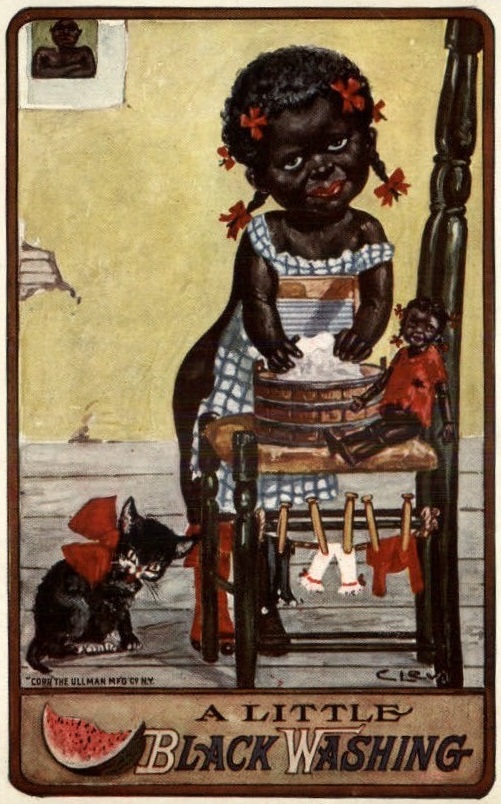 That watermelon symbol at the bottom was certainly unwarranted. It’s interesting how something that may have once been a symbol of Black independence has been turned into a racial insult. 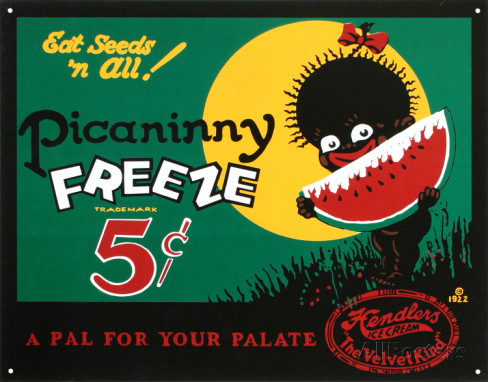 There are a handful of stereotypical “types” of Black people and it is amazing that whole products and companies openly used these names. Pickaninny was a term commonly used to refer to a dark-skinned child and some cards would make this into a play on words like, “I’m not pickin-any body but you.” which appears on a vintage Valentine.

A lot of images show Blacks naked. This seems to play into several stereotypes so that they can just be dismissed as primitive savages. 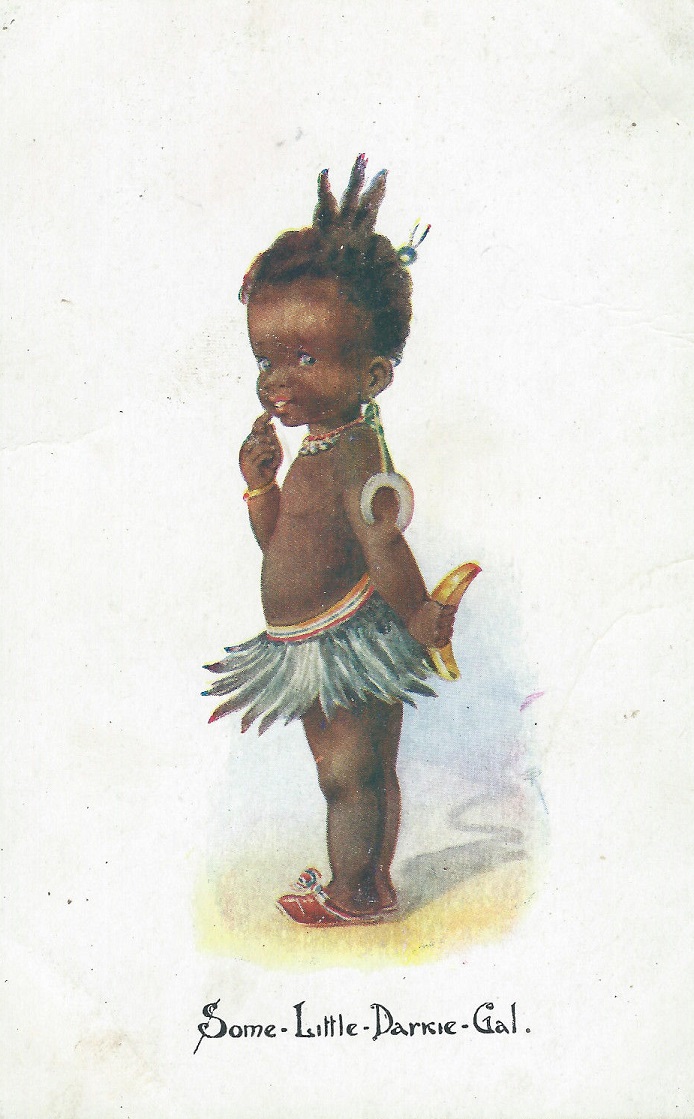 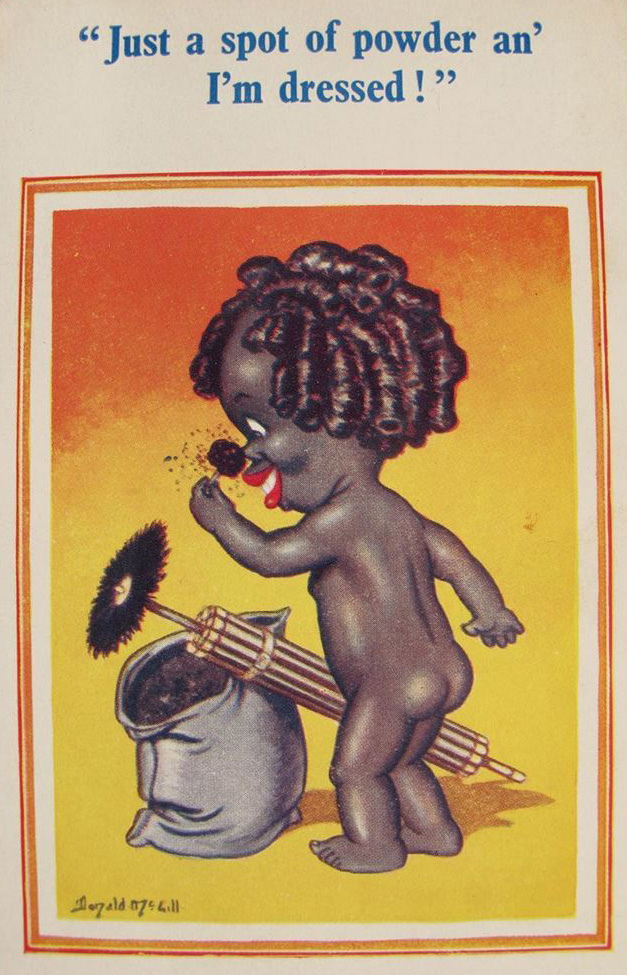 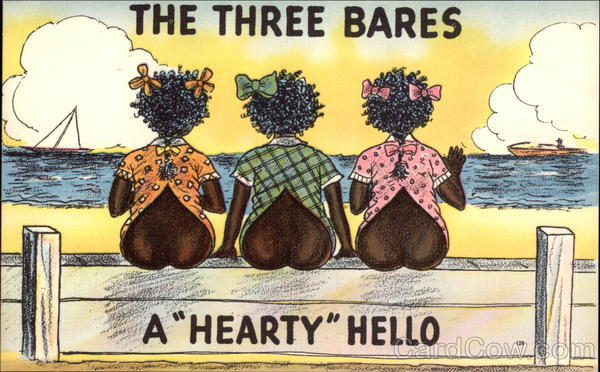 It is interesting to note there are both Black and white versions of this image. 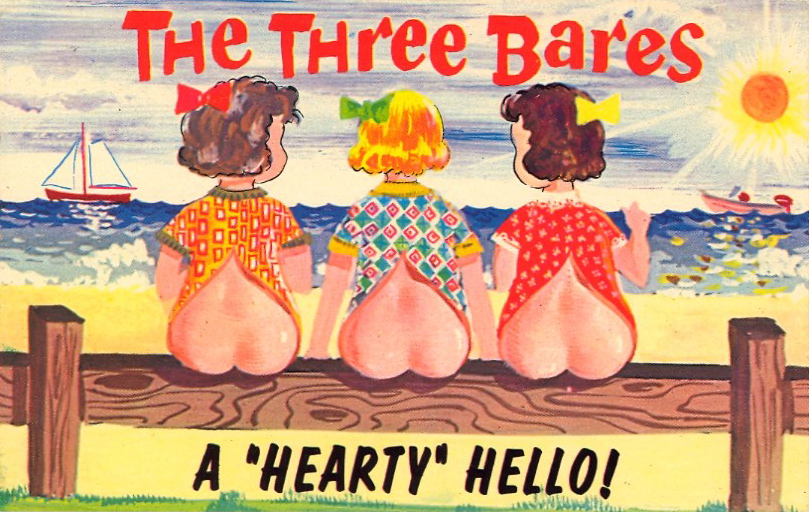 But really, it is an opportunity to subject them to humiliation in the name of humor. 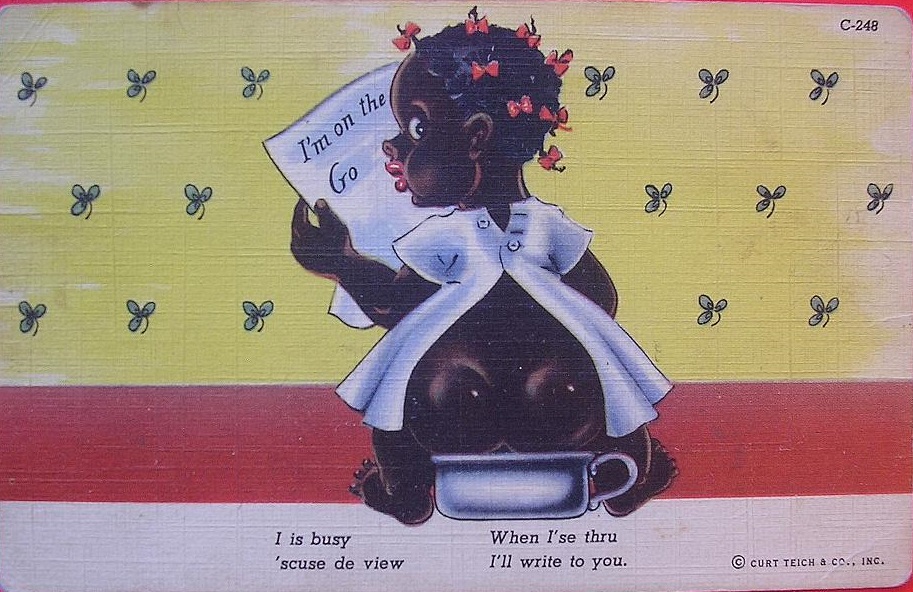 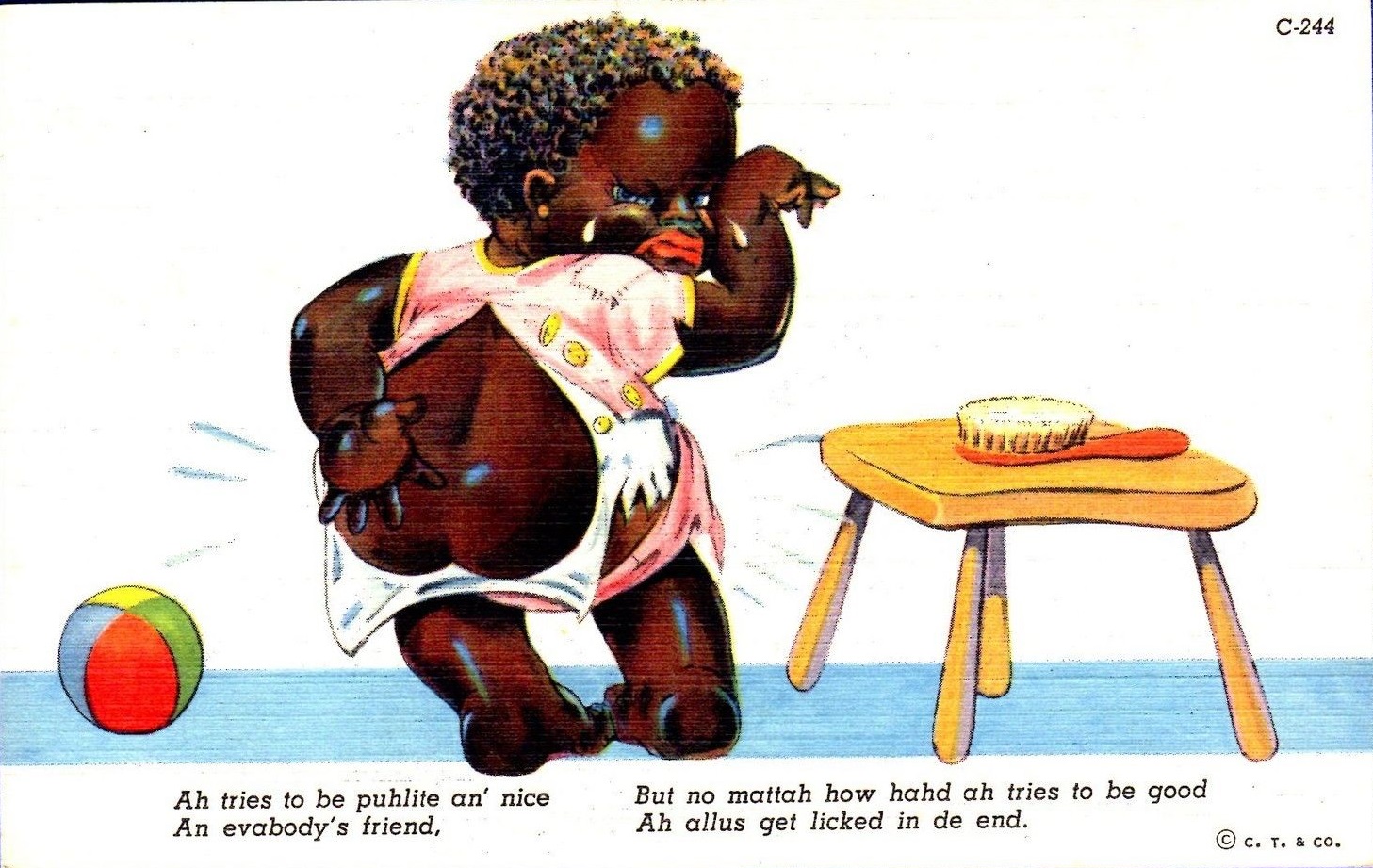 Nudity is also an occasion to engage in sexual innuendo. This reminds white people of the ongoing sexual threat and justifies any sexual mistreatment of Blacks. 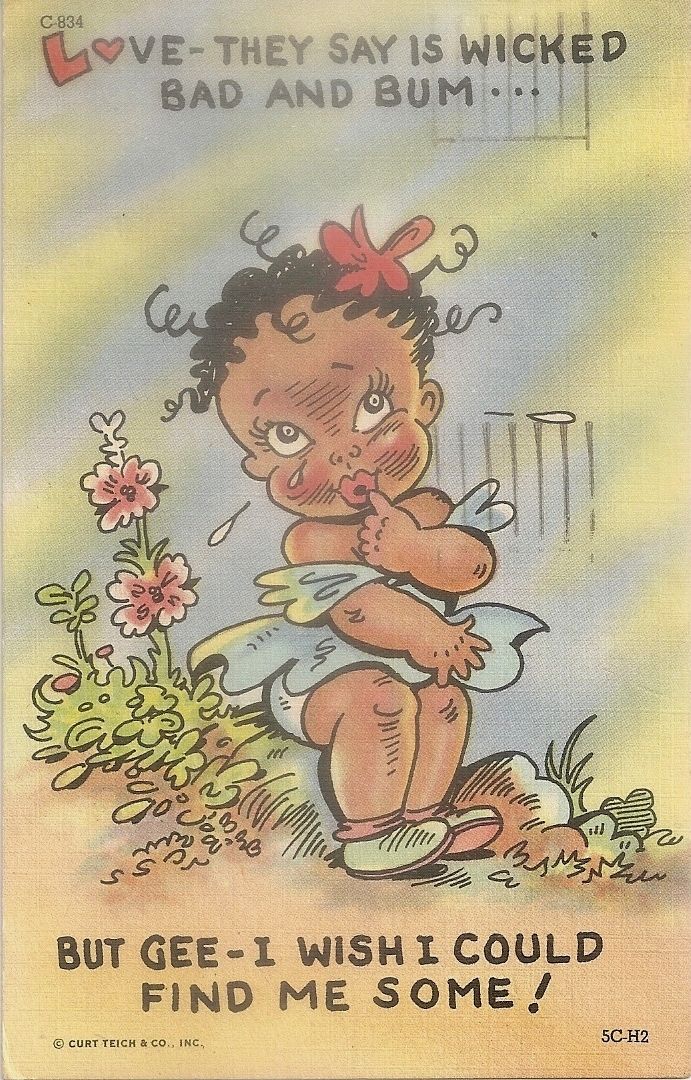 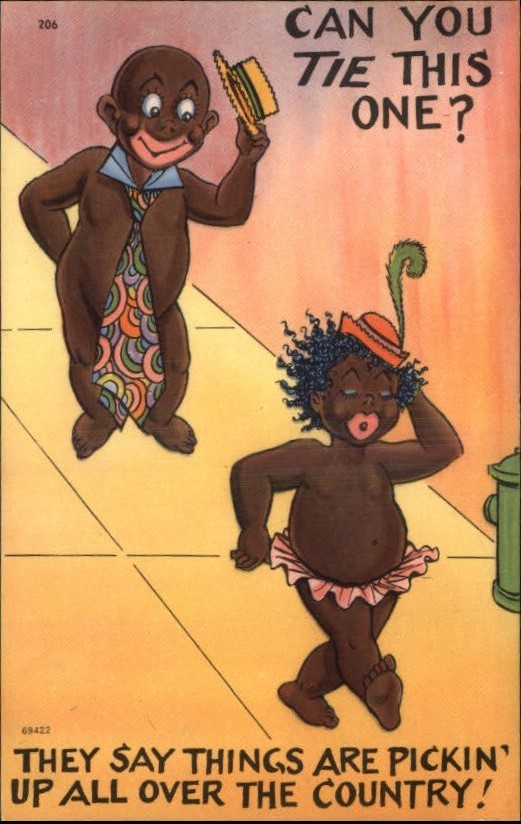 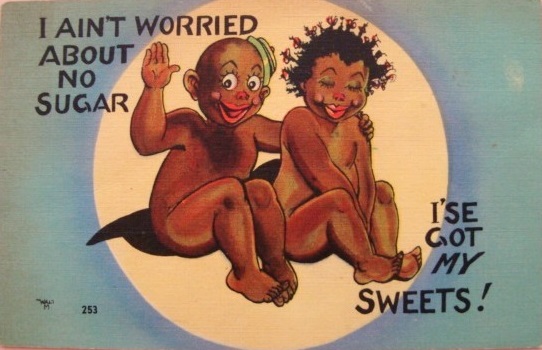 Plenty of images have fanned the flames of white fear of Black sexual promiscuity and potency. And woe has come to many Black men who showed a sexual interest, or seemed to, in a white woman. This was part of the impetus for the formation of the Ku Klux Klan. 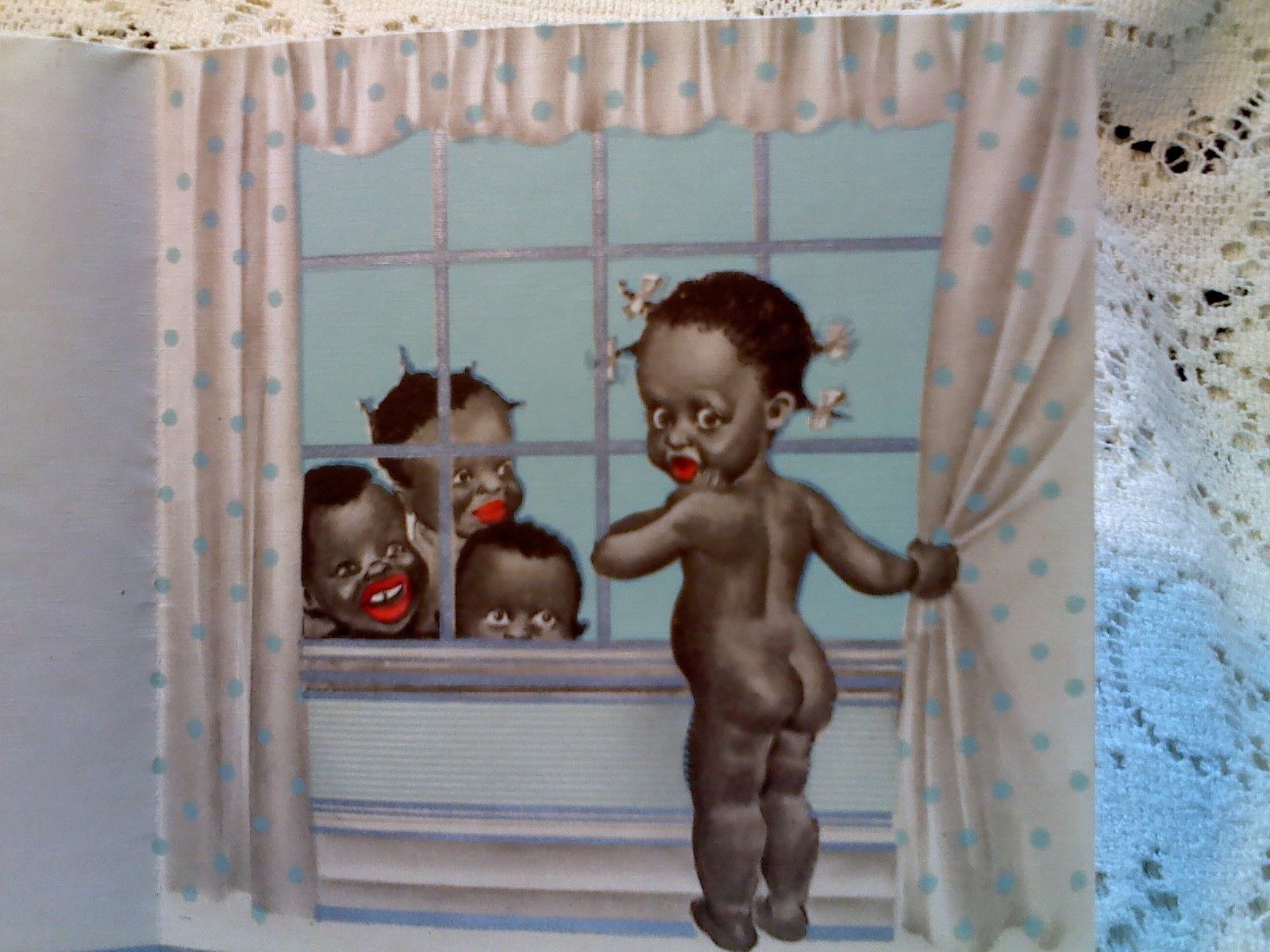 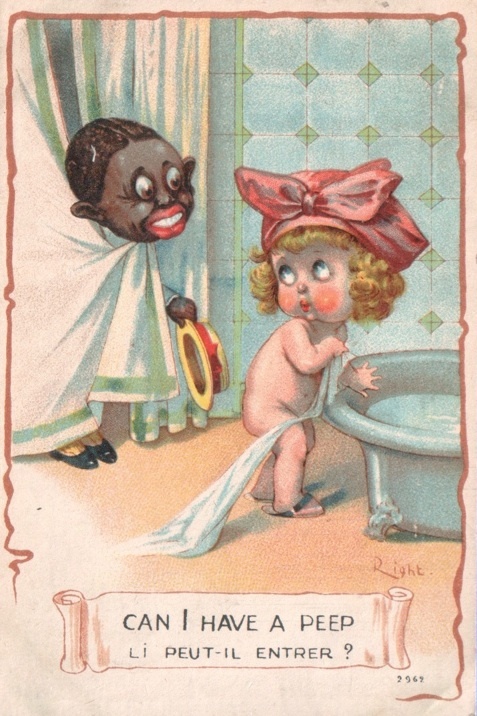 Even when decently dressed, they are drawn in a way to appear as though they are not wearing underwear and it is easier to get away with this when they are drawn as children. The exaggerated red lips are also a typical stereotypical feature and emphasizes their animalistic qualities. 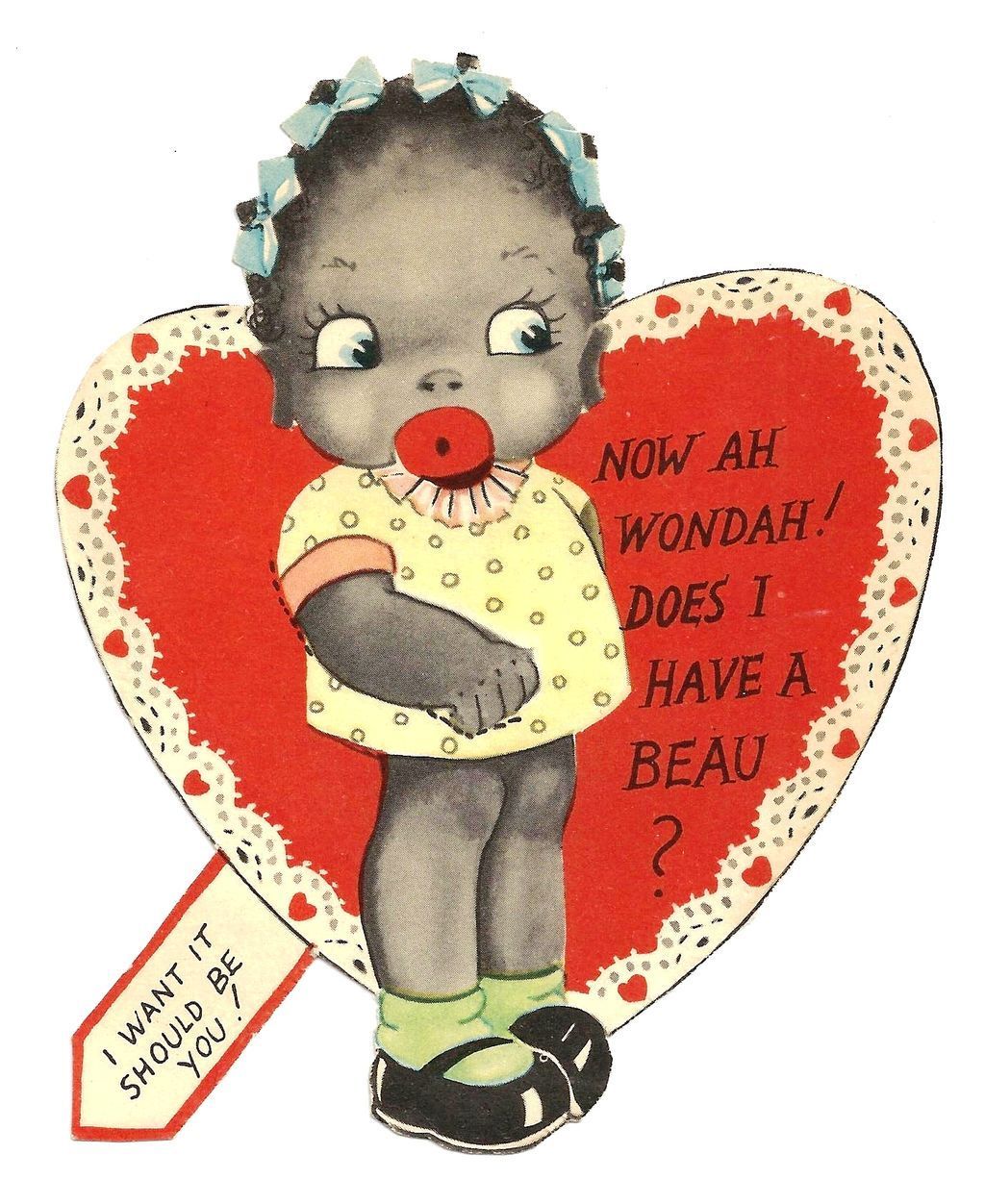 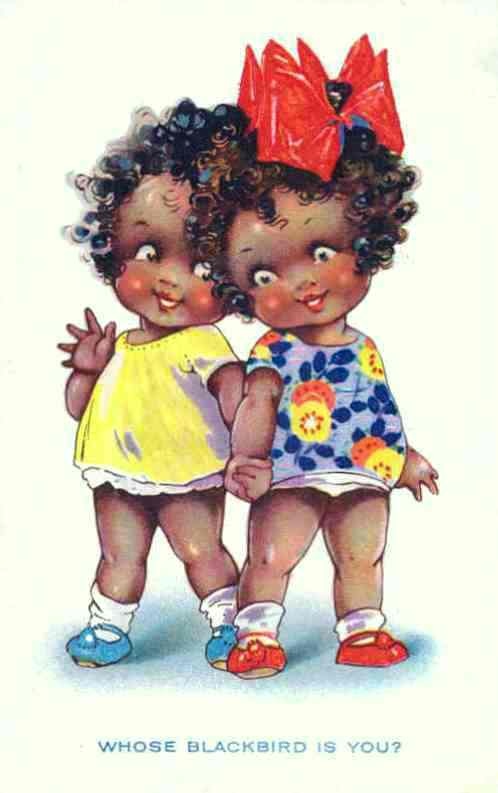 Agnes Richardson – Whose Blackbird Is You? (1920s)

For a time, elementary school reading levels were named after birds with bluebirds at the top and, you guessed it, blackbirds at the bottom. Many examples above make light of Black people’s unsophisticated use of English and, by doing so, helped perpetuate it.

7 thoughts on “Makes One Cringe”