Several years ago I visited a medieval fair. It was a modern American version of medieval Europe, censored to conform with modern American concepts of decorum. Therefore, I was surprised to see a booth selling what at first glance appeared to be figurines of nude girls. Then I saw they were not really figures of human girls; each had a tiny pair of gauzy wings. They were actually intended to represent nude fairies. Was it really necessary to put wings on the nude girls and call them fairies?

In my opinion, it was. I would not have been offended by figurines of human girls, but I would have been intimidated about entering their booth and perusing their wares if the figures were displayed as human girls, because I thought others would think it was improper. I had the strange feeling that the other people there felt the same. I felt that nobody who browsed through the booth was offended by nudity, but feared others would look down on them if the figurines represented girls instead of fairies.

I did not get one of the figurines, but I have found other fairy figurines, including this one, at the Mollamari web page. 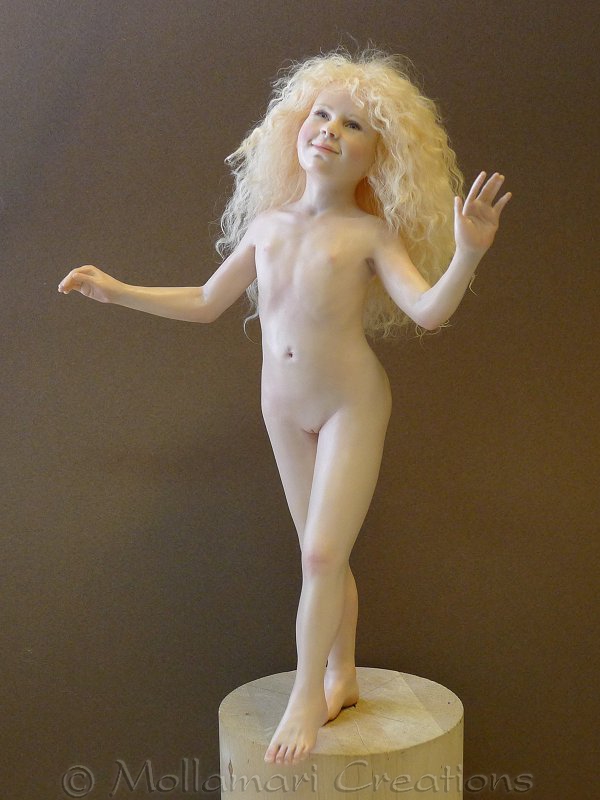 Note the attention to detail on this figure. It looks like a realistic figure of a girl, and it may not be immediately apparent why it is a fairy. You can see how the figure was made here, and you will see that the ears—not visible on the completed figure because they are covered by hair—are pointed. If the feature that makes the figure a fairy instead of a girl is not easily seen, is it still better to make it a fairy? In my opinion the answer is yes, but I cannot explain why. This is not logical, but nothing about fairies is logical.

Fairies, elves, and leprechauns are known to occultists as “elementals”, spiritual creatures that are neither human souls nor angels. Some UFO researchers believe that flying saucers are fairies that manifest themselves in an updated form, but still play the same irrational, centuries-old pranks. Although some fairies were thought to be of diminutive size as far back as Gervase of Tilbury (1211), most fairies prior to the 17th century were thought to look much like humans. The de Lusignan family of France, in fact, claims descent from a fairy, Mélusine, who for six days of the week looked exactly like a human. According to Richard A. Schindler, Associate Professor of Art Allegheny College, fairies in art became very popular in the mid-nineteenth century, in part as a contrivance to permit nudity that was becoming unacceptable in paintings of humans. This view is shared by Terri Windling, artist, author, and founder of Endicott Studios, and also by Christopher Wood of the Antique Collectors Club.

It is my personal observation that most of the fairy paintings from the 1860s or earlier portray fairies as adults. Later artists are more likely to paint fairies as juveniles.

Luis Ricardo Falero (1851–1896), was a painter who specialized in fantasy subjects. Most of his paintings are of women over the age limit for Pigtails, but the butterfly girl in this painting appears to be adolescent. Although the fairy is nude, fairy art by this time was not merely a contrivance for nudity. The atmosphere of fantasy and magic is to me the main attraction of this painting. The girl, the butterfly wings, and the flowers, considered separately, are realistic. When these elements are combined in the painting, we go from realism to pure fantasy. 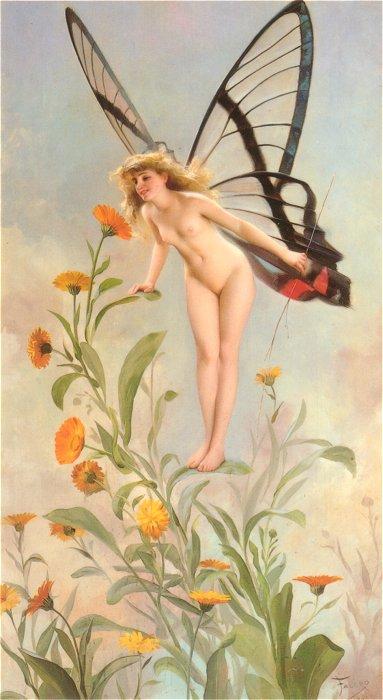 Margaret Winifred Tarrant (1888–1959) illustrated fairies for children’s books in the early 20th century. Fairy art was still very popular, but was considered especially appropriate for children. I like the facial expressions on the fairies in this painting of a formal procession. 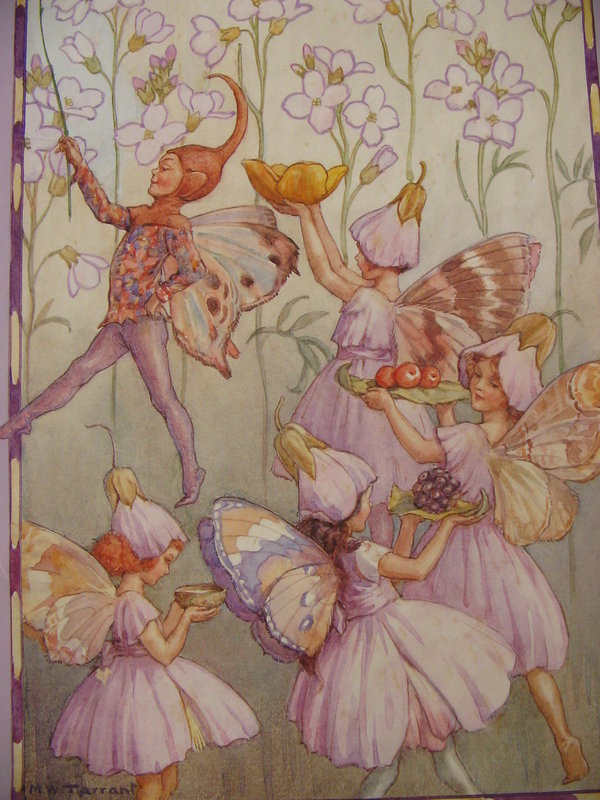 Cicely Mary Barker (1895–1973) was another popular illustrator of children’s books. The following are from her series of Fairy Flowers of the Spring. 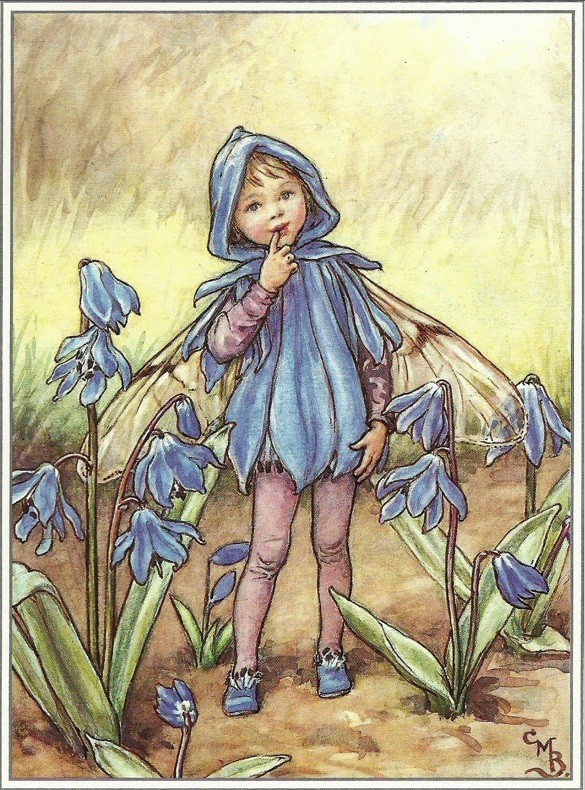 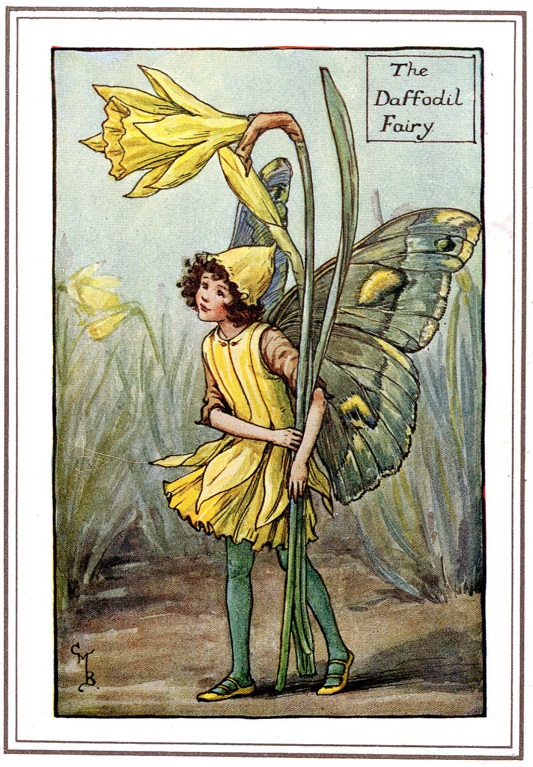 Ida Outhwaite (1888–1960) is the third of the early 20th century illustrators I will include in this post. I did not realize until after I started to gather information that there were so many very good artists who specialized in fairies. These two illustrations are typical of her work. 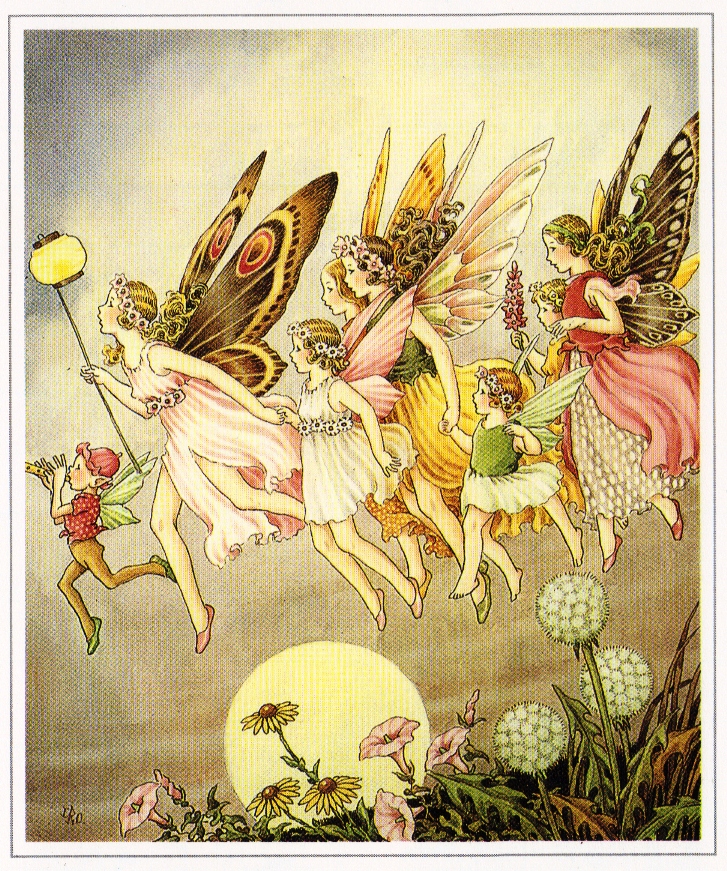 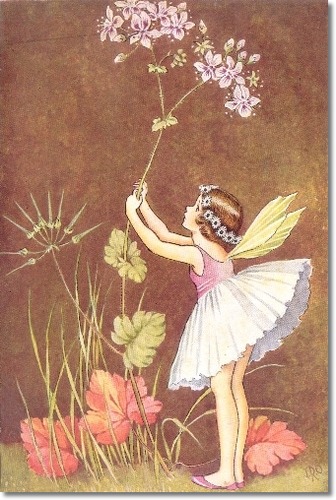 Brian Froud (born 1947) is one of the most famous contemporary British fairy artists. His fairies appear to be rustic and mischievous. I like the natural feeling of his paintings. Here are two samples. 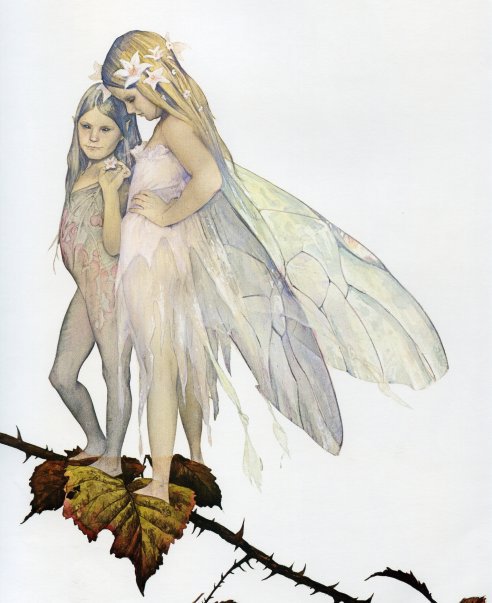 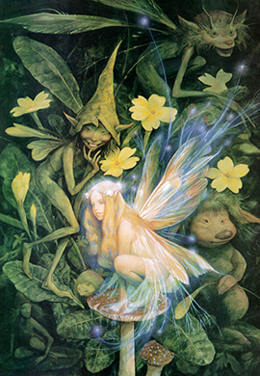 Erlé Ferronnière (born 1971) is a French artist. His favorite themes are mythology and legend. I think his work is great. It is hard for me to explain why; there is just something magical and otherworldly about his art. The first example of his is this cute butterfly girl. 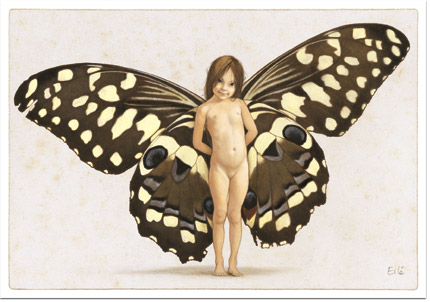 The next is my favorite Ferronnière. Most of the fairies are the wrong age and sex for Pigtails in Paint, but there is a butterfly girl in the lead and a dragonfly girl overhead. Are the fairies kidnapping a human baby? If they are, the baby does not seem to mind. The more I view this painting, the more it draws me into the strange world of fairy. 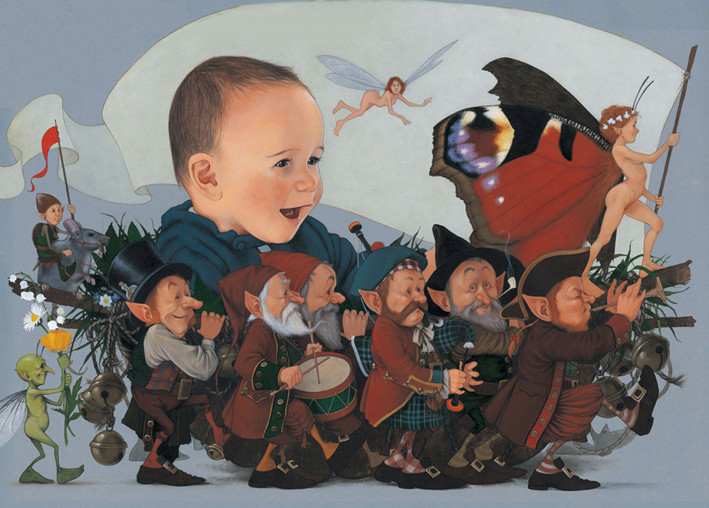 The last artist I want to include is a Japanese artist who uses the name Syuceui. His work is posted on pixiv. You must register on pixiv to view any drawings that feature nudity, but registration is free. Syuceui has realistically drawn girls, but with surrealistic elements such as wings and floating in air. I have included three of his works. All are simply titled Fairy. The last is my favorite. I like the expression on the fairy’s face; it appears she enjoys posing for her portrait. I would like the drawing if it were of a human girl too. If you look at it logically, it essentially is a drawing of a girl. The only things that indicate she is not human are a pair of wings behind her and a frog and mushroom which, if drawn to scale, indicate her size. That is enough to remove her from our world, and put her in the magic and illogical realm of fairy. 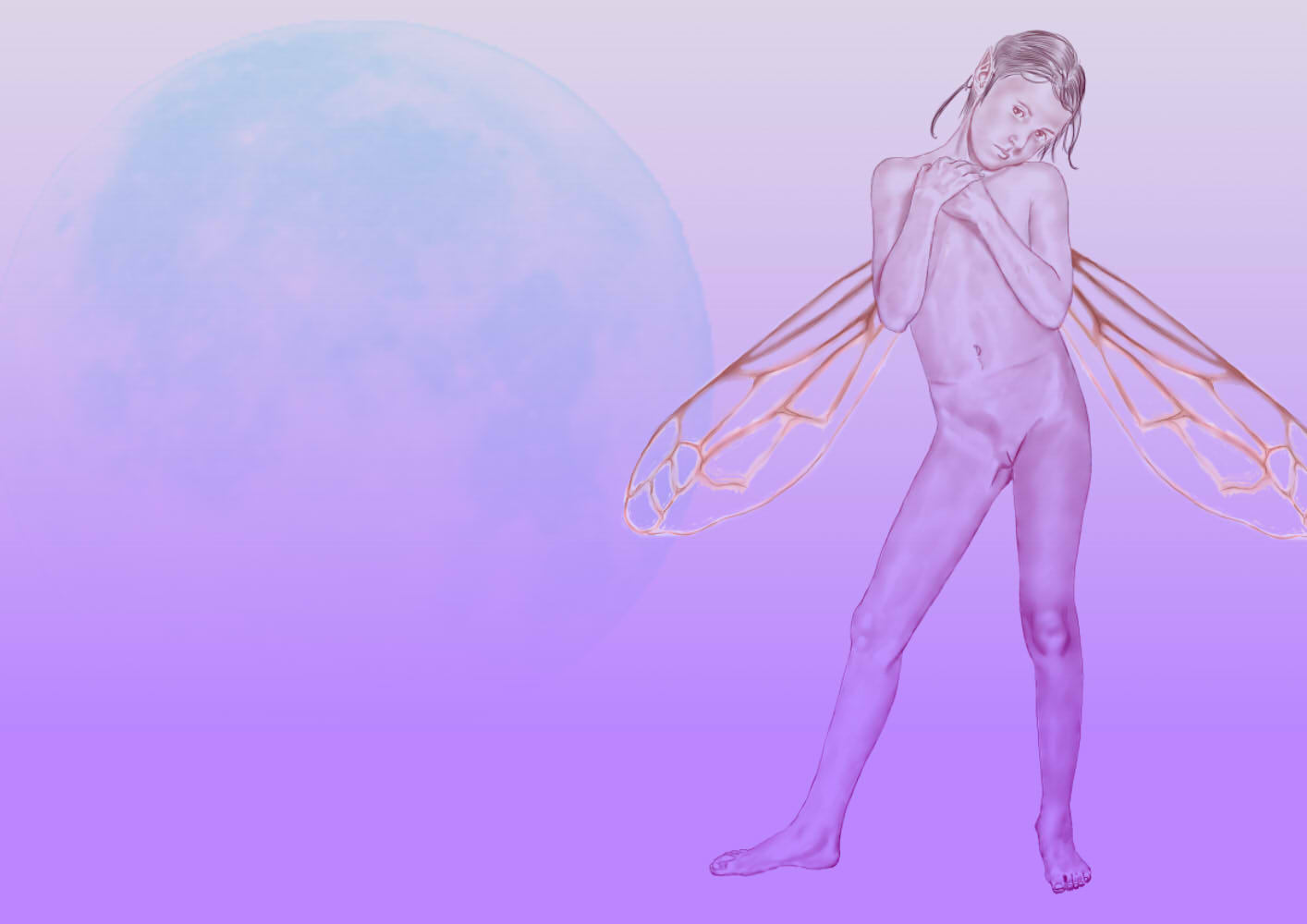 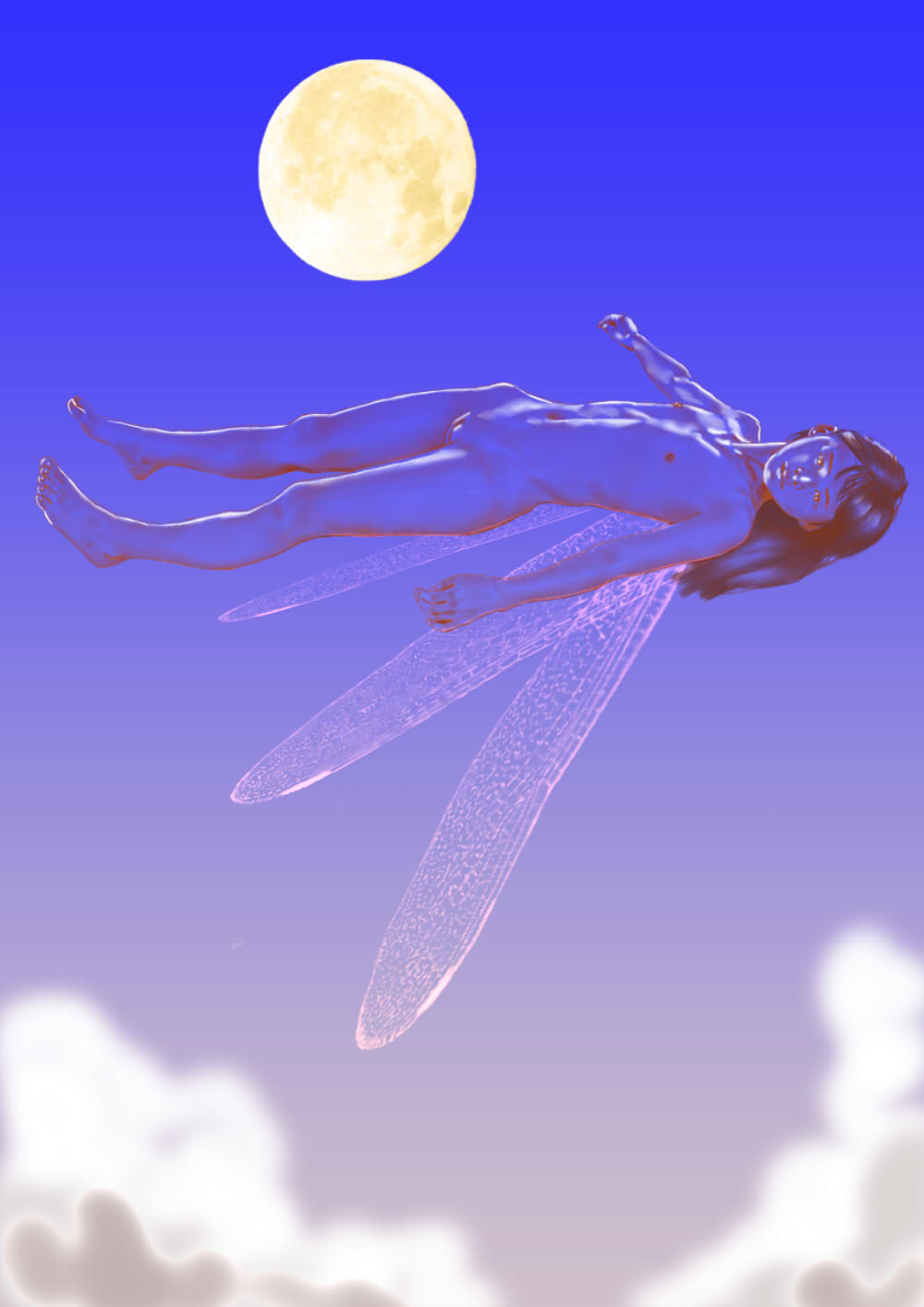 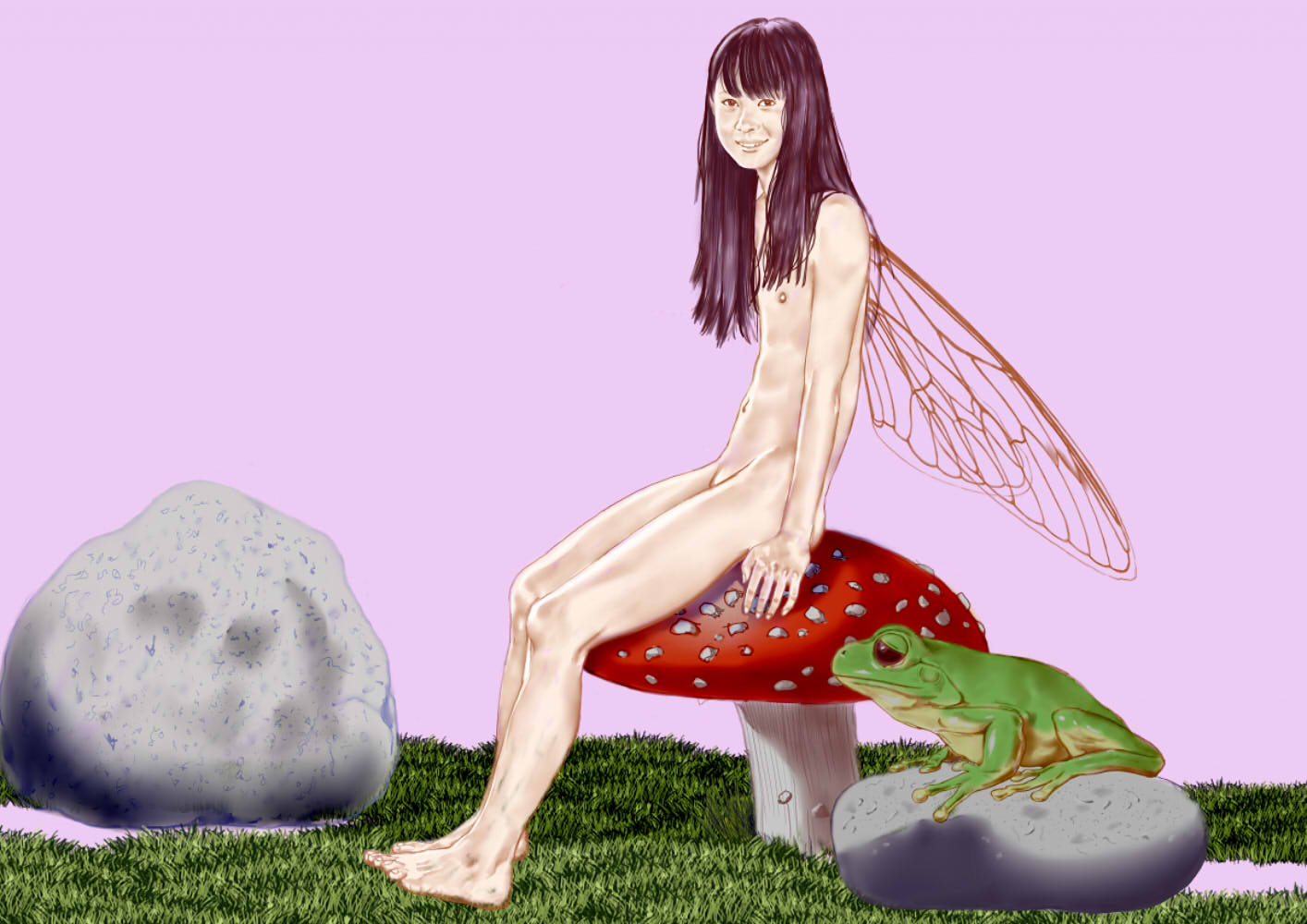 2 thoughts on “Girls as Fairies”