There is so much more that I have to learn, and then maybe I’ll become someone… –Paula Modershon-Becker in a letter to her husband, Otto Modersohn, 1906

I am becoming somebody—I’m living the most intensely happy period of my life. –Paula Modersohn-Becker in a letter to her sister, Milly Rohland-Becker, 1906

I am beginning a new life now. Don’t interfere with me; just let me be. It is so wonderfully beautiful. I lived the past week in such a state of excitement. I believe I have accomplished something good. –Paula Modersohn-Becker in a letter to her mother, Mathilde Becker, 1906

If a man had written these words, we would get the impression of blind ambition—someone simply wanting to make a name for himself for its own sake. But a closer look at this artist’s life and the emphasis in the letter to her mother, it becomes clear this is about freedom—freedom at a time when women had little leeway to really be themselves and accomplish outside the domain of traditional gender roles.

Born Minna Hermine Paula Becker in Dresden, 1876, she was the third of seven children. She grew up in Bremen and her father insisted she study a profession so she could stand on her own two feet. While training as a teacher there, she took some classes in painting. She loved it and pursued her interest enthusiastically. In 1896, she enrolled in a school of drawing and painting sponsored by Verein der Künstlerinnen und Kunstfreundinnen in Berlin (Union of Women Artists and Friends of Art). It was one of the few options for aspiring women artists because they were not allowed in most art schools. The official justification was that women would be shocked or corrupted by the presence of nude models. She also had a wonderful experience taking classes for 7 months in London in 1892 but became disillusioned by their emphasis on effect rather than form. She was an eager student and diligently honed her skills, carefully assimilating any critique of her drawings. Over 1200 sheets are known to exist, some two-sided.

I live entirely with my eyes now and look at everything with the mind of an artist. –Paula Becker in her diary, 1896 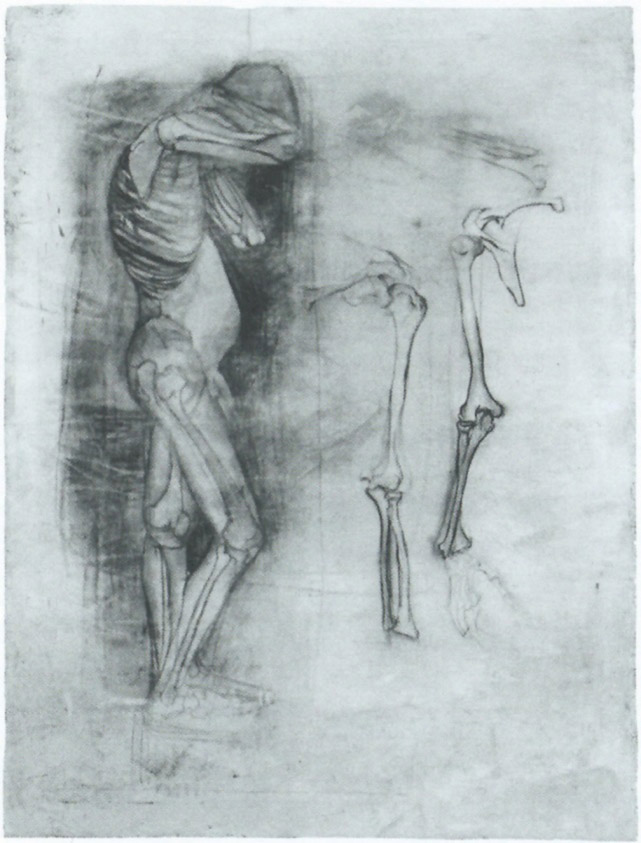 In her eager researches, she saw an exhibition of works from the Worpswede Secessionist colony in 1895. As a result of that exposure, she included Worpswede in her vacation plans in 1897. There she befriended many people including Otto Modersohn, who would become her husband in 1901, and Heinrich Vogeler, who became one of her closest friends. 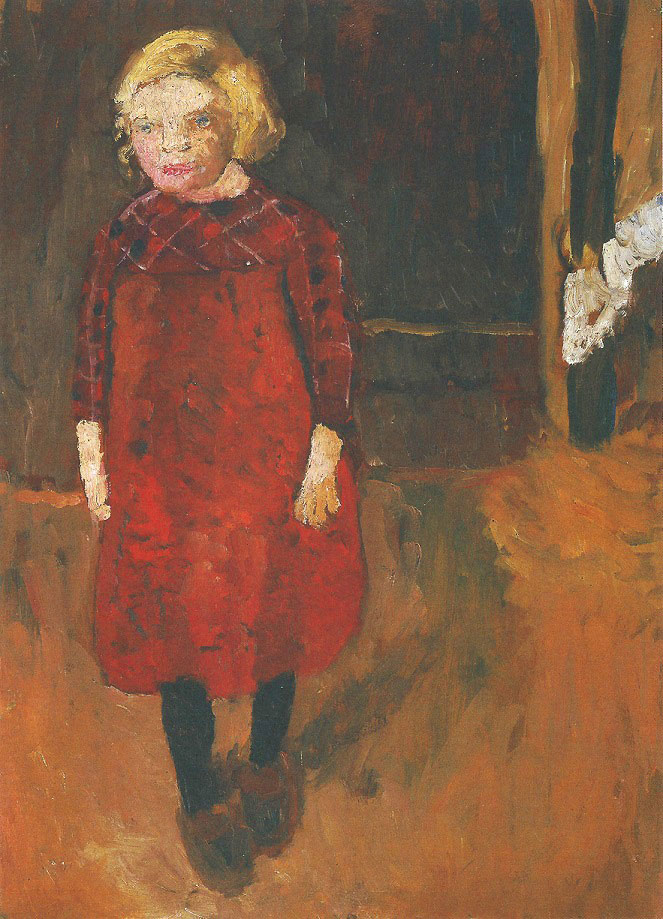 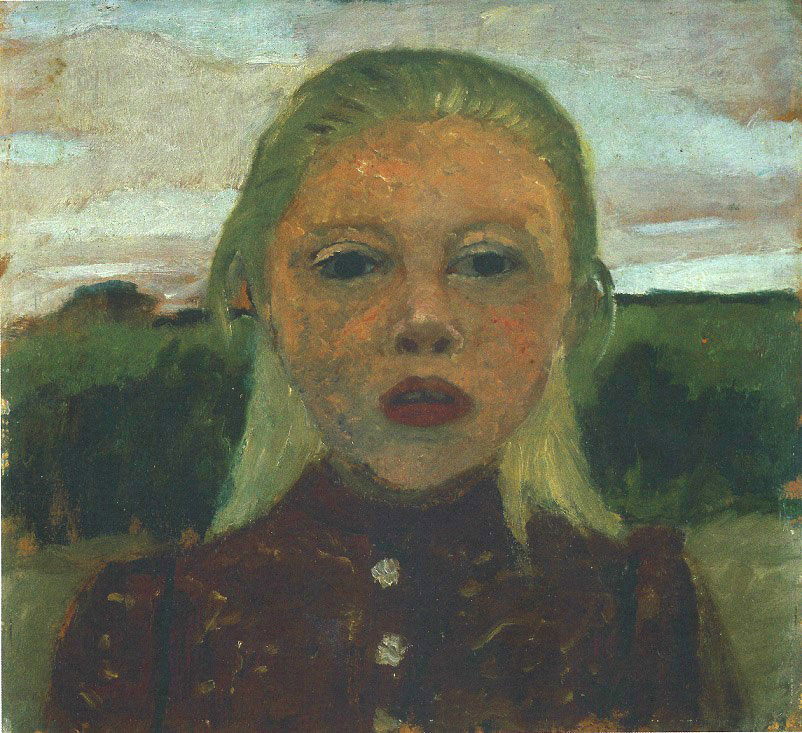 Although Becker made extensive use of the local landscape and people in her work, many of her ideas about form, composition and texture were not embraced by the group and she had to experiment in seclusion. Becoming acutely aware of the importance of Paris to the art world, she made her first of four visits there in 1900. Initially, she was a sponge, trying to learn all she could from the old masters. But in subsequent visits, she trained a more critical eye on those anointed artists who came before. She was particularly taken by a series of mummy portraits recently excavated in Egypt; they are a kind of life-cast made in one’s youth to preserve that image for eternity after death. In viewing these, she had a breakthrough and this mask-like quality is evident in her work.

I see such a lot and believe that I am getting closer to beauty in my mind. In the last few days I have discovered form and have been thinking much about it. Until now I’ve had no real feeling for the antique…I could never find any thread leading from it to modern art. Now I’ve found it, and that is what I believe is called progress…A great simplicity of form is something marvellous. –Paula Modersohn-Becker in a journal entry, 1903

One of the Worpswede children she painted was her own stepdaughter, Elsbeth. 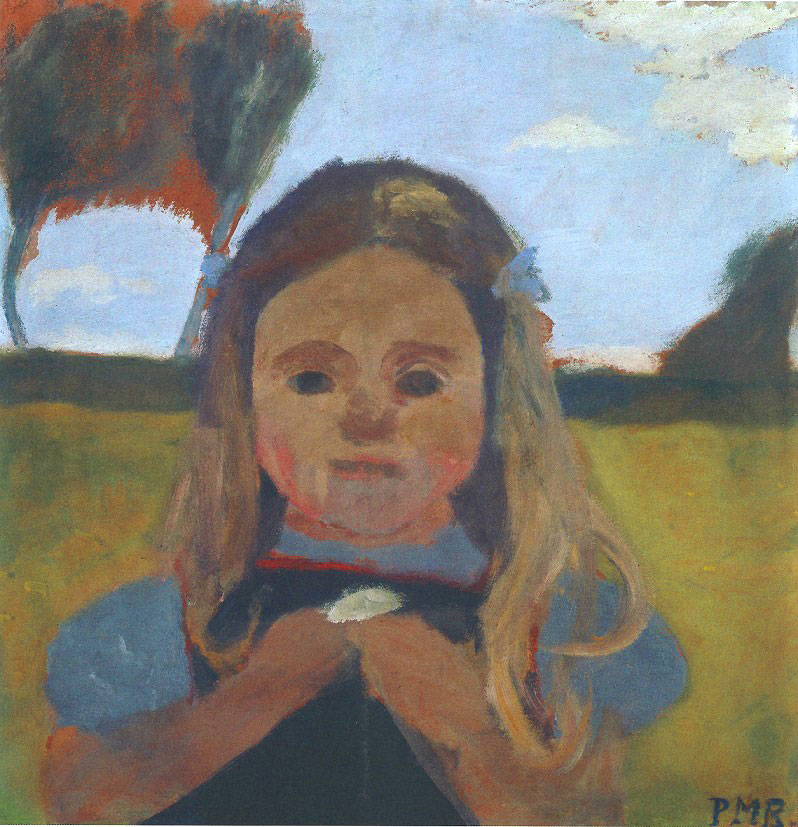 Paula Modersohn-Becker – Bust of Elsbeth with a Flower in Her Hands in Front of a Landscape, c. 1901 (cat. 15)

In 1905, she was accompanied by her sister, Herma Weinberg, who was a frequent and patient model. She took every opportunity to see the works of masters, such as Gaugin, found in private collections. She had high regard for two living artists, Charles Cottet and Maurice Denis, and made a point of visiting them as well. She alternated between Worpswede and Paris in her short career, gleaning the best of both worlds. In Worpswede, there was seclusion and beauty and a strong Germanic accent while in Paris there was freedom, vitality, the spirit of internationalism and access to the work of great masters. This alternation was reflected in the juxtaposition of Northern elements—an amber necklace, for instance—and those of the South—exotic fruits and flowers. 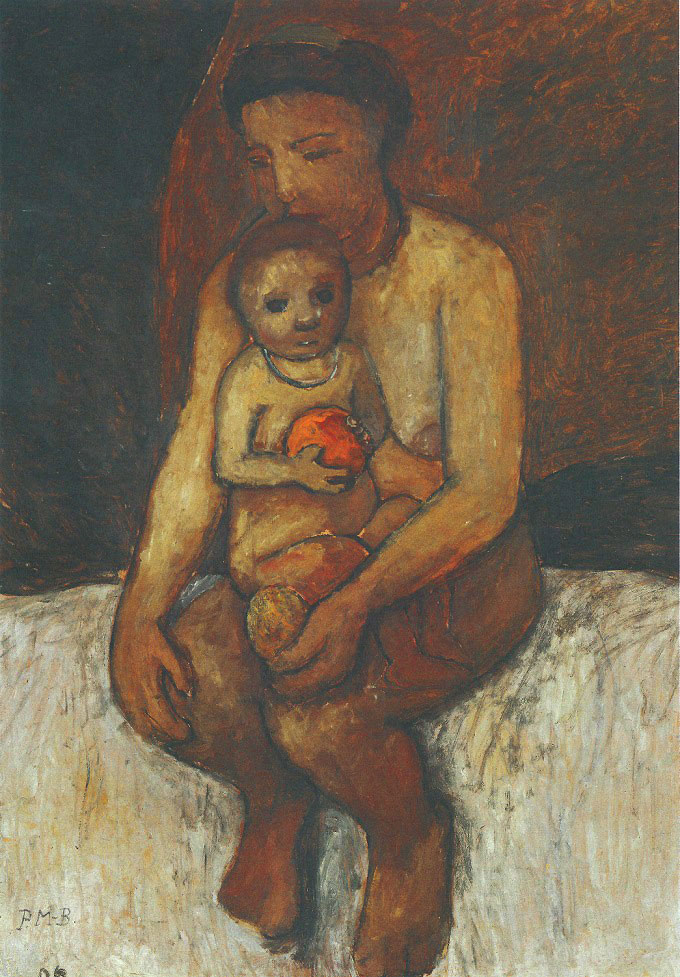 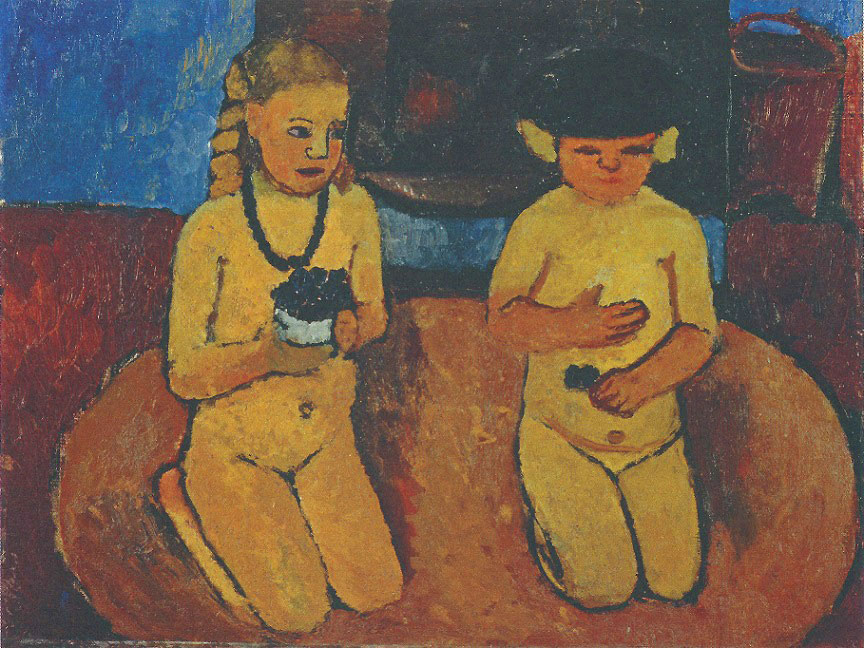 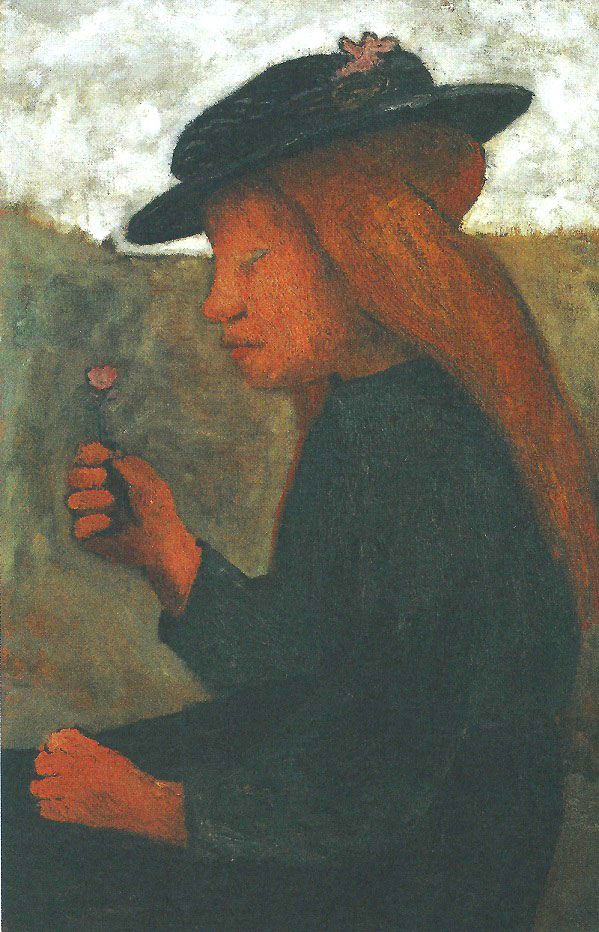 Modersohn-Becker defies classification in many ways and yet we learn much in the attempt. Living between the formal periods of Impressionism and Expressionism, some say she presages those later developments, boldly forging ahead with no role models. But I believe she expresses a raw feminism that has eluded classification simply because art movements have been interpreted in terms of patriarchal scholarship. An honest analysis of her work reveals that her subject matter is a sincere and passionate expression of the female psyche.

I don’t think a man could have made these paintings. I mean she’s already gone further than so many other artists at that time. She was the first woman to paint herself nude—and on her sixth wedding anniversary, too! –Chantal Joffe in an interview with Greta Kühnast, 2014

…when I was a child, it spooked me. The smile is strange and somewhat insane and then there is this weird intimacy, like the woman is luring you into her secret room…She holds a secret and it is intriguing, but at the same time you don’t really want to know about it because you sense that it could be something horrible. –Daniel Richter in an interview with Tine Colstrup, 2014

There are many parallels to artists who followed and Francesca Woodman comes quickly to my mind when reading accounts of her life. Both women, separated by almost a century and using different means, engaged in obsessive self-exploration and created images of themselves nude. In this respect, Modersohn-Becker is a pioneer, being credited with being the first woman to paint a full-length nude of herself. Some male artists have done this before, but never before a woman. And because her images did not express the kind of idyllic sentimentality of the female body—objects of male artistic and romantic inspiration—she once again shattered conventions, ruffling the feathers of many in the artistic community.

Art historians often lose sight of how acculturated we can be. Many have observed the strange posture of the self-portrait and the unconventional use of fruit. The simple explanation is that Modesohn-Becker was not constrained by the established modes of symbolism. She often used fruits (particularly citrus) and flowers (like poppy and foxglove) and was able to intuit a sensible symbolic meaning. Citrus was relatively exotic at the time and thus gave extra punch to the symbolism that a more mundane fruit would not have. Also, the strange pose was not used tactically to observe some convention of modesty; breasts and pubic area were in plain view. But the positioning was meant to emphasize the mystery of the female body, one hand at the breasts and the other on the belly.

Modersohn-Becker would never be accused of painting pretty pictures—portraying local peasants, including children, in a frank introspective way. This contradicted the propaganda of the National Socialist Party (The Nazis) portraying peasants as beautiful and valued subjects of the state. Thus her work was included in two exhibitions of so-called degenerate (entartet) art in 1933 and 1937. 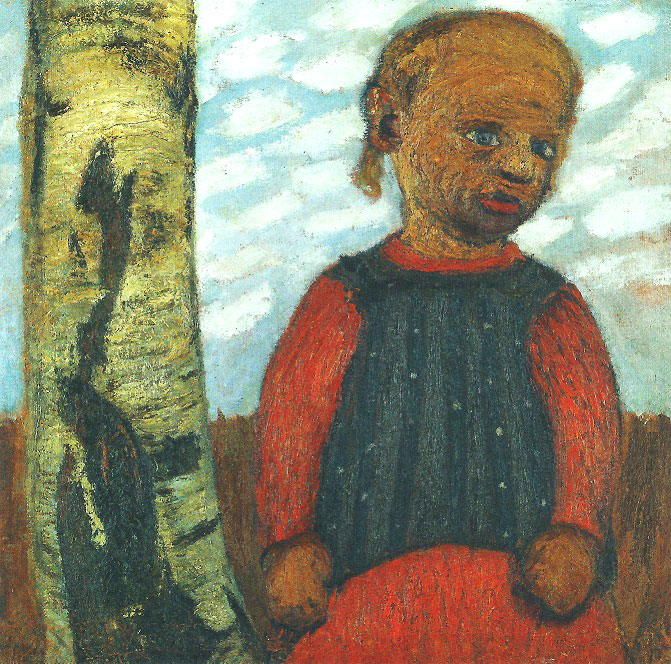 Even the least sentimental paintings of children have their charm and they were subjects in over 300 of the artist’s 734 cataloged paintings. But even here, she manages to avoid the traditional portrayals and brings us the child as a personality with a vivid inner world. “Creating free children will be the most distinguished task of this century,” (Rainer Maria Rilke, 1902) expressed the dominant sentiment of the time. Yet there is an undeniable sweetness when the children are paired with other children, mothers or an animal. The reality of a peasant’s life is hardship and work, little time for the niceties of raising and enjoying one’s children. It was quite usual, especially in large families, for the older siblings to raise the younger. This fact means that in studying children as they really were, which the artist did fastidiously, one comes away understanding that there would be a strong bond and solidarity between siblings and between children and animals in the absence of adult affection. Modersohn-Becker effectively illustrates this phenomenon in her paintings. 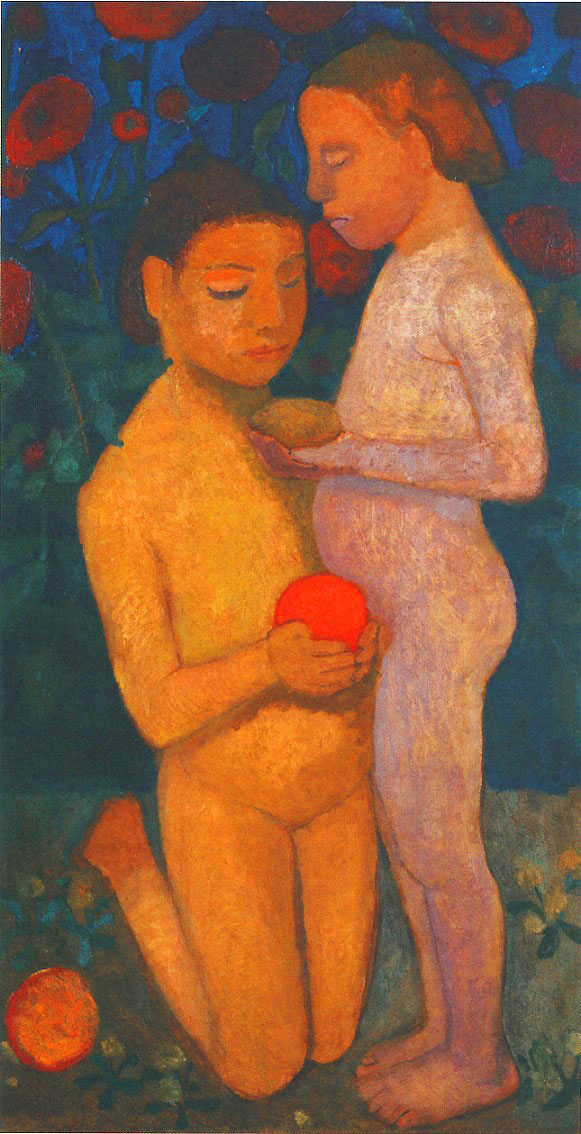 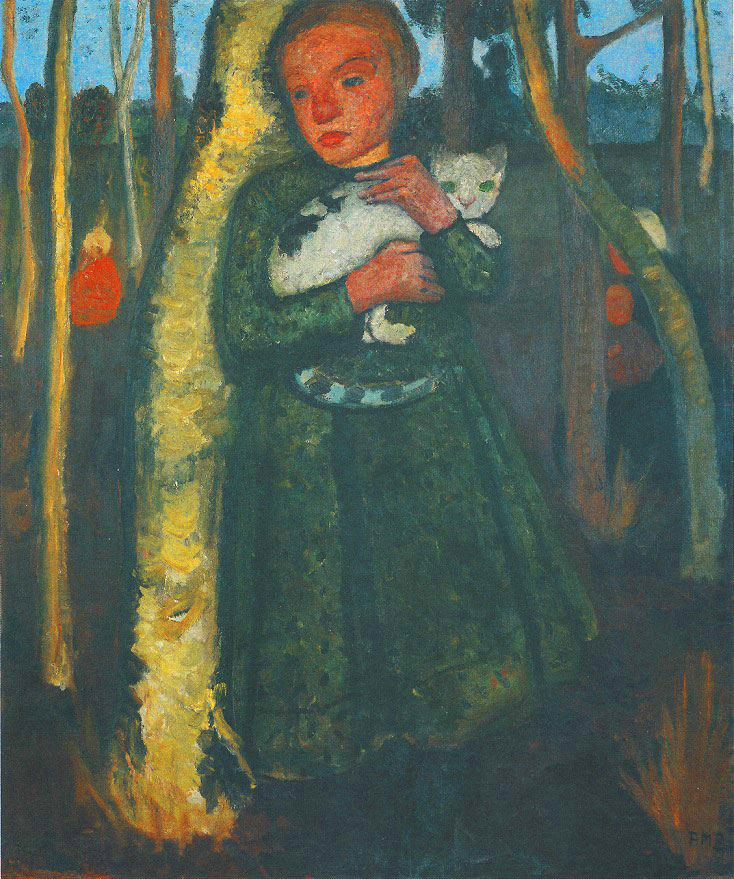 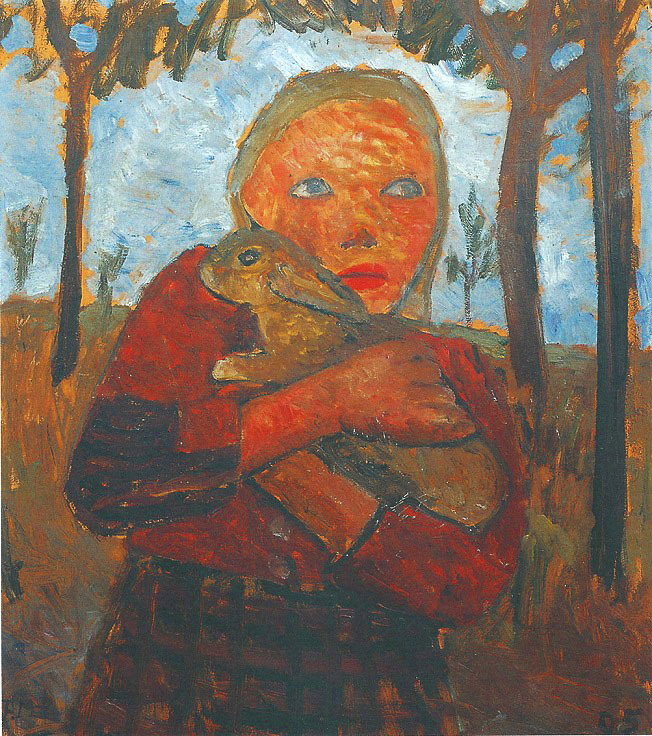 During this period, the “cult of the child” was in its heyday and images were usually idyllic and bereft of character. The portrayal of nude children were either produced as a matter of course or to exemplify ideals of purity or innocence. An examination of Modersohn-Becker’s paintings of children show them naked or wearing the most plain and indistinct clothing. This was her way of washing out any distracting cultural accoutrements and allowing the child to express the artist’s symbolic intent more clearly. Stripped of class and nationality, these images express universal ideas that can have an enduring impact on the art world, despite the artist’s short career. 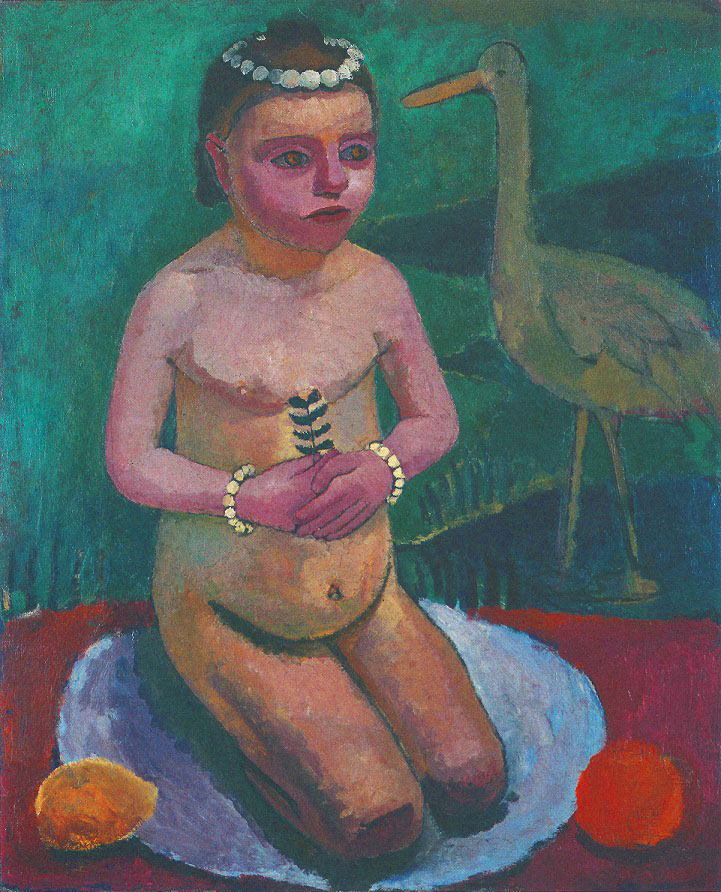 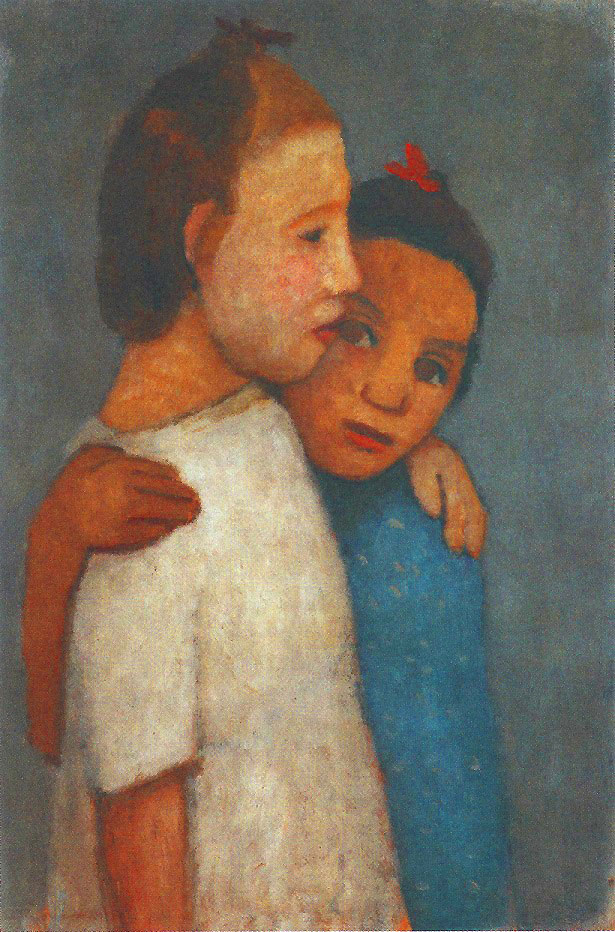 There was plenty of tension in her marriage with Otto Modersohn. Ironically, with her focus on the mystery of the female body, she failed to satisfy her own desire for children. In addition, Otto himself was just as baffled as his colleagues by Paula’s artistic ideas and was openly critical of her work. During a trial separation, Modersohn-Becker visited Paris for the fourth and final time in1906. This was a time when she really came into her own and expressed some of her most ecstatic feelings about what she was accomplishing. She returned to Worpswede one last time to try once more to have a child. This time she was successful and Mathilde was born in late 1907. Shortly thereafter Paula complained about pain in her legs which was misdiagnosed and she died from an embolism. Most of the work she did in seclusion only became known to her closest friends upon inspection of her estate. Heinrich Vogeler was one of the first and made an effort to document the artist’s output and Rainer Maria Rilke, one of her closest confidants, wrote a requiem for his cherished friend.

Many women artists have found kinship in this pioneer of feminine artistic expression. Interviews with Rineke Dijkstra and Chantal Joffe bring out many of the parallels and I believe history will bear out the long-term significance of the work of Paula Modersohn-Becker. 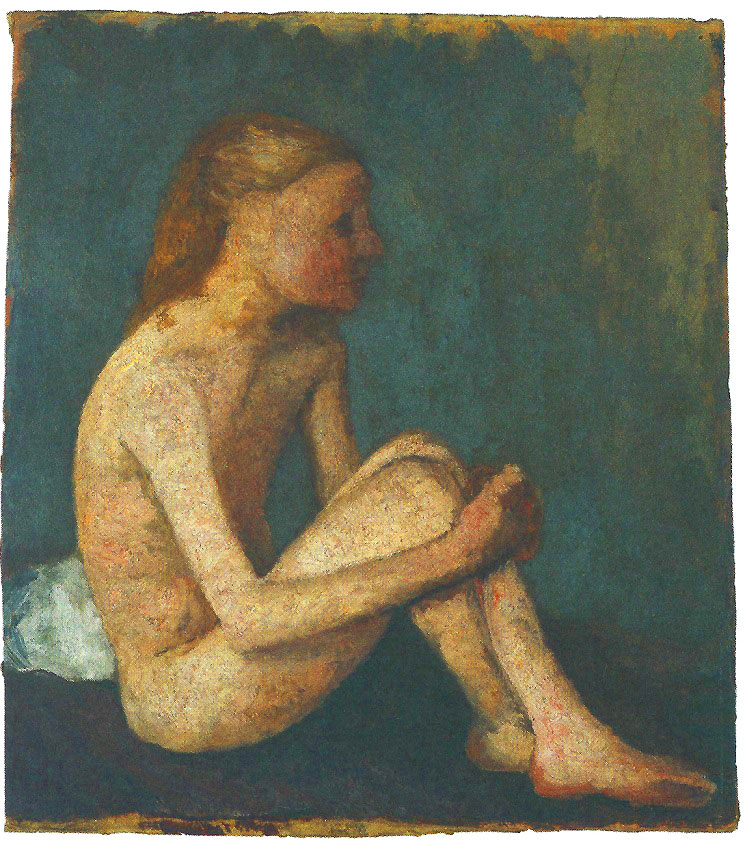 This artist came to my attention from an associate who visited the Louisiana Museum of Modern Art in Denmark during their exhibit of the artist (December 2104–April 2015). Another major exhibition is scheduled for the Spring of 2016 at the Musée d’Art Moderne de la Ville de Paris. The information for this post is gleaned almost exclusively from the museum’s excellent catalog which can be ordered through artbook.com. Unfortunately, I am told that the museum itself is currently out of stock. Hopefully, there will be a resurgence in interest in this artist and they will see fit to commission a reprint.

Below is a list of the excellent essays and interviews (in English) contained in the catalog:

2 thoughts on “To Become Somebody: Paula Modersohn-Becker”