Oliviero Toscani (born 1942) is an Italian photographer known for designing controversial advertising campaigns for Italian brand Benetton from 1982 to 2000.  With a photoreporter father, it makes sense that Toscani would have an intimate understanding of the media and politics.  His campaigns have dealt with such issues as AIDS, racial issues, war, religion and capital punishment—all in the guise of selling clothes. 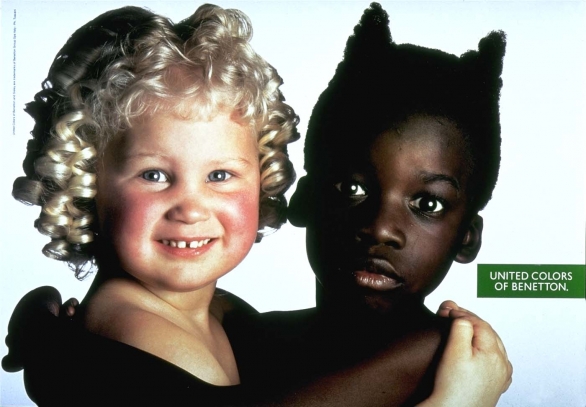 After leaving Benetton, his campaigns continued with men participating in homosexual behavior in 2005 and another against anorexia showing an emaciated woman in 2007,

In one of his latest campaigns, he takes on violence against women, for the magazine Donna Moderna.  The idea is ostensibly to sensitize Italians to this problem.  Boldly written words are placed under a picture of a naked boy (“executioner”) and girl (“victim”). According to Toscani, the point is that these values of how men treat women starts at an early age.  Donna Moderna even has a website where women who have suffered violence can tell their stories anonymously and ask for advice.

On the surface, this seems like a noble campaign with a courageous artist and concerned company willing to shock people to get the job done.  However, the reality is that Oliviero is a master propagandist helping his client grandstand in the spotlight.  And sensitizing people to the problem only makes the perpetrators more defensive and secretive.  The real solution to the problem is not sexy and would probably be of no interest to a big media company.  But for anyone interested, an excellent example of something that does work is the work of Jackson Katz and others that really gets under the skin of the problem to help turn it around.

Oliviero’s interest in communication technology is clear and, in collaboration with Regione Toscana, a new research facility for modern communication called ‘La Sterpaia’ was established in 2003.