Elena Kalis’ ancestry is Russian.  Sacha is her daughter, her muse, her model and born in the Bahamas.

A natural mermaid who could swim before she could walk; a perfect underwater model. She understands very well what I want to capture in the image. It’s not easy to find models who are graceful and relaxed underwater. It’s a gift only few people possess. -Maha Majzoub, RAGMAG, November 2012

Elena still longs for Russian snow from time to time and the way she photographs may have some surprising parallels with the snow. But in the Bahamas she found a different kind of landscape, or rather seascape. There Elena lives with her family, on a small island, where Sacha grew up.

At first Elena painted.  But the sea around the Bahamas called her to a slightly different kind of art: “Digital cameras and software offer huge opportunities for new images previously impossible to produce.” and “The dreamless, weightless atmosphere allows for all kinds of setups that are impossible outside the water.”  A good marriage of two former impossibilities.

Sacha became her main and probably her first model.  She frequently models for her mother, if that is the right word for someone who was apparently born in the ocean and has since remained there. Rather than modeling, it would be better to say she floats and dives there—swims. The Bahamas are, as cliché would have it, a paradise, but not so much above water as under it, a world less known by human beings.

It is as if somehow the underwater world is a more suitable decor for Alice, to Elena, a Waterland rather than a Wonderland to be found by a fall into the rabbit hole. The underwater world translates beautifully into Alice’s other mode of transport, the looking-glass. 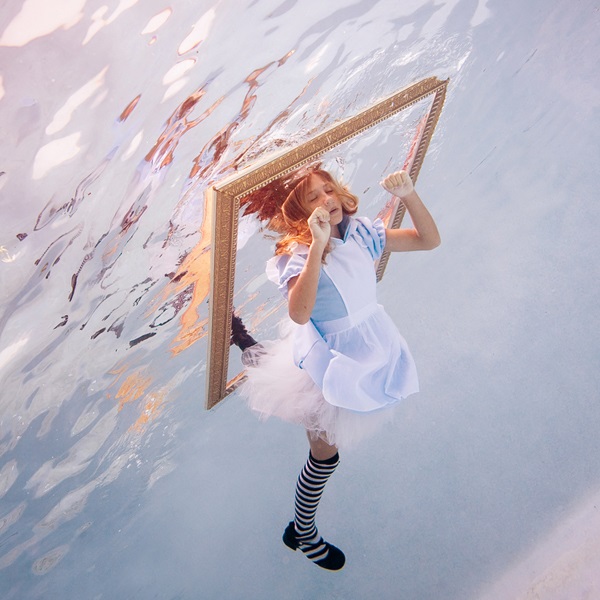 Under water, Elena lets her Alice play with all kinds of props from Carroll’s Alice stories. By reaching through the watermirror, Alice is reaching for a sphere of otherness, while she herself somehow remains the same in these surroundings.  She is still recognizable as Alice, in another of her many drawn, filmed, photographed and rewritten variations.  The timing of Kalis’ Alice is opportune as Sacha was about the right age to play that character as conceived by Carroll.  The movements of Kalis’ characters in clear, still water convey a dreamy, happy sphere—though she has sometimes portrayed the dark side of the sea.  But this is not like the dark sea of the movie The Piano, but rather a wild one—another kind of dream of the sea. The Piano (1993), was the debut of the 11-year-old actress Anna Paquin. She played Flora, daughter of the piano-playing Ada. The movie centered around Ada in the beginning and maybe a more wuthering sea suits Ada better while Flora could step into Sacha’s world more easily. But this image can also be somewhat old-fashioned.  This idea seems worth another article, not merely about this film, but about the portrayal of the 19th century girl in films based on the novels of The Brontës, Dickens and Jane Austen. 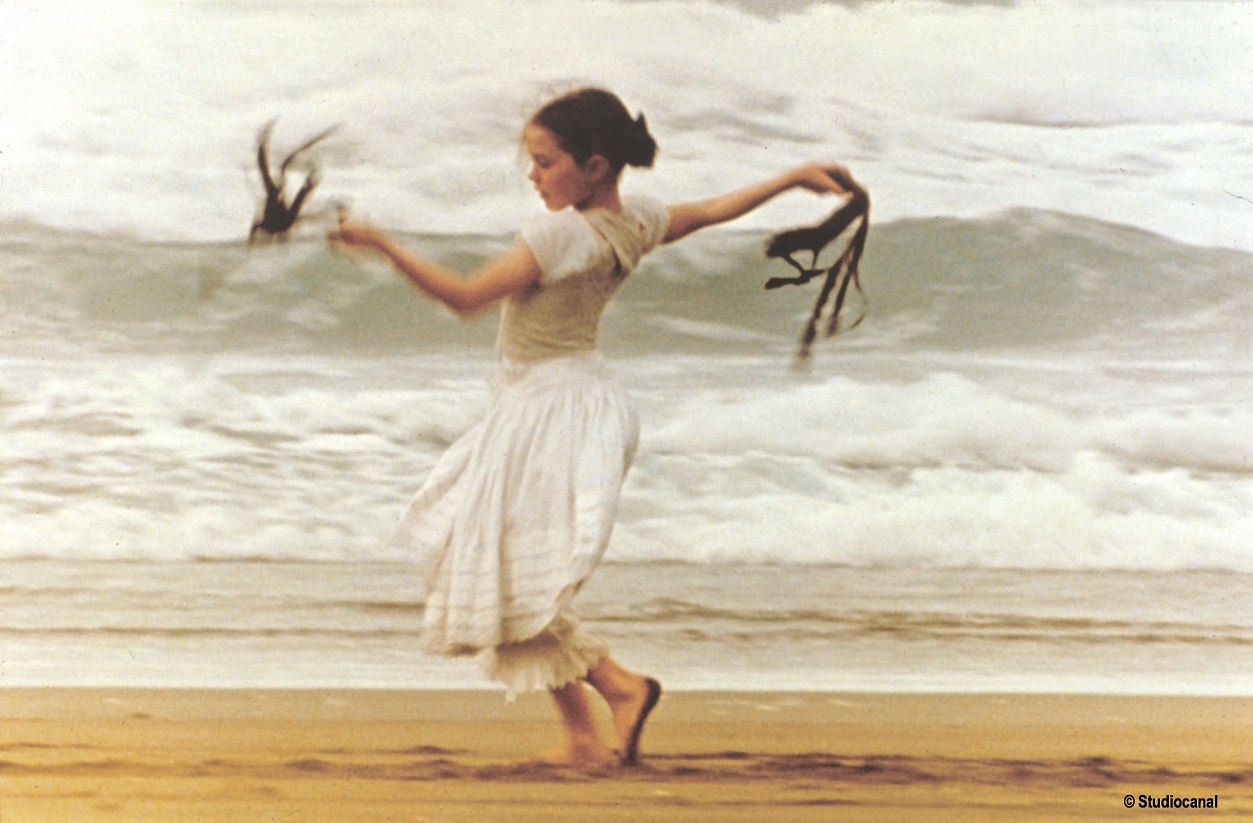 While I looked at Elena Kalis’ images from time to time years ago, I imagined myself in the images themselves, never asking myself the what and how; it was as if I, for a while, was in that sea itself. Although in beholding, in water, it could have been both anywhere and nowhere.

Now that I have looked more deeply into it, the artist has aid she prefers to photograph in the sea itself, not in a swimming pool.  This fact is more recognizable with the grown-up Sacha photos than the child ones. It seems as though the images of Sacha as Alice, and other images of her as a child, take place in deeper sea than those with the grown-up mermaid, where more often a watermirror/underwater surface is visible. It is logical to shoot underwater to create the sense of a dreamy world and yet the surface is never far away.  “Shooting mostly on sunny days near the surface, Kalis attempts to use natural light as much as possible, sometimes enlisting the help of underwater Sola light” (Maha Majzoub, RAGMAG, November 2012) and “I photograph especially between twelve and four in the afternoon when the sunlight reaches the water vertically. For the same reason I prefer to work in the summer than in winter.” (Elena Kalis, Digifoto Pro, 2011)

This artistic impression of the imagery may be suggestive of the general idea of childhood as a dream state and the so-called adulthood more as reality. But what is more a dream? Alice? Or an example here out of the series ‘Life Style’? 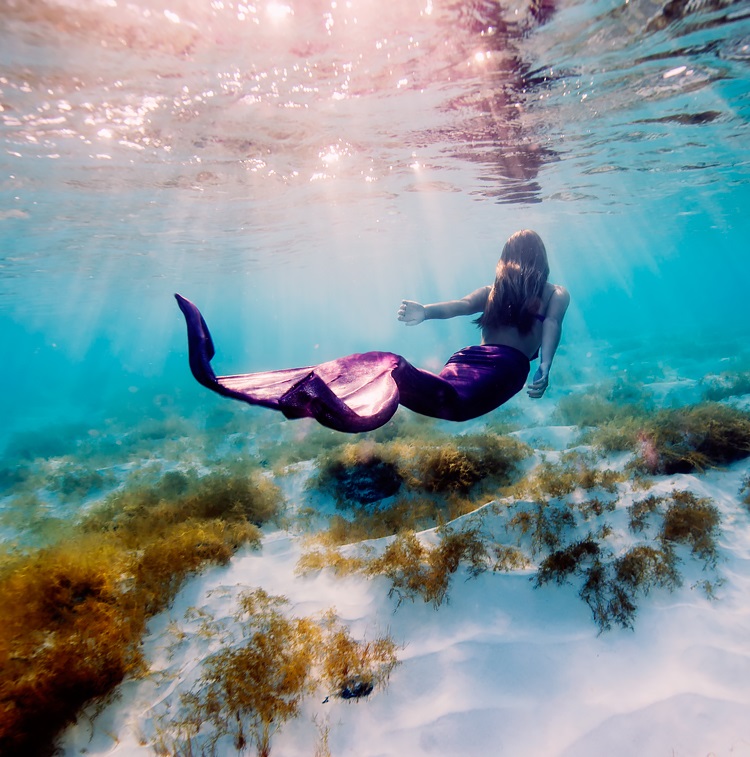 Alice in Waterland appears as though it is taken in a big aquarium, or simply a swimming pool—a photo studio placed underwater. The impression is that of a dream just before a state of waking or, with these utterly clear photographs, a lucid dream. 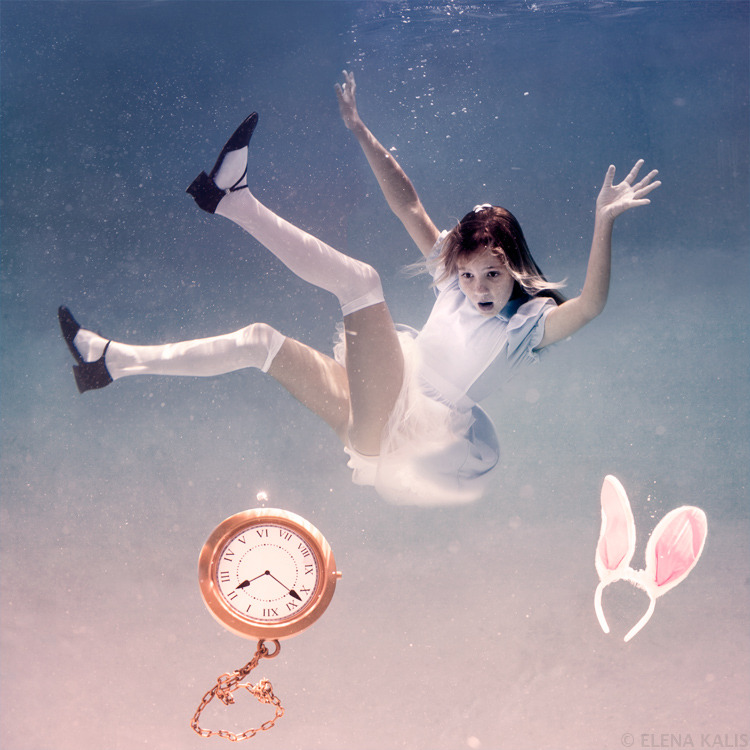 The artist uses a Canon 5D Mark II in a waterproof housing, sometimes using a red underwater filter.  When working with adult models she can work underwater for about an hour but only 30 to 40 minutes with children.  Afterwards, she makes use of the techniques of PhotoShop. Despite the fact that she sometimes uses artificial light underwater and the shallow parts of the ocean can catch sunlight wonderfully, this alone is not enough for her to capture her characteristic colorfulness.

Beside playing with colour saturation, photographer and model use plastic inflatable animals, but filled with water so they’ll work better underwater—and they play with costumes.

“The waving movements that clothes make in the water, give interesting forms and light reflections. To get that waving movement, models only have to move calmly and spread the clothes. The rest comes naturally.” -Elena Kalis, Digifoto Pro, 2011 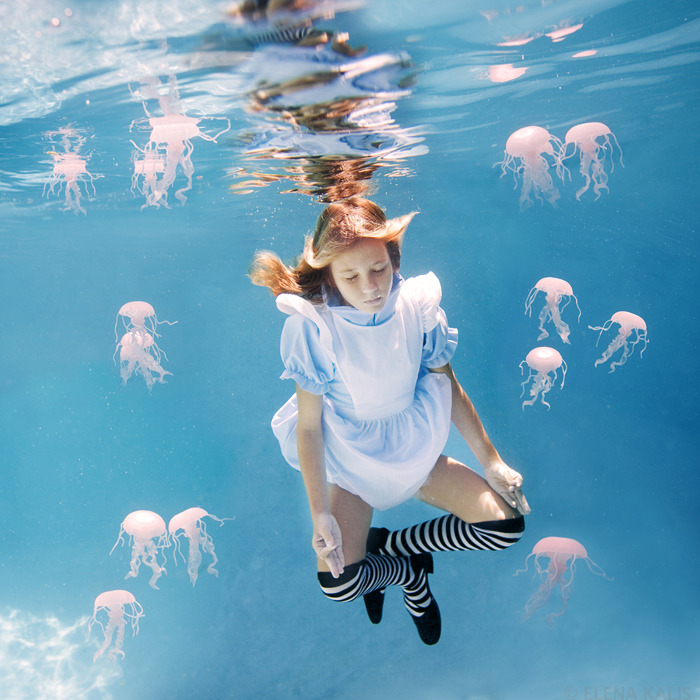 Sacha also dressed up as the schoolgirl Raye Hino, better known as Sailor Mars, from the anime show, Sailor Moon. 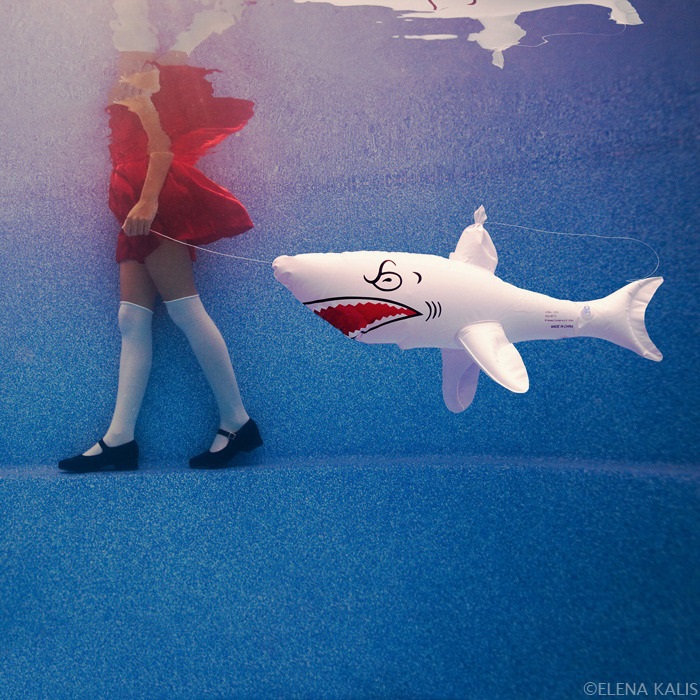 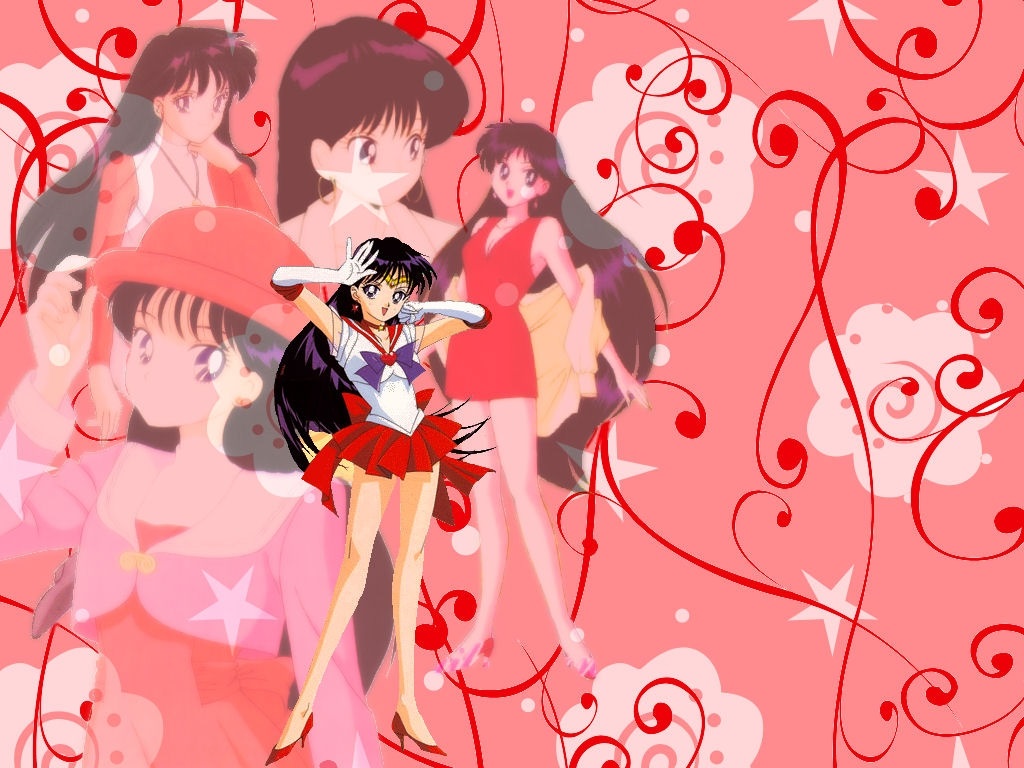 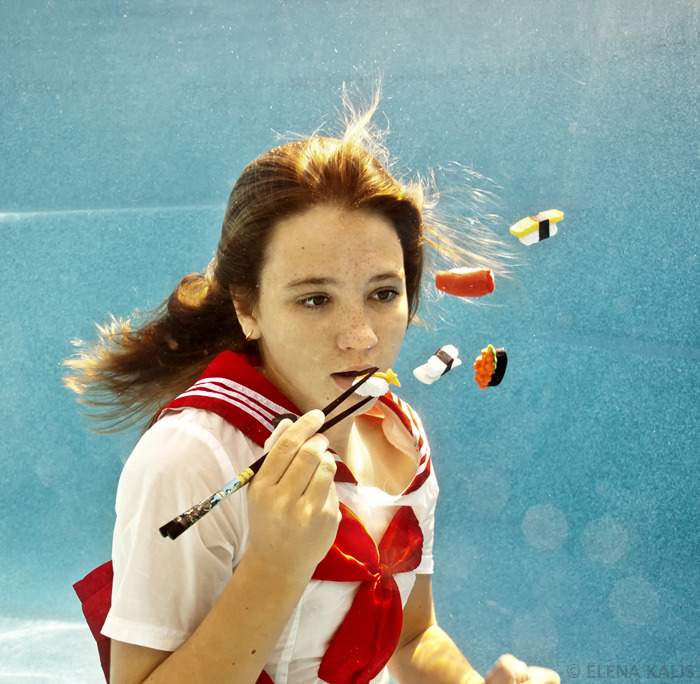 Other series with Sacha as a child are in the same sphere, emotional fairy tales, but with titles derived from the elements from which it all takes place: ‘Ocean Life’, ‘Ocean Song’, ‘Liquid Joy’. 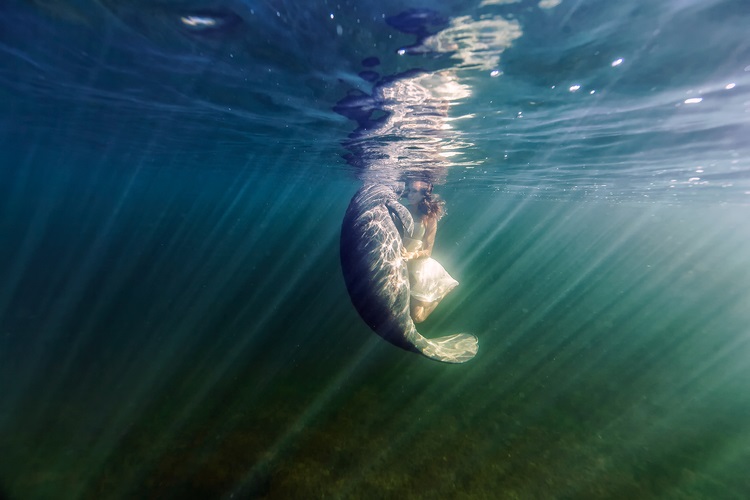 A variation on Alice in Waterland: ‘Neverland’. 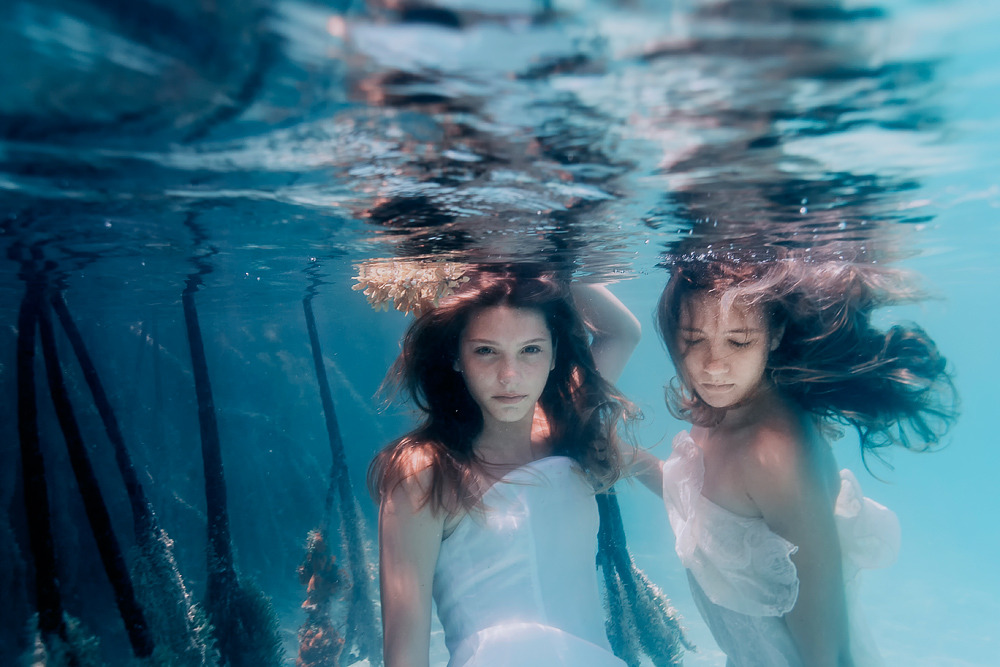 The female element in her element: ‘My Fair Ladies’ 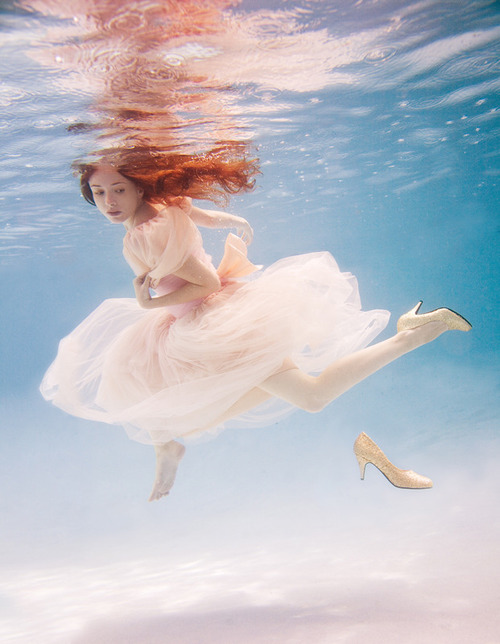 But also about the other aspect of the sea: ‘Dark Tales’ 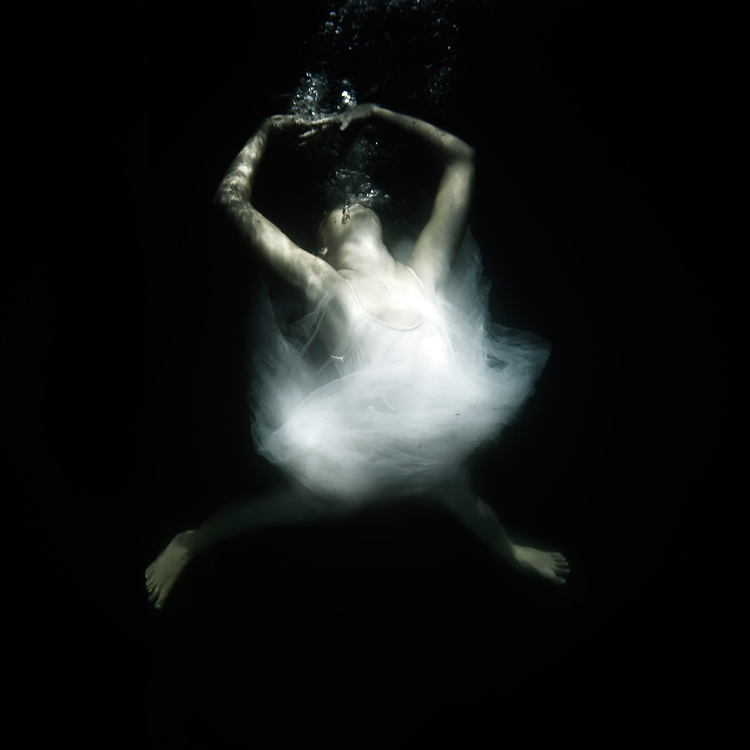 Sometimes the same series is released under slightly different titles, like ‘Dark Tales’ and ‘Dark Water’. Or sometimes the same pictures appear in different series, usually on different websites. With so many sites, it is not always clear what the relationship of her series to each other is. And many fine pictures like Atlantis seem merely to emerge via a Google search on sites that have no direct connection to Elena Kalis with unclear connection to a particular series.  So now an observer must try to deduce, immersed in all her images, a way of categorizing, hoping it will make sense emerging as if from the sea. 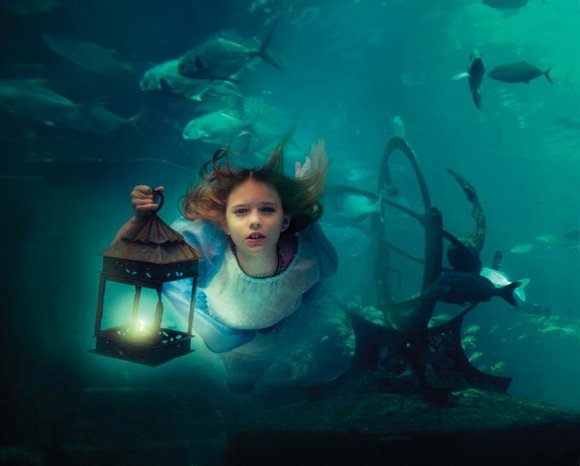 The dream goes beyond just the image, but the dream of a better world.  Even the Bahamas is influenced by a corrupted world: the globally rising sea levels, an oil refinery in nearby Venice, oil leaks, floating plastic that gets into the food chain, etc.  Elena has produced ample work which appears on several sites and on social media.  The importance lies in the images themselves, any comments usually short and complimentary.

Digging with a pen and writing in the seabed leaves few traces behind. But doubtless there are reasons why Elena photographs women and girls.

“Female characters are prominent in my work, as I love to explore the softer and more feminine side of underwater photography. My images flit back and forth between happy and sad, dark and dreamy, but I always stay true to the elements that inspire me. I am inspired by the way that humans can interact with the elements underwater, as well as they can move. It allows for a more fluid and dreamlike way of capturing motion.” -Elena Kalis, The Practice, 2013

I would hang these these photographs in my house just like that and not just above my bed or couch. Here and there in the house there would be a little bit of Waterland mixed in with dry land, possibly crisscrossing just like an aquarium. And maybe an added touch with Alice and Sailor Mars or Sacha as minidolls.  Happily, I would not be constrained with only showing the more heavy portrait photography.

What more is there to say than that Elena in her Alice, Sailor Mars, Liquid Joy, Stingrays, Manatees and Neverland, imagines a girlworld that is perfectly appropriate for adults? Elena imagines a feminine sea in which her daughter and other girls and women can still express whatever beauty still remains of the Earth. And now there are these snapshots of beauty which may last forever. In her photography she has, in a manner of speaking, created and experienced growth, with her daughter.

She does not see her art as work; it is her style of life. Does she regard that reality underwater as a dream?   I imagine creating these images captured from her own unconscious is not easy.

Dimitri is a guest writer from the Benelux region.  He did his best to translate things into English, so I had to do some editing to make it more coherent to English readers.  I hope I did it justice.  Also, any more biographical information on the Kalises and dates of the artwork would be very much appreciated.  -Ron

Other sites featuring her work here

Online articles on Elena Kalis (some in German and Dutch) here

1 thought on “Elena and Sacha Kalis: Mother and Mermaid”