I had planned to spend the entire month making posts on artistic horror imagery, including a dissection of two of my favorite horror films featuring girls, but due to circumstances out of my control I have not had much time to work on Pigtails.  I will try to work in three or four posts that adhere to the theme though, and this is the first.  The artist is Samantha Everton, a photographer based in Melbourne, Australia whose work often incorporates children, particularly young girls.  Of special interest for us this month is her series Childhood Fears, where she explores the darker side of girlhood.  Her palette is stark and cold—black, white, blues and greens—and a sense of dread pervades her images, making them a good fit for October.

The first two pieces directly confront the common childhood fear of stranger abduction.  Though it is extremely rare, society and media constantly remind children of ‘stranger danger’, making it a ripe area for artistic exploration of childhood fears.  These photographs use the common semiotic convention of the innocent girl-child (in a white dress) against the blackness of night to express the anxiety and menace of the faceless stranger approaching his potential victim on the road in his big dark automobile.  In the first image, the girls’ vulnerability is reflected in the sheerness of their dresses, and there is a certain sexual tension in visibility of their legs through the flimsy material.  In the second image, the girl runs away, but there is little hope of her outrunning her stalker. 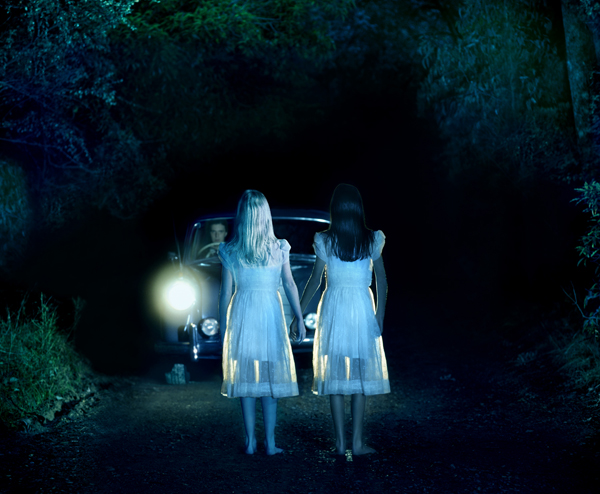 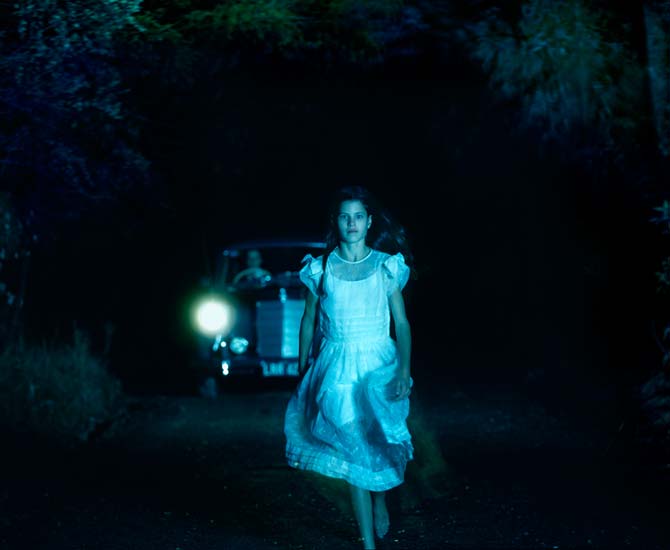 The remaining photos settle on domestic unease.  The first of these presents a birthday party, but there is no joy here.  Everything feels overly stiff and formal, devoid of emotion, even mechanical and inhuman.  The title of this piece, Fear of Understanding, suggests that there is perhaps some unspoken secret that everyone present senses but does not fully grasp, the revelation of which will be devastating for all involved.  Thus, it remains the elephant in the room.  Questions abound.  For example, why does the dark-haired girl have a cupcake while the other girl does not?  And why does she need a cupcake at all when there is a full-sized birthday cake?  Whose birthday is it anyway?  Here again are those gauzy white dresses on the girls (mimicked, it must be said, by the translucent curtains), while the parents wear darker, more subdued clothing. 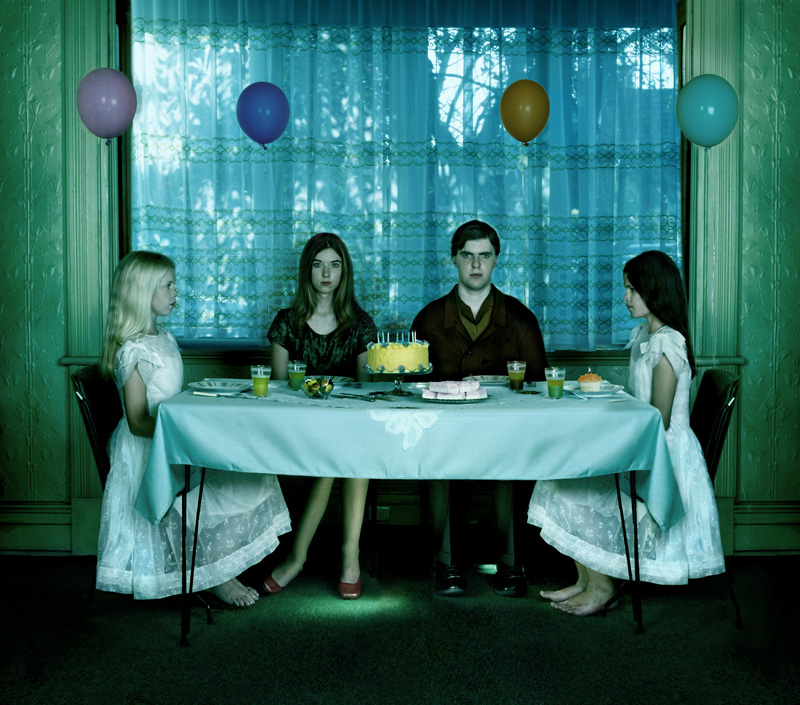 The next image uses the exact same setting, intimating that it is part of the same narrative as the image above.  Here the blond girl sits alone, covering her eyes.  Has the terrible secret been revealed at last?  Why does the girl cover her eyes?  Is she crying, or is there something she is afraid to see?  The birthday cake and other desserts remain untouched, and there is something menacing implicit in the silhouettes of the trees behind her.  This image effectively taps into what is perhaps the quintessential childhood fear: isolation. 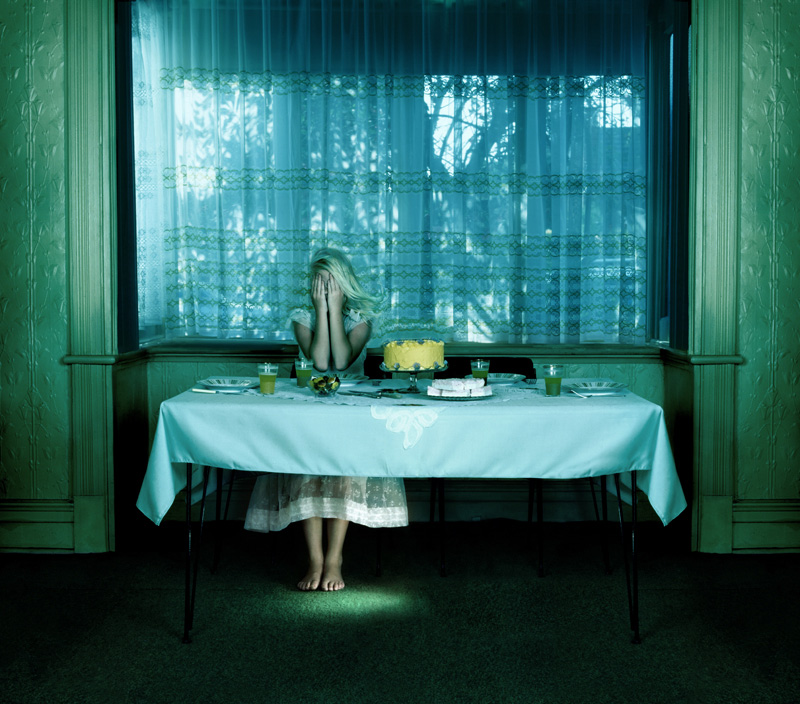 The next photo addresses another childhood dread: the breakdown of the family.  As the child passes outside her parents’ bedroom, she is aware of something wrong and terrible happening between her mother and father—an argument, maybe, perhaps owing to the revelation of the big secret generating the tension in Fear of Understanding—which is only hinted at in the image.  Mother sags on the bed as father stands before her, his stern reflection captured in the mirror.  If I keep my eyes closed, the girl thinks as she passes briskly by the open doorway, I can ignore what is going on and pretend everything is normal again. 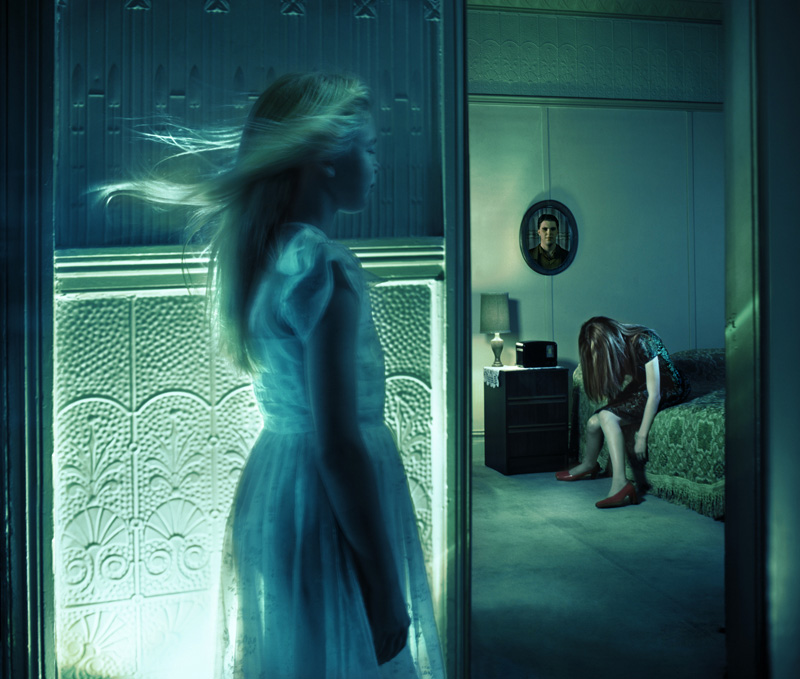 Samantha Everton – Childhood Fears – If I Keep My Eyes Closed

And now our girls stands quietly backlit in a dim hallway, her eyes still closed.  This is my favorite of these images.  Perhaps nowhere does the girl seem more vulnerable and ethereal than she does here.  The darkness behind her holds such portent and foreboding. 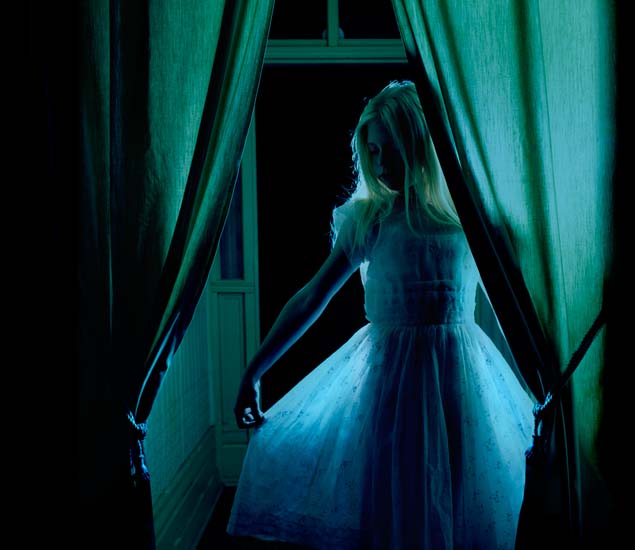 In the next piece, the two little girls stand side by side beneath twin copies of what appears to be Thomas Lawrence’s Pinkie, though you’ll note that one copy seems to have blond hair and the other dark, and that their positions are reversed from the living girls in the photo.  The meaning here is much more oblique, and the key to it all may be the pigeon in the blond girl’s hand.  Pigeons, being famously one of the first domesticated avian species, is thus symbolic of the home.  And yet, the presence of the bird here feels odd and out-of-place.  Likewise, the dark-haired girl’s hair billows while the blond girl’s hair remains still.  Although these girls are around the same age and dressed identically, they do not project a familial bond.  It’s almost like they are standing in the exact same spot in the same home at very different times and are completely unaware of each other.  Once again, there are hints of some strange and unnatural narrative here.  One can easily imagine an entire story with this photo series, where one of the children is a ghost haunting the other one without her awareness.  I think it is the dark-haired girl who is the ghost.  What do you think? 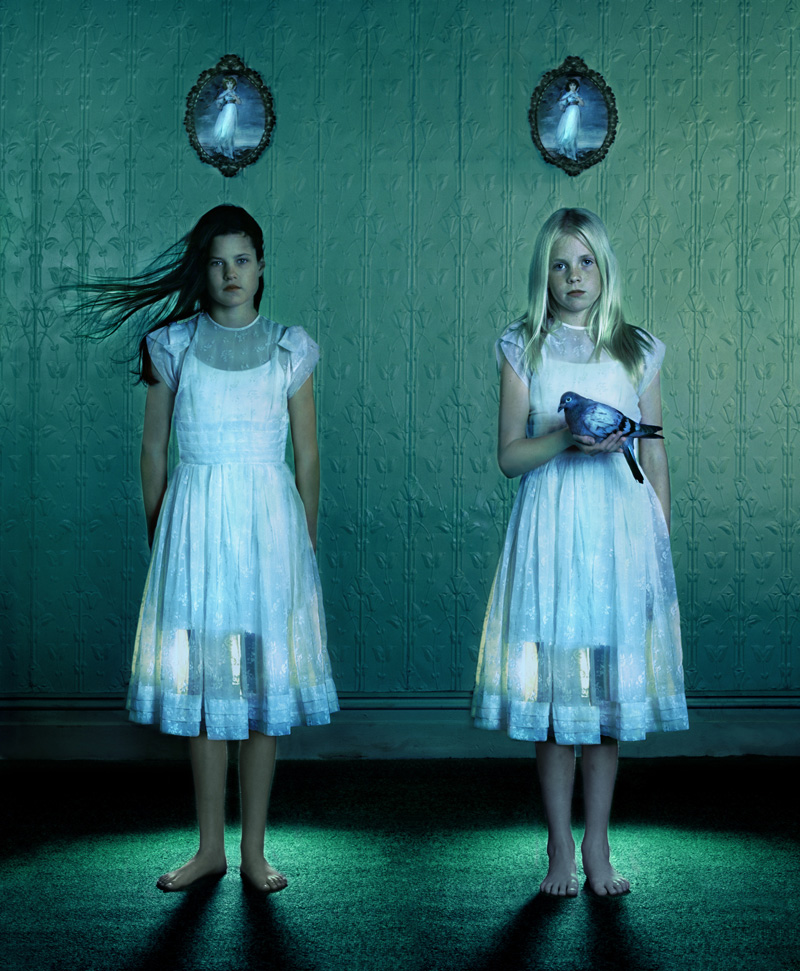 My evidence for this contention is this next photo, where the brunette girl is absent entirely but the second Pinkie is still in place! 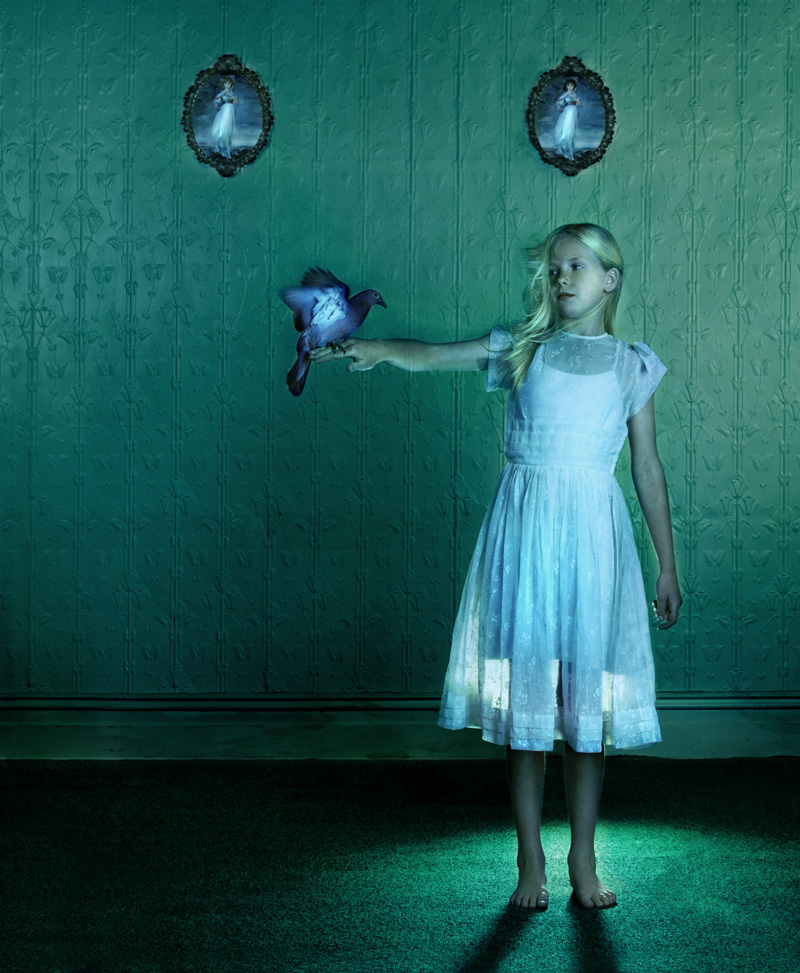 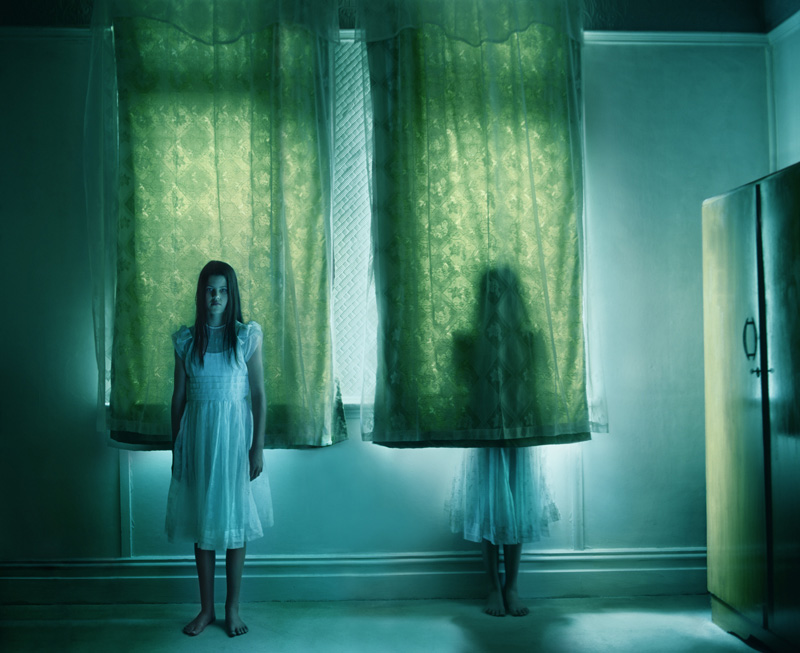 The notion that the darker girl is a spirit casts the birthday party scene in a whole new light too.