In order for Pip to get screen shots for his film posts, I have had to dig up a number of films for him. In the case of Carlos Saura (b. 1932), director of Cría cuervos, there was some interesting biographical information. Not only was he an avid photographer before deciding to become a filmmaker, but he seemed to be specially compelled by his child subjects. Most probably because of his own childhood experiences, Saura speculated that it was de rigueur for Spanish boys to get their first education about girls and the erotic world via their female cousins. In fact, two films—La Prima Angélica (My Cousin Angelica, 1973) and Pajarico (Little Bird, 1997)—dealt specifically with the childhood romance between cousins. Some mention should also be made of Ana y los Lobos (Ana and the Wolves, 1972) because even though the girls in that film perform the bland role of dutiful children, there are interesting clues about family dynamics which inform many other Saura films.

Lobos is about a young woman, Ana (Geraldine Chaplin), hired by a family to serve as governess for three little girls—Natalia (Nuria Lage), Carlota (Maria José Puerta) and Victoria (Sara Gil). Three brothers and their mother live on the estate and over time, Ana learns that each of these four characters have terrible neuroses which she takes in stride with both curiosity and amusement. The men react badly to this and, in the end, punish and murder her. The girls are in the background during the entire film, but do not stand out as characters, performing their roles as well-behaved stereotypical little girls. There is one distressing incident when the girls find their dolly buried in mud and her hair cut by one of the brothers. As the drama plays out, there is always this tension in the back of one’s mind about how the girls will develop and be treated when they grow up. Angélica seems an autobiographical account of Saura’s own late childhood. The lead character, Luis, is interring his mother’s bones in the family crypt, staying with his aunt, with whom he spent some memorable summers. During the visit, he recalls incidents from his first summer there almost forty years earlier. The flow of the story is confusing at first until one realizes that the same actor (José Luis López Vázquez) is playing Luis and the young Luisito and you have to pick up clues from the scene to keep it straight. An additional ambiguity is that his beloved cousin Angélica (Lina Canalejas) has a little girl Angélica (Maria Clara Fernandez de Loaysa, who also played her mother as a little girl in flashbacks). The elder Angélica seems always to be wearing a kind of proper uniform during reminiscences. The presence of an older adult actor playing a child makes him appear like a developmentally-delayed adult. It is disconcerting at times when he leers with fascination at Angélica as in one scene where the family thinks nothing of undressing and dressing the young girl within eyeshot of her cousin.

There is a lot of fun interplay shown in the film between Luis and both Angélicas. In one scene, he is dressed in a Roman uniform and told to stand like a statue while Angélica makes faces at him, seeing if she can get him to crack up.

The younger Angélica is curious about Luis’ old relationship with her mother, asking a lot of questions about it and seeing if she stacks up to her mother.

A strong friendship is rekindled with Angélica and her family and Luis forms a pretty strong one-on-one bond with the daughter. One day, he takes her to where her mother etched their names on a tombstone.

The young Angélica jokes about how the boys take no interest in her because she is not well-developed, supposedly unlike her mother at the same tender age of 9.

Luis then flashes to a time when the elder Angélica showed him her first bra, with him begging her to show him again.

Although Luis seems to be enjoying his visit, a lot of bad memories of the war are associated with it as well. He decides that he has had enough self-indulgence and decides it is time to leave. The younger Angélica is outside riding a bike and Luis asks if he can try it before departing. He pedals with her riding along and we get one final flashback of him having done the same thing with her mother. Apparently, it was part of a scheme to runaway together, but the youngsters’ plans are foiled when they encounter a patrol who brings them home where they are then punished for their folly—never to be together again.

Saura’s view of life seemed quite pessimistic in the 1970s with characters expressing all manner of dysfunction with only one precious memory of romance. Even in Lobos, the matriarch makes mention of the scandal of a family member falling in love with his cousin. Over the years, the director must have mellowed as he attempted a more modern version of this family romance in Pajarico. The three brothers seem to be modeled after those from Lobos, but in nobler forms. This time the girl is called Fuensanta (Dafne Fernández) and the boy, Manuel (Alejandro Martinez), is played by a 10-year-old. There are a number of similarities to Angélica with Manuel being “abandoned” by his parents for the summer and needing to stay with his extended family in Murcia. The film is divided into three chapters, each dedicated to one of the uncles. The first is Juan, who picks up Manuel. His namesake in Lobos was a womanizer with dark erotic fantasies, but this one is an artist and appreciates women in an aesthetic way. He makes his living running a tailor shop and a number of women work there. Manuel has three girl cousins but we see very little of the other two, Amalia (Rebeca Fernández) and Sofia (Andrea Granero) . Fuensanta makes a big entrance at the shop wearing a fancy dress. This worm’s-eye view is the result of her being picked up and placed immediately on the counter by her father. 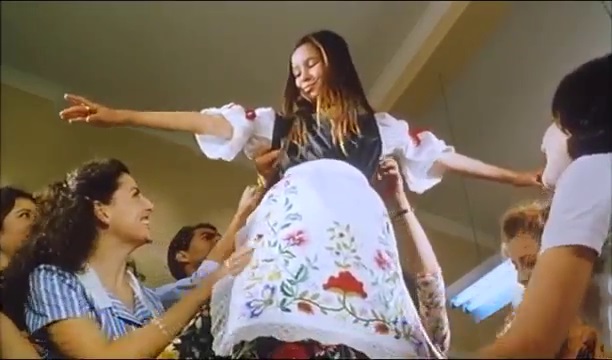 Juan takes Manuel and Fuensanta to draw and learn the finer points of color and composition. Later, he shows them some art books and expresses some envy at the skills of past artists—the way they were able to add mystery to their work. 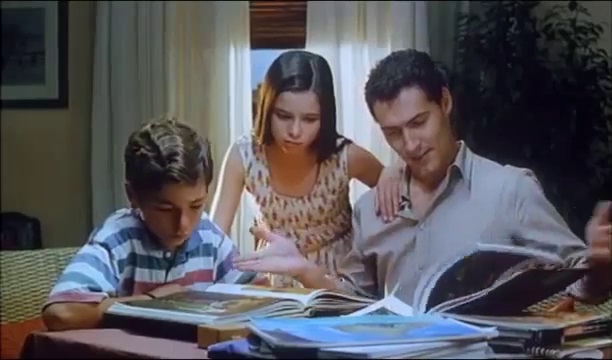 Fuensanta playfully coaxes Manuel onto the roof where they bond and share some secrets. 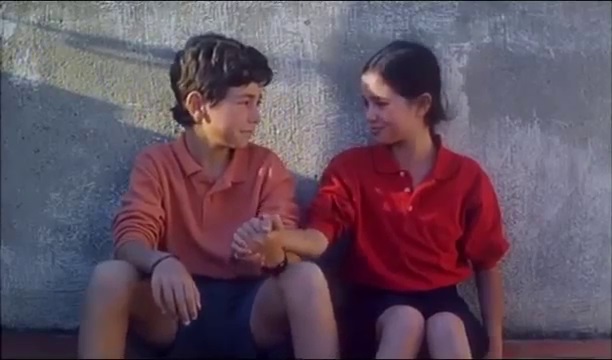 Fuensanta’s first big secret introduces us to the second uncle, Fernando. His namesake in Lobos is quite disturbed by his homosexual proclivities and devoted himself to meditation and penance in a whitewashed cave. He was the one who cut the dolly’s hair and buried her. This Fernando is seen making love with his boyfriend, Tony, in the cellar of a pastry shop where he works. The children are bemused by this spectacle. 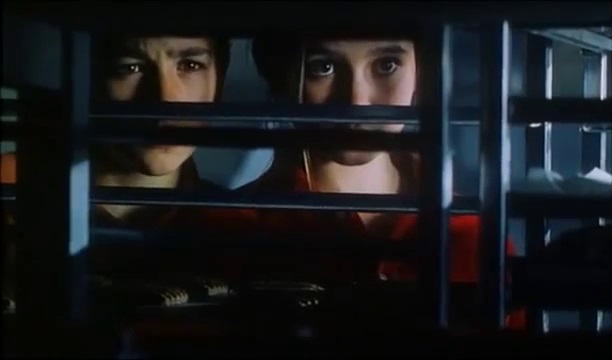 Fernando is an artist too and plays the cello beautifully. Unfortunately, his lover has fallen in love with a woman and is planning marriage. In a state of despondency, Fernando has a heart attack and is sent to the hospital. The third uncle is Emilio and, like his counterpart (named José in Lobos), is the de facto head of the household even though the decrepit grandfather still lives. He is a scientist, an optometrist of sorts who practices the rare craft of iridology. The children wander into his office and explore a bit before coming upon him. He explains that the iris tells a story about each person and asks Fuensanta to sit in front of a machine so he can examine her iris. 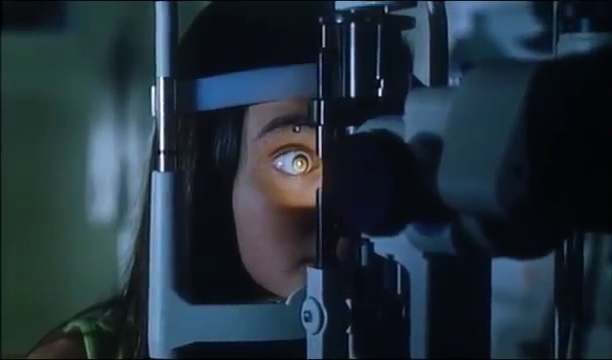 He finds a mysterious pattern in one region he cannot explain. It is meant to hint at Fuensanta’s telepathic abilities. For example, the grandfather is only partially lucid and so sometimes makes strange-sounding requests. Whenever this happens, she quickly explains that he is simply asking for orange juice or wishes to have the blinds closed. Mistaking Manuel for his favorite son, Antonito, and knowing he will die soon, grandfather decides to reveal a secret he has never told anyone before. 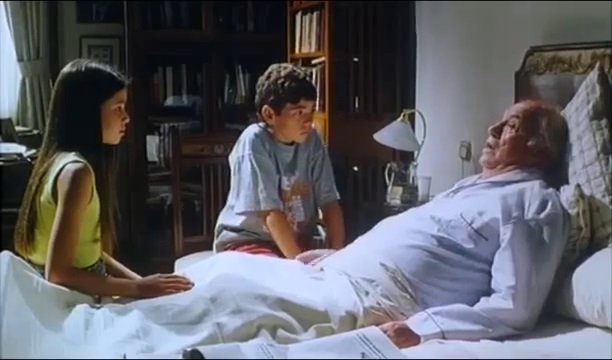 Apparently, one of the secrets Fuensanta shared with Manuel was her telepathy. The rest of the family only learn of it when grandfather inexplicably disappears and only Fuensanta knows how to find him. He is discovered in a park and he says he got lost while trying to get to the sea. Emilio promises to take him there and there is a final idyllic scene with grandfather sitting in a chair staring into the sea while everyone else frolics on the beach. The instant he passes away, Fuensanta senses it immediately and turns around to look back at him. 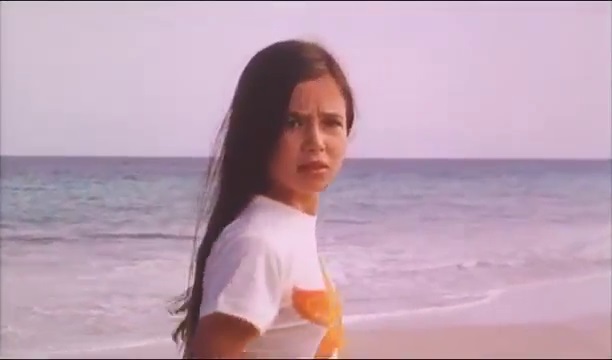 Manuel might have had more time with his uncles and cousins except for the funeral compelling his parents to return and then take him home. Looking one last time at Fuensanta, Manuel realizes he will never see her again as she is now. 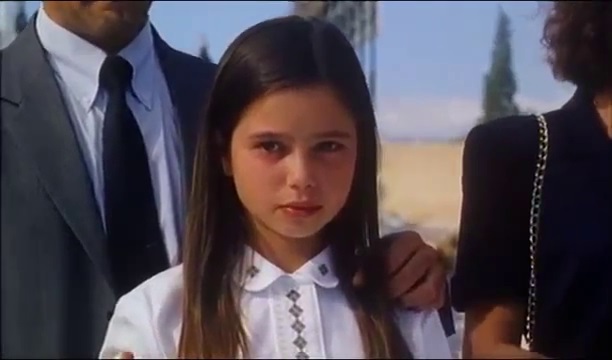