As mentioned in my very first Pigtails post, I spent my young adulthood in the U.S. Army. And even though I lived under the rigors of military discipline, it was a time of relative freedom for me. My platoon sergeant had a huge collection of Disney films which he brought so we would have something to watch while we were living temporary barracks. Like most people, I assumed cartoons were just for kids and were not very sophisticated, but these Disney shorts had a humor that could only be appreciated by adults. Walt Disney was not producing films for kids, he was producing them for himself. I became fascinated with the evolution of the Disney Studios and read everything I could get my hands on. I read in one account that Disney wanted to prove that a full-length animated feature was possible and would be respected by the general public. Snow White and the Seven Dwarfs (1937) was the first of these efforts. It was important to him that the characters be believable and not just caricatures. To that end, he challenged his animators to make every effort to pay careful attention to detail and find a way to give the heroes and heroines sex appeal. Of course, in those days it was not acceptable to say the word “sex” in mixed company and thus when referring to this mandate, they would say “S.A.” which today seems an amusing constraint. This post is dedicated to those early Disney girls with S.A. No more passing off Mickey Mouse with a bow, skirt and pasted eyelashes and calling him Minnie!

The interesting thing about studying Disney animation is that the Disney Studios were pioneers and one can watch the evolution of that medium. Early attempts did manage to make their lead female characters pretty, but not especially alluring. Probably the first characters to fit this description were the centaurettes from Fantasia (1940). They are fantasy creatures but some attempt was made to make them look “right”. Here is a page with a few concept designs. 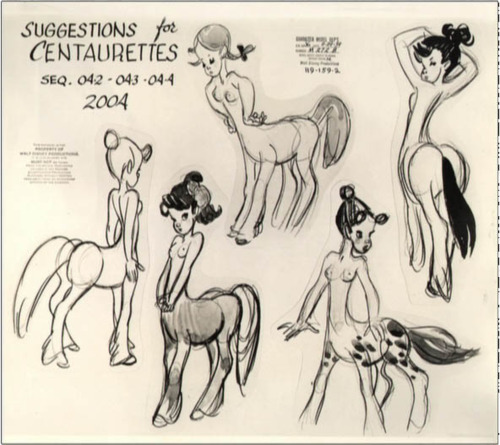 After Disney approved the concepts, the animators would make a more fine-tuned sketch that showed the final appearance of the character. Since this will be used to produce the final animation, the placement of the dark lines is very deliberate. 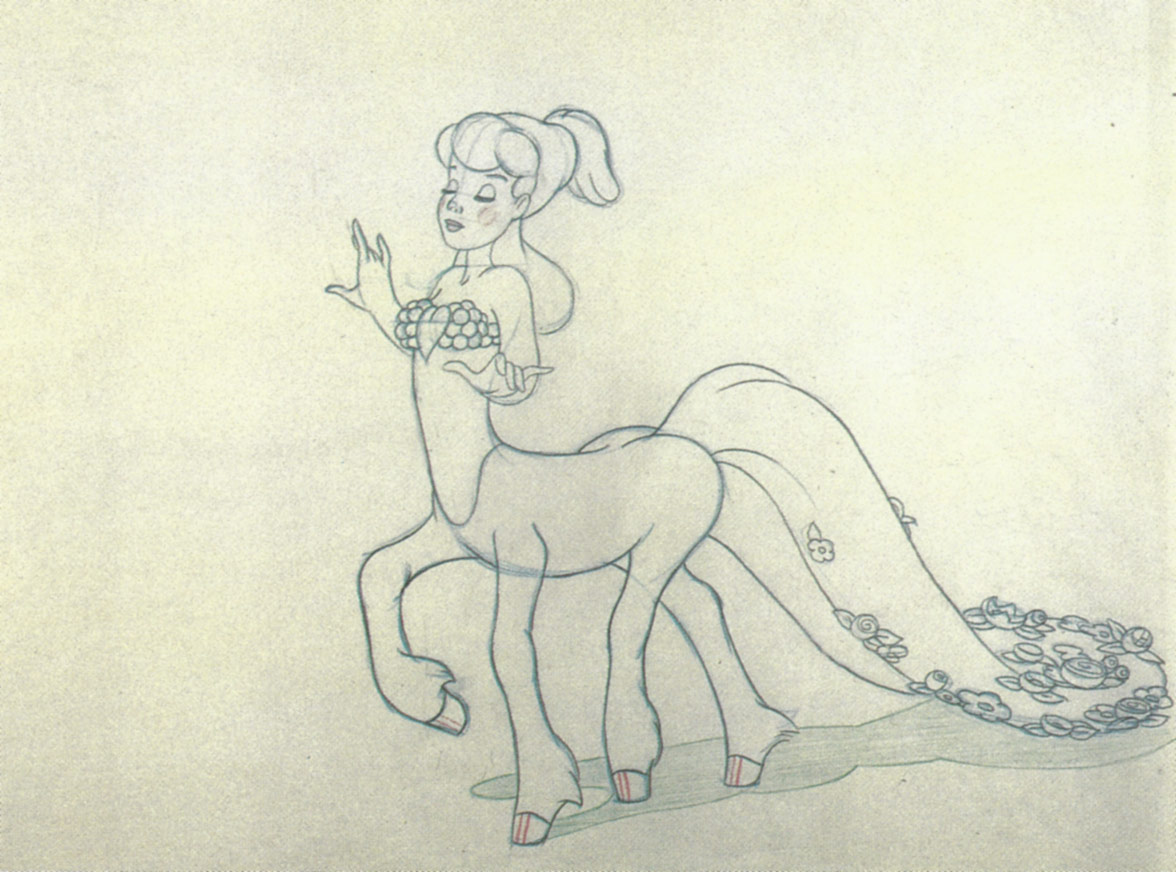 Then there are animators who draw the final cleaned-up sketch, in-betweeners who draw the intermediate motions of the characters and a team of women who color the cells.

Edit: For a comprehensive list of the artists who worked on ‘The Rite of Spring’ segment of Fantasia, please refer to this page. – Pip 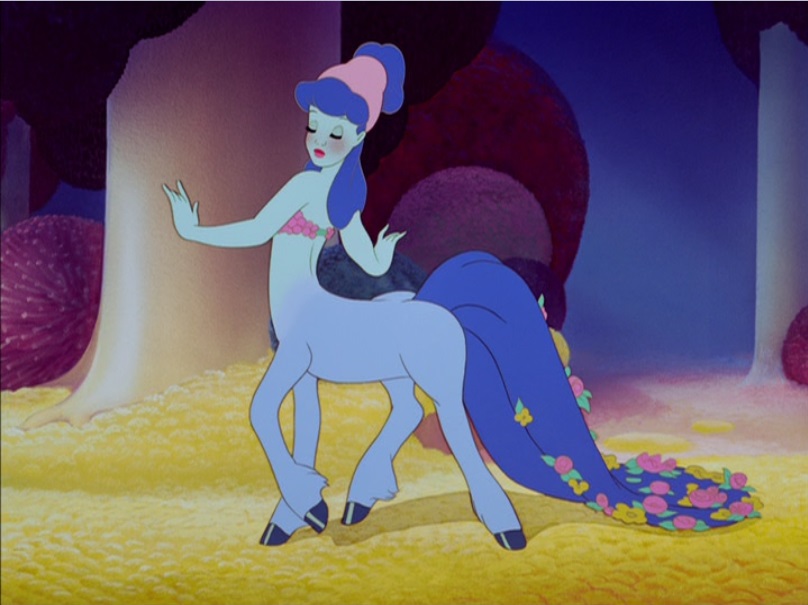 I was surprised at the popularity of this iconic pose and this creature is now a figurine. 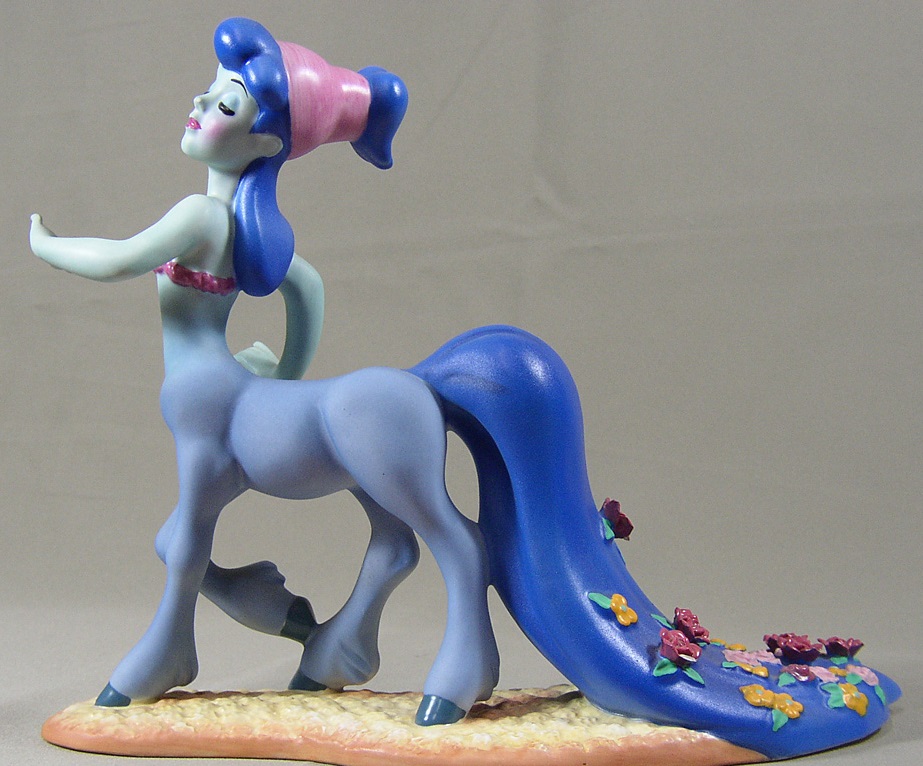 Part of the fun of the early Disney work is the little bits of “business” he has each character do and there are a lot of recurring gags and play on stereotypes that are amusing to an adult audience. One of Disney’s other early mandates is that his characters have distinct personalities. After the centaurettes groom themselves, they get all worked up about the boys coming for a visit so they can all frolick together, but one poor centaurette is without a match until she is discovered by one of the remaining boys. 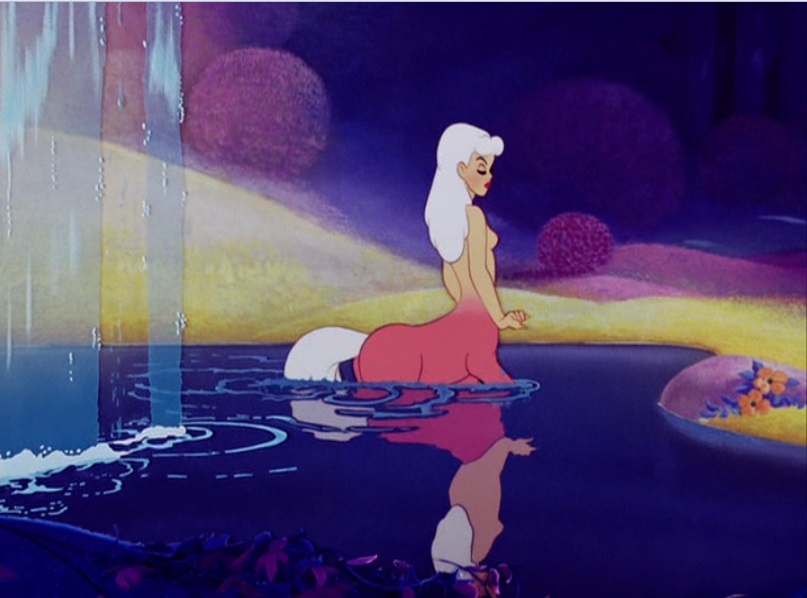 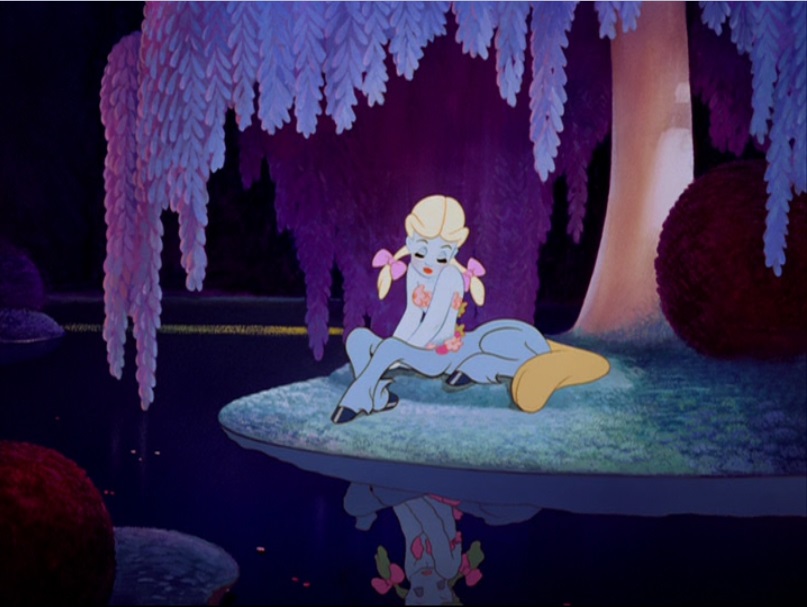 There are even zebra centaurettes accompanying a Dionysian character—all of this to the music of Beethoven’s 6th “Pastoral” Symphony. 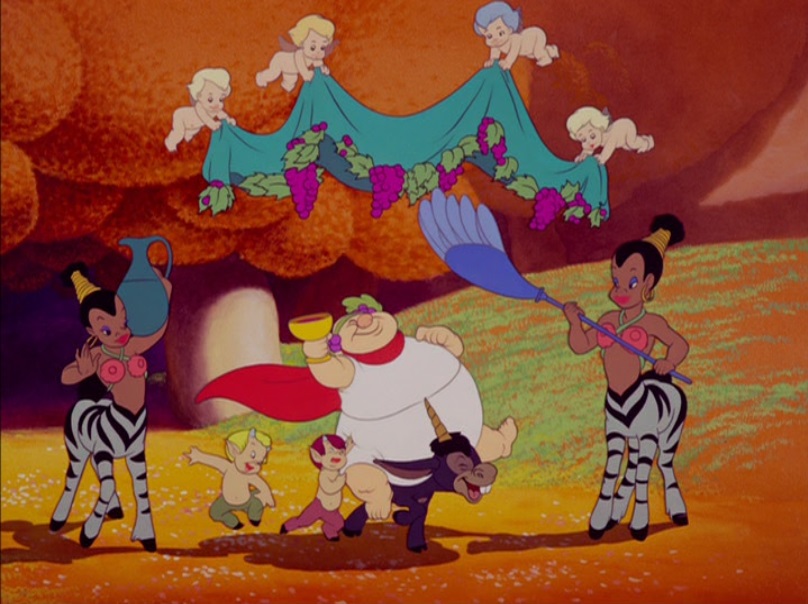 Animators may have been talented artists, but that did not mean they were well-educated on anatomy. About the time of the release of Fantasia, Disney had animals brought in as models for them to study and the first film to show this off was Bambi (1942). From then on, even female animal characters had a certain feminine allure: Bambi’s mother and Faline (Bambi), Lady (Lady and the Tramp (1955)) and Perdita (101 Dalmatians (1961)).

Once the ancient Greeks learned to make large statues from the Egyptians, they then pushed for anatomical perfection. The 1950s were an analogous time for the Disney Studios by which time they routinely accomplished this level of believability. Also, until then, any female leads were young women, not really girls, so we see our first two examples voiced by the same girl, Kathryn Beaumont. 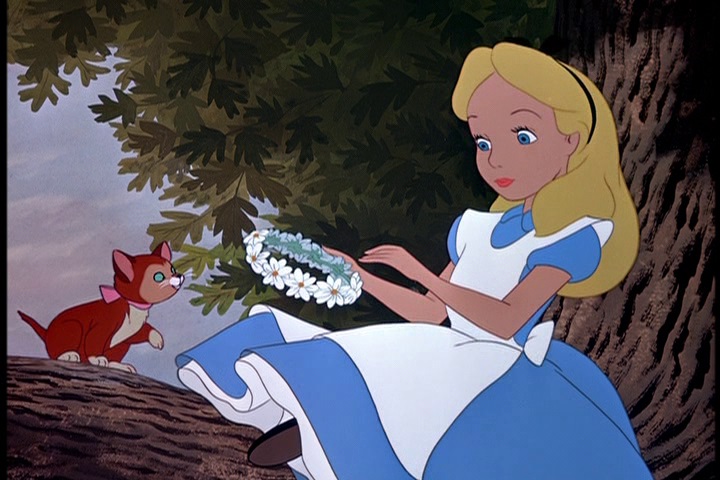 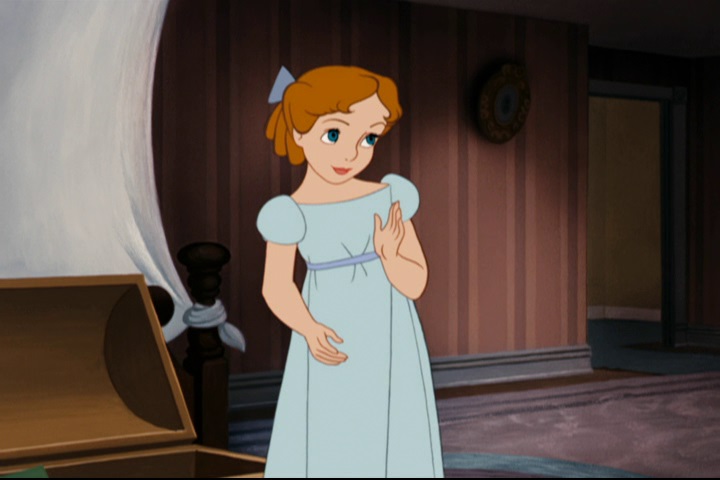 Of course in Peter Pan we also get Tinkerbell, the quintessential animated sex pot who creates some mischief because she is jealous about all the attention Peter is giving Wendy. 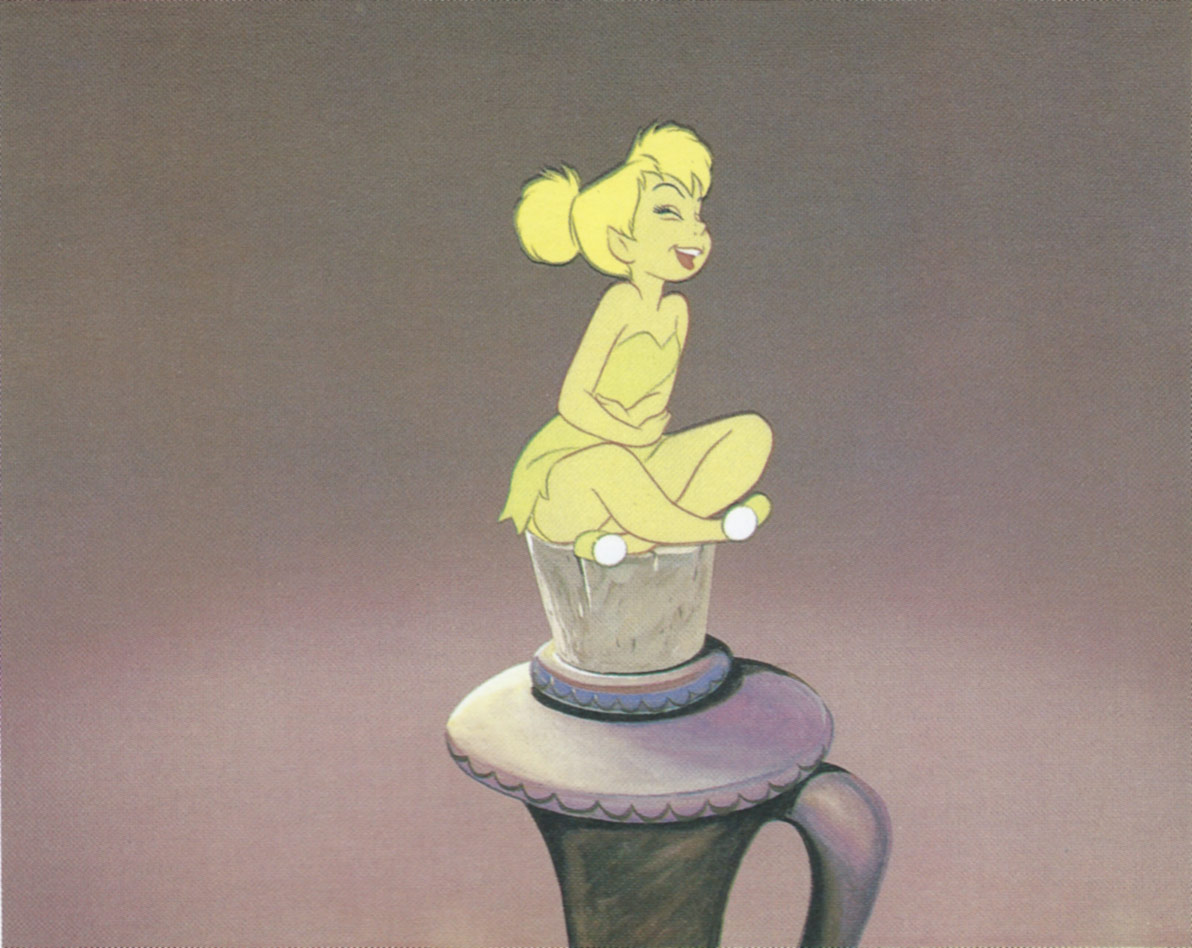 After artists become accustomed to producing anatomical accuracy, they want to play with the forms and so in the late 1950s and 1960s we begin to see an angular style in Sleeping Beauty (1957), 101 Dalmatians and Jungle Book (1967) which was in production when Walt Disney died. 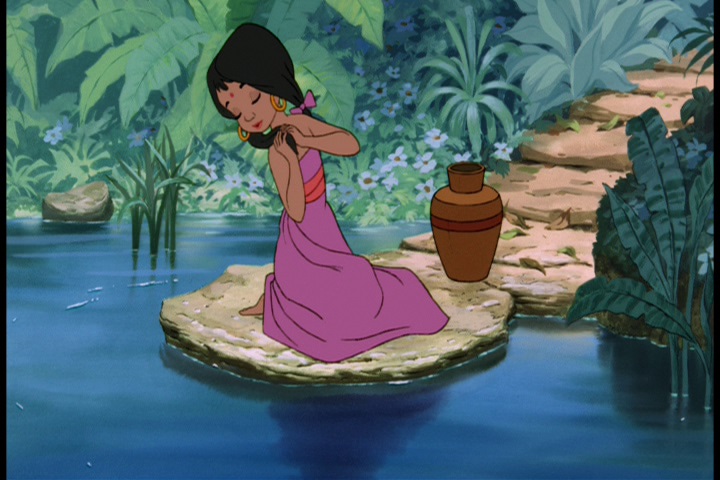 After that, there was a period when the studios attempted to anticipate Disney’s wishes: The ArtistoCats (1970) and Robin Hood (1973) were in the concept stages. Once business interests got control of the studio—changing the name to The Disney Company—animated features were produced more rapidly, but with a more formulaic system that established schedules and deadlines.