A traditional craft in some parts of Germany and in neighboring regions such as Alsace is the making of dolls whose head, neck, forearms and lower legs are in porcelain. Often their facial features are painted by hand, and nice dolls have their eyes in painted glass, with eyelashes attached to the eyelids. The rest of the body, being covered by clothes, usually consists of padded tissue.

Dolls can be found in various styles. Some resemble young women and look a bit like Barbie, while others represent babies or toddlers. But the classical model is the “romantic” doll, a 9-year-old girl dressed in Victorian style with a robe going down just under the knees, bloomers covering the legs and high laced boots; they generally have long hair, often with plaits. The price varies according to size and quality, but you can count 150€ (about $159 US) for a good quality 60cm doll.

In order to make them stand upright, one fastens around their waist a metallic holder attached to a wooden base. Under the base of the ones I have, there is a warning label:

Purely decorative item. Not suitable as a toy for children!

Indeed, porcelain dolls are a gift for adults, not for children. Adult fans will collect them, cherishing and admiring each one.

I will present here photographs of my dolls as they stand in their “natural environment” inside my apartment. I start with one that I bought second-hand in a flea market in Brussels at the end of the eighties. It is not particularly beautiful, her eyes are just painted, but her pale lunar appearance imparts to her some mystery and for a long time I fancied her having magical powers. She sits next to my CDs and DVDs. 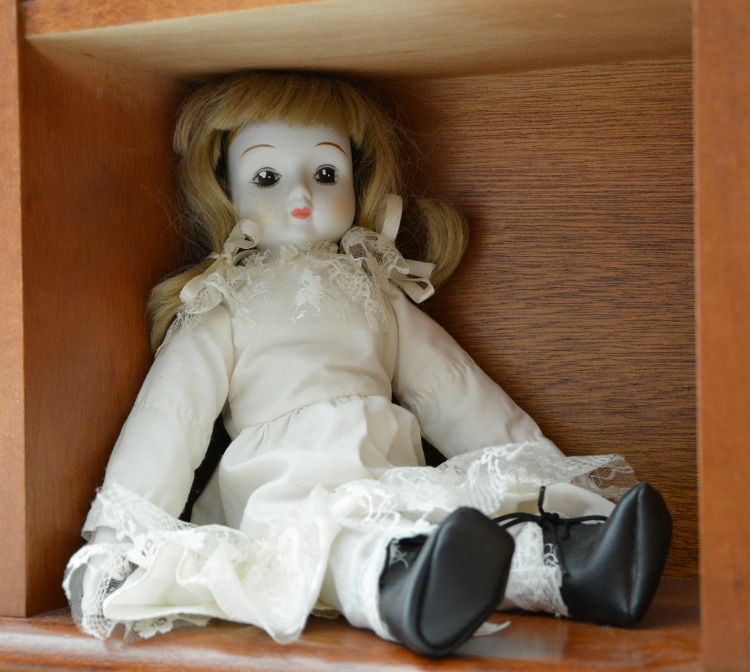 I have another old doll of a similar style, which I bought last year in a second-hand shop in Strasbourg. She reminded me that a second-hand doll is sometimes like a neglected child, left alone in a dusty place, who needs care. To make her pretty again, I had to wash her robe and bloomers, brush her face and hands with a soap-covered toothbrush, shampoo her hair then untangle them individually (a comb is too hard). Now she sits as a shy girl in an old chair on a small table next to a big dresser. 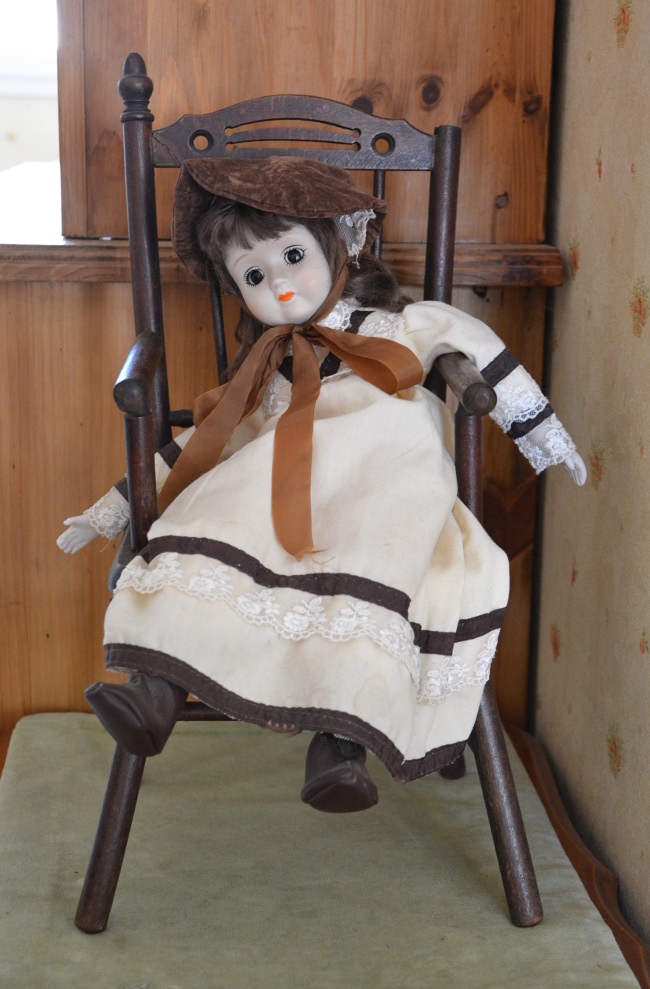 My other dolls were new ones bought in a souvenir shop. I show first the “twins”. I bought them the same day, they are the same size (32cm) and they stand facing each other in a showcase. I like the quite modern pink clothes of the second one; they give her a very sensual look. 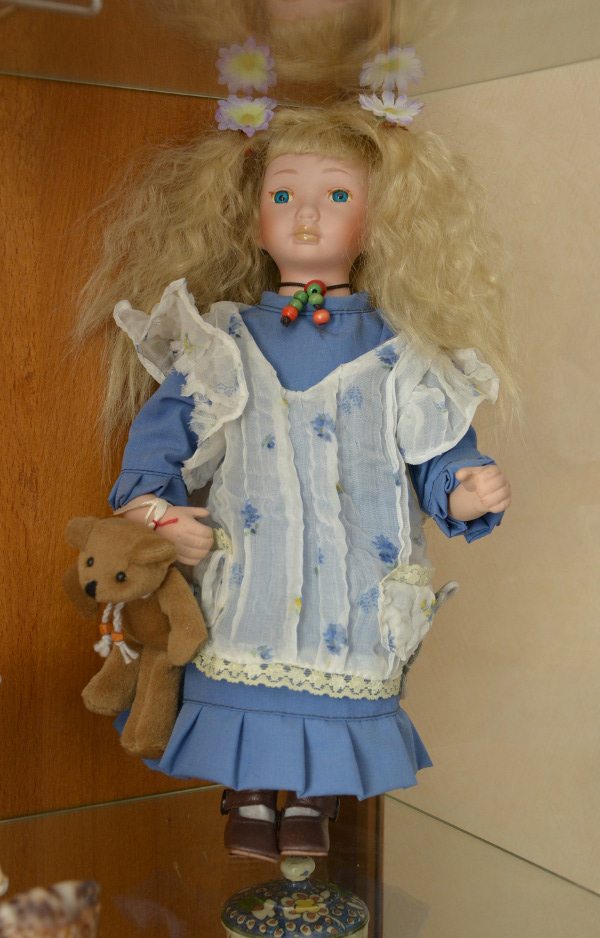 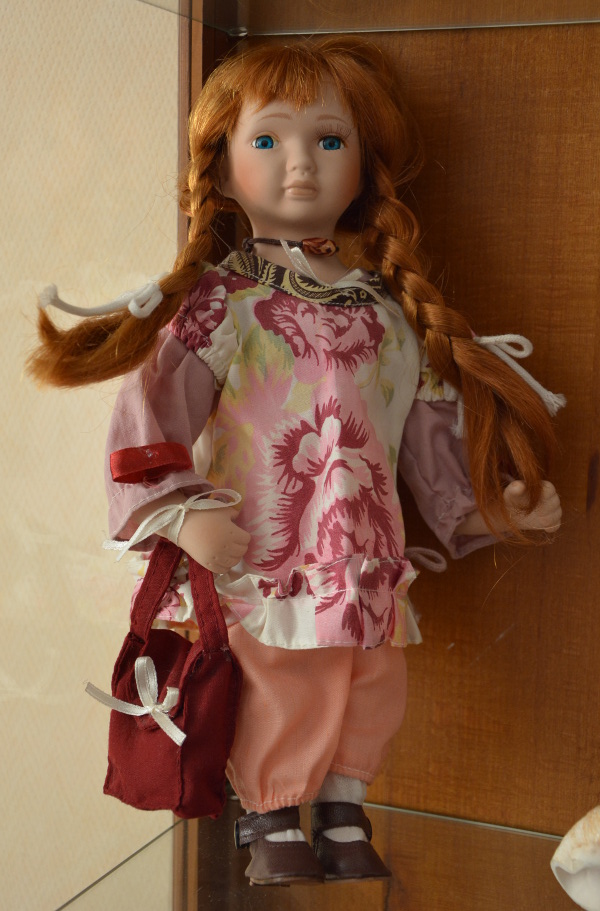 The next one (40cm without the hat), my latest acquisition, is special because her face looks more like that of a 5-year-old. 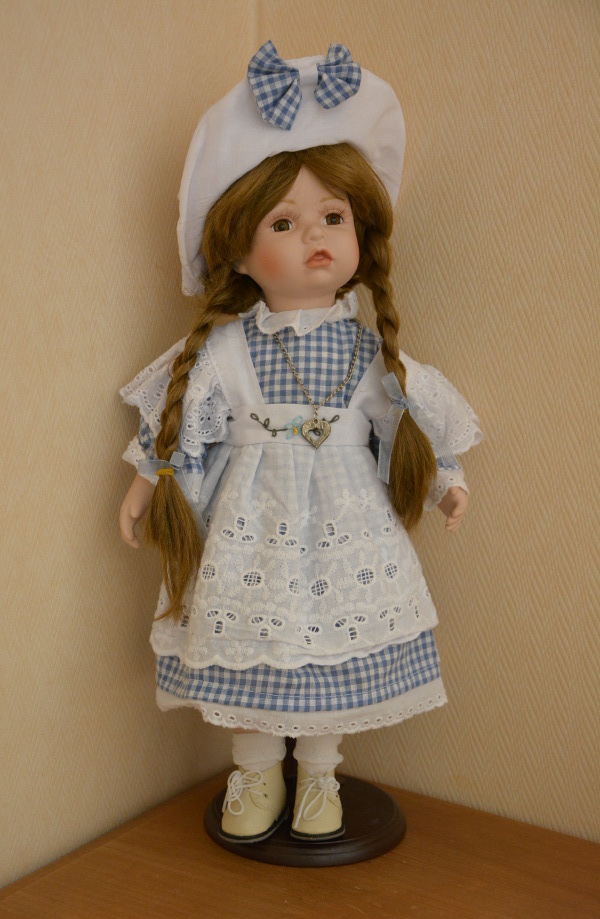 My sixth doll (42cm without the cap), standing over my writing desk, has quite rustic clothes but her deep eyes captivate me sometimes. 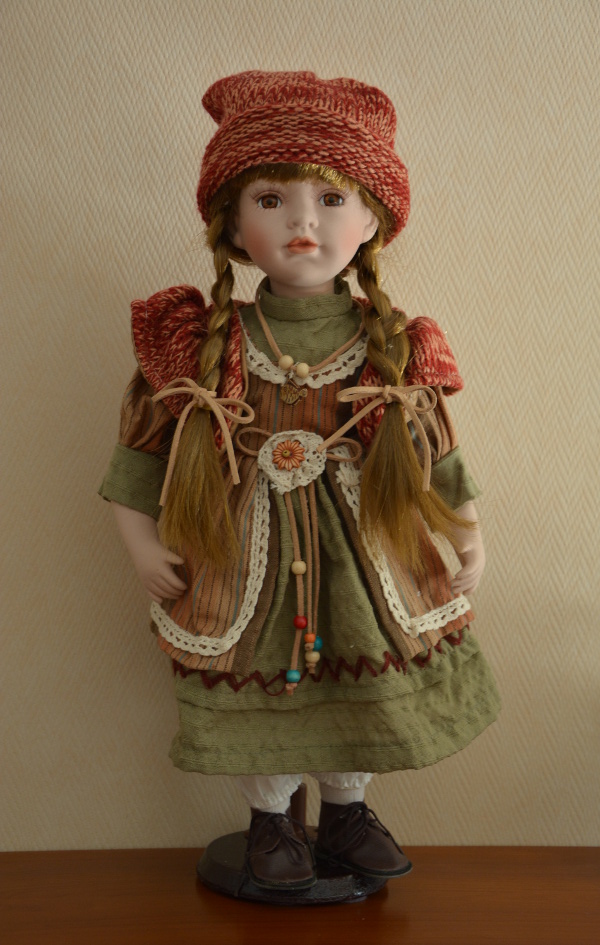 The next one (49cm without the hat) is in my bedroom. Look into her eyes; she seems so serious! 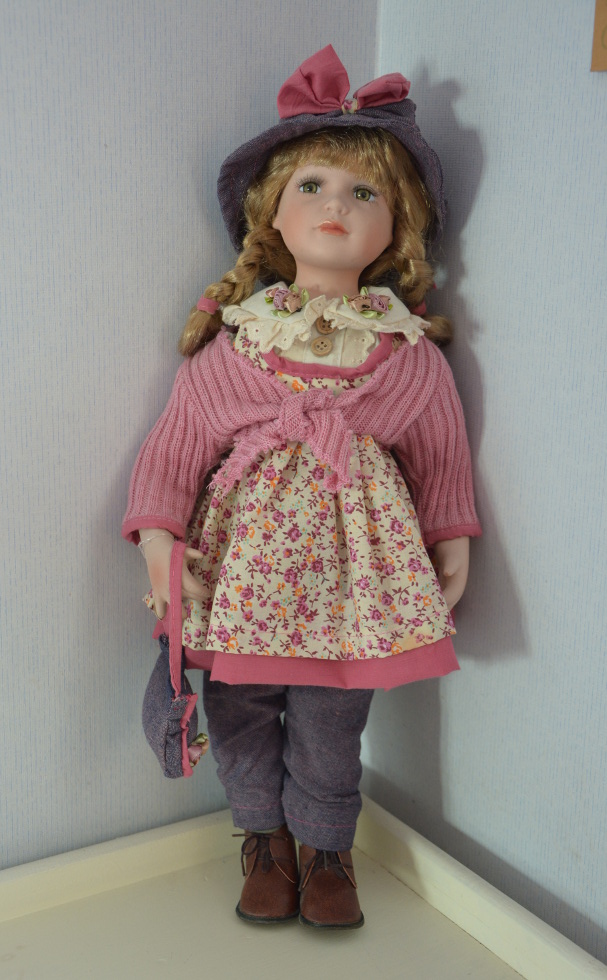 I end with my two big ones. First a gorgeous redhead (58cm without the hat) with a beautiful robe covered with flowers; as it fits, she stands over a marble table. 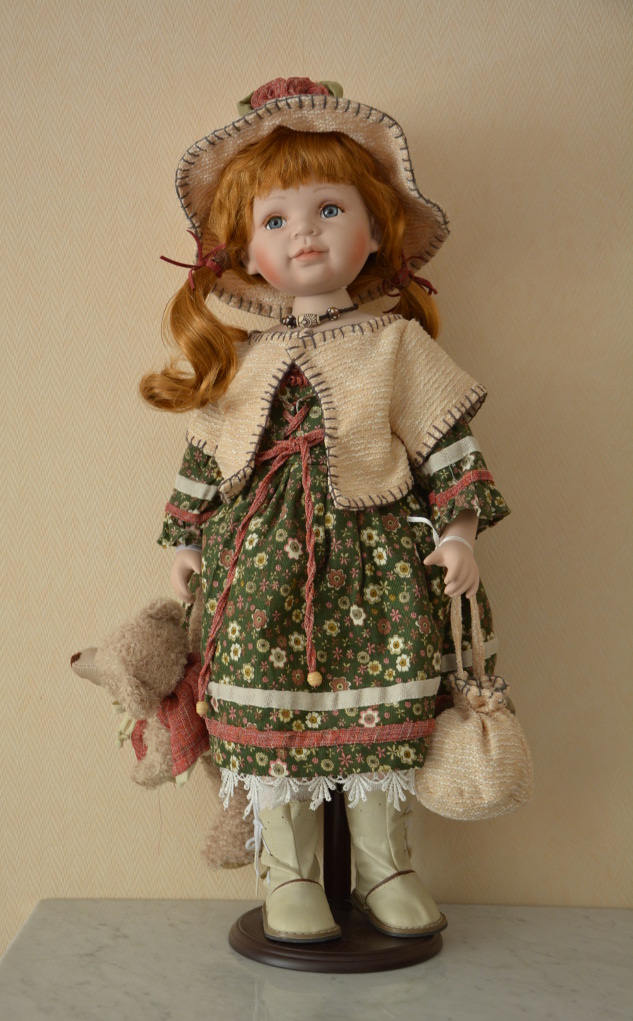 And now for my biggest and favorite (60cm). Her grey clothes are modest, but her face and smile ravish me, especially with her head slightly tilted to the right. Her hairstyle is very original, she has short hair overall, with two long plaits on each side; notice also the long side-locks in front of her ears, exactly like the “payot” worn by orthodox Jewish men and boys. She stands next to my computer and guards me when I am communicating or blogging through the Internet. 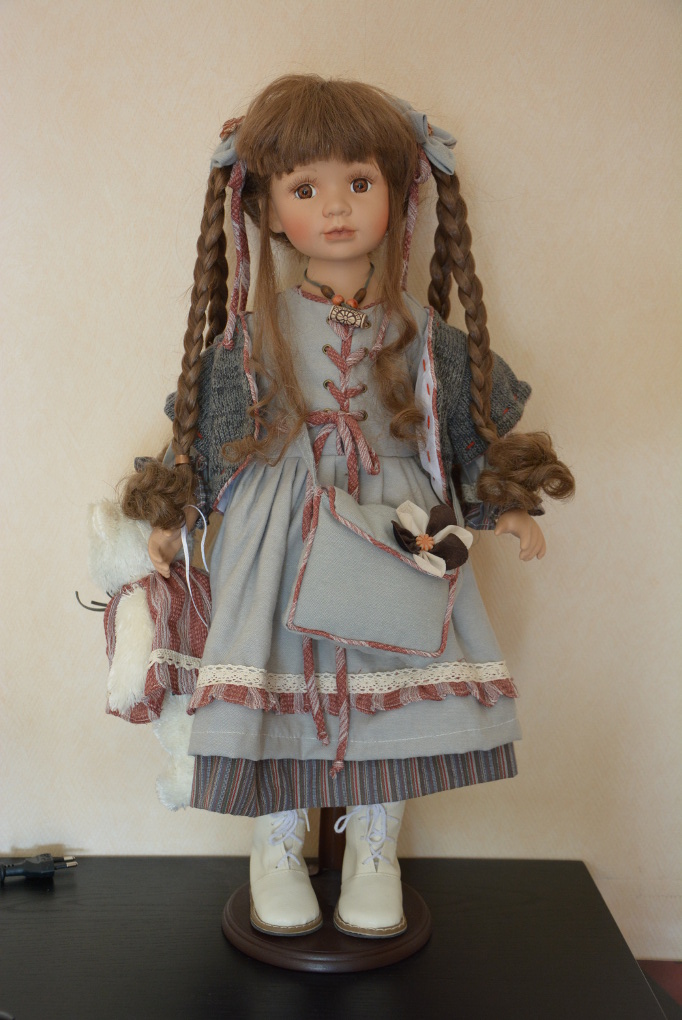 Here is a close-up of her beautiful face. 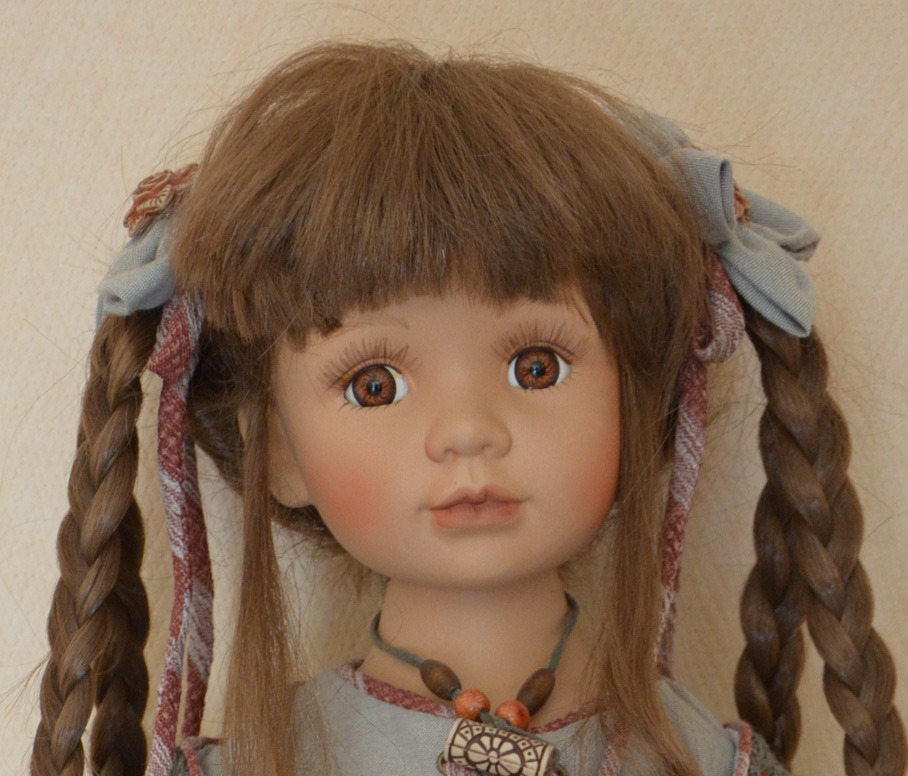 Collecting dolls requires patience. Often one finds some whose face or smile is not engaging, or whose hands look crooked. A careful examination, especially of the porcelain parts, is necessary before purchasing it.