Brothers Jake and Dinos Chapman began working collaboratively in the very early 1990s.  Their work then, as now, featured mannequins in dark and provocative scenes.  A number of their installations seem to deal with the subject of girls, despite denial by the artists.  The Chapman brothers’ art deals with some heavy ideas and during interviews they quote readily from Kant, Hegel, Nietzsche, Wittgenstein and Deleuze.  Jake has discussed being strongly influenced by Georges Bataille’s On Nietzsche, Tears of Eros, and Documents magazine.

Nietzsche had opined in Birth of Tragedy that art redeems life from the terrible truth that existence is a horror.  With the Chapman brothers’ art, this appears to be in a way reversed: something good and beautiful in reality is perverted by art into the horrible. 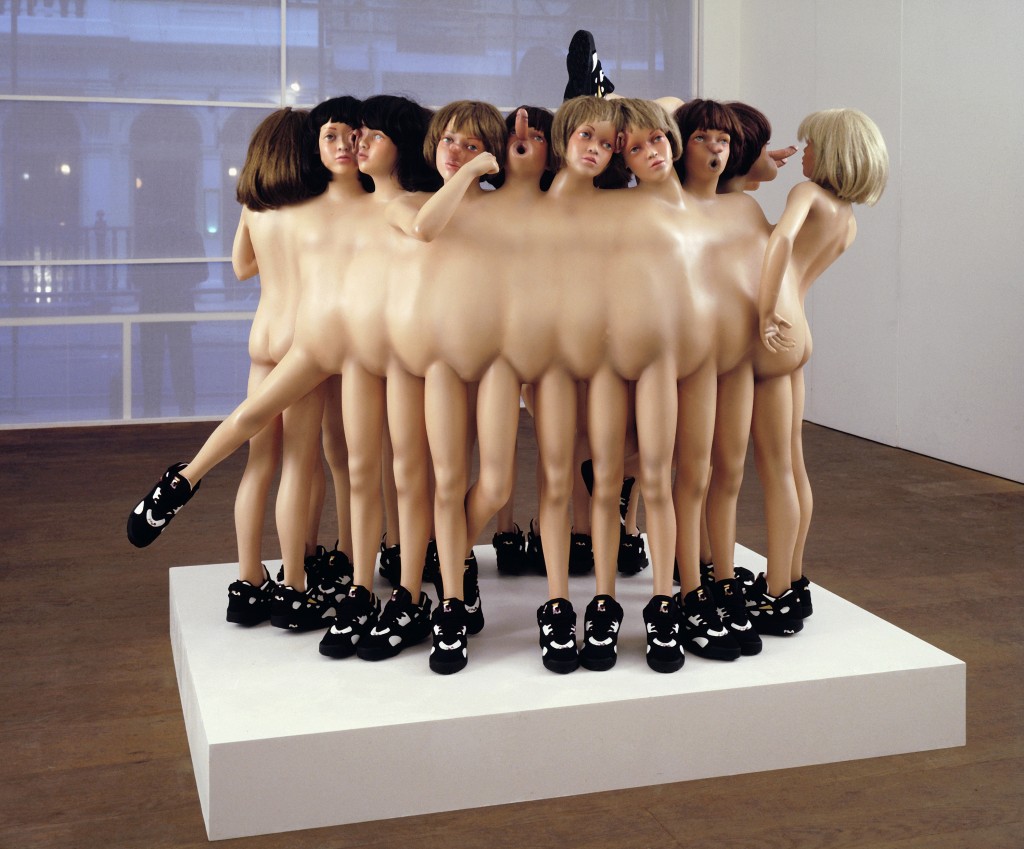 “There’s nothing we’ve done here that can rival the darkness of the imaginations of children. They aren’t the innocents that adults want them to be.” – Jake Chapman

The brothers’ alleged aim is to incite political dialogue through provocation, while at the same time acknowledging that transgressing boundaries in modern art is no longer possible.  (Jake Chapman on Georges Bataille: an Interview with Simon Baker.)

A number of critics speculated that Zygotic Acceleration (1995) or Tragic Anatomies (1996) were about the danger of the sexualization of girls: penises and vaginas attached to the faces of the girls and so on.  Despite the death of the author, the brothers nonetheless interjected in the discussion and denied that this is what their collections were about—perhaps sensing that that would truly have been a provocative topic and preferring to stay in the safe-zone of traditional patriarchal politics and sexual discourse as in Sex (2009), which is a scene of torture, or Death (2003) which is a pair of cheap sex dolls cast in bronze.  The brothers go so far as to claim that the life size models are not even girls.

“For example, a journalist said to us, ‘How can you dare do these things to small girls?’ So you think, well, hold on a minute, let’s just take that question apart – why is it a girl? So the journalist replies and says, ‘Well it’s got long hair and freckles.’ OK. When Jake was a little child he had long hair and freckles, does that mean that he was a girl then and now, miraculously, he’s turned into a man because he’s got short hair and his freckles have gone? He says, ‘No, no, you know what I mean.’ We’re like, no, we actually don’t know what you mean. You’re applying rules to something that they don’t actually apply to. This thing is inanimate, it’s made from resin and paint. It bears 90% relationship to a mannequin, and maybe less than 10% to things that you can buy in Ann Summers [a chain of sex-toy shops]. There’s no point at which you can say this is a child. It might look like a child from the back, but from the front it doesn’t. And then the idea that something with an erect penis on its nose could ever be female is also another problem… It’s an attempt to force people to take into account their bad thinking. ‘Zygotic acceleration…,’ for example, it doesn’t work if you say it’s a child or it’s children; I’ve never seen 20 children fused together with adult genitalia on their faces. […] With the full title of that work, ‘Zygotic acceleration, biogenetic, de-sublimated libidinal model (enlarged x 1000),’ the final part tells you that this is not even a child-sized creature” (Jake & Dinos Chapman Interview, David Barett). 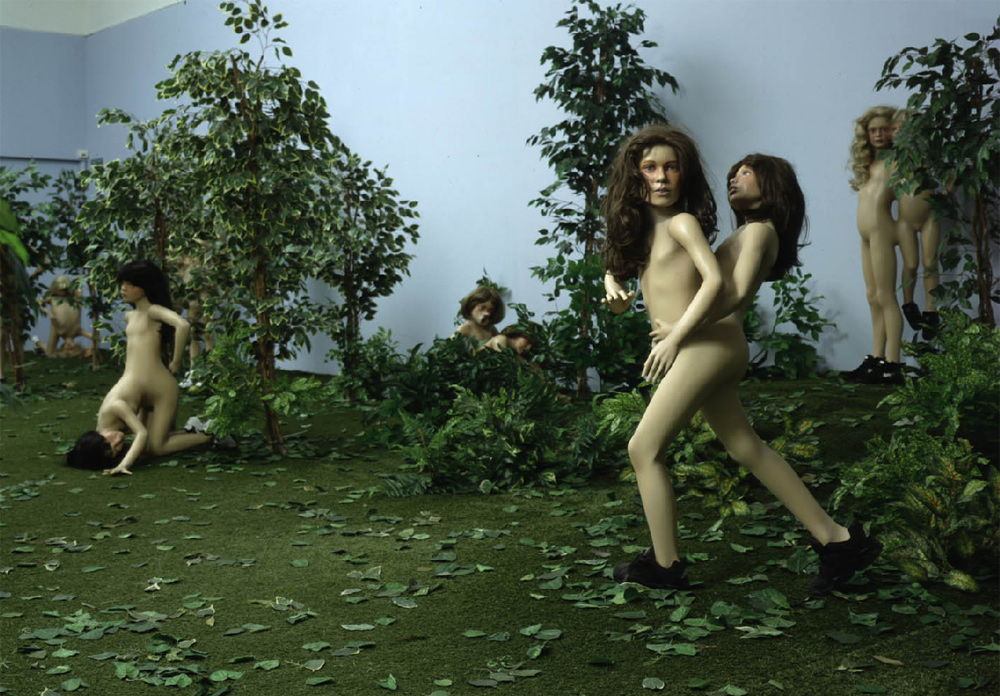 The Chapman brothers insist that Zygotic Acceleration or Tragic Anatomies are really about moral panic and this is expressed via the subject of genetic engineering (Press Release, Jake and Dinos Chapman: Explaining Christians to Dinosaurs).  Meanwhile, Jake and Dinos are aware that their works have gotten away from them, and Jake acknowledges that their Deleuzian-Guattarian collaboration could not have a single author, purpose or meaning (Jake Chapman on Georges Bataille: An Interview with Simon Baker).  And indeed, many critics recognized these girls as sexual.

“In relation to the mutant mannequins, we can also speak of the possibilities of a Bataille-like transgression that is closely tied to the experiences of sexuality and the overcoming of sexual taboos” (Press release, SLEPÝ VEDE SLEPÉHO). “Shocking, no doubt, the piece is also a discomfiting representation of the sexualisation of children, possibly registering either sexual abuse, sexual exploitation, or society’s fears about these crimes. Zygotic Acceleration, Biogenetic, De-Sublimated Libidinal Model (Enlarged x 1000) is first and foremost a stark way of confronting an audience with a tremendously unpleasant image, alluding to science fiction and medical research and so implicating an aesthetic genre and scientific research in the production of these problematic images; science fiction and scientific research are, respectively, aesthetic and intellectual domains where the horrible and the unsettling become possibilities. Any audience is welcome to view this piece to consider what it says about childhood and sexuality in modern society, providing the audience is willing to see past the piece’s antagonistic visual pun on “in your face” art. […] They usurp childhood innocence with these grotesque hypersexualized plastic replicas, part fashion (mannequins, the signifying sneakers), part “biogenetic” and very disturbing” (John A. Walker and Sarah Chaplin. Visual Culture: An Introduction).

By denying the child sexuality implicit in their work, the Chapman brothers can maintain an artistic respectability and have shows at the Tate gallery, while other artists who have broached the subject of child sexuality and the sexuality of girls have had this possibility taken from them.  The following critic for instance observes how the hideous art of the Chapman brothers maintains its aesthetic value, while by contrast, the beautiful sexualized girls of Graham Ovenden must be bereft of significant value.

“There are a number of contemporary artists who work with controversial imagery, images that when compared to the work of Ovenden (before his conviction), appear much more graphic and overtly perverse. What is it that makes such an extreme form of art no longer suggestive of a lack of moral value? How is it possible that the image of a nude child by Ovenden is worse than a sculpture that at a glance, appears to depict several? Could it be that the extreme nature of works by artists such as Jake and Dinos Chapman cause us to no longer associate their work with the human condition, as their work appears so non-human, so detached from our own reality. Their 1995 work Zygotic Acceleration, Biogenetic, De-Sublimated Libidinal Model (Enlarged x 1000) is often misread as the sculpture appears to depict nude, gender neutral children with facial deformations resembling genitalia. It appears particularly grotesque, a sort of macabre reoccurring joke between the two brothers‟ works. […] Zygotic Acceleration, Biogenetic, De-Sublimated Libidinal Model (Enlarged x 1000) has a higher value than say an image by Ovenden, as it is not about what you see initially, aesthetically, it is how what you see makes you feel; thus making it a better work of art in comparison. The higher the moral value, the higher the artistic integrity, the higher the merit of the artist and the better the work of art. […] In the past, there have been many instances where art has been deemed immoral and unfit for display, where it was put away, hidden from public view or completely destroyed. […] They were decisions made solely on what a group of people thought was either good or bad art. Questioning the moral value of art and the integrity of the artists who created it was in part responsible for the events that took place during World War II. The Nazis began to make their way into all levels of German society” (Tiffany Horan, Does Art Have Moral Value, and If so, Is Such Value Relevant to Its Assessment as Art?)

Another of the Chapman brothers’ projects that involved the defacing of girls was advertized to the public recently with this quote: 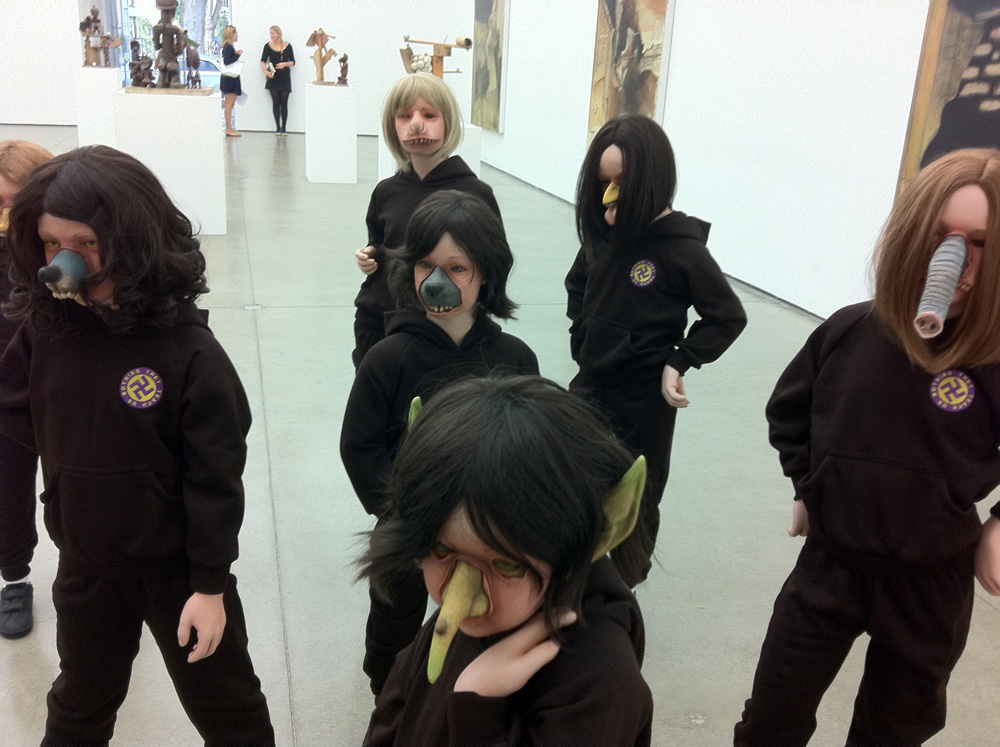 One of the brothers’ installations was at one location, while the other brother showed at a different site, and it was left open as to who created which.  One visitor described the girls as follows:

“The Minderwertigkinder – inferior children (NTS) –  are dressed in black, hoods on, and their back are turned to the entrance. They face One Rabbit Contemplating the Moon (2011) a grimy painting of an extasied cartoon’ish rabbit. The middle of each children’s face is tore apart where a snout, a beak, a trunk bulges out as if in the process of a collective shapeshift. A swastika circled by the message ‘They Teach Us Nothing’ is printed on their jumper – one you can purchase at the entrance.  Up a flight of stairs, one of the Minderwertigkinder – mouse child sits on the ledge of the first floor window. It seems impossible to escape from debilitating dream” (Part #1, Hoxton Square, Jake?) 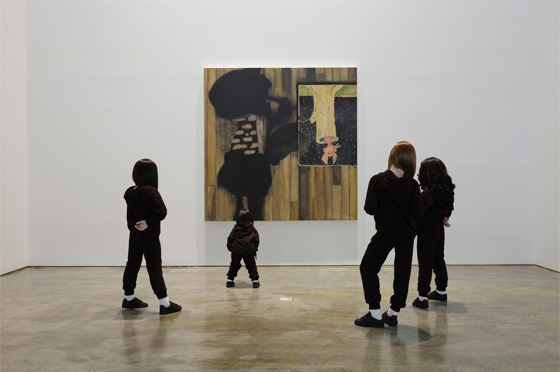 The animal feature is described variously as rupturing from the face of the girl or metamorphosing.  Some commentators saw a connection to fairy tales or horror films.  As with the 90s works, is there some redeeming interpretation possible alluding to the Deleuzian-Guattarian “becoming-girl”?  While the Chapmans reject any teleological interpretations of their work, their girl mannequin series might still be read not as an insult to or desecration of the girl, but as an evolutionary pathway through and even the transcendence of girls, who are never static but always in a state of becoming.

“[G]irls do not belong to an age group, sex, order, or kingdom: they slip in everywhere, between orders, acts, ages, sexes; they produce in molecular sexes on the line of flight in relation to the dualism machines they cross right through. […] The girl is like the block of becoming that remains contemporaneous to each opposable term, man, woman, child, adult. It is not the girl who becomes a woman; it is becoming-woman that produces the universal girl. […] The girl and the child do not become; it is becoming itself that is a child or a girl. The child does not become an adult any more than the girl becomes a woman; the girl is the becoming-woman of each sex, just as the child is the becoming-young of every age. […] It is Age itself that is a becoming-child, just as Sexuality, any sexuality, is a becoming-woman, in other words, a girl” (Deleuze and Guattari, A Thousand Plateaus).

The complete works of Jake and Dinos Chapman can be found at this link.