In a passing conversation, I got a tip that there was a photograph attributed to Lewis Carroll (Charles Dodgson) that had been floating around since at least the 1970s. It is purported to be a photograph of Lorina Liddell, the eldest of the Liddell children with whom Dodgson spent a lot of time and took photographs. When I looked into it, I realized this was not an off-hand remark. BBC2 had just aired a documentary entitled The Secret World of Lewis Carroll on January 31st in celebration of the 150th anniversary of the publication of Alice’s Adventures in Wonderland. Hosted by Martha Kearney, the film mostly honors the literary achievement of this artist, but in a bizarre twist, the producers claimed a last minute discovery of a photograph suggesting a more sinister interest in children by Dodgson.

I was told that the image could be found on the internet, however I was only able to find this very small one. I would appreciate someone coming forward with a better copy. Two or three versions of this reproduction were available.

Such a “discovery” is undoubtedly an irresistible bit of sensationalism for filmmakers and would inevitably, and quite incongruously, be included. Taking into account the overall structure of the film, it really seemed tacked on. Anyone who is an expert on the photographic work of Dodgson would recognize this as a forgery (or misidentified) and Edward Wakeling and many others have said so. The real mystery in my mind is why it was produced in the first place. Was it a forgery to discredit Dodgson? Was it a lark by another photographer who noticed the resemblance between a model and the real Lorina Liddell? Or were the identifying marks on the back just a guess by some art dealer who thought he recognized the model and period?

Before delving into historical, psychological and personality issues, it is important to notice that the producers focused only on the forensic evidence and only fleetingly mentioned that real experts on the man considered it a fake. After being in a private gallery in the Paris area, the image was inherited by Musée Cantini in Marseilles. That is where it was subjected to tests by Nicholas Burnett. According to him, the paper stock, albumen residue and probable type of camera—requiring a wet collodion process—was consistent with it having been produced when Lorina was a young teen. He also commented that the mold damage was consistent with that age and would have been difficult to fake. David Anley subjected it to further analysis in the hopes of determining if the model could have been Lorina. After some equivocation by both experts, they each admitted leaning toward the conclusion that the photo was genuine. Particularly disturbing about this is that in a court of law, such experts’ conclusions are compelling testimony in convicting defendants. 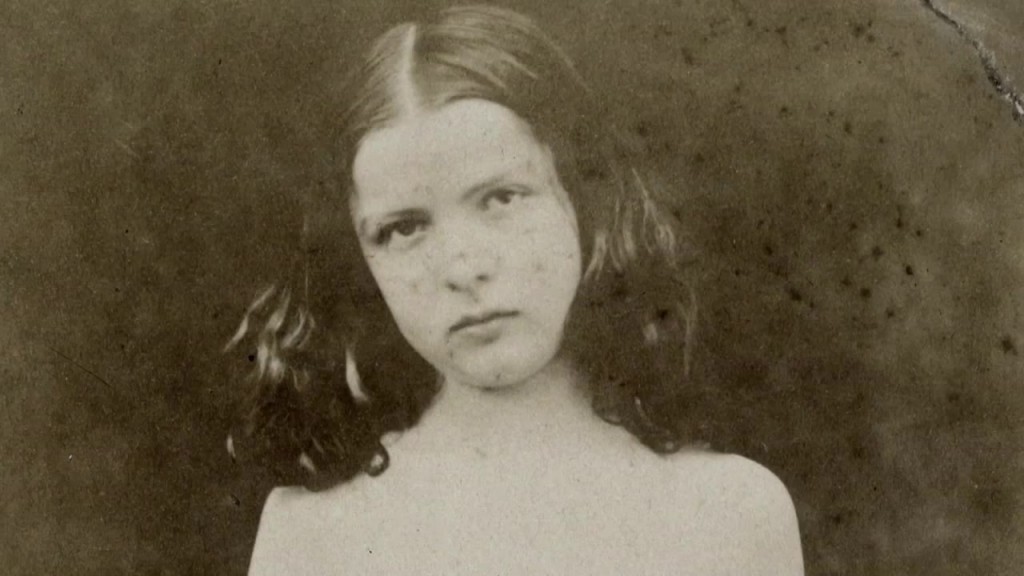 This seems to have offered the tantalizing possibility that Dodgson was a repressed pedophile. Given his status as a member of the clergy, repressed is certainly an accurate adjective, but the problem with the term pedophile is that it is far from satisfactorily defined. Kenneth Clark noted that institutional authorities hate dictionaries and encyclopedias because they clearly define things and powerful people and institutions need an environment of ambiguity to thrive. For the purposes of this essay—and the proper definition in my mind—I am defining it as the selfish exploitation (in person) of a child for sexual gratification—and presumably having some deleterious effect on the child’s mental and/or physical well-being. By that definition, Dodgson was certainly not a pedophile and it is unfortunate that his nieces, probably out of a sense of propriety, saw fit to remove pages from his diaries that may have offered clues to his thoughts and mental state.

He often scolded himself for deviations from his personal standard of honor. Being a clergyman, it is likely that these “failings” had at least some sexual component. Although I could personally relate to the man in most ways, we do diverge on the point of sexual repression. I don’t mean to validate Freudian theory, but the sex drive is a powerful force and cannot be dismissed easily. In fact, it was the Catholic Church’s political maneuver to have its priests and bishops be celibate that was key to centuries of sexual misconduct and abuse of children by these celibates. The other factor—given the doctrine of original sin—is the appalling lack of education priests get about the realities of human sexuality. The propensity for this behavior in this demographic is remarkable considering how rare sexual child abuse generally is. The documentary notes that Dodgson did take a similar oath and would, at the very least, have been confused by his own impulses. Despite protestations to the contrary, thought and action do not amount to the same thing. And regardless of whatever confusing distractions he may have experienced, there can be no doubt that his regard for children was worshipful. This would have been consistent with Rousseau’s philosophy that children represented a state of grace that would be corrupted only as they grew up.

The biggest error made by the amateur historian is not accounting for how the context of behavior changes over time and in different cultures. I am constantly (almost ad nauseum) reminded by colleagues of this when analyzing the actions of people living in the Victorian Era or the Hippie Generation. Even if there can be some objective humanist standard of ethical behavior, it is far from easy to disentangle oneself from the biases of one’s own culture. Most people are not even aware of the effect that their culture’s propaganda has on them personally. When taking this all into account, it behooves us to regard Dodgson’s quirks with a compassionate eye and commend him for his personal and public accomplishments and the way he enriched the lives of his child friends, despite the constraints of his society.

With all due respect to academic experts, I am not privy to the sound bites we are supposed to use when discussing the personal lives of celebrities. In the case of Dodgson, I see very little that reflects a deep understanding of his relationship with children. I am peridocially reminded how certain people have an excellent rapport with children; the Kye Tanson post is a recent case in point. The remarkable thing about such people is not so much that they do not fit into adult society which is often a dreadful bore, but because children are treated with respect as real human beings in their own right, these children would naturally gravitate toward such adults, expressing a remarkable confidence. One should not underestimate the capacity of little girls to pursue—perhaps for largely selfish reasons—these relationships and ingratiate themselves to such providers of stories, games, boat rides, tea parties and doting attention. In the case of Alice Liddell, there is evidence that she had a kind of pushy personality that was nonetheless charming—demanding stories, presents and other favors. Acknowledgment of the personal agency of Alice is hardly mentioned in historical accounts. It is therefore conceivable (and I think, likely) that whether or not Alice was Dodgson’s favorite, he was certainly hers up to a certain age. The fact that these girls grow up and change their personalities and priorities was an ongoing source of distress for Dodgson and he would, half jokingly, plead for them not to grow any further. With regards to his personal interest in Lorina, let’s suppose that he had some airy romantic notions about her at one time, I believe if he had actually seen her as a naked young teen, he would have been somewhat revolted. The visual cues for sexual desire (principally pubic hair, breasts and fat deposition) are quite different from the kind of pristine beauty of a child’s body.

Finally, some thought should be given to the personality of people who genuinely enjoy spending time with children. For them, it is almost as if they were promised a magical transformation into adulthood that never happened and they remained eternally children. They are physically adult and have adult libidos, but they seem to have a stronger desire for engaging in non-competitive (sometimes nonsensical) play, an infectious enthusiasm for hobbies, less patience for social niceties and a somewhat refreshing bluntness that may seem odd coming out of an adult’s mouth. These people provide an invaluable service to the next generation and, when endowed with wit and intelligence, an immutable impact on culture as the tales of Alice did.

In the decades that followed Helmut Gernsheim’s rediscovery that the man known as Lewis Carroll was also a skilled photographer of children, Morton Norton Cohen—who appeared on the documentary—discovered that some nudes did still exist. And those scholars who were not rigorously versed in the peculiarities of Victorian culture inevitably applied their own cultural standards of decency. In a defensive reaction to the proposition that Dodgson might have had unhealthy relationships with his little subjects, other scholars may have overcompensated—even denying that Dodgson had any special affinity and bond with children. The result has been a polarization in Lewis Carroll scholarship that, although sensational in our time, is a cynical and irrelevant distraction from the real character of the artist and his contribution to society. This “Two Camps” phenomenon makes the artist—unable to defend himself—a political pawn of grandstanding academics. Scholarship should be used to illuminate the public about our society’s history, not a tool to gain public notoriety. Shame goes to those who, out of expediency, do sloppy research and cater to the lowest common denominator of mainstream culture. BBC2 has certainly come a long way from its landmark days of productions like the Civilisation series.

51 thoughts on “Sensationalism, the Two Camps and the Eternal Child”