Ernest Christopher Dowson (1867-1900) ranks among the best English poets of the last decade of the 19th century, but he remains little known outside a small circle of amateurs. He belonged to a group of young authors who thought of themselves as “the movement” or “the fin de siècle.” They appreciated “art for art’s sake” and viewed literature as a purely aesthetic activity, devoid of any moral or political message, expressing the inner personality of the author and to be appreciated only for its style. In poetry, they were influenced by French Symbolists, in particular Paul Verlaine for whom verses had to be like an incantation, where the musicality of the words matters more than the ideas that they carry. This view was in opposition to the canons of Victorian literature, where any work had to contain a denunciation of sin or injustice and implicitly call for moral or social reform. Hence this group of young writers earned from their detractors the label of “Decadents”.

Dowson’s poetry has a sparkling character, using repetitions of sounds, as in nursery rhymes: “Violets and leaves of vine / We gather and entwine” (A Coronal), or repeated groups of words, as in songs: “But the spring of the soul, the spring of the soul, / Cometh no more for you or for me. / … / But the flowers of the soul, the flowers of the soul, / For you and for me bloom never again.”  (In Spring). It relies also on the contrast obtained by putting together unrelated words: “They are not long, the days of wine and roses” (Vitae summa brevis spem nos vetat incohare longam), “I cried for madder music and for stronger wine” (Non sum qualis eram bonae sub regno Cynarae, the so-called Cynara poem). It contains also many elegant evocations of love and sensuality: “Let’s kiss when kissing pleases / And part when kisses pall” (To His Mistress).

Ernest Dowson contributed to modern culture in quite unexpected ways. He is credited with inventing the word “soccer”, although he spelled it “socca” or “socker” (The Letters of Ernest Dowson, no. 13 and no. 91). Margaret Mitchell’s 1936 novel Gone with the Wind owes its title to a sentence in Dowson’s Cynara poem: “I have forgot much, Cynara! gone with the wind / Flung roses, roses riotously with the throng”. This novel was adapted into a famous 1939 Hollywood film directed by Victor Fleming, starring Clark Gable and Vivien Leigh.

Ernest Dowson suffered from both bad health and shaky mood. As writes Desmond Flower in his Preface to New Letters from Ernest Dowson: “From his parents he inherited two destructive factors. From his mother a deep sense of depression … which caused her to commit suicide. From his father he inherited tuberculosis from which both of them died.” Indeed his father, whose health declined, died in 1894 of a drug overdose, but many suspected a suicide; then his mother took her own life in 1895. Years later his friend Conal O’Riordan wrote in a letter to Flower (see the Introduction to The Letters of Ernest Dowson): “I recall Ernest showing a photograph of his mother to me and I was moved to tears (being barely twenty-one at the time) by something extraordinarily pathetic in her charming face.” The following photograph taken in 1868 (scanned from The Letters of Ernest Dowson) shows the 9 month old Ernest on his mother’s lap, and one can see the deep sorrow in her eyes: 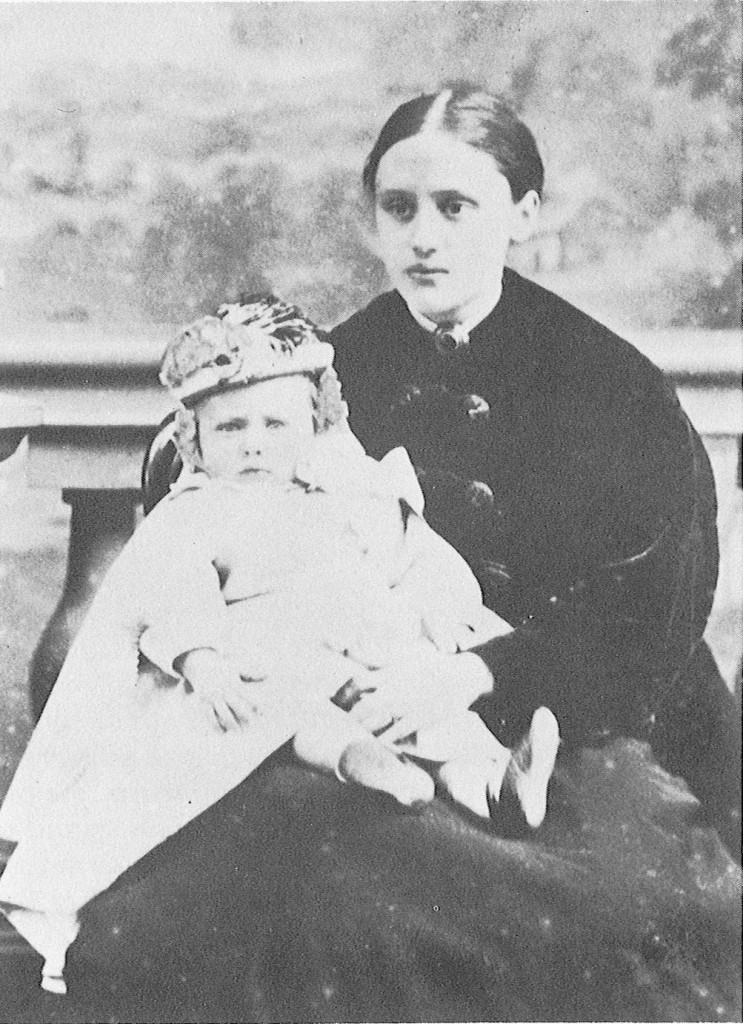 The legal proceedings for the inheritance of his parents took many years, so Ernest could not get his share of it. Although potentially a rich man, in reality he lived rather poorly and he died at age 32 from tuberculosis and neglect.

Now followers of Pigtails in Paint will be interested to learn that Dowson loved and worshipped little girls, and several of his poems center about girl love. He was, to repeat his own words about the lawyer William Clarke Hall (Letters, no. 115), “a charming person & properly a worshipper & devout follower of the most excellent cult of la Fillette.” (“la Fillette” means “the Little Girl” in French; Dowson spent a great deal of his childhood in France, thus he spoke French fluently.)

In 1889, Dowson worked in the family business, a dry dock on the river Thames located in a suburb of London. Once a little girl brought some joy in his tedious management work there (Letters, no. 5): “I have discovered an adorable child here, hailing from one of the three publics that surround us on either side—’which pleases me mightily’ as Pepys would say. It is astonishing how pretty & delicate the children of the proletariate are—when you consider their atrocious after-growth. Of course it is the same in all classes but the contrast is more glaring in Limehouse. This child hath 6 years & is my frequent visitor, especially since she has realised that my desk contains chocolates.”

After office hours he would work as sub-editor and dramatic critic for a moribund journal, The Critic; this position allowed him to get free tickets for any play showing and, as an avid theatre-goer, he took advantage of this opportunity. Thus he could admire child actresses on stage and he expressed his devotion for them in a peculiar way: by throwing chocolates at them. He seems to have corresponded with some of them, maybe with Mabel Vance (Letters, no. 16 and 153), but certainly with “Little Flossie”, a 9-year-old American actress billed as “the American marvel”, to whom he referred in his letters to Arthur Moore as “ma petite Californienne” (Letters, no. 1, 2, 5 and 17).

But his favourite child actress was Minnie Terry. Born in 1882, she belonged to the third generation of the famous Terry family of actors. As a devoted fan, Dowson watched all plays in which she acted, collected her photographs and various souvenirs about her. He nicknamed her “Mignon” (for her role in the play Bootle’s Baby), “la petite” or “la chère petite”. Below is a 1889 photograph of the 7-year-old Minnie, taken for The Theatre, available at the National Portrait Gallery. 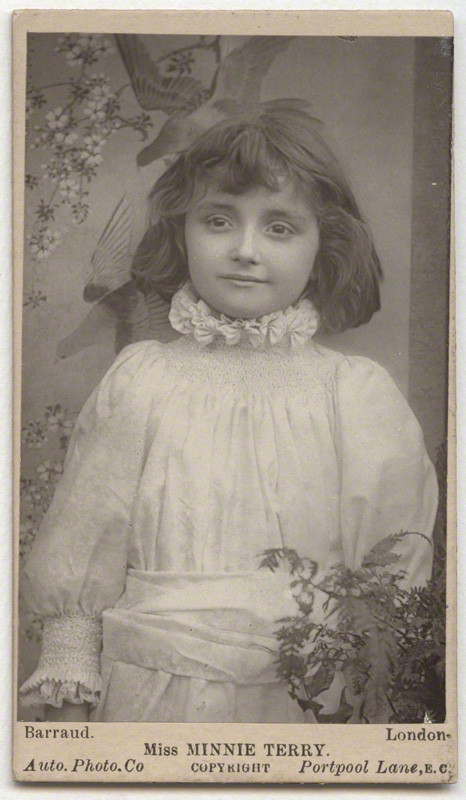 The following two photographs, from the Victoria & Albert Museum, show Minnie Terry in the role of Mignon in Bootles’ Baby. 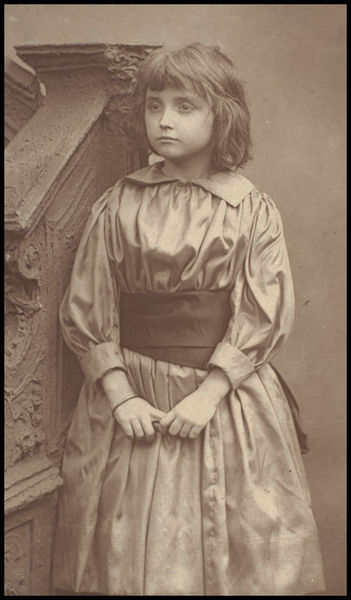 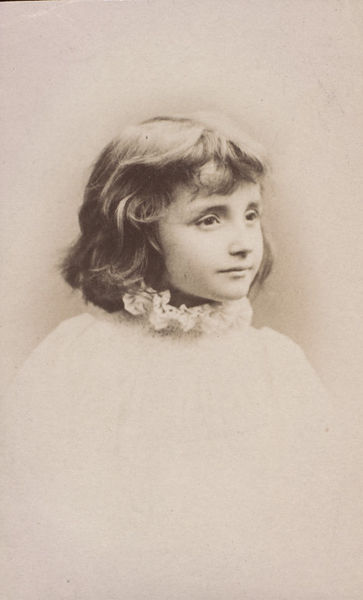 Another one shows Minnie Terry as Mignon, with actor C.W. Garthorne (Charles Warlhouse Grimston) as Captain Lucy, in Bootle’s Baby. 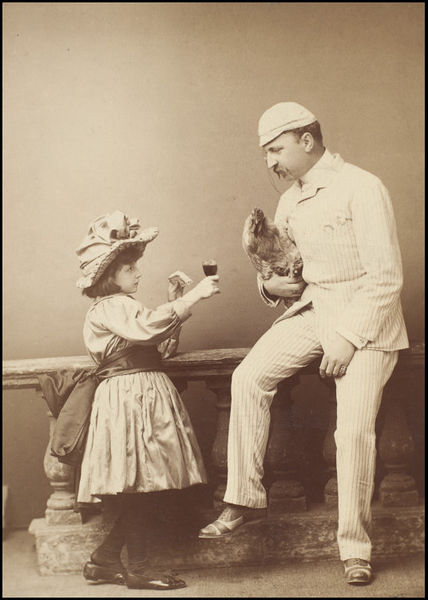 This picture of the two, from the National Portrait Gallery, is probably also from the same play. 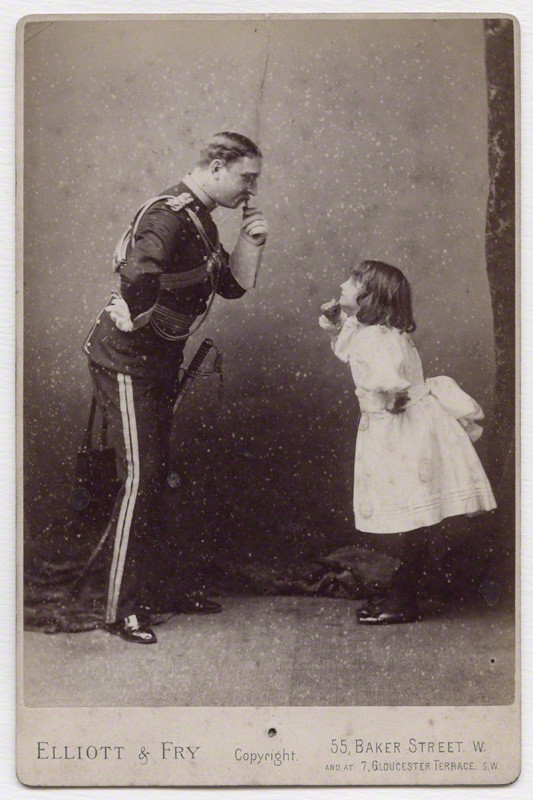 Edit: There is an illustrated version of the book on which this play is based available on the Internet Archive site.  There was also a silent film released in 1914, in which the “Baby” was played by Margaret O’Meara. – Pip

Dowson wrote in The Critic dated 25 May 1889 a review of the play A White Lie (see Appendix A of Letters), in which he gave a dithyrambic eulogy of her role as Daisy Desmond, praising her perfection and spontaneity—even saying that at a critical moment she saved the play from the false note of some adult actor. Here is a photograph of Minnie Terry as Daisy Desmond, from the National Portrait Gallery. 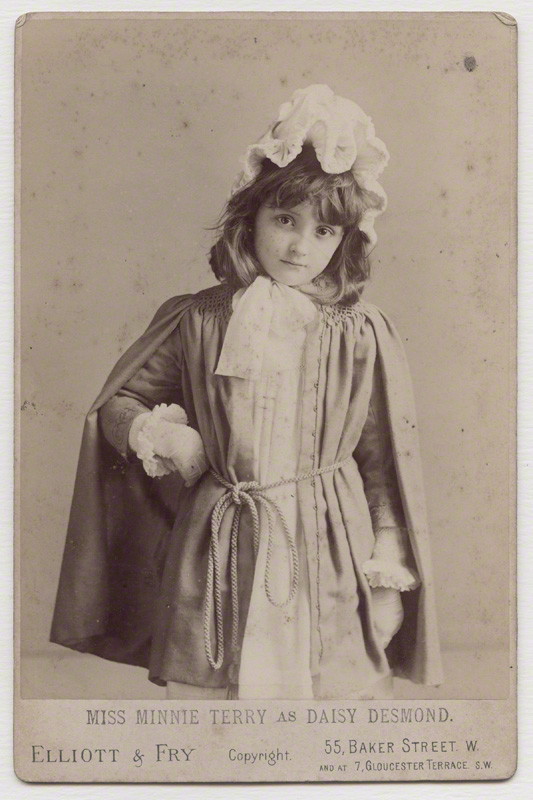 Finally, from the Victoria & Albert Museum, a picture of Minnie Terry in the play On a Doorstep. 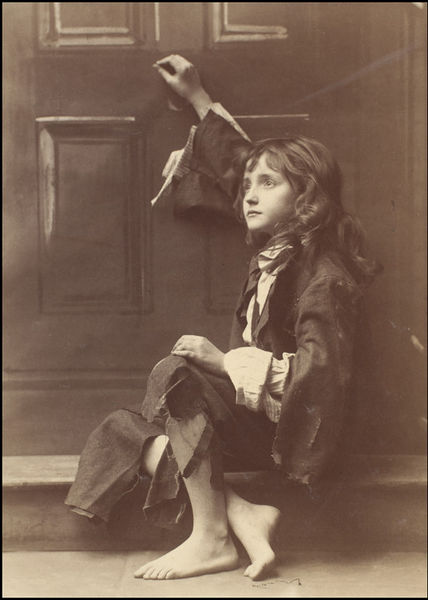 A famous contemporary of Dowson, also an avid theatre-goer, did not share his enthusiasm for Minnie Terry. According to Hugues Lebailly’s article “Charles Dodgson and the Victorian Cult of the Child“, Charles Lutwidge Dodgson (Lewis Carroll) noted in his Diaries on Monday 2 July 1888 that he felt “a little disappointed” with Minnie Terry’s ‘Mignon’ in Bootle’s Baby, deploring that she “recite[d] her speeches, not very clearly, without looking at the person addressed”.

In the summer of 1889, an amendment was proposed to the Protection of Children bill that would have banned employing children under 10 years as actors on stage. Charles Dodgson wrote an article entitled “Stage Children” in The Theatre of 2 September 1889, explaining that playing on stage was a way for poor children to earn some money for their family while having fun at the same time. He “went on suggesting a long list of sensible measures that would secure their schooling, as well as their physical and moral health and safety, most of which were taken up in the final version of the amendment passed later that year” (Lebailly). On the other hand, Dowson wrote in The Critic of 17 August 1889 an article entitled “The Cult of the Child”, in which he stated that children under ten have by nature superior acting capacities, while among adult actors such talents are the exception. He cited Minnie Terry’s role in Bootle’s Baby as an example.

To Dowson, Minnie Terry represented the perfect model for the little girl, as he wrote (Letters, no. 68): “I’ve been kissing my hand aimlessly from the window to une petite demoiselle of my acquaintance—also par exemple a Minnie & presque aussi gentille as her prototype. This has temporarily revived me”.

His devotion to little girls was exclusive, it did not extend to teenagers or adult women. In his correspondence, he expressed his fear of girls growing up into adulthood (New Letters, no. D1, Letters, no. 53). In 1889, he tried “experiments” of platonic love with two teenage girls: first Lena, a barmaid, then Bertha van Raalte, the daughter of a tobacconist. But these relations did not last long; Dowson was not really motivated.

Dowson showed a rather cynical attitude towards adult women; he seemed to have a purely sexual interest in them, which he likened to debauchery and drinking alcohol (Letters, no. 4, 46, and 68). This shows also in his poetry. For instance, in the Cynara poem, one reads “Upon my soul between the kisses and the wine” and “Surely the kisses of her bought red mouth were sweet”. And in the later poem Rondeau, he rejects the “wine-stained lip” of a woman for the “white roses of virginity”. Indeed, it is probable that many of his sexual encounters happened with prostitutes or women he met in bars.

Being fed up with women, he finally confided to Arthur Moore his resolution (Letters, no. 78): “Methinks I will swear off wine & women & weeds & lates hours & confine myself to the writing of the r.o & the cult of Minnie Terry.” (Probably “the r.o” refers to the novel he was writing with Moore). Here are two pictures of Minnie Terry as a kind of romantic pin-up, typical of the Victorian child cult. 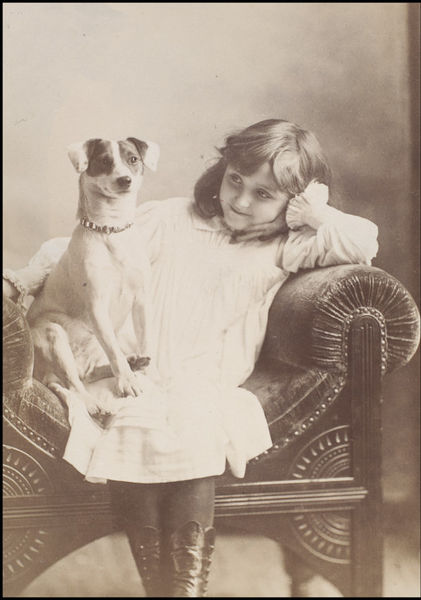 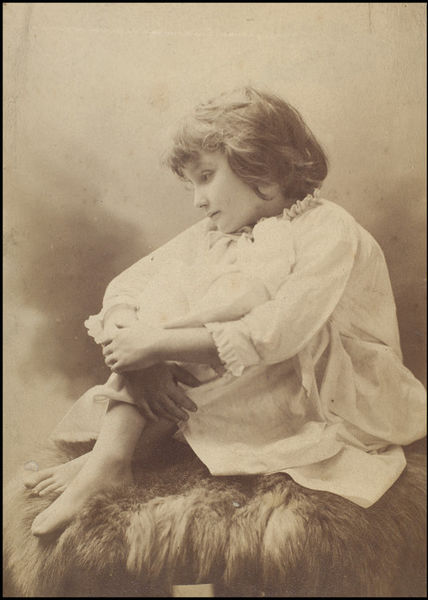 However, within a few months, fate would have Dowson giving up his cult of Minnie Terry. In November 1889, he entered a cheap Polish restaurant held by Joseph Foltinowicz, located at 19 Sherwood Street in Soho, at the back of the present Regent Palace Hotel. “I discovered it. It is cheap; the cuisine is fair; I am the whole clientele, and there is a little Polish demoiselle therein (Minnie at 5st 7—not quite that) whom it is a pleasure to sit & look at.” (Letters, no. 73) The “little Polish demoiselle” was Adelaide, the proprietor’s daughter, aged eleven and a half years, whom he nicknamed “Missie” or “Missy”. He would soon fall in love with her and, quite unexpectedly, he would continue to love her as she grew into her teens (cf. the poem Growth). Although she rejected his marriage proposal and eventually married another man in 1897, his feelings for her did not abate. That is how Ernest Dowson became the great poet of love that we now know. This is a very long story that will be told on another occasion.

8 thoughts on “Ernest Dowson and the Cult of Minnie Terry”