Aron Wiesenfeld (born 1972) is a well-known artist and illustrator that has international recognition. His work has been featured in Juxtapoz and Hi-Fructose magazines but he is also represented by the Arcadia Gallery in New York; that is what brought Wiesenfeld to my attention. He has been accepted by both the Classical Realists and the lowbrow artists that seem to be in ideological opposition to each other. I wondered how Wiesenfeld could prosper—able to find his anima in such an environment. Before I majored in Psychology, I studied art for two years, so my impressions come from experience.

I knew of Wiesenfeld’s work for some time but only recently began to appreciate his strength—lying in the fact that much of his work comes completely from his imagination; he is much closer to the old masters because his work is inventive. During the Renaissance, invention was highly valued—the ability to draw and paint an entire scene from imagination. For example, Caravaggio began the trend of working directly form nature; for this, Pietro Bellori scorned him for “neither invention nor decorum nor design nor knowledge of the science of painting” and that “once the model was removed from his eyes, his hand and his mind remained empty.” While I wouldn’t agree with this critique of Caravaggio, the new schools that claim to have revived traditional art only condition artists to be impassive technicians lacking inventiveness. Their standard for art appears to be paintings that are so realistic that they could be mistaken as a photograph. I suspect they would reject Botticelli’s Birth of Venus as amateurish. Because it is a greater challenge to paint a realistic scene in which many parts are invented, most artists are afraid to attempt it. In this context, the whimsical poetry of Wiesenfeld is refreshing.

It’s interesting that Wiesenfeld illustrated comics for a time and developed his skills from that experience; so perhaps it is better for an artist to study in an illustration department. The artist’s background in comics likely brought him in contact with Juxtapoz and Hi-Fructose, which are known for showing pop surrealism. His work is actually closer to the magical realism of the 1950s, which is anchored in common reality, but has overtones of wonder and the supernatural. I guess the magazine editors thought Wiesenfeld’s work was weird enough, even though it wasn’t pop surrealism. Instead of drawing from the unconscious as the surrealists did, pop surrealism reflects a state of over-consciousness of media images. Sentiments for subjects are treated with an ironic detachment, as if art is a defense against being a “dupe of advertising” (Ron English). Our culture has reached a state of over-consciousness that is suspicious of the instincts; many artists have be conditioned to avoid pretty girls as a subject or if they do, the girls are painted with some kind of prop in a detached manner. 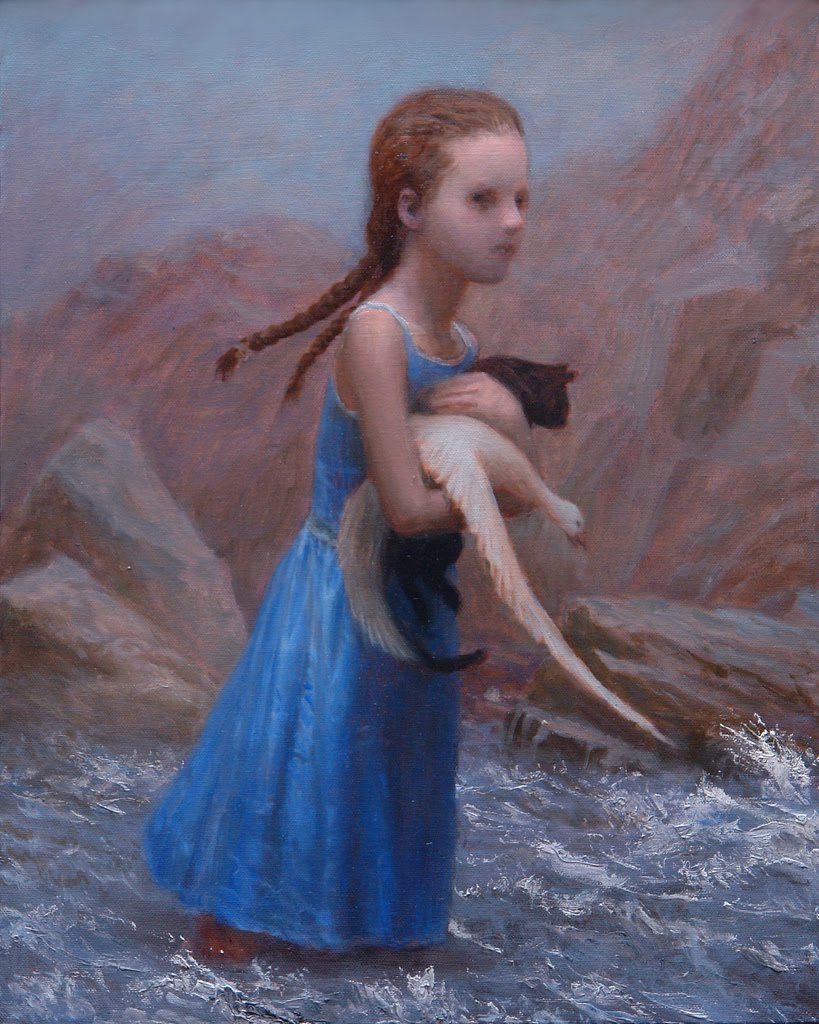 What struck me, was how Wiesenfeld’s use of symbolism differs from that of his peers. In Runaway, a young girl is holding onto a cat and a goose making her way through a flood; the other artists who appear in Juxtapoz and Hi-Fructose would most likely have rendered the cat and goose as stuffed toys, but the runaway is holding onto animals that have significance to her. That is what makes his work so profound; I think this painting is a reflection of the age—the girl has run away. Her portrayal is like the postmodernists in that they lost their foundations (their home), but she still has something meaningful to hold onto. 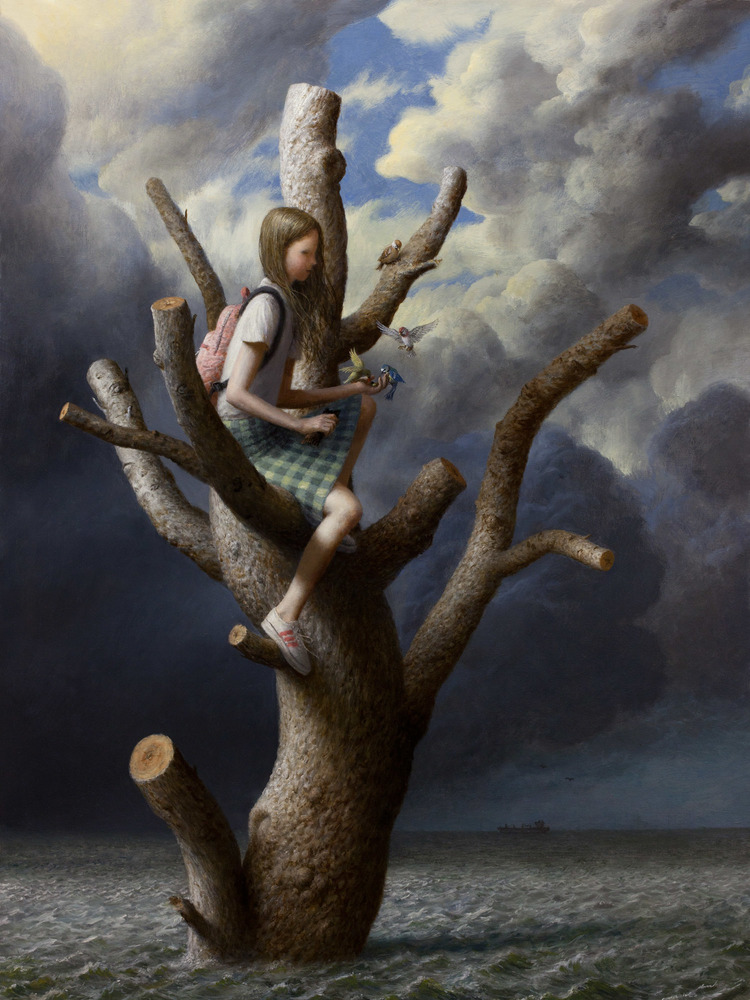 In The Tree, a young girl has climbed a tree surrounded by a flood; as she feeds a few birds from her hand, a distant ship appears over the horizon. The contrast of the desperate situation with the girl at ease evokes the mood of the great 19th century painting Hope by Puvis de Chavannes; without a doubt, the girls are anima figures.

The anima is an archetype that was described by the psychologist Carl Jung. Jung believed the anima was the expression of a man’s feminine inner personality and that it was a source of creative ability. At the beginning of World War I, Jung recorded his series of dreams of a wise old man and his companion, a little girl. Dr.C.George Boeree acknowledged that “the little girl became anima, the feminine soul, who served as his main medium of communication with the deeper aspects of his unconscious.” Amanda Erlanson recognized the influence of the subconscious in Wiesenfeld’s paintings.

“Unlocking the subconscious reservoirs of the spirit should be the highest goal of art, but few painters in the art world have the courage to attempt it.”

Our culture has really lost contact will the anima; although every female that appears in art isn’t necessarily an anima figure, we usually assume that a male only sees a female as an object and denies that a girl in a painting could be a reflection of an aspect of his own being. Some men seem to exist only to punch in and out for work; a young girl could symbolize the joy or freedom absent from everyday life. The denial of the anima is manifested in contemporary art with the trend in plastic dolls. 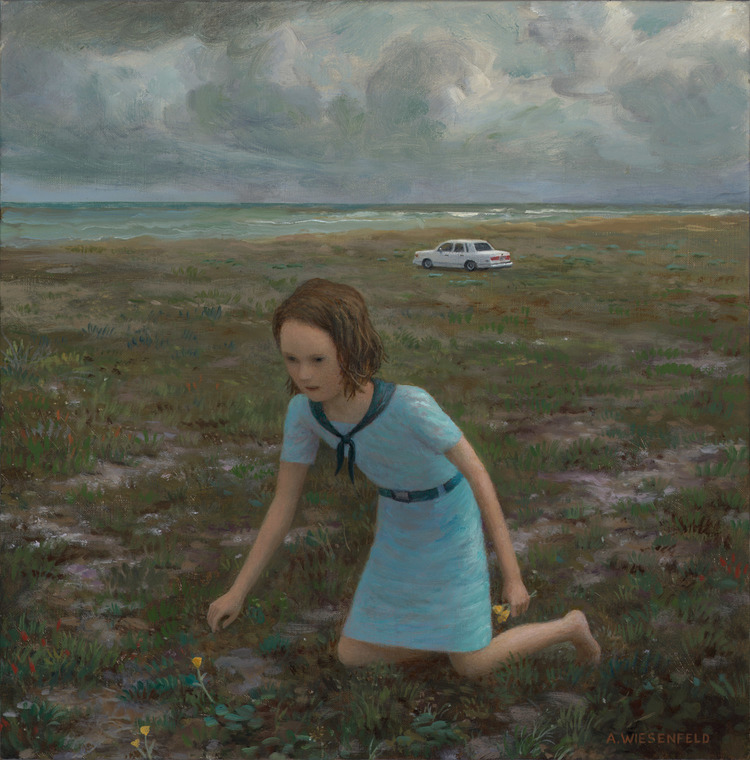 I suppose some will consider my interpretation to be superfluous, but I think that view is mostly due to the state of over-consciousness that Jung discussed. Because Wiesenfeld’s enigmatic girls are from his imagination, I think it is reasonable to say that they represent anima projections; in other words, Scout isn’t just Jenny that lives across the street. That’s why I made the point about invention; the new Classical Realists have been trained to just copy Jenny in the studio staring at the wall. The artist should really be encouraged to paint from intuition. Another artist just posted on Pigtails, Scott Affleck, is one of the few other artists in the same terrain as Wiesenfeld—stepping even further into the unconscious by painting nudes. 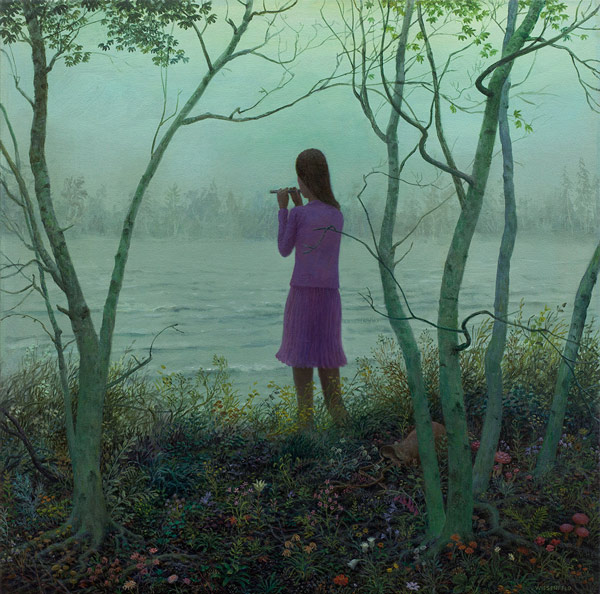 My impressions came from an interest in pursuing a career in art; I found the environment of the Classical Realists to be stifling. I changed my major to Psychology. The lowbrows allow more freedom but, as their name implies, content is not taken very seriously. Ron suggested that I should avoid traditional art criticism; I believe serious artists are forced to live in a vacuum where commentary about how their work contributes is almost nonexistent. Weisenfeld’s enchanting Bloom is the kind of painting that would, for example, be criticized by the Classical Realists for lacking a select focus. They would be oblivious to the fact that all the details of the plants enhance the expression of the work. In the paintings Runaway and The Tree there is a threat in the form of water. In Jungian psychology, water often represents the depths of the unconscious. Due to the fact that a state of over-consciousness forfeits the resource of the unconscious, it remains untamed; there has to be a balance between the conscious and unconscious. Our culture lacks equilibrium—expressive art that reflects a worldview between neoconservatism and postmodern cynicism is not represented. From my research on Wiesenfeld, I realized that he didn’t have as many ties to Classical Realism as I at first thought. I came to the conclusion that a passionate traditional artist would likely need to exhibit with lowbrow art. Unfortunately, if Waterhouse were alive today, he would have to exhibit his Hylas and the Nymphs next to work like Ron English’s Precode Minnie. 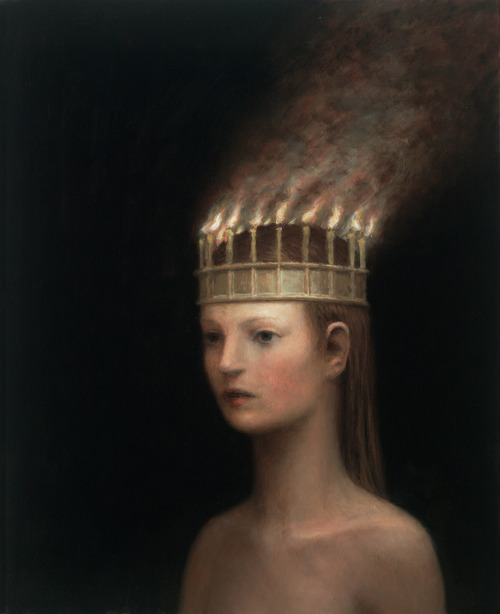 This is Susan’s first submission to Pigtails in Paint, so thank you for your efforts. Wiesenfeld is a working artist and operates out of San Diego producing a lot of young girl/anima imagery in charcoal and paint and his Official Site and Facebook page are well worth a visit. -Ron