One of our readers, Kris, who lives in the Philadelphia area recently informed me of an interesting artist who just opened a gallery in Lambertville, a small town in central New Jersey. She sent me a sample of his work which I felt was well done, but I did not give it too much thought. As I learned more about his work, I felt I had better take a more serious look. Scott Affleck (born 1972) specializes in figural painting and convincingly integrates the female figure into his scenes. His pieces are not mere pretty cliches but are strong expressions of social commentary. 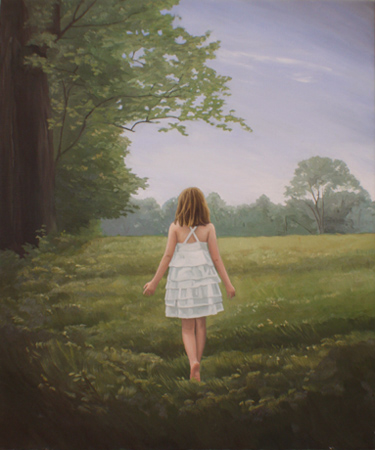 The first image I was shown was actually an unfinished work titled Babel. This is a reference to the Biblical story and a boy is shown focusing on his sand castle (the tower). Apart from offering a lesson about hubris–the tower also standing in as a phallic symbol—the girl is holding her arms out, signifying vastness and futility. The artist states that the girl’s pose is intentionally Christ-like, heightening the contrast between the material and spiritual endeavors of the two children. Joseph Campbell used to say that if a work of art really speaks to you, no explanation is necessary but if an artist wants to be insulting, he will tell you what it means. However, given this age of literary and symbolic ignorance, I think it pragmatic and prudent for Affleck to describe his intention whenever a visitor asks for it. 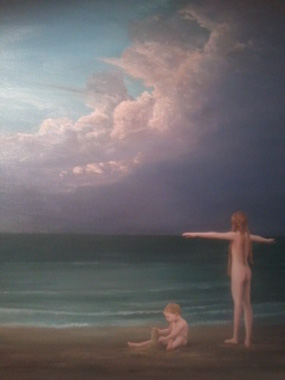 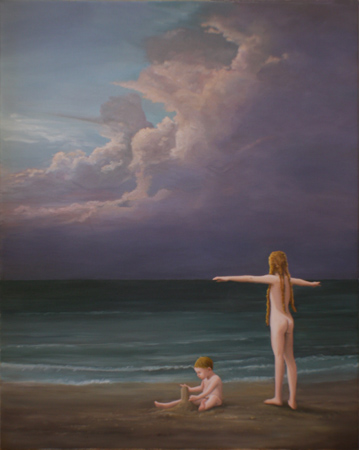 Affleck discovered his passion for art while attending Hunterdon Central High School, where he participated in an arts program for the gifted. He later studied under the guidance of Valeriy Belenikin and received an Associate’s Degree in Fine Arts from Bucks County Community College. His influences include Sandro Botticelli, Leonardo da Vinci, Giorgione, Puvis de Chavannes, Ferdinand Hodler, George Tooker, Ken Kiff and Jock Sturges.

Even his choice of venue for the gallery was fortuitous as it is located in a small town just across from where an artist colony existed in the early 20th century. Participants included Edward Redfield, Daniel Garber and Roy Nuse—the last artist being well-known for his paintings of skinny dippers. The Grand Opening took place on November 8th and the artist sold two paintings that day—one of a cow and another of a tractor. He found that strange since he puts so much heart and soul into his figural paintings.

Many of his works are inspired by literature as in his interpretation of Plato’s Allegory of the Cave. Plato described a group of prisoners who lived chained in an underground cave all their lives. The prisoners spent their time watching a puppet show projected as shadows on the wall, which they mistook for reality. In Postmodern symbolism, dolls are used in place of puppets to reflect cynicism and the recognition of hypocrisy, as though objective values did not exist. In Affleck’s painting, an adolescent girl of about twelve enters the cave to free the prisoners—despite admonitions that she would be killed. Over time, the artist began to appreciate the significance of that age—when a girl reaches a level of consciousness that questions the hypocrisy of the world while still holding on to her idealism. Such sentiments tend to be mocked in contemporary art and Affleck believes it is an inevitable symptom of the greater level of alienation experienced during the transition from childhood to adulthood in the modern industrialized world. The girl stands in opposition to the values of this age and her nudity motivates self-honesty—casting off the empty honors of this world. 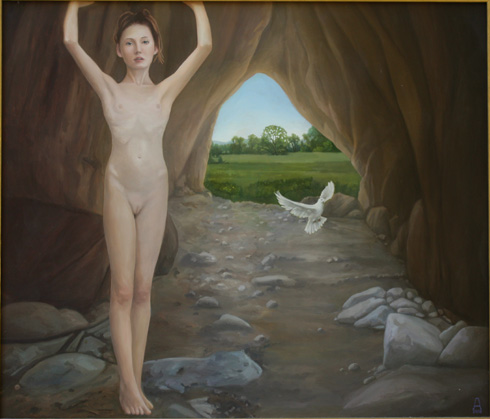 Affleck believes many of his figural paintings are a therapeutic response to today’s pervasive conditions of alienation. Postmodern theory denies this state, so the mood of his work stands apart from those of his peers. It was not his intent to be a contrarian, only to produce art that came naturally to him. Fascinated and influenced by the Symbolist movement of the late 19th and early 20th Centuries, he goes beyond the theme of youth as a metaphor for innocence but uses it to represent integrity instead. Perhaps Affleck’s clearest example is Resignation Is Liberation, inspired by George Orwell’s 1984. As a kind of homage to Sandro Botticelli and George Tooker, he painted it on wood. 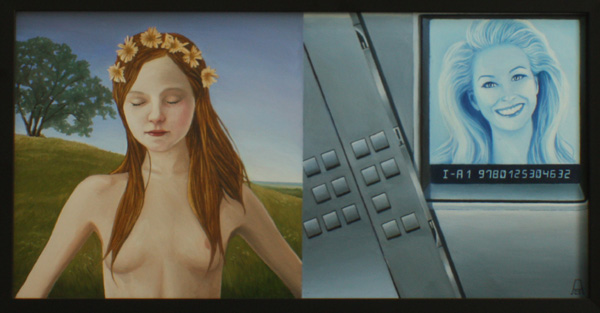 He wasn’t sure if his ideas had any kind of validity until he found this poem written by a 13 or 14-year-old girl. It seemed to confirm his view.

You will never have a home again
You’ll forget the bonds of family and family will become just family
Smiles will never bloom from your heart again, but be fake and you will speak fake words to fake people from your fake soul
What you do today you will do tomorrow and what you do tomorrow you will do for the rest of your life
From now on pressure, stress, pain and the past can never be forgotten
You have no heart or soul and there are no good memories
Your mind and thoughts rule your body that will hold all things inside it; bottled up, now impossible to be released
You are fake, you will be fake, you will be a supreme actor of happiness but never be happy
Time, joy and freedom will hardly come your way and never last as you well know
Others’ lives and the dreams of things that you can never have or be part of, will keep you alive
You will become like the rest of the world–a divine actor, trying to hide and suppress your fate, pretending it doesn’t exist
There is only one way to escape society and the world you help build, but that is impossible, for no one can ever become a baby again
Instead you spend the rest of life trying to find the meaning of life and confused in its maze.
-Fiona Miller, c1987

He recently completed and posted his latest work; he got the idea of painting a trenchcoat on a woman encased in steel. Steel is a particularly potent symbol as it was one of the first materials to be mass-produced in the Industrial Revolution and effectively communicates a visceral reaction to a cold and impersonal age. 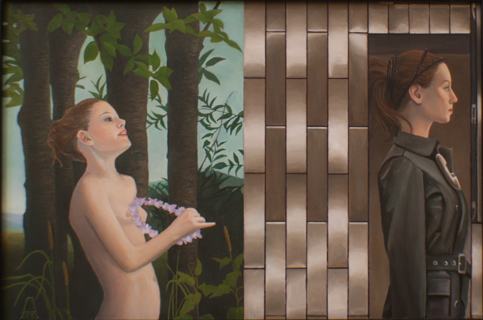