As Ron has remarked before (I think), it’s odd how the most seemingly unrelated things can lead one to on-topic images.  Such was the case here.  What started as research of famous weird trees after reading a Facebook article about the most beautiful trees in the world in short order brought me to the work of Jack Gescheidt, and eventually to this photograph.

One of the trees featured in the FB article was the so-called Angel Oak (which actually has it’s own Wikipedia page), and I decided to run the term through Google Image to see the tree more in-depth.  But something caught my attention: there were several photos of this tree with naked people on or around it.  Although none of the thumbnail images I initially saw in the search appeared to have children in them, I loved the whole concept and started to peruse those.  I discovered that many of these images were taken by the same photographer, Gescheidt, and I explored his website.  Now, many of his photos, although technically proficient, weren’t particularly interesting to me, but I found Gescheidt’s naked tree people images to be quite lovely and unique.  They were part of something called the TreeSpirit Project, which has its own website that includes a gallery page, and that’s where I came across this photo.

Please note: the vast majority of the images there contain nude adults only.  A couple have infants of indeterminate gender in them, and only one—this one—contained young girls identifiable as such.  All of the images are beautiful nonetheless; you really should check them out.

Edit: Jack Gescheidt replied to this article and pointed out that the TreeSpirit Project is ultimately about bringing attention to the beauty and importance of trees, which is a passion I share. So, please do visit his website, and better yet, contribute to his wonderful and vital cause! 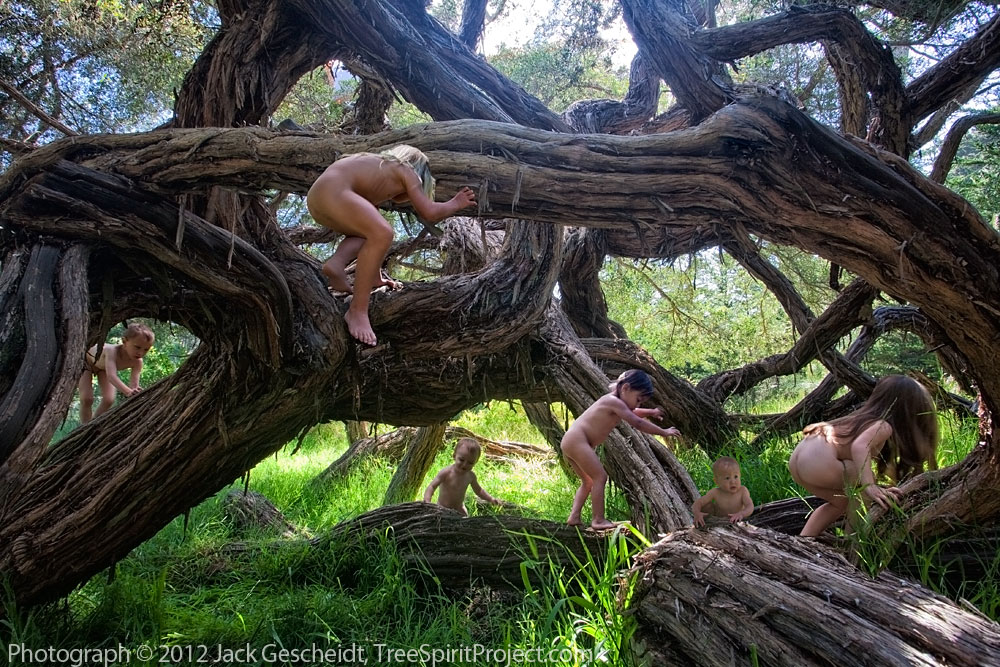 Edit 2 (6-25-17): I was clued into the fact that Mr. Gescheidt has another image featuring children (including a group of girls to the far left) though they are much farther away from the picture plane save for the little blond toddler in front whose sex cannot be determined from this image.  Rather than make an entirely new post, I decided just to add it here. – Pip