In the early days of photography, a sure way to fame would be to: shoot important sitters and have them exhibited at important venues or have your work consistently reproduced on postcards. Many, like Reutlinger, did both but the child studies of Rita Martin are perhaps the most charming in existence. With a somewhat common name like this, it was difficult to find correct biographical information until an associate who is an avid collector provided it and most of the scans for this post. I want to thank WCL for his contribution and hope to see more of his collection on Pigtails in the future.

Both Margareta “Rita” Martin (1875-1958) and her elder sister Lallie Charles recognized the commercial potential of photography after being employed by Alice Hughes. In the London of the 1890s, Hughes was the leading society photographer and at its height, had a large staff of exclusively women running her operation. When Charles decided to open her own studio in 1897, Martin joined her to help. She opened her own studio in 1906 following the Hughes formula: photographing subjects in pale colors against a pure white background and avoiding men and boys over a certain age. It was Hughes’ contention that men’s apparel was unattractive and not visually engaging to photograph. Martin focused her efforts on actresses such as Lily Elsie and Lily Brayton and child studies—particularly of Gladys Cooper’s two children. However, her most reproduced child studies were of the Luke children—whose father, a carpenter, was responsible for building her second studio. Martin‭ ‬had photographed royalty including Queen Elizabeth as well as the current Queen Mother as a child. Martin’s and Charles’ few surviving negatives were presented to the National Portrait Gallery by their niece Lallie Charles Martin in 1994.

Even Martin’s “conventional” child portraits were distinctive as she took pains to include the subject’s hands creating a somewhat bashful appearance. A couple of these images were published in Graham Ovenden’s Victorian Children. 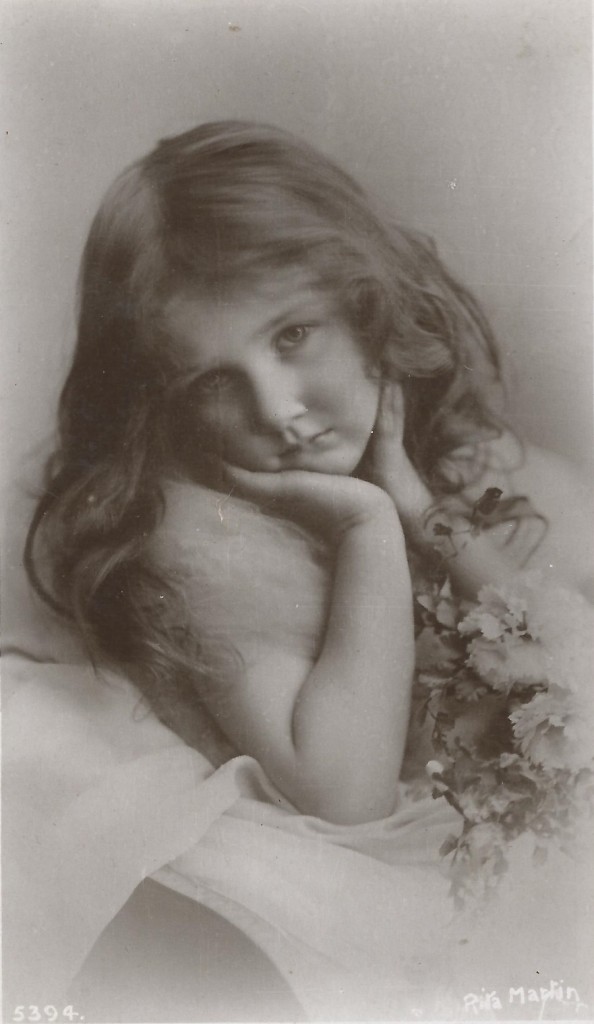 Martin’s child subjects were usually accompanied by some kind of prop like a sofa,‭ ‬bathtub‭ ‬or other whimsical scene.‭ Consistent with Victorian attitudes about the innocence of children, they were shot in various ‬stages of undress. The artist usually refrained from giving her work titles as postcard producers would likely attach their own phrases to punch up their appeal anyway. Many images saw multiple releases in various forms—including some colorized and some in sepia—making dating difficult. The first postcards featured are of the same girl model preparing for and taking a bath. There are several that belong to this series. ‭The first is a colorized version and has the title “Why Don’t They Bring My Frock?”‭ 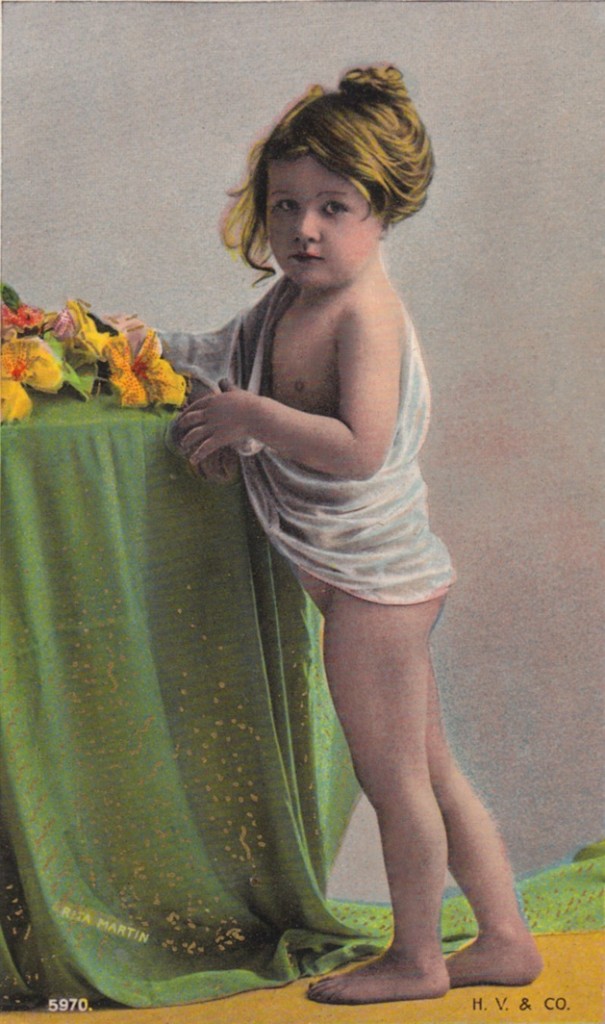 ‭In the next two images, the sponge seems to make the scenes more sensuous. The first has seen many titles including “Oh! It’s Cold”, “The Order of the Bath” and “A Sponge Down”.‭ 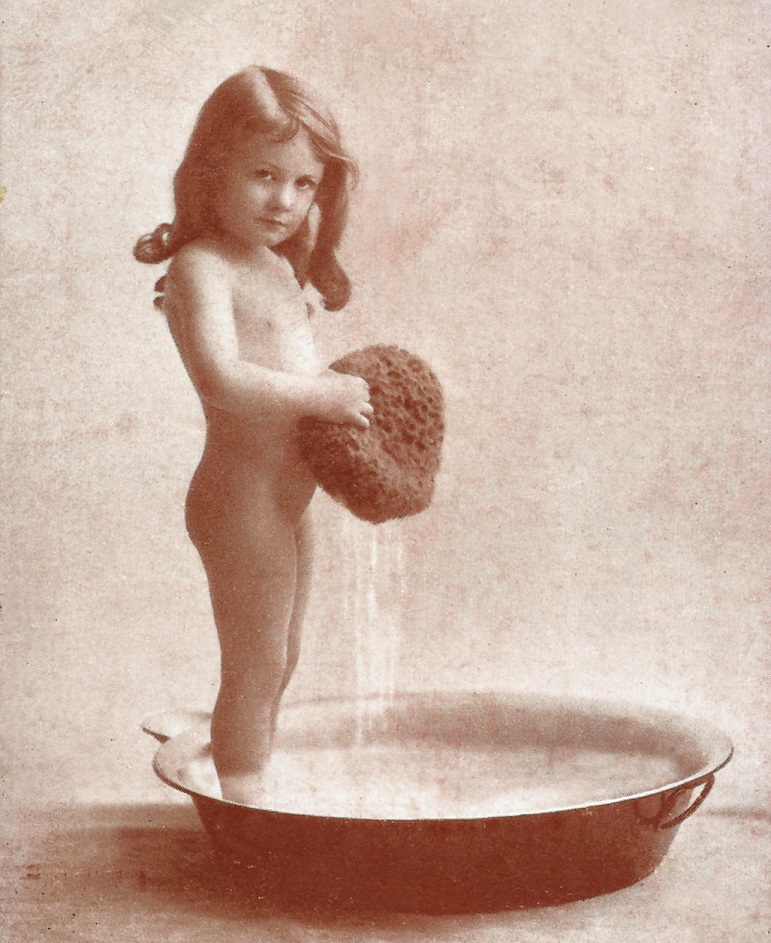 ‭This image has the title “A Cooler”.‭  The next image originally appeared on this site as part of a vintage postcard series. -Ron 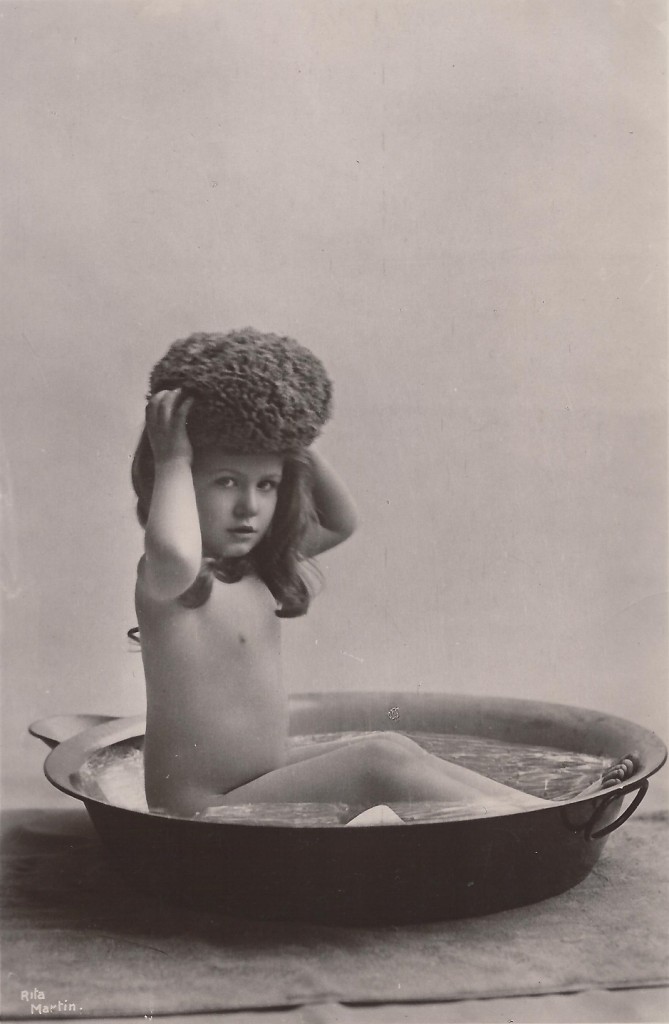 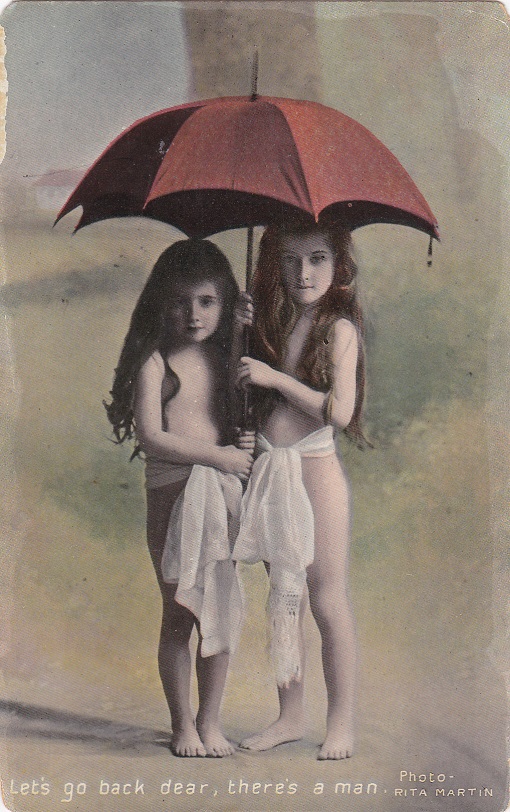 This lovely girl stands behind a set of bars with a well-placed bouquet.‭ ‬The first has the title ‭“‬Behind the Screen‭” and the sec‬ond is titled simply “Shy”. Martin’s work even caught the attention of postcard makers in Germany and these two were printed in Berlin.‭ 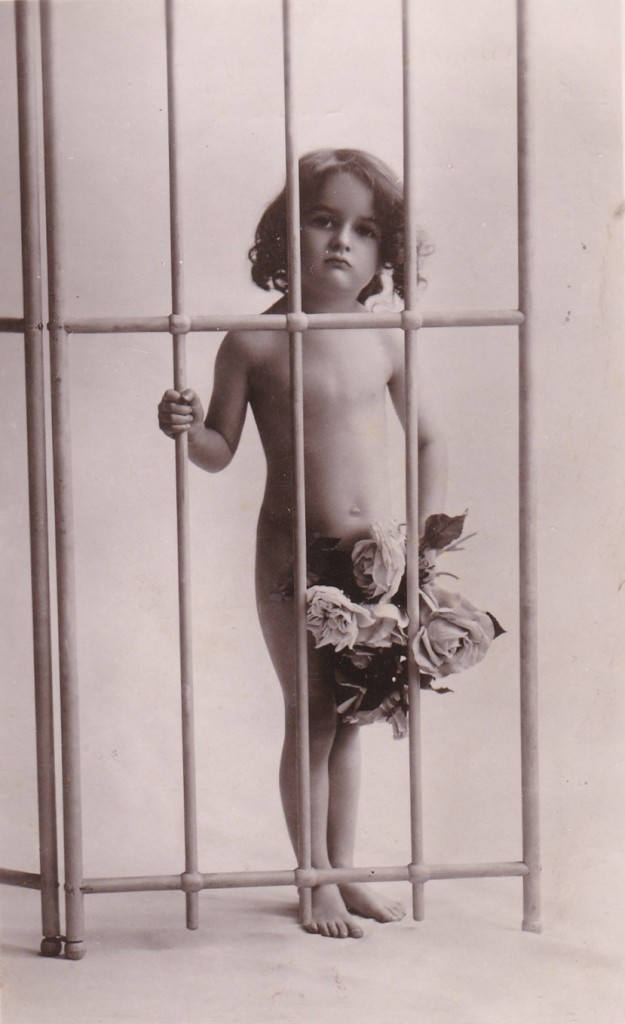 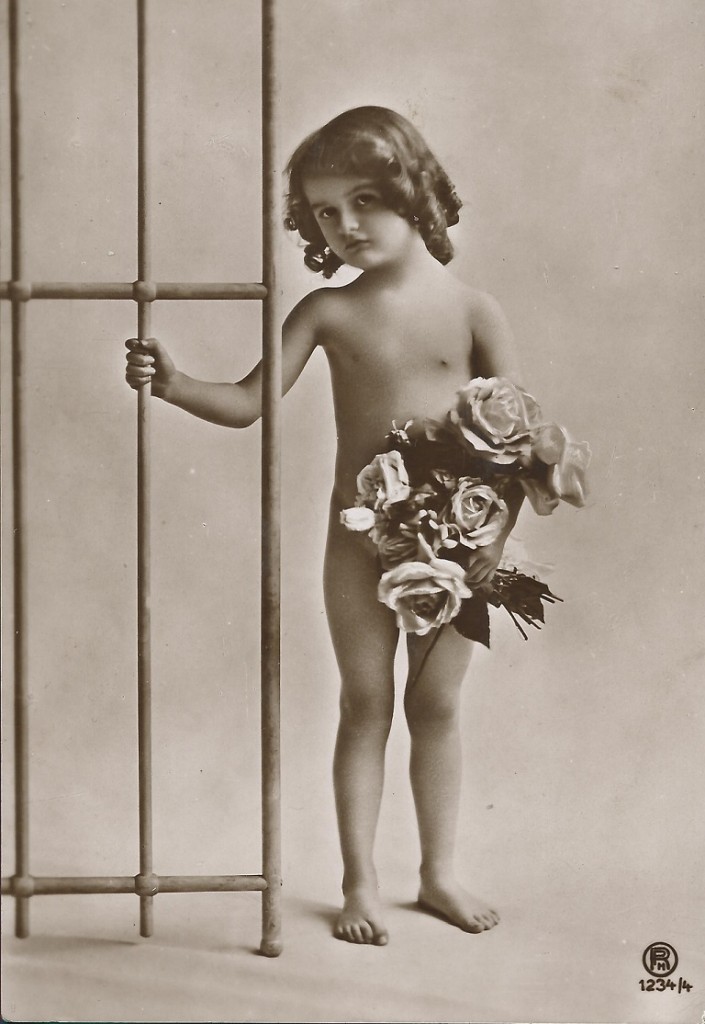 One of WCL’s favorites is entitled‭ “‬Back Numbers‭” fea‬turing three bare butt children sitting together on a railing from behind.‭ ‬This one features a rare appearance by a boy and has a 1914‭ postmark from ‬a French address. 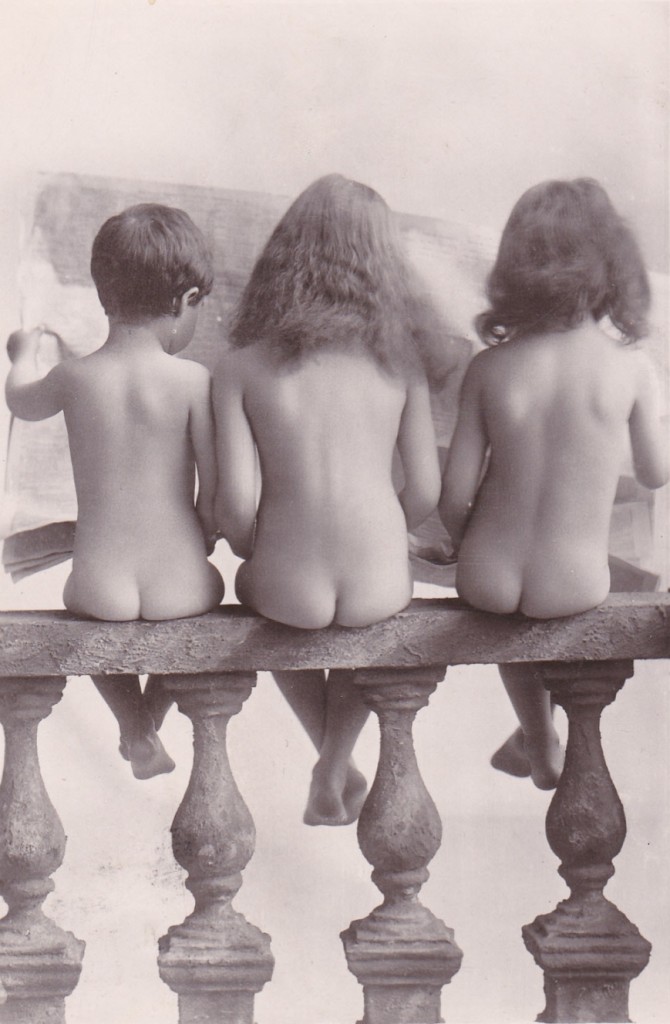 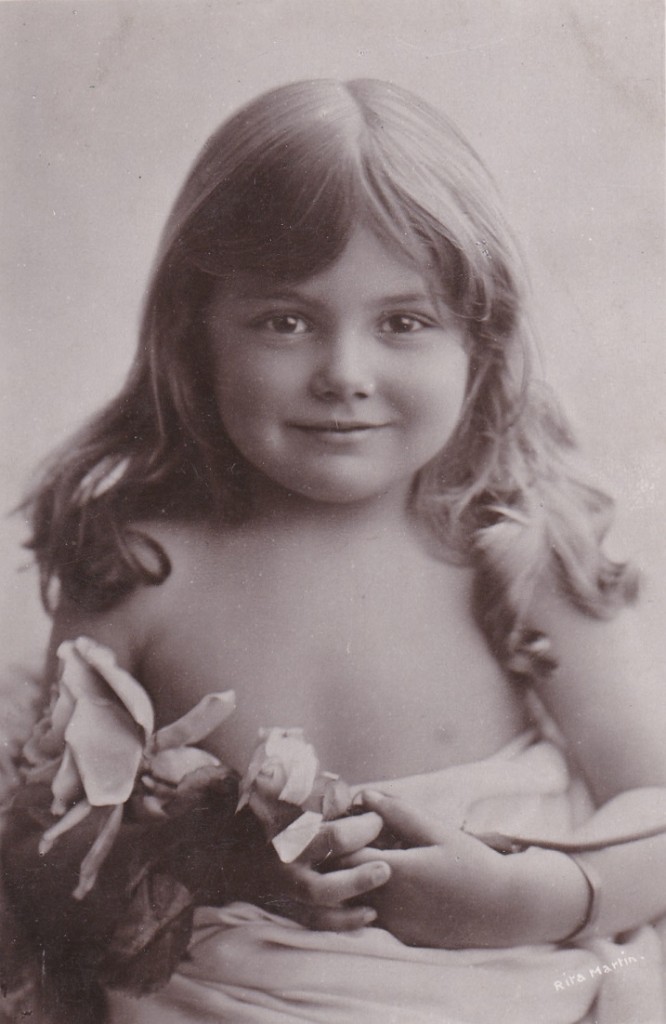 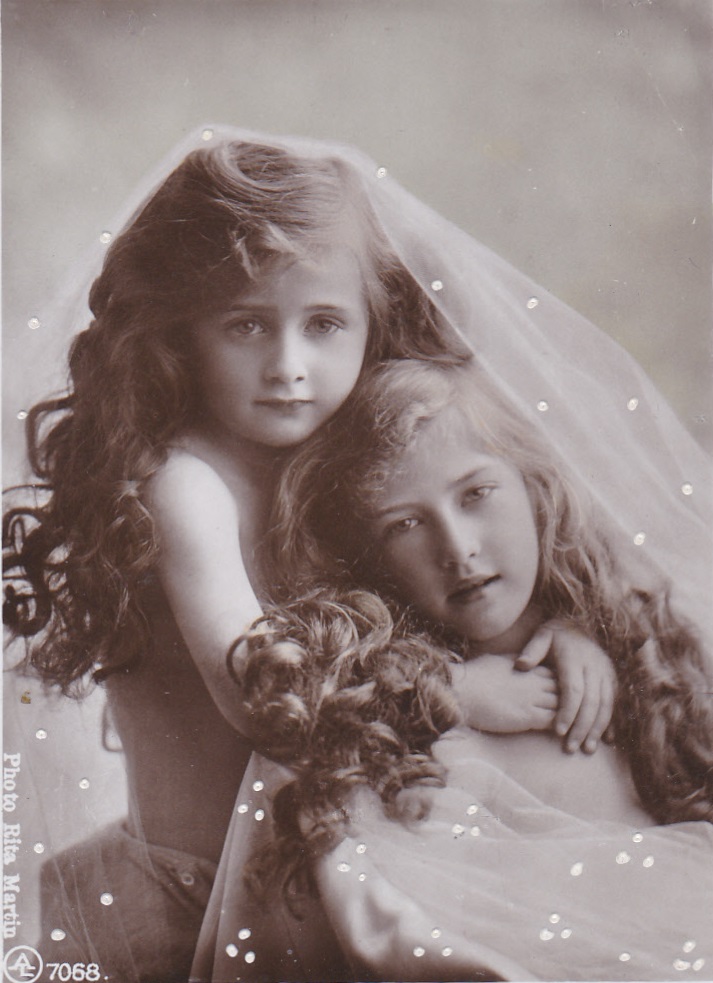 Or the quote can be a light-hearted greeting as in this birthday card. 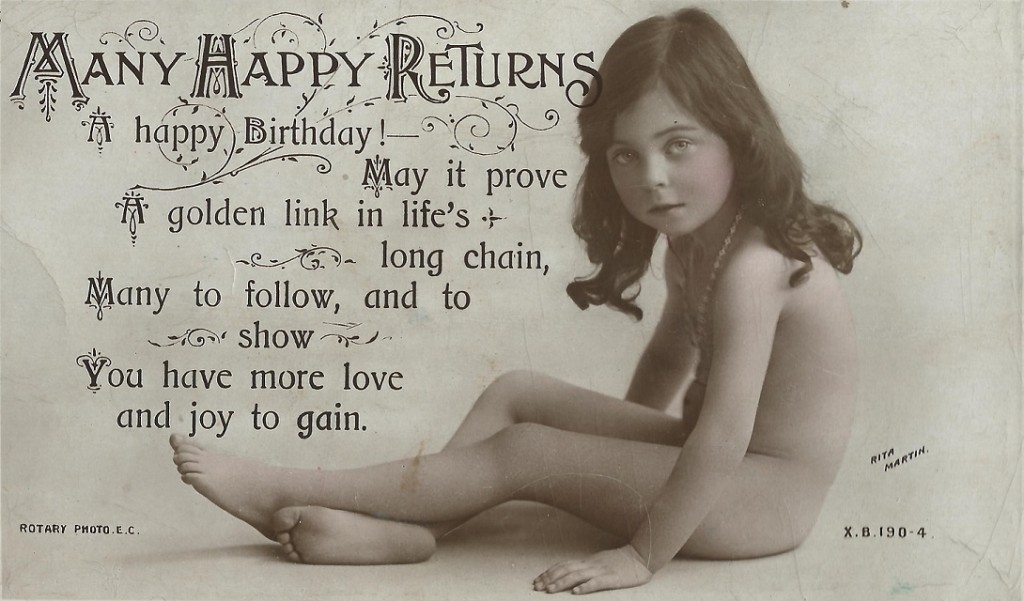 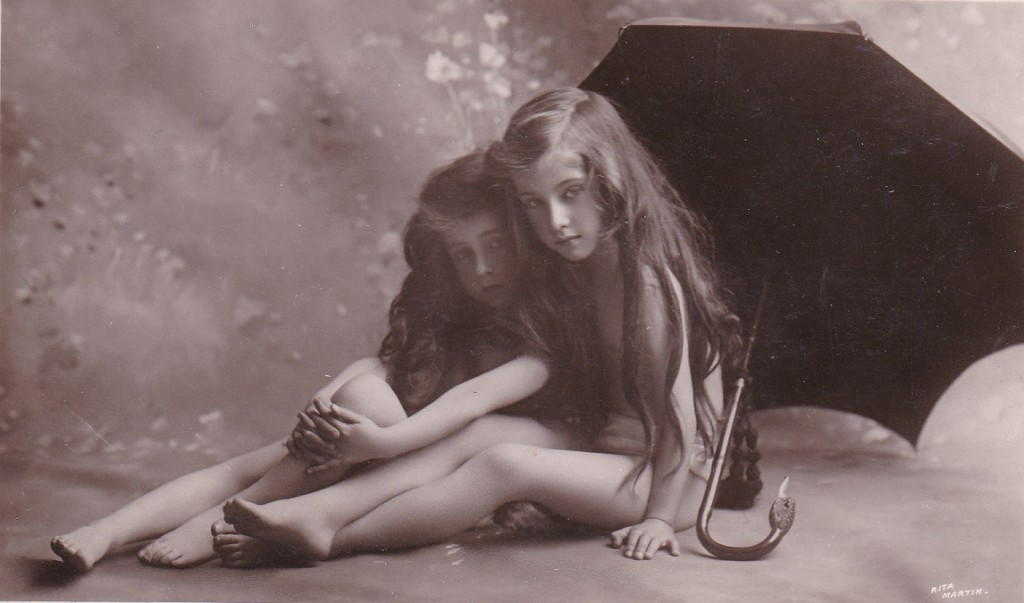 WCL is always adding to his collection, so if you have anything interesting you would like to share, you can reach him through this site.

The models are supposedly the children of famous people (or of the Luke family), but they are not specifically identified on each of these images. It would be appreciated if someone—especially in the vicinity of the National Portrait Gallery in London—could offer more information. For those who have not attempted visiting an archive before, an appointment is usually necessary to examine the relevant materials. In this case, small sets can be retrieved in advance focusing on specific models. The photographs at NPG are stored together according to sitter—not artist—which suggests that at least the names of the models might be known. I have also been informed that they have a box filled with many photocopies of magazine pages where Martin’s work was published. Anyone interested in doing a little leg work can contact this site and get specific contact information to get started.

2 thoughts on “Invitation to the Bath: Rita Martin”