A few years ago, I had the opportunity to purchase some photographs that were part of a reserve used for publication in naturist magazines in the 1980s. Properly, naturist photography is classified as photojournalism and not art. But because of the subject matter, oftentimes an image strikes a chord—accidental art, if you will. I noticed some photographers seem to have a knack for capturing the charm of childhood and I was introduced for the first time to names like Leif Heilberg, Iris Bancroft and Michael Otto. 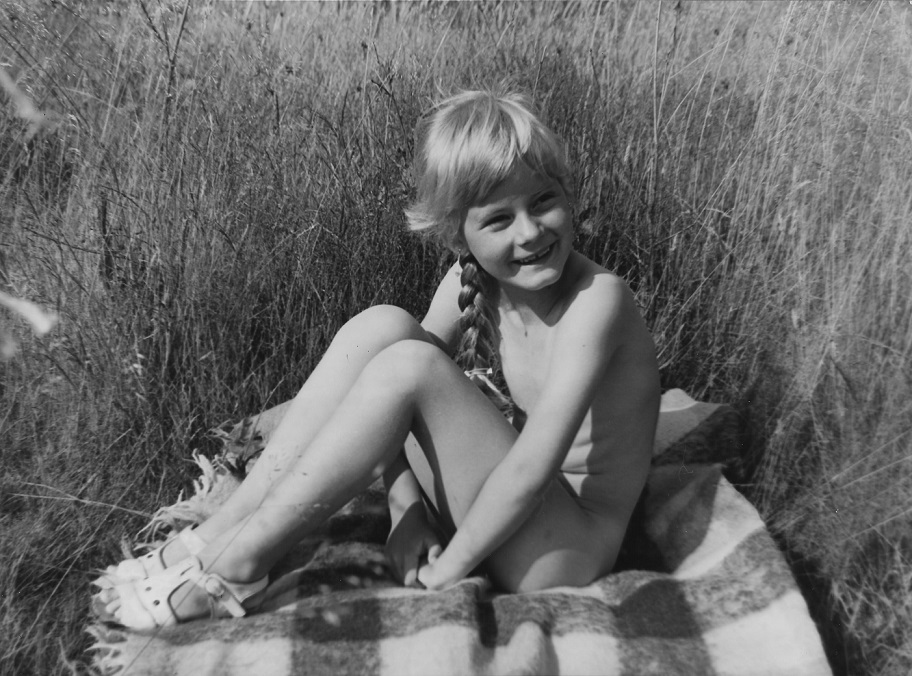 Later, when researching Lotte Herrlich (post forthcoming) for this site, I found a short biography (in German) written by Michael Otto and was delighted to discover an account of his childhood and how he became a naturist. Except for those born into that culture, I think many of us are curious how one becomes interested and then involved in such a group. The most uplifting thing about Otto’s story is that it is so playful which I think captures the true spirit of the practice. And by coincidence, I happened to be reading Play: How It Shapes the Brain, Opens the Imagination, and Invigorates the Soul by Stuart Brown, MD and Christopher Vaughan which helped frame in my mind the sincere intent of these people. Michael Otto was born in 1959 in Hamburg, Germany. Before telling his tale, he advises the reader that there is no single path to nudism and each person must find his own way and have a genuine desire to be naked with no ulterior sexual motives. Some people seem to need a little nudge, but that is easy once they see how beautiful and pleasant nudity can be. 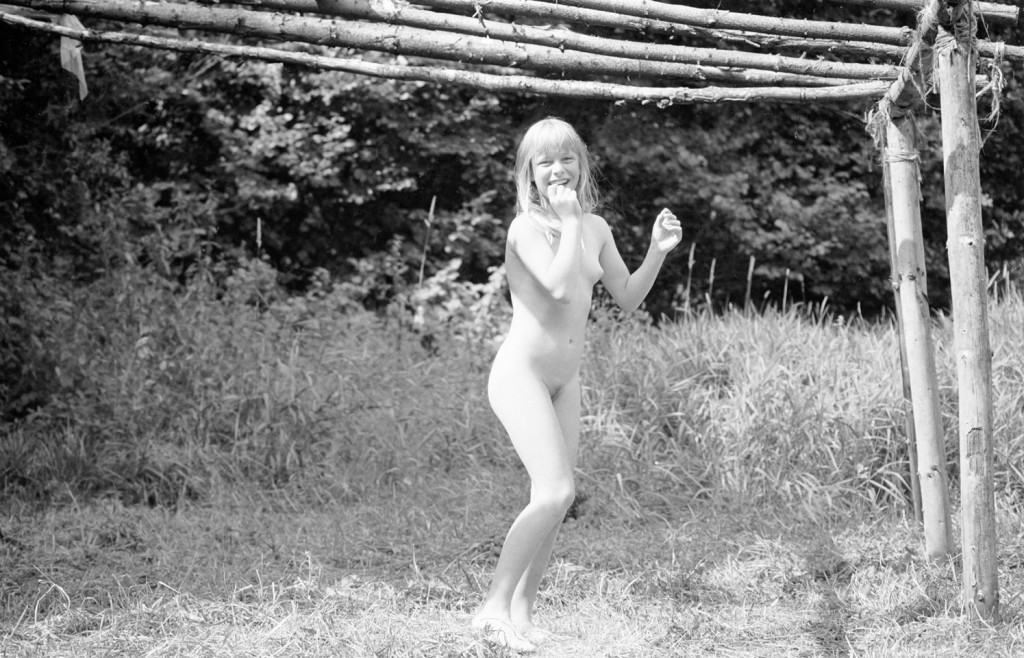 He remembers taking an interest in being naked and in being around other naked people in 1969 (at age 10). At that time, there was no internet, so a child’s routine was typically school then homework then outside to play. He, his best friend and the other neighborhood boys would usually play soccer, but when girls were around, they had to play something else. A favorite pastime was “Spin the Bottle” and, in the beginning, the rules seemed harmless enough. If the bottleneck pointed to someone, that person would have to do a somersault or a handstand or some other benign “dare”. However, at some point, the girls came up with the idea that the person would have to take off an article of clothing. In due course, some player would end up completely naked and then what? They decided the way to raise the stakes would be to have him/her run naked at least 25 meters down the street and back again. The girls were very resourceful, dressing as though it were the dead of winter so the boys were usually naked early in the game and the girls arguing about whether a particular article of clothing counted as one or two garments. Nevertheless, the girls would sometimes reach the point of being completely naked and have to run down the street. Otto felt it was a nice feeling to be naked and to be naked with other children. In a more extreme version of the game, a kid would end up completely naked and have to ride his/her bike around an entire city block! However, given the speed at which they rode their bikes, it seemed that no one had ever noticed and as far as everyone knew, they were just a bunch of well-behaved children. For some, even this escalation was too easy so more innovative and forbidden dares had to be concocted. 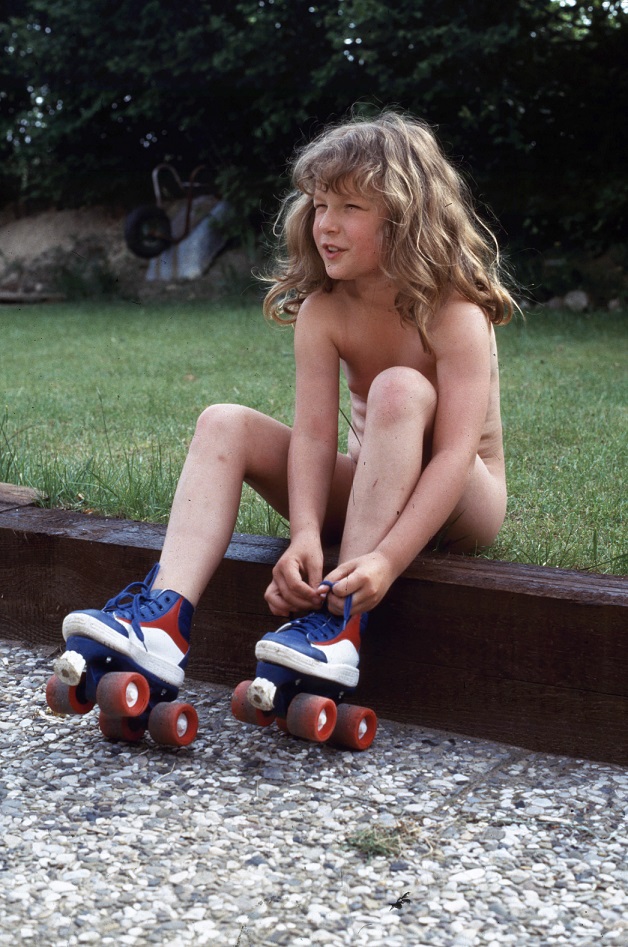 The problem for Otto was that since he enjoyed these activities with the other children, he wondered what it all meant and who he could talk to about it—surely not his parents, siblings or teachers. Therefore, this secret pleasure had to stay hidden from others for the time being. The family had a large backyard garden but the neighbor’s was better because it had the advantage of being much larger, L-shaped and included a small shed at the end which could afford some cover. He could enter the garden by climbing the fence, but none of the adults would do that so there would be plenty of warning if someone entered the garden through the gate at the other end. At first, these excursions into the garden naked were an adventure, but after a while, it was boring just wandering the same patch of garden by himself. At some point, the family had to move and the new situation did not allow for any further excursions. 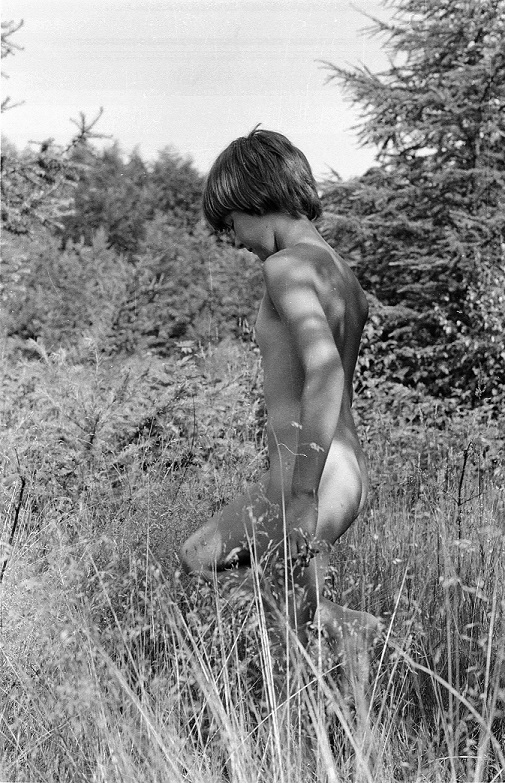 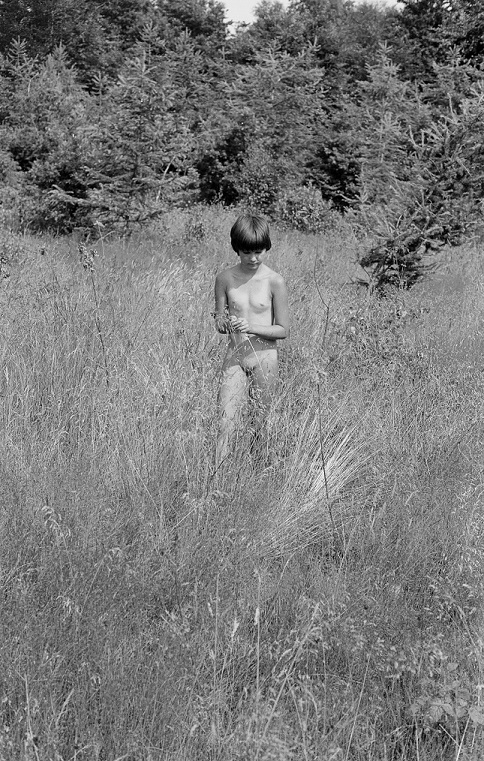 During that time, he had heard of nudism, nudist clubs and nude bathing beaches, but they were unavailable to a child because they were too far away and he would have to ask his parents or siblings, who certainly had more important things to deal with. He realized it would be years before he could fulfill his dream of being naked openly. At age 17, he took an interest in photography and his first camera was a Yashica. After completing school and studying for a profession, he served a short tour in the German Army (Bundeswehr) in 1981. In the course of his training and assignments, he became comfortable and familiar with the city life of Neumünster. It was there that he had another memorable experience with nudity.

One of Otto’s training exercises took him and a small group to the Cologne (Köln) area. The exercise included a three-day endurance and orientation march. They disembarked and after reviewing the proper use of the compass, they set out in the direction of their base camp. It was a warm summer and they were carrying a full backpack and military equipment which weighed much more than they do today. After a few hours, they reached the site, drenched from their profuse sweat and convinced—had there been any real enemy—that their odor would have signaled their presence for miles. After setting up their camp situated near a cool mountain creek, they wasted no time and jumped fully-clothed into the chilly water. Then there was the problem of drying out the uniforms, so they took them off and waited patiently for them to dry stark naked. These were his first hours spent in nature naked and all the men seemed to enjoy the experience—getting into their sleeping bags naked and even performing their guard duty shifts in the buff! It may have seemed silly, but his was the only group that returned without an offending cloud of stench from wearing their uniforms for three days.

After returning to Neumünster, he could not find any nude clubs in the area and he managed as best he could to get a hold of naturist magazines. He decided to go out and find a suitable forest to roam in. He finally found one just north of Einfelder Lake—now a built up area—and screwed up the courage to take off his clothes and explore like a naturist. He visited there many times since. After completing his military service, he returned to Hamburg. There, he could socialize with a consistent group of people he knew and who knew him. He planned a couple nudist vacations (Cap d’Agde in France and Rovinj in Yugoslavia), but as a one-time guest, it was difficult to take full advantage of the social life there. It took him a little while to realize it, but his friends, his “family” in Hamburg were a legitimate naturist group and he had achieved his dream. 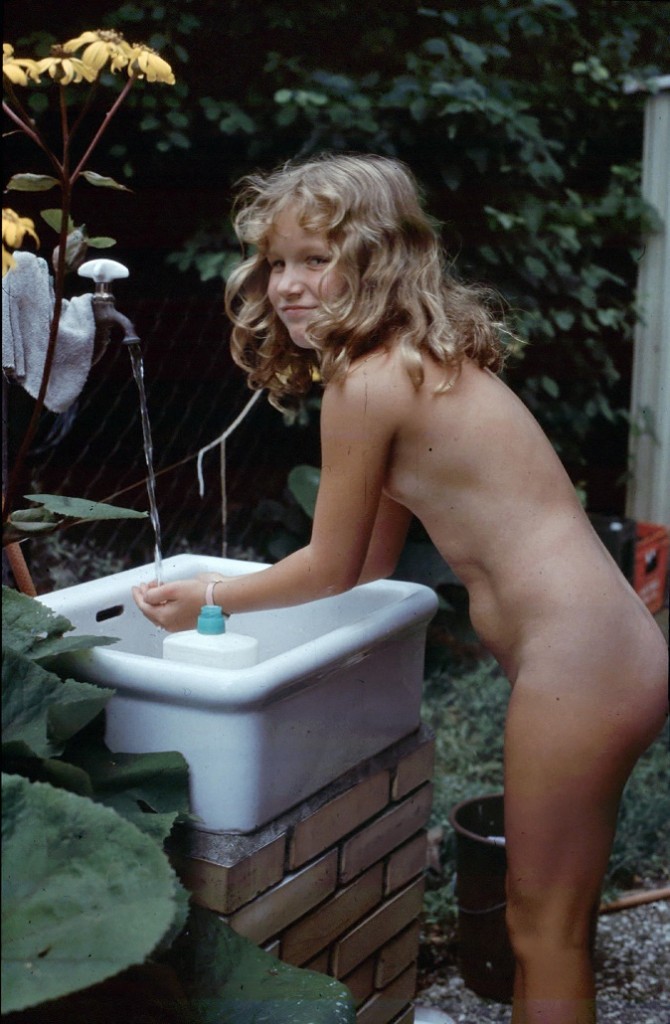 Naturally, he wanted to document this happy time and these wonderful people and thought with his experience as a photojournalist, he could bring his two hobbies together while legitimizing the group to the naturist media. He assumed he would be taking pictures of his adult friends but, as strange as it may seem in today’s political climate, they were reluctant to be photographed and offered their children as subjects instead. It’s really logical if you think about it; children exemplify the free spirit of naturism and parents would be more than happy to have someone capture these treasured memories of their beautiful children. Once Otto got established as the group’s photographer however, adults did begin to participate. Familiar with the nudist (FKK-Freikörperkultur) magazines of the time, he offered some selections for publication and got to see his pictures in print. And today he is still friends with his former models and their parents. 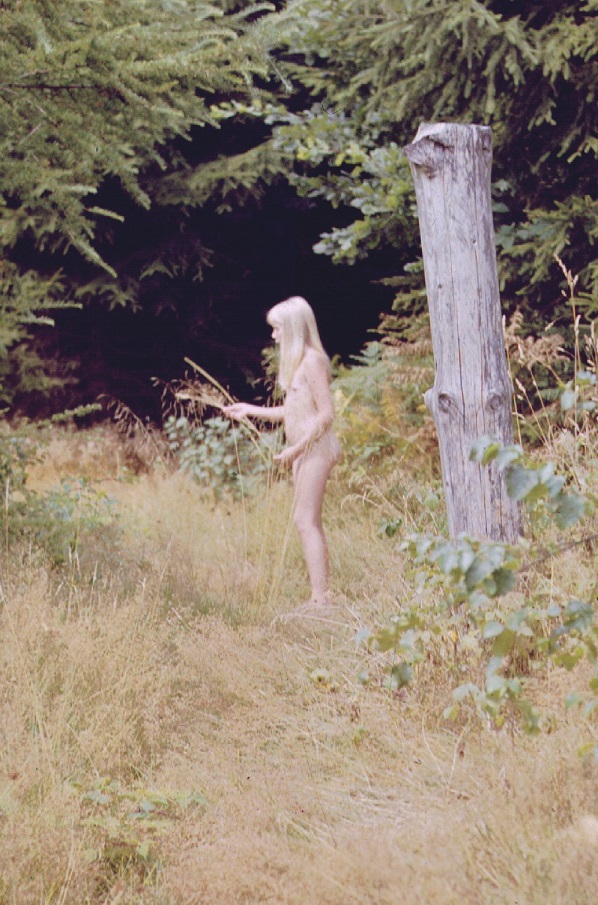 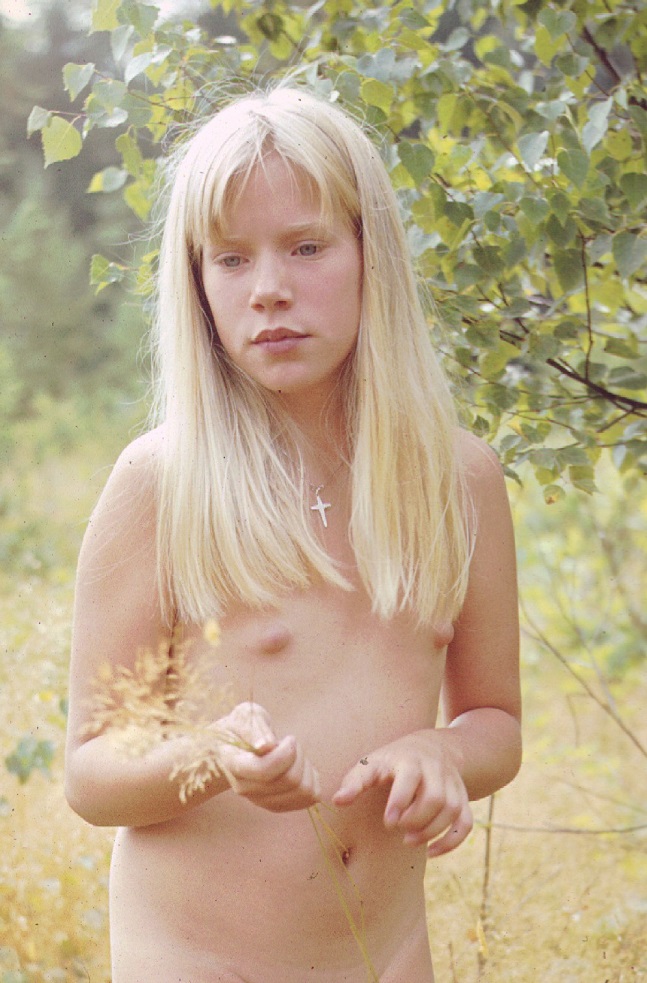 I am always concerned that with Pigtails’ focus on girls, that readers understand that many of the artists we cover also shot boys and so I include one of Otto’s here.

There is a lot more to be said about the distinctions between naturist photojournalism and studio “art” photography, but that will have to wait for another time.