I agree with Joseph Campbell’s contention that proper art is grounded in dream imagery. It does not pander to society’s conventions and challenges the viewer by reminding him of the vital power of the unconscious mind. Therefore, I was pleased to discover that the inspiration for this artist’s work was literally a dream.

As a young woman, Aurelija Čepulinskaitė (born 1974 in Trakai, Lithuania) had a dream of girls running down corridors in white clothes with the sunlight glinting off them. When she awoke, she persuaded her younger sister and one of her friends to go to an abandoned Soviet-era school and model for the shoot. Not satisfied with some of the preliminary results, she decided that bare skin much more effectively produced the effect of light she wanted and the “Summer School” series was created. 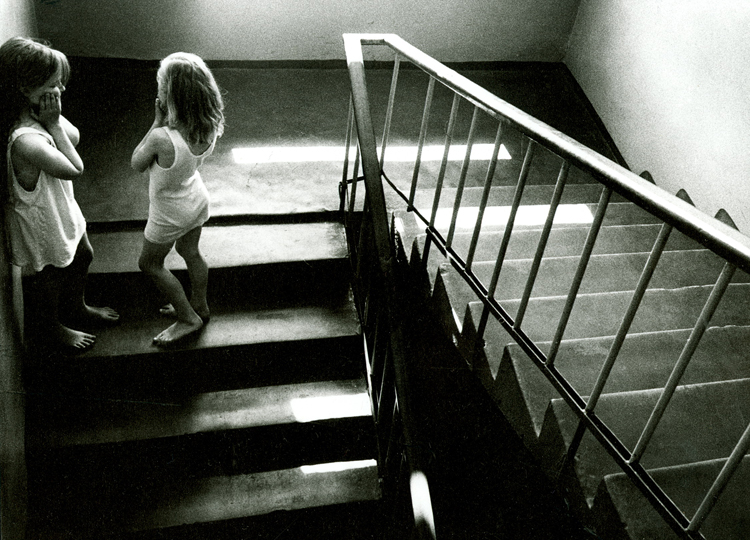 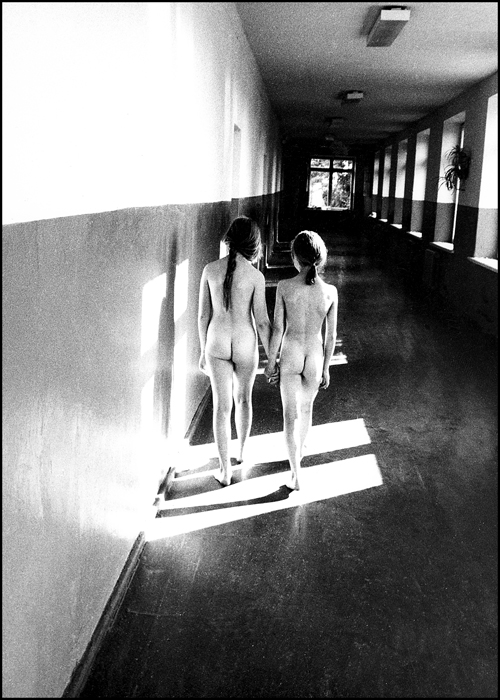 The artist had no idea at the time how innovative her work was or the broader historical context of nude and erotic art. After the fall of the Soviet regime, restrictions regarding nudity in a public forum were somewhat relaxed. A whole spate of Lithuanian photographers began to take the spotlight. Despite their wide range of portrayals of the human body, nothing could quite compare to Čepulinskaitė’s work. First of all, she was the only one to shoot such young models and was only 19 or 20 herself when she began this project. When Mathias Reuss visited Lithuania looking for photo erotica to publish, Čepulinskaitė’s name came up and her work was included in Body Vision: Lithuanian Nudes (1996) by Edition Reuss. 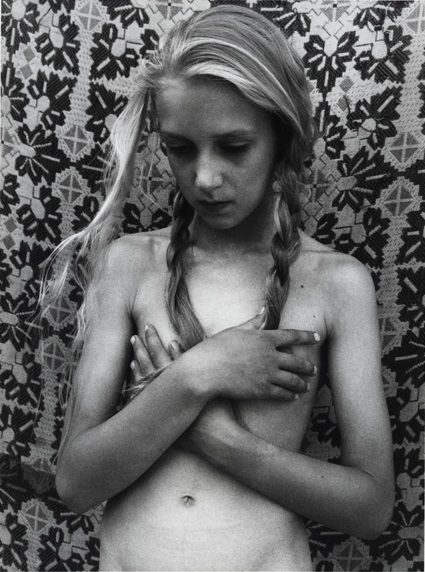 Perhaps the overriding point to this artist’s work is the honesty of the human body. By using young models in the throes of the awkward transition into womanhood, she captured the human body at its most vulnerable yet most truthful. But it is not an idyllic image. For the most part, it is fair to say that male and female photographers have different sensibilities when covering this subject and it seems what Čepulinskaitė accomplished could only have come from a woman. 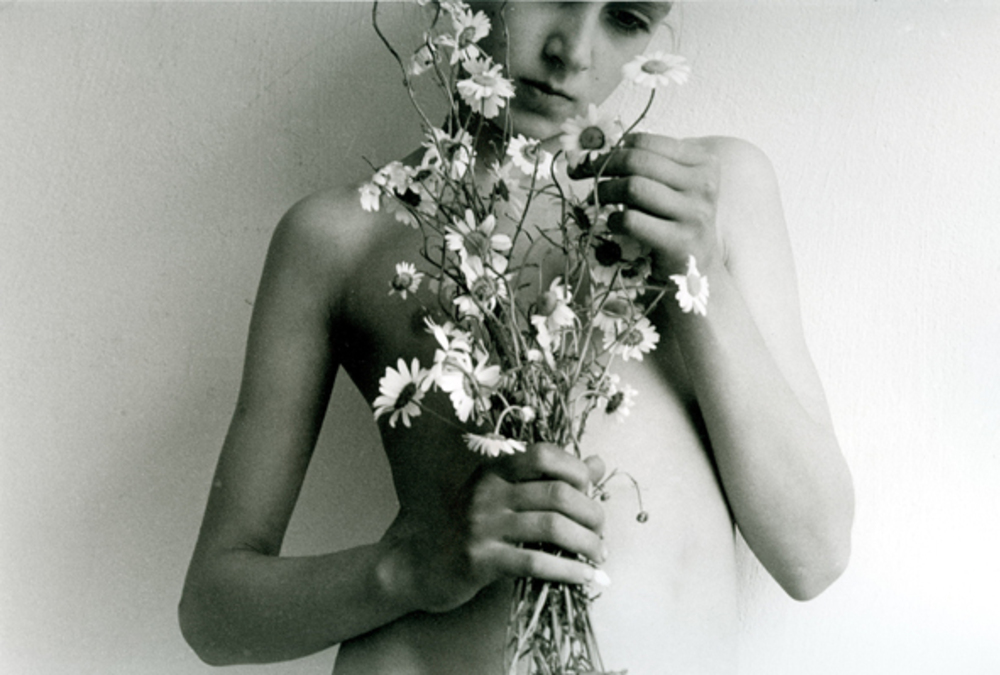 Violeta Bubelytė was the first to deny the stereotype of the woman as just a beautiful sex object and started photographing auto-erotica in the mid-1980s. The fact that the artist decided to record her own nudity was a bold step in Soviet society, which was bound to elicit accusations of immodesty. Initially, she hid her body under various layers or was crouched in the corner. Only later did the artist’s eyes start to look back at the camera—as if to openly subject herself to scrutiny and ask, “Who am I?” Her work denies the whole arsenal of poses of the sensual woman explored in the fine arts and throws off the mist laid by the male gaze, unequivocally stating the particulars of female existence. Naturally, these photos received angry comments as did those of Snieguolė Michelkevičiūtė, who started photographing aging, tired male bodies—a slap in the face of traditional art. With the increase of erotic photographic exhibitions, the days of hot discussion waned and an era of indifference began. In response, body imagery needed to be more extreme to be noticed. Asocial depictions of neglect and an absence of mental discipline began to appear (eg. Aleksandras Macijauskas, Rimaldas Vikšraitis). Photography, seeking to enter the field as the dominant art form, had to boldly explore the gross body as “flesh”—as a conglomeration of fluids, mucus, chemical reactions, exposing its traumas and death (eg. Svajonė and Paulius Stanikai). It seems the beautiful body had been relegated to the field of advertising (particularly that of Saulius Paukštys). 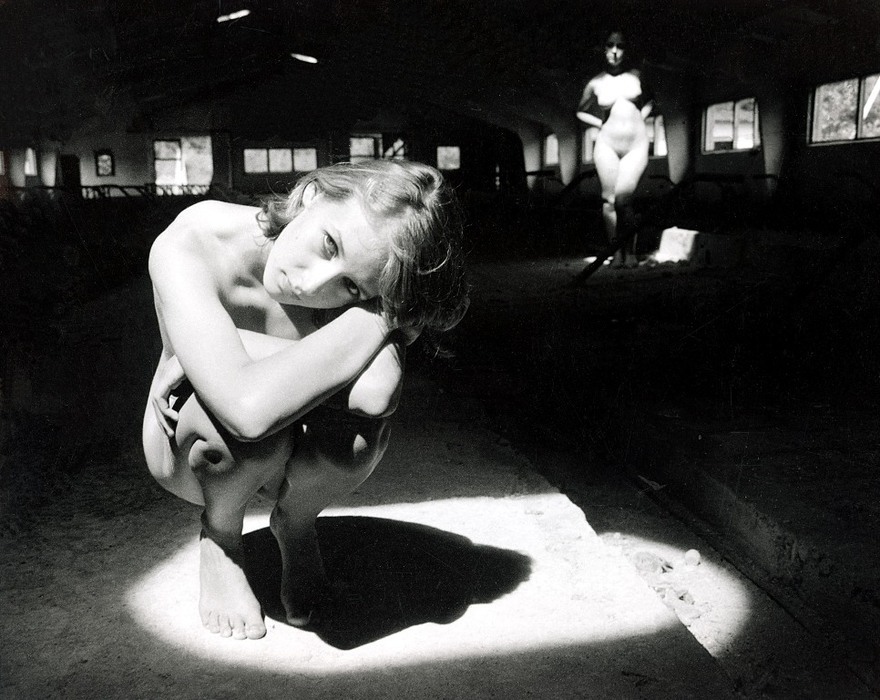 At the time, Čepulinskaitė was not aware that others abroad were shooting teenagers nude. She discovered similar work only when visiting Germany in 1995, especially that of Jock Sturges but, “he is too soft, delicate, looks at the girls as a man; he does not know them at all and always keeps a secret.” Perhaps it is impossible to reveal all the secrets of the body and human existence with photographs, but Čepulinskaitė gave it a concerted effort. Though photographs can capture the physical body, it was her hope that she could capture something of the psychological and spiritual as well. By observing the details of the developing body, she records the hints of its burgeoning sexuality and anxieties, its eagerness for freedom and its fear of it. Using her sister as one of the models, she could look through the lens at her alter-ego and explore her own true sexuality buried under years of habit and acculturation. It is as though she was rereading a long-forgotten diary. 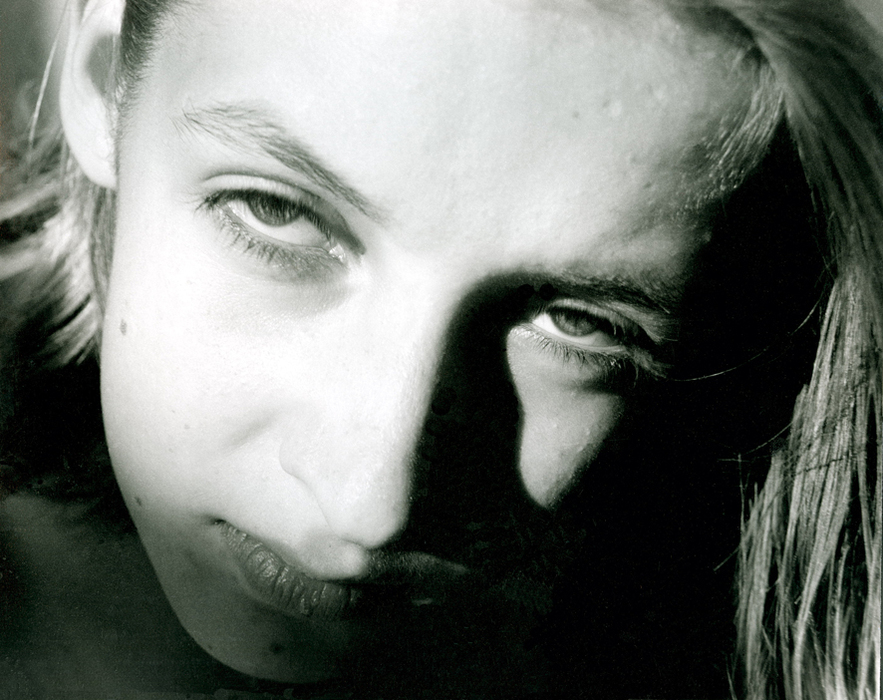 Another remarkable thing in her erotic photography is that because of her intimate relationship with the models, she could help them anticipate any concerns arising from posing naked in front the objective lens and thus channel her own anxieties from childhood. That rapport gives her images more intensity and—not being mere aesthetic productions—says something truthful and “real”. With one girl somewhat plump and the other skinny, her work did not conform to any feminine archetype. She does not conceal—under the guise of naturalism—that these girls are posing: performing strange, non-functional, reasonless actions and doing so with their young, developing, imperfect bodies.

There is a shocking dissonance in the images as the precious young body is juxtaposed against the background of a decaying building, eliminating the fantasy of a paradise of desire commonly seen in the polished medium of advertising. Three backgrounds were ultimately set against these bodies: an empty school (“Summer School”), abandoned houses (“Lost Houses”) and an abstract cellophane space (“Childhood”). All of these existed in concrete reality in the small town of Dubičiai in southern Lithuania. The school was the former kindergarten of the artist’s sister and was closed after the demise of the Soviet establishment. The ghosts of these backgrounds serve as a reminder of the old confining attitudes about the body with the young girls posing boldly in defiance. The signs of neglect are evident: the dingy wall, breakages and litter, old documents lying around and tattered tapestries. After completing her projects, Čepulinskaitė liked staying alone in these places, and by studying the scattered things, she created a series of color photos that became part of the “Lost Houses”. The cellophane staging of “Childhood” had special significance for her as it was on a hill where, according to legend, Bona Sforzra (1494–1557), the mother of Žygimantas Augustas—a 16th century king of Poland and Lithuania—had built a glass bridge. 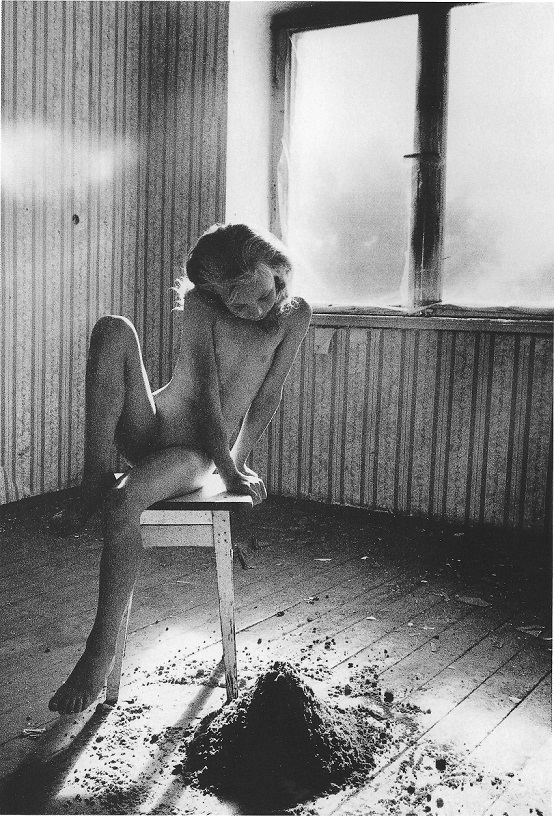 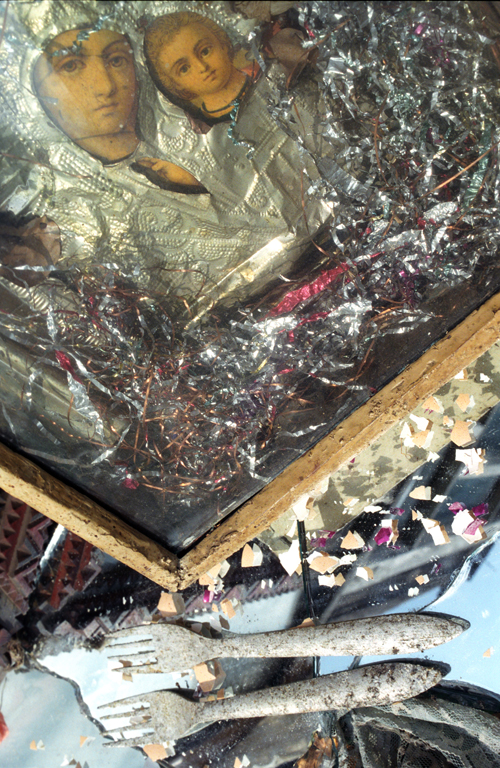 On top of these intriguing thematic counterpoints, there is the shock of light which gives the scenes their dynamism and makes the emotional expressions even more convincing, while the contrasting darkness is symbolic of the oppression a child might feel in such a stark institution. It was not just a matter of finding an empty place to shoot the girls, it was a way for Čepulinskaitė to “take her revenge on the school” and do something completely contradictory to its rules—to destroy its image. The order and the structure of the school denies the spontaneous dynamism of the body and everything related to it. The light also creates a feeling of danger and of dreamscape. The sharp cuts of the light transform and deform the body and attacks these naked bodies, accentuating their vulnerability. Another layer of danger is suggested by the very process of photographing. The artist photographed the forbidden images in public (albeit abandoned) places in the very center of the town. She often had to photograph furtively and very quickly, because anybody could have entered through the broken window at any time to see what was going on. In fact, the photo sessions were interrupted on numerous occasions giving the emotional expressions on the girls faces an added feeling of tension. 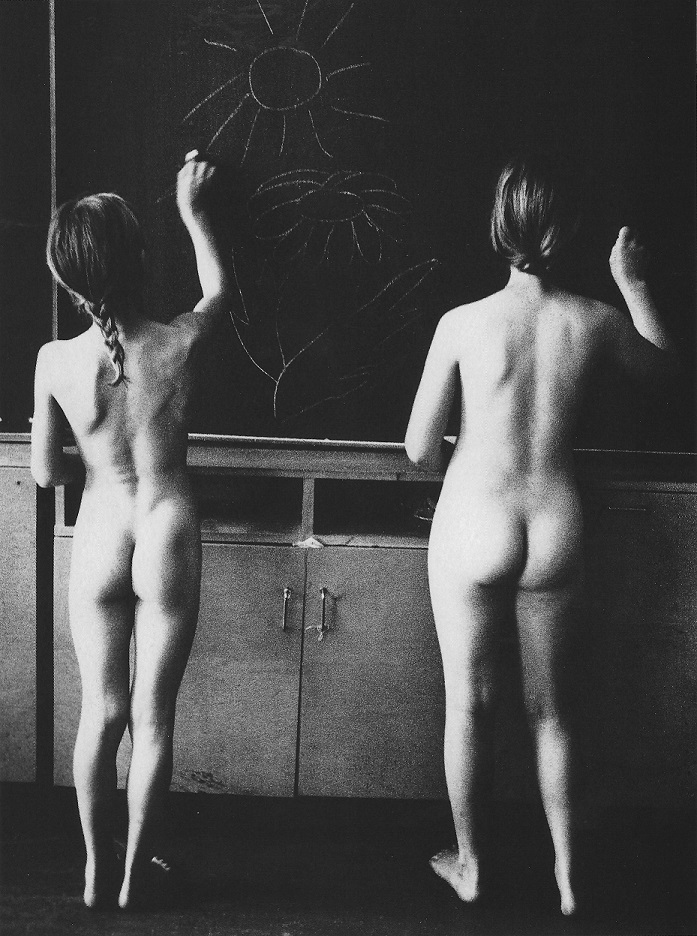 In the beginning, attempts to exhibit the photos were “dangerous” as well. Čepulinskaitė avoided showing them in Lithuania, because it would have caused problems for her models—being ridiculed because of the social stigma of posing nude. Photographing the teenage body does tend to trigger a knee-jerk suspicion of voyeurism and pedophilia as well. Here, being a woman and having a close relationship with the models was a great advantage. Her explorations can therefore be appreciated as legitimate examinations of the problems of sexuality, highlighting the unique female experience, exploring taboo sexual feelings and exposing the lie of male visual obsessions. This artist succeeds because she openly talks about her experience and bravely expresses the feelings evoked by her photographic diary under the scrutiny of the spectator. Čepulinskaitė was awarded the FIAP Gold Medal and other prizes for her series “Summer School” in 1998. 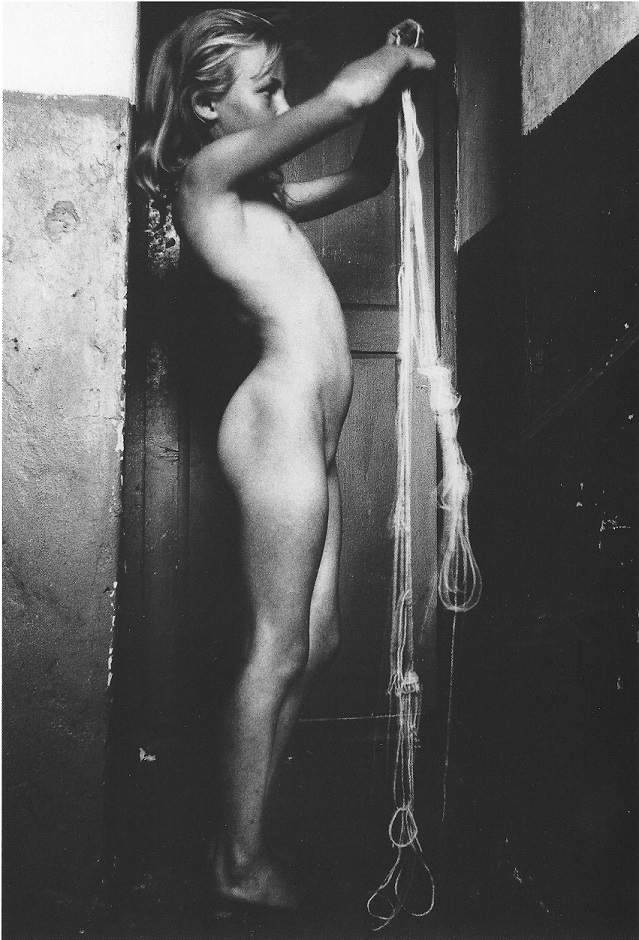 After producing these erotic series, Čepulinskaitė moved on to photo journalism, eventually becoming a photo correspondent for Lietuvos Rytas (Lithuanian Morning) in Klaipėda, Lithuania’s biggest daily paper. Lithuanian critics acknowledged her work only after her photos had received praise abroad. She studied photography and chemistry in Lithuania before marrying an American and moving to the U.S. She owned an art gallery, “Something Unexpected”, in New York for a short time and just completed a degree in architecture at the New York Institute of Technology. She has been working for an architectural firm in Manhattan for the past two years.  Her exhibitions included: “UFO” 1993, “Reflections” 1994, “Summer School” 1995-1998, “Lost Houses” 1998, “Britain through Young Lithuanian Eyes” 2001, “Meet Marina” 2002, “Cold.Hot.Iceland” 2003, “Green Mirage” 2007 and “After Death” 2007. 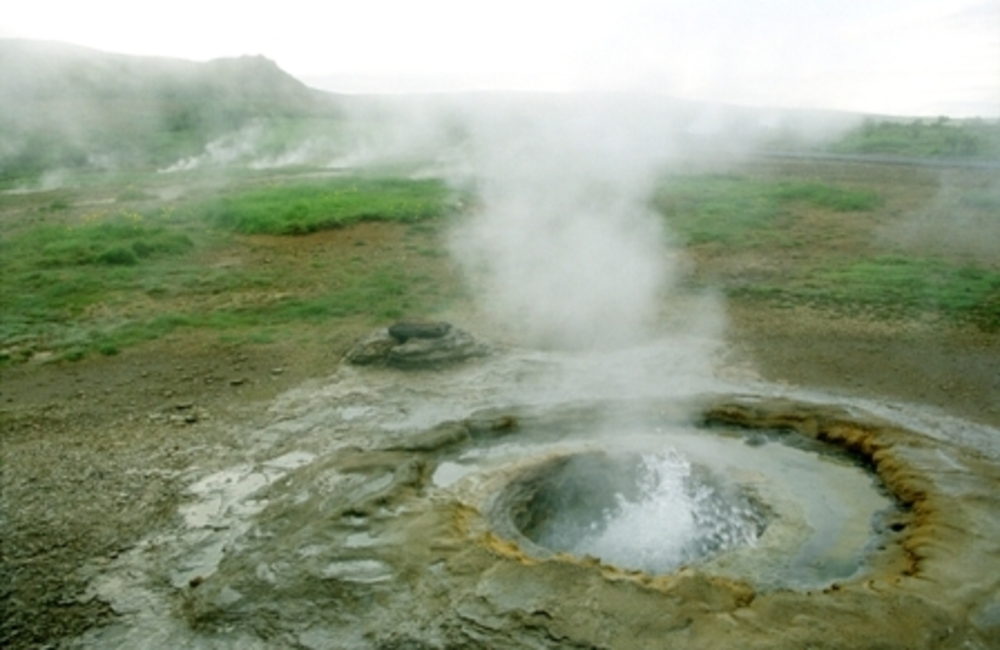 I would like to thank art critics Agnė Narušytė and Skirmantas Valiulis whose in-depth reviews—translated into English—were the basis for most of the information presented here. It was startling to discover how rich a culture had developed in such a specific arena in this relatively small country. For those considering owning a copy of Body Vision, the other featured artists are: Rimantas Dichavičius, Gintaras Balionis, Vitaly Butyrinas, Pranas Gudaitis, Alexsandras Macijauskas, Virgilis Šonta, Romualdas Požerskis, Violeta Bubelytė and Rolas Šimulis.

Due to some ambiguity in translation, there was some confusion regarding the names of the series.  The “Lost Houses” series could just as easily be translated into “Abandoned Houses” or “Abandoned Homes” which is the sense of the original Lithuanian name.  They are the same series with some images in black and white of the girls and some in color displaying a collage of abandoned objects.