A couple Christmas’ ago, I spent a week with my extended family including my nephews. The oldest was a pro at finding all kinds of interesting material online to entertain himself and it seemed he knew just about every comedian who was worth watching. As we browsed, I saw one who really stood out and after seeing some of his work, I had to conclude he was a genius in his field—although the artist himself would probably object to the hyperbole.

This stand-up comedian is a real artist and I do not make that claim lightly. Watching Louis C.K. was a revelation and I had hoped there would be some excuse to share him with Pigtails readers. I hit the jackpot; almost all of his material is autobiographical and as the father of two girls, he regales the audience with hilarious tales of his experience raising them. As a now single dad with shared custody, his observations of the mysterious behavior of girls is perfect fodder for his act. His frankness is almost shocking, but he is one of those rare comedians who can speak a kind of truth about the darker aspects of the human condition and in so doing strike a chord with a large audience. Not since Bill Hicks, have I seen someone so masterful and vulnerable on stage. Besides their bold frankness, a specific parallel between the two comedians is how open they are about masturbation. Hicks has been credited by many for being the first to talk about it in his stand-up performances but Louis C.K. actually fancies himself the poster child on the subject. I was surprised that Louis never mentioned Hicks as one of his influences, but I feel sure that Hicks’ career would have evolved very much like Louis C.K.’s, had he lived.

This press photo was part of an article on how standardized testing is undermining education and now affecting the girls, Mary Louise (after Louis’ mother) and Kitty. One of Mary Louise’s ideas was even used in an episode of Louie. 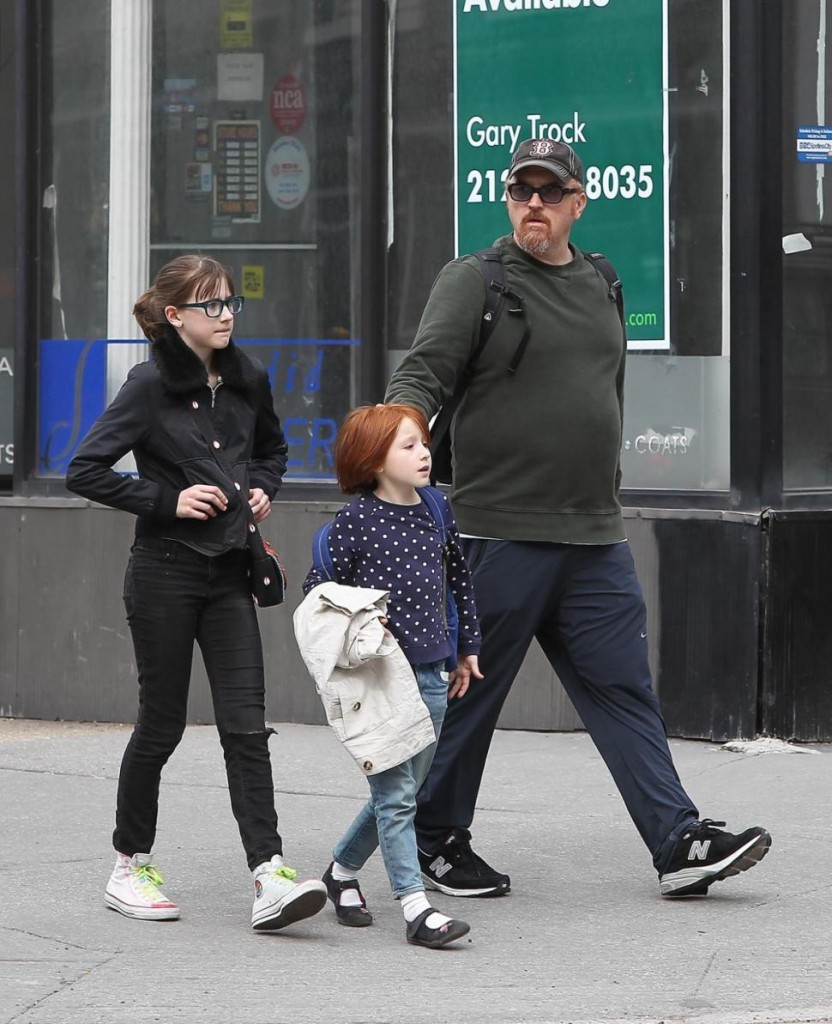 One of the questions people first have is about his unusual name. His name is really Székely and I do not know if he changed it in school or after he started to perform to make it easier on audiences to pronounce. (As it is awkward to call him C.K. here, I break with tradition and refer to him in this piece as “Louis”.) Louis was born in Washington, D.C. and only lived there until age one, when his family moved to Mexico City—his father was the son of a Hungarian Jew who emigrated to Mexico. They lived there until he was seven, so his first language is Spanish and he still retains Mexican citizenship. The family then moved to the Boston area and Louis decided he wanted to become a writer and comedian—being strongly influenced by Bill Cosby, Richard Pryor and George Carlin. He was angry that TV shows were so bad and he wanted to do something about it. After graduating high school, Louis got some experience working at a public access cable TV station in Boston which gave him some of the tools and technical knowledge he would use on his short films and TV shows. At the same time, he was trying to summon the courage to do some stand-up comedy and slowly, with years of practice, he became quite skilled and began to have a following. One of the things that helps him maintain that following is a principle that Carlin followed. Every year or two, he would drop all his material and start fresh. There are two clear advantages to that: first of all, loyal fans are not subjected to the same stale material, no matter how well-performed and, secondly, developing new material all the time forces the comic to maintain his creativity and skill.

Louis clearly respects real talent and hard work and as he learned the ropes of comedy, resented how difficult is was for new talent to get recognized while mediocre comedians were getting well-established. He also hated how—rationalized by concerns over intellectual property–companies made it hard for fans to get access to his work. After establishing a strong fan base, Louis C.K. decided to use his fame to try a new marketing scheme. Beginning with his 2011 Live at the Beacon Theater concert, he distributed his work digitally on his own website, forgoing both physical and broadcast media. For $5, a person can download or stream one of his acts, cutting out the middleman. He also sells reasonably priced tickets for his stand-up shows, creatively playing venues that aren’t part of the “big ticket” companies’ system. This gives the consumer the sense of a more direct relationship to the artist—with occasional personal-sounding messages about his latest efforts–and he uses his reputation to promote other artists he feels deserve wider exposure such as Todd Barry’s recent “Crowd Work” tour. This “business model” has since inspired a few others to do the same.

Louis created and starred in Lucky Louie, a sitcom on HBO which premiered in June 2006. The show was innovative in two ways: it was videotaped in front of a studio audience and a conscious effort was made to keep the set simple—modeled after The Honeymooners—to emphasize the show’s commitment to writing and acting. Unfortunately, the show was canceled after the first season. Pamela Adlon, who sometimes collaborated with Louis on stories, played the wife. The plotlines use some of the material Louis used in his routines about his oldest daughter when she was about 4. Here, Louie is having breakfast with Lucy (Kelly Gould). 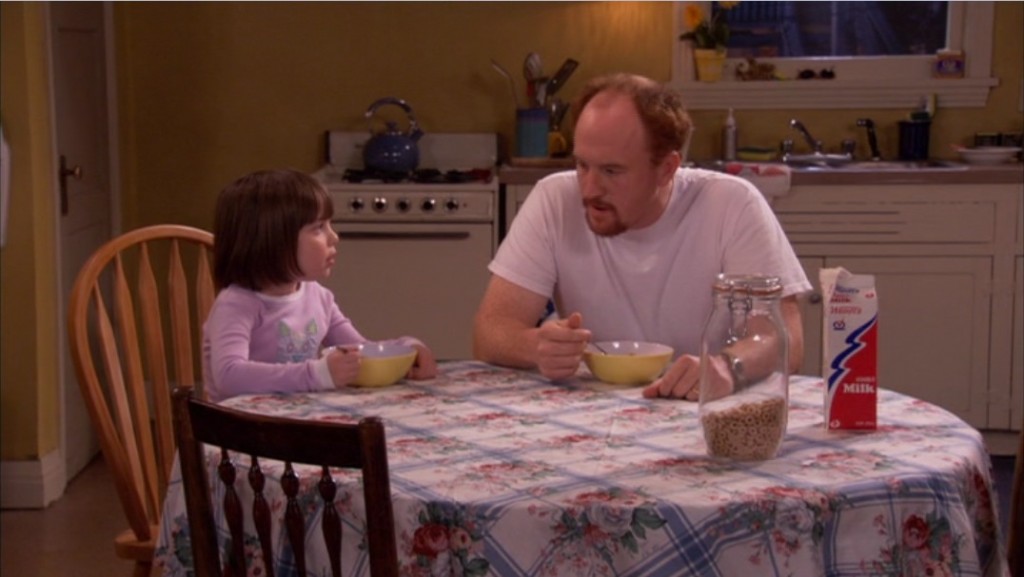 Naturally, Louis exaggerates to make the stories in his act more memorable and funny, but his experiences will strike a chord with most parents. There is an amusing character arc that happens with his older girl between two of his performances:

“…Parents make you love our kids because we dress them up and take them out and everybody goes ‘Ow, nice!’ but you don’t know what she’s like when she comes home and the dress comes off—fuckin’ rubs her ass in mud; she’s fuckin’ gross. She won’t fuckin’ take a bath…She stinks…rancid, stinky fuckin’ kid…” -Shameless (2007)

“I got two and the seven-year-old—she’s no trouble now. That kid’s amazing. She’s better than me. She’s smarter than me, she’s more decent, she’s cleaner. Like she comes out of her room [in the morning] all dressed with a little bow she’s like, ‘Hi, Good morning, daddy!’…” -Hilarious (2010)

Fortunately, Louis C.K. persevered and in 2009, FX picked up his new series, Louie, which he starred in—this time as a divorced father of two girls. To give him more creative control, Louis also wrote, directed and edited the show. Interspersed with the stories, the show is interrupted with segments of rough stand-up routines which give us insight into how his material develops before he tours; his edgiest and most outrageous material can be seen here. The show premiered on June 29, 2010 and also starred Ashley Gerasimovich (left, who played Jane for part of the first season) and Hadley Delany (right, who plays older daughter Lilly). 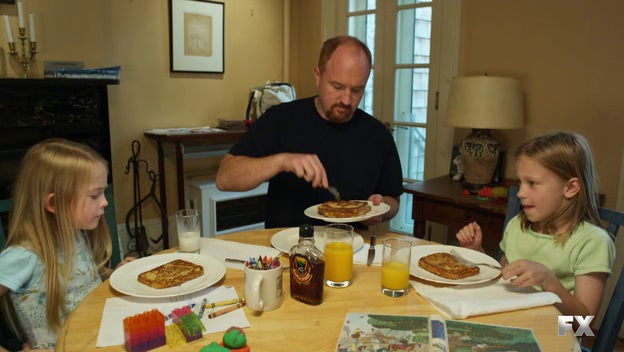 In the second season premiere, we see a scene between Louis C.K. and Ursula Parker (who plays Jane for most of the series) in a seemingly sweet intimate scene, but is really an illustration of a parent’s ambiguous feelings about his kids.

“…I love that kid to pieces, but I wish she was never born. That’s how it feels! At certain tiny moments, any parent who is honest will tell you that you live with that ambivalence…You look at the face of your beautiful, lovely child and think two things at the exact same time.” -Louie: Pregnant (2011) 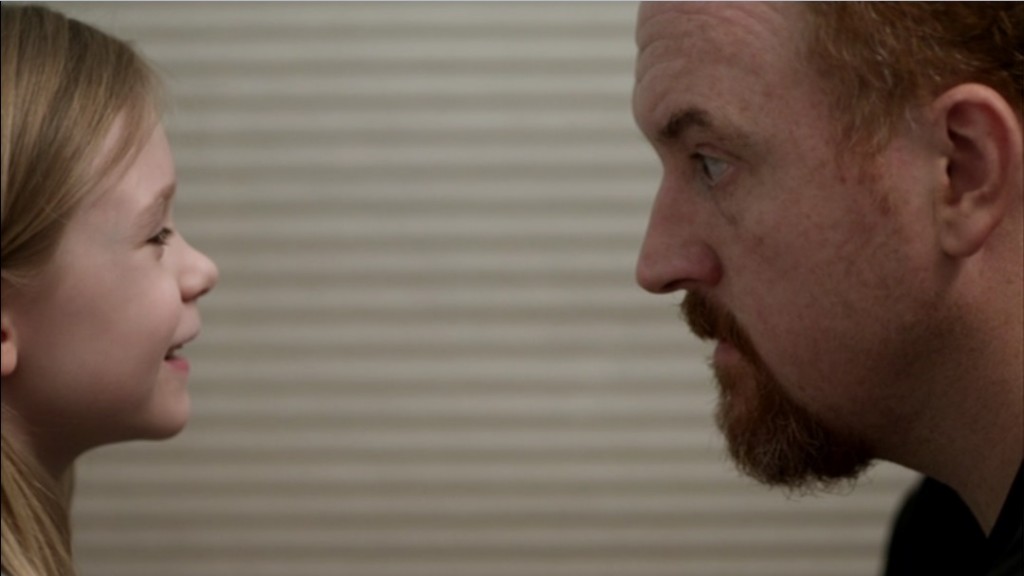 In his commentary on this episode, Louis explains how impressed he was with Parker’s performance. For such a young girl, she is able to pull off that exquisite sense of timing that Louis requires in some of the scenes. There is every indication that she is highly gifted and her parents involve her in gymnastics and music. Once during rehearsal, Parker was idly doing some gymnastic stretching exercises while getting direction from Louis and when he saw it, he could not stop laughing. He asked her to do it again as if out of the blue in a later episode. 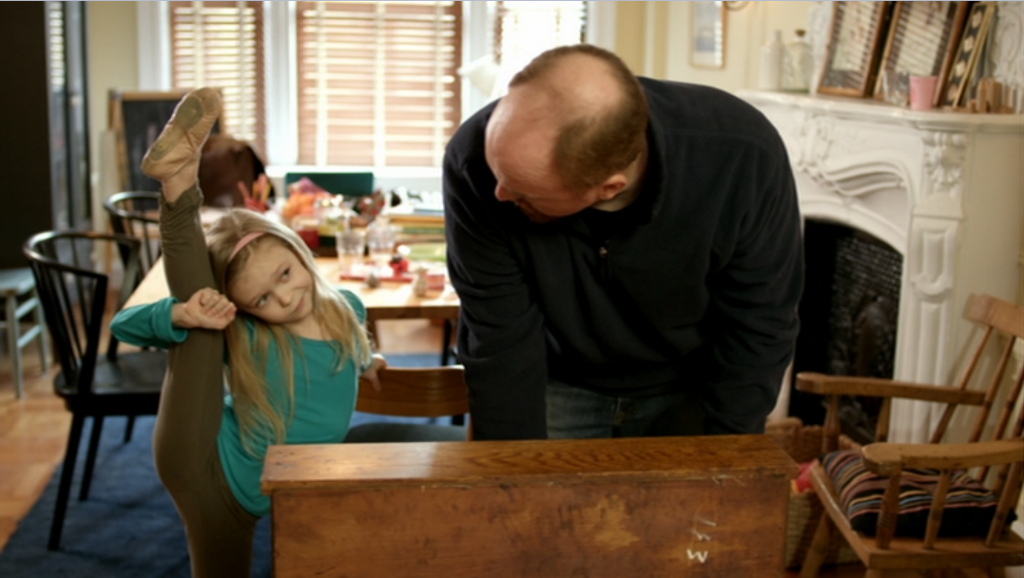 In Season 3, an opening scene shows Parker playing the violin beautifully. The joke is that Louie walks in and tells her to stop because it is not time for that right now, even though most parents would be happy to indulge a child who could do that. I play the violin and have seen some pathetic synch performances on TV and in the movies, but it appears Parker is actually playing this piece. 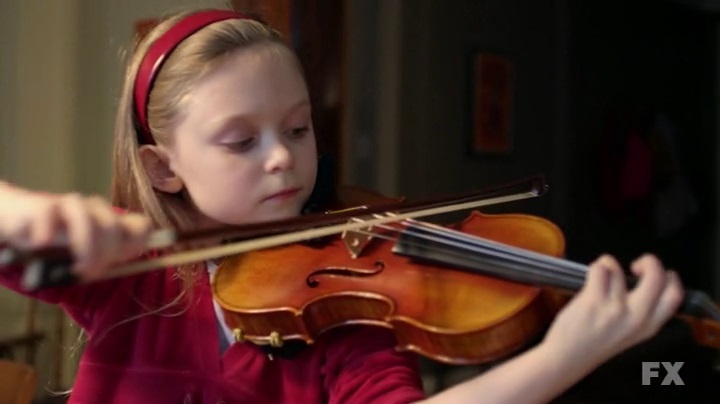 In Season 2, there is the awkward problem of how the older generation has no compunction about using the word “nigger”:

“I was reading to my kids the other night…I love reading to my girls…We were reading Tom Sawyer…Mark Twain, great writer…beautiful writer and I picked Tom Sawyer, not Huckleberry Finn, because Tom Sawyer is a nice kid…Huckleberry Finn is a dirty little homeless white trash creep and the main problem is that he won’t stop saying ‘nigger’…I can’t sit on my daughter’s bed and just say ‘nigger’ all night and just put her to sleep…” -Louie: Country Drive (2011)

Louie wants to buy the perfect gift for his older daughter Lilly and even after all his efforts, he can only manage to get this polite show of enthusiasm by the end of the show. 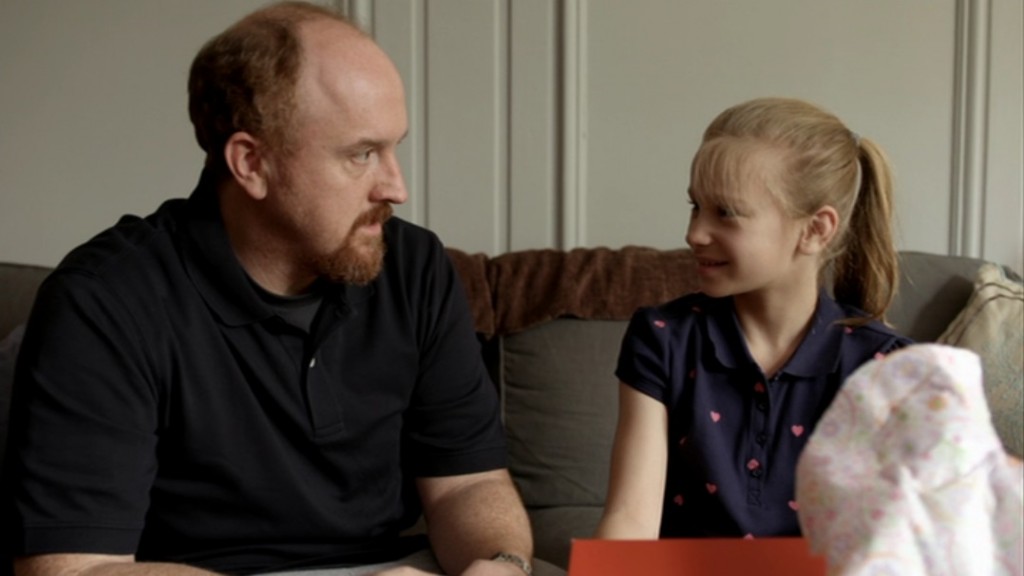 After Season 3, there is a 19 month gap as Louis C.K. became engrossed in other projects, but the show has since resumed.

Louis C.K.’s experience with producing a TV show even provided material for one of his funniest observations. In one of his tours and as a guest on Conan, he talks about this weird scene in Schindler’s List (1993) with a little girl who contemptuously says, “Goodbye, Jews!” The problem is that that kind of performance does not come easily to a little girl, who will probably come off too cute. Louis figures it must have been funny watching the auditions of all these girls trying to get it right. I was curious about this scene and found the clip so you can judge for yourself.

Another favorite comedian of mine is Kevin Hart, who also has funny stories about his daughter, Heaven. One of the things that surprised me is that his agent is Dave Becky, same as Louis C.K.’s and now I have discovered that he also represents Bill Burr.  I cannot help but think that Becky really has his finger on the pulse of smart, hard-working comedians.