A friend of mine recently informed of an interesting documentary she saw, A Letter to Elia (2010), about movie director Elia Kazan (1909-2003). Martin Scorsese was one of Kazan’s most devoted fans and produced this heart-felt tribute of the man who so greatly influenced his career. Films like On the Waterfront (1954), A Face in the Crowd (1957), East of Eden (1955) and especially Wild River (1960), which Scorsese believes has not gotten the recognition it deserves, profoundly shaped the director’s understanding of filmmaking. Kazan’s special appeal was that he directed films about ordinary people engaged in interpersonal drama that are genuine and typical moviegoers could relate to. The success of these films paved the way for a new generation of directors. Kazan’s directorial debut was a film called A Tree Grows in Brooklyn (1945) showcasing a remarkable young actress, Peggy Ann Garner. I expected the movie to be just an interesting diversion, but after seeing it, I decided it needed to appear on Pigtails.

There is a kind of attitude many adults have about children that they are somehow second-class citizens, so that only in rare cases—like Shirley Temple—does a child ever get top billing. But make no mistake, Garner—who played the role of Francie—was the lead in this film. The story, based on Betty Smith’s novel, centers around Francie’s relationships and experiences. Even the introduction refers to the special status that Saturdays have for children who, without the obligations of school or church, get a kind of holiday every week.

Francie is the elder of two children in the Nolan family—poor but hopeful for a better life. She and her brother Neely (Ted Donaldson) are portrayed as charming street-wise grifters who provide some income for the family. I thought this was handled well because it conveys how children are often more capable and aware than the adults around them believe. Here Francie and Neely are lurking around a street vendor selling Christmas trees. Any trees that are not sold by midnight Christmas Eve are given away. The kids were lucky this year bringing in an especially large tree to the delight of the family. 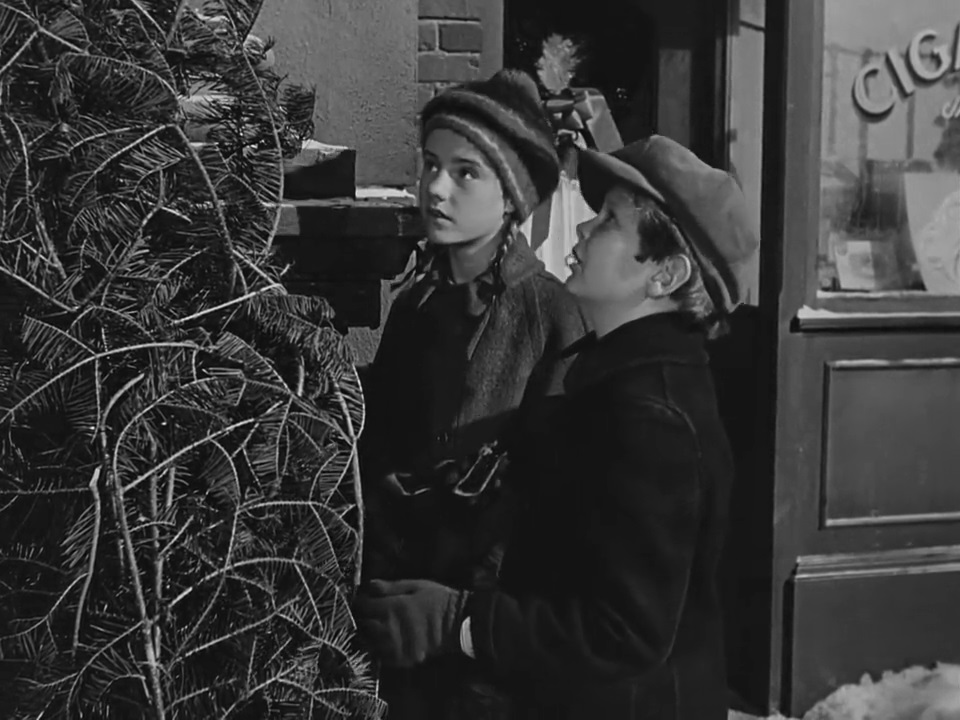 Francie’s relationship with her mother Katie (Dorothy McGuire) is somewhat pragmatic and cold and here she is getting advice and instructions about some family errands. Katie’s dilemma is that she has to be strict about the family’s income and how they use money, but she is deprived of the uninhibited enjoyment of life and family.

Here mom and kids are with an insurance man who comes by once a month to collect premiums. With her sense of propriety, Katie makes these payments a priority in case, God forbid, any one of them might die; at least they can then count on a decent burial. 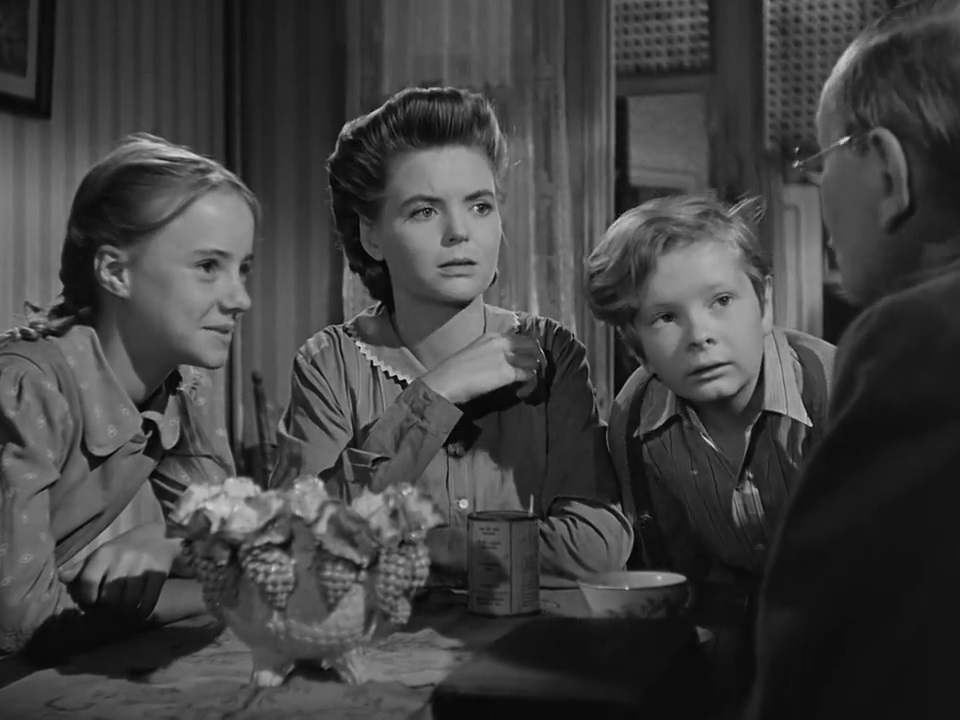 Francie’s relationship with her father Johnny (James Dunn) is special. Unlike Katie, Johnny is a dreamer and fast talker who gets inconsistent work as a singer and waiter. Francie’s love for her father is based in part on his hopeful and fanciful tales of how the family’s ship will someday come in. That day, a tree across the street—the one referenced in the novel’s title—has been severely cut back. After the shock of hearing the news, Johnny tells Francie—whose pet name is Prima Donna—that this tree, which managed to push itself through the concrete, will recover better than ever. The tree serves as a symbol of the family’s resilience and determination. 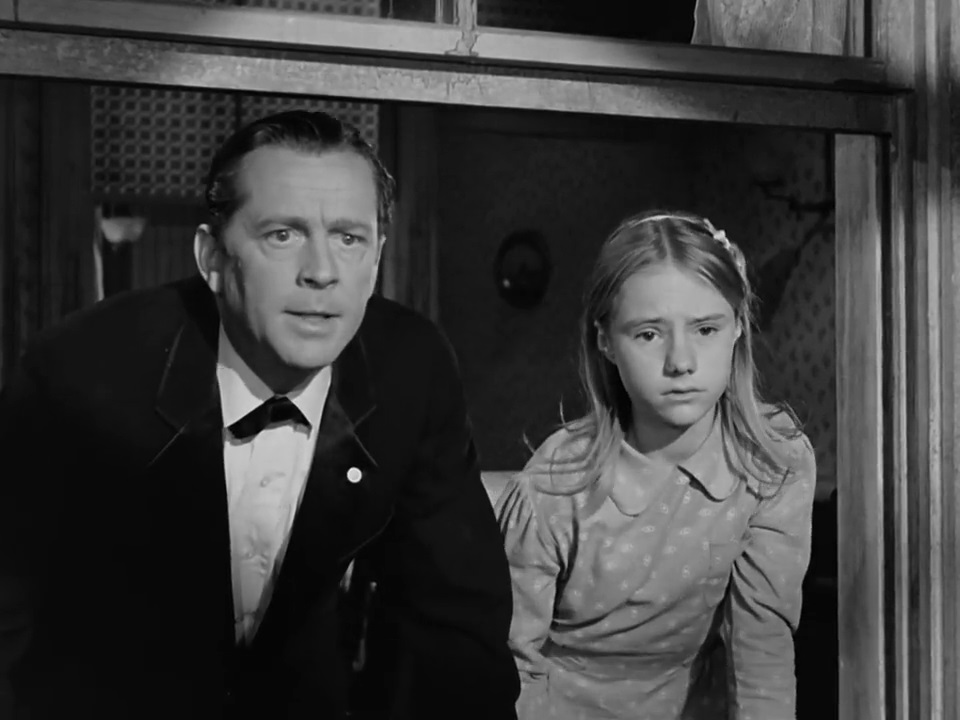 In contrast to Katie’s concern for propriety, a family across the hall has decided to buy their little girl Flossie (Susan Lester), who is terminally ill, an expensive dress instead of paying for funeral insurance. Here she is showing Johnny her new silk dress. Johnny in his upbeat manner insists that he is not fooled; it is really made of “flower petals and birds’ wings and a little old piece of cloud”. 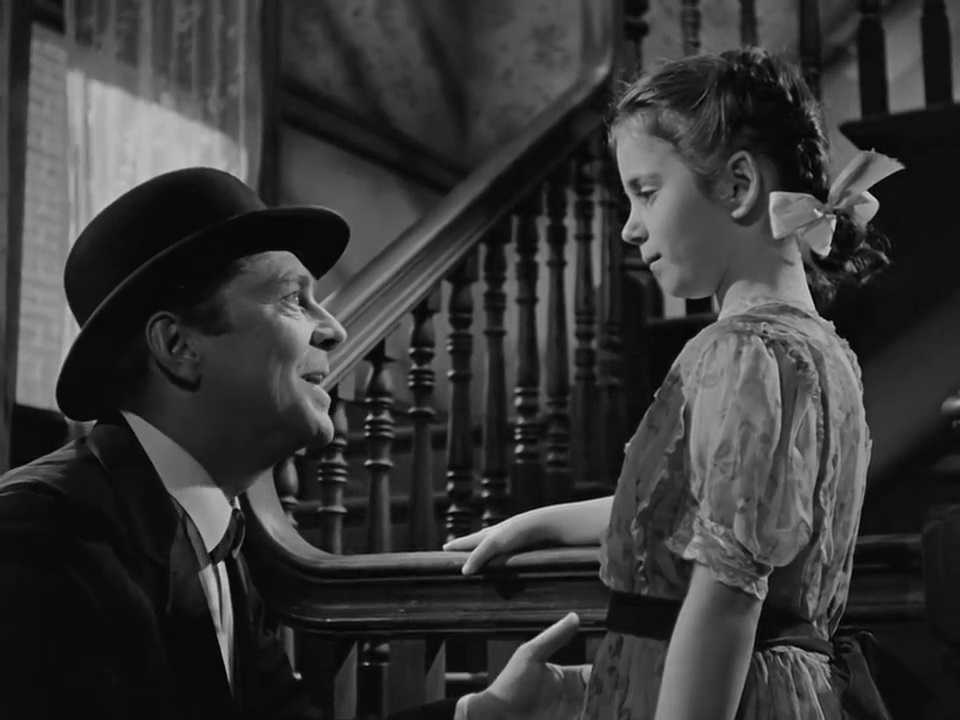 The kids are also very close to Sissy (Joan Blondell), Katie’s older sister with a propensity for taking up with men. She gives Francie advice on how to handle her mother and the boys who are certain to take an interest in her some day. 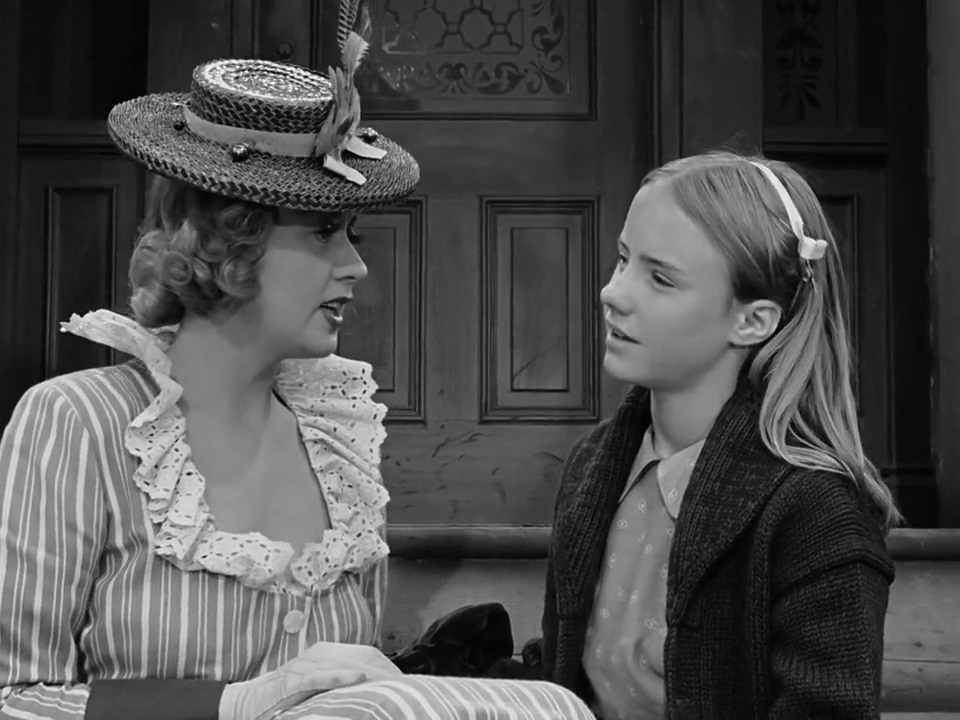 After learning of Katie’s pregnancy, Johnny—out of a sense of guilt for not being a better provider—waits all night in the cold for an employment opportunity and dies of exposure. Francie subconsciously blames her mother who attempts to remedy things by helping her fulfill her dream of graduating from school.  In circa 1925 Brooklyn, mandatory high school attendance was not yet universal. Here she is seen graduating—wearing a new dress of her own. 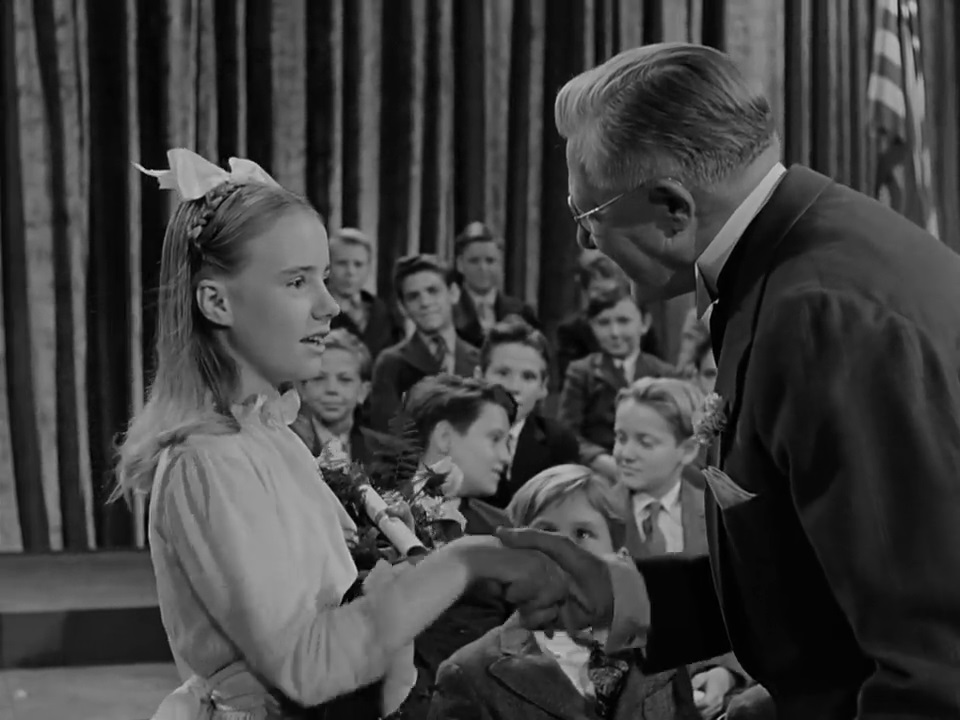 My favorite scene takes place just after graduation when the family treats themselves to a meal out. An older friend of Neely’s shows up and is introduced to Francie by Aunt Sissy. The boy promptly and awkwardly asks her out and we get this priceless expression from Francie. She manages to remember Sissy’s advice though and composes herself so she does not appear too eager. 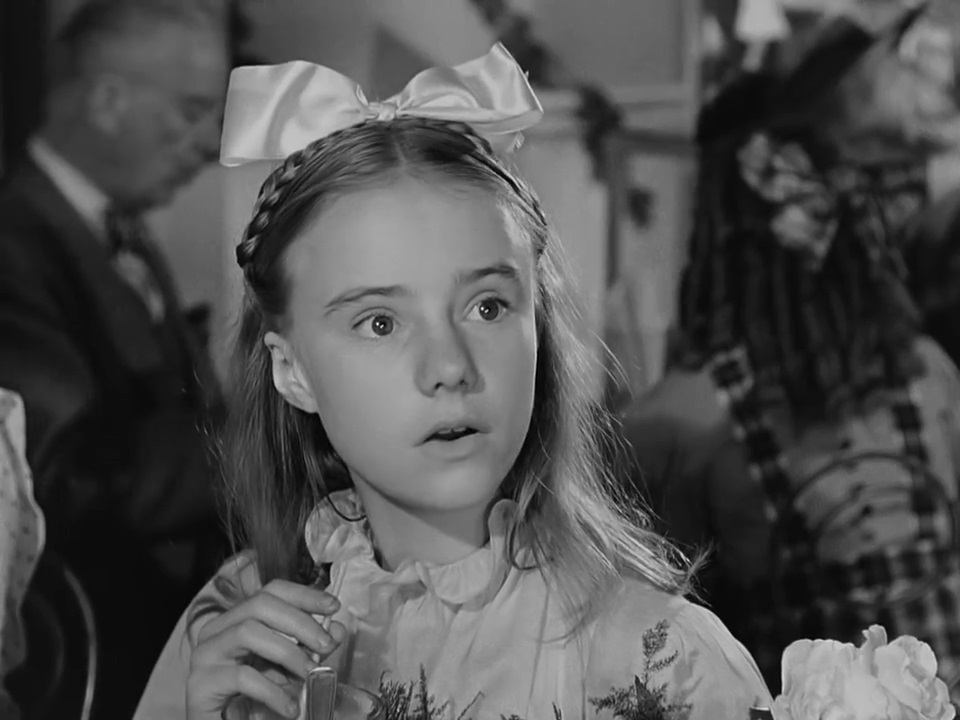 I was really impressed by Garner’s performance. Not only did she have to remember a lot of lines, but her body language and facial expressions were excellent and well-grounded in the Method. Garner began modeling and acting at a very young age and by age 12, she had already became quite expert. She went on to perform on Broadway in the 1950s and won an award for her acting but at only age 52, this remarkable woman died of pancreatic cancer.

I recently read a review of the novel on which this film is based.  It appears that one of the influences of Kazan is to masculinize the story.  Apparently in the novel, it was all about the relationship between Francie and her mother.  The father was pretty much in the periphery.  Kazan’s desire to emphasize the role and experience of men caused him to give the father a more prominent role as the parent who understood Francie and to push the girl to her full potential while making the mother the “proper” parent promoting a kind of alienation between mother and daughter. [150807]