It has been confirmed that the Glenice referred to on the porcelain plates in this series (and other similar series) is, in fact, Glenice Moore.  A publicity photo of Moore confirms her association with the company producing these collectibles.  [160514]

The rhetoric about child nudity reminds me a little of the metaphor of glass half-full versus glass half-empty people; which are you? Like most people, I purchase things that appeal to me and I do not always understand why at first. This was the case with a decorative plate entitled Amber. Serious art critics might derisively refer to this as kitsch and pay it no heed, but the fact that a particular style gains popularity says something about our psychology and our society and should be examined. I eventually realized that what intrigues me about this piece is that on the one hand, the girl shows a lot of bare skin, but the parts that are covered are actually quite dressy: nice frilly panties and proper dress shoes and socks. Her golden hair is also impeccably groomed with ribbons neatly tied into bows. It is clear from this state of affairs that she is getting ready to go out and is only one garment away from being fully dressed. She simply needs her dress to be slipped on over her head. 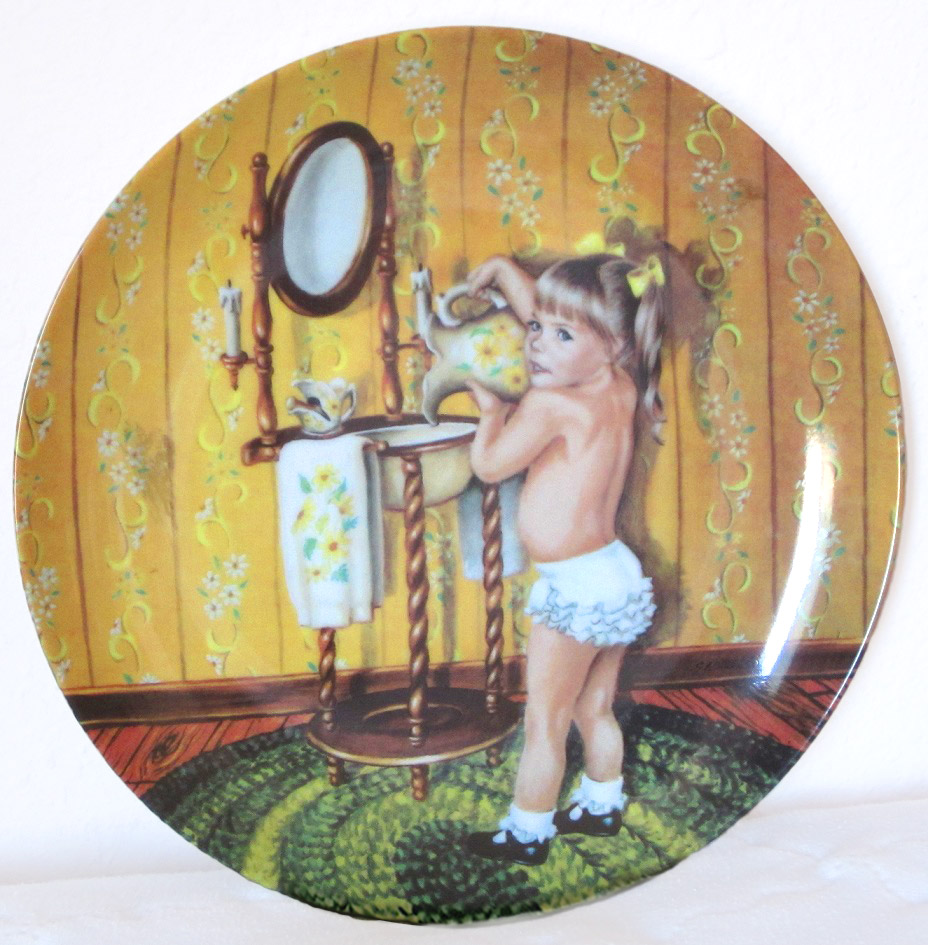 This piece was released by R.J. Ernst Enterprises, Inc. as part of “The Yesterday’s Series” in 1982. The plate refers to the artist simply as Glenice but it is probably Glenice Moore, a renowned painter and instructor who has had her work appear on at least 35 collector’s plates to date. It seems Amber was especially popular which may have prompted the company to also produce a figurine based on that image. There are at least three plates in this series but the quality of the online versions are too poor to show here. Anyone having good pictures of these plates is encouraged to come forward and share. All three deal with children in the intimate setting of their toilette in days past. Amber takes place at a time before indoor plumbing evidenced by the wash basin she is using. Elmer is about to pull the chain on one of those old-fashioned toilets and Katie has completed her bath in a metal tub strategically placed by a wood-burning stove. I would love to learn more about the story behind the commissioning of these pieces.