I intended the next Soviet postcard to be a beautiful nude by Zenaida Serebriakova, but then I realized Pip did an extensive post on that artist a while back. So, before moving on, why not take another look at it here?

Instead, as we notice the weather warming up here in the Northern Hemisphere, the following image is quite apropos. I could not find much on this artist (see note below) except that she clearly did a number of images promoting the pleasures of Soviet life. The title of this piece translates to “It’s hot!”. I noticed that this, like many color photos from that era, create the impression of a watercolor. 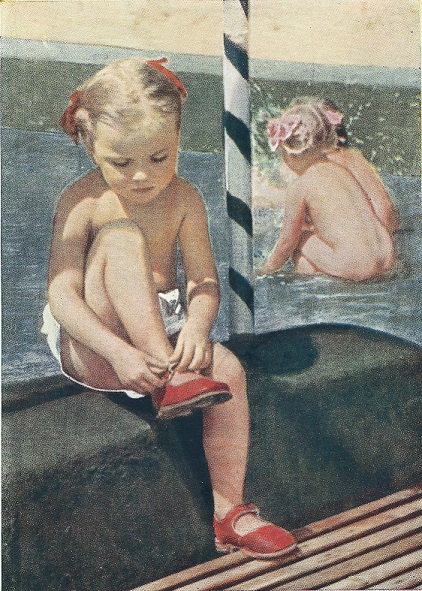 Update: Thanks to some digging by one of our helpful readers, Vasya, I now have a better idea about this artist.  He believes she is Elizaveta Ignatovich (Елизавета Игнатович), a sister of Boris Ignatovich, a major Russian photographer associated with Constructivism.  They along with their two sisters, Olga and Elena, were members of the art group “October”, headed by Alexander Rodchenko (I will have posting more on him at a later date).  Only one page was found about Elizaveta Ignatovich which simply states that she was a sister of Boris, created New Year’s postcards and was married to Kiril Dombrovsky, science fiction writer, director and scriptwriter of popular films.  You can see more of her work with girls here.  There are also a couple other series online featuring her work (along with other artists) with English captions here. Boris Ignatovich also shot some pictures of girls (here and here), but his most iconic image is one of Mamlakat Nahangov with Stalin (1935).  She was a 11-year-old Tajiki girl who was awarded the Order of Lenin for her great achievement in harvesting cotton and most school children would have learned about her while being taught Soviet history lessons at school.  You can read more about her here.