Once again, this is part of a collection of Russian postcards. These along with the one in the Réti post and the Otto Lohmüller post that follows seem to have been printed by the same company. When I first saw these, I initially took them to be photographs but, as is so often the case, there is some intriguing story behind them. The artists of the first image are not credited on the postcard and clearly it is a (perhaps patent) metaphor for youth with the overly-luscious strawberries. In northern regions, strawberries are a significant herald of spring as they are the first fruit to appear after winter dormancy. Ingmar Bergman employed this symbol in the film Wild Strawberries. This postcard is one in a series called “Russian style” .

Thank you once again Vasya for pointing me in the right direction.  I found a better version of the image above so I have posted it here instead.  -Ron

The original incarnation of this post only contained the image above, but Pip pointed out an interesting work featuring Eva Ionesco and Martin Loeb who acted together in the film Maladolescenza (1977), controversial for its romantic portrayal of adolescents (more on Ionesco and this film in a future post).

And to round out this post, there was another image (my apologies for it being so small) that caught my eye and is well worth presenting. 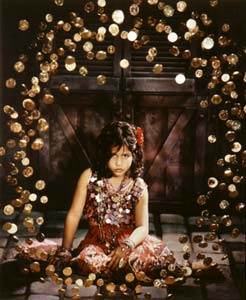 As always, if anyone can provide proper titles and/or dates to these works or a better version of these images, the effort would be much appreciated.