As you may have guessed from his name, Thomas Couture (1815-1879) was not a Soviet artist. In fact, he had come and gone well before the Bolshevik Revolution. The reason one of his works appears on a Soviet postcard is that it is one of a massive collection of art works housed at the State Hermitage in St. Petersburg, Russia.  Pip already did a post here featuring this image, but I wanted to add this supplementary information.

The State Hermitage (Госуда́рственный Эрмита́ж) is one of the largest and oldest museums in the world, founded in 1764 by Catherine the Great. Its collections currently comprise over three million items, including the largest collection of paintings in the world. The museum also boasts several exhibition centers abroad. There is quite a bit online about this institution including video, but you can find the most general information here.

This piece translates as “The Little Bather”. 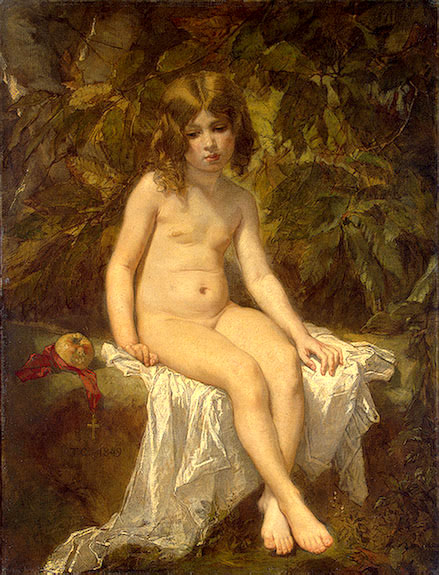 It is apropos that Thomas Couture’s work should be so highly regarded by a foreign institution as he always felt he was not adequately recognized for his innovative technique in his native France. Once he became a success, he opened an independent atelier, accepting his own students, in an attempt to challenge the École des Beaux-Arts. In 1867, he published a book on his own ideas and working methods. You can read more details here.