I am pleased to present another submission from one of our guest writers, Ami. It is a challenge when editing someone else’s work to preserve the style and personality of the contributor while making sure the language is concise and clear. It is because of the dedication of fans like Ami that Pigtails can offer a broader perspective than Pip and I could by ourselves. Although we may not completely accept the world view of any particular writer, I think Ami’s contribution is worthy of exposure on this site. Enjoy, -Ron

Banksy is maybe the only graffiti artist ever to achieve household name recognition. His anonymous anti-establishment black & white stencil pieces have been spotted around the world. He boasts legal exhibitions, with his stuff going to people like Kate Moss and John Travolta for upwards of a quarter-million pounds, and there’s a movie about him: Exit Through the Gift Shop (2010). 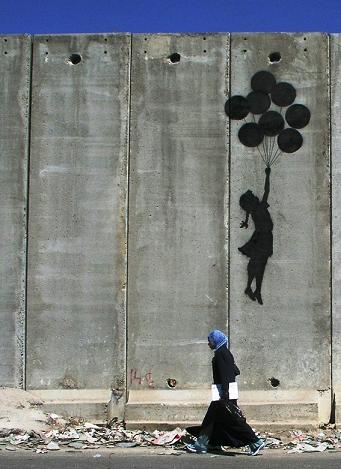 Totally subaltern, it makes sense that one of Banksy’s landmark pieces is of… a little girl—the most hard-core rebellious tag that any subversive could identify with. So it was very apt, when on August 5th, 2005 the Global Community awoke to find a little girl had appeared, written by Banksy, on the 700 kilometer Security Barrier that is rapidly dividing the pariah Palestinians from the Israelis. Braided—maybe an allusion to Astrid Lindgren’s little anarchist heroine Pippi Longstocking—the small girl holds on to eight balloons that lift her off. She has an almost impossible lightness in a place noted for being very weighty, in a sometimes heavy world.

Another artist has also tweaked the graffiti art genre to achieve some legitimacy for the otherwise criminal art. Kevin Peterson, based in Houston, Texas, transferred wild-style scripts, tags and “bombed-out” urban spaces to canvas, and used it with corrugated metal as a background for the wickedest rebel icon: little girls… posing, strolling, gently smiling or just chillin’. 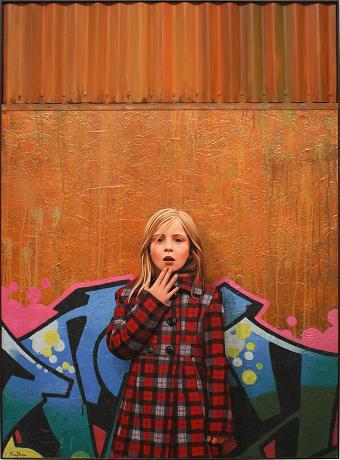 Kevin’s style is photo-realistic, causing one critic, Arseny Vesnin, to compare his work to Jacques-Louis David. The exquisitely rendered and vivacious little girls against a backdrop of rough street-art, urban decay and industrial metals offers a big contrast between the purest innocence and the trashiest breakdown. Kevin writes:

“It’s about growing up and living in a world that is broken. These paintings are about trauma, fear and loneliness and the strength that it takes to survive and thrive. They each contain the contrast of the untainted, young and innocent against a backdrop of a worn, ragged, and defiled world.”

Kevin describes himself in an interview with Michelle Markelz as having a soft spot for kids and it shows. We can easily tune in and empathize with the inner worlds of the girls in his figurative foregrounds. Each girl is solo, alone on the canvas, sometimes melancholy with perhaps a few hesitant smiles. Kevin says, “My work deals with isolation, loneliness and longing teamed with a level of optimistic hope.” 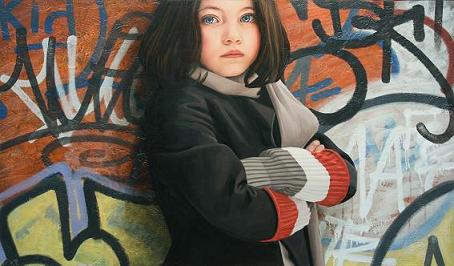 “Issues of race and the division of wealth have arisen in my recent work. This work deals with the idea of rigid boundaries, the hopeful breakdown of such restrictions, as well as questions about the forces that orchestrate our behavior.”

Recognizing his precise vision of innocence juxtaposed against hardness, Kevin makes reference to Banksy’s iconic Security Barrier girl many times in his work. 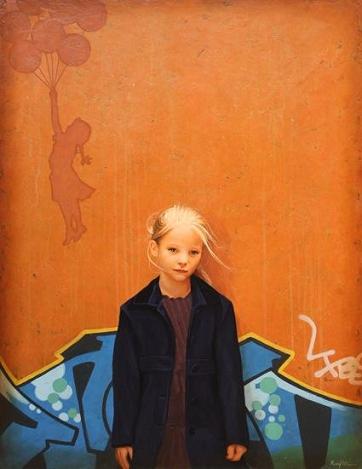 “A person who decides to go out and paint illegal graffiti and ‘deface’ other people’s property was once an innocent child as well but something happened along the way and they developed into someone who was willing to break laws and social norms to express themselves in such a way.”

…And sometimes that person who is willing to “break […] social norms to express themselves” still really is a child! If the image of a small graffiti girl is rebellious, a lil’ girl who writes graffiti must be revolutionary… 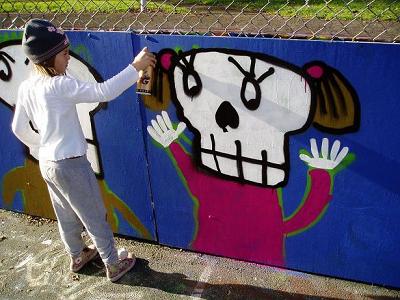 Called the “New” or “Female Banksy” by British media, the ten-year-old schoolgirl Solveig Barlow writes legally on wastelands around her Brighton home. While supported by her (magazine) writer father Paul and mother Heidi, she isn’t coached by them. Speaking of her muse Solveig told The Sun, “I’m not sure where I get my inspiration. I must just have a good imagination.” Solveig, which means “sunbeam” in Norwegian, uses SOL as her tag. 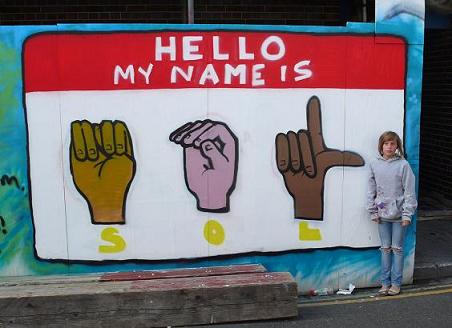 In the spirit of Banksy a year-and-a-half earlier, SOL gets up to the Berlin wall.

Graffiti is a subversive art—frequently anonymous, the expression of the alienated and disaffected. Its messages tend toward anti-establishment in form and content. But the most dissident piece or artist of all, turns out to be… the little girl. 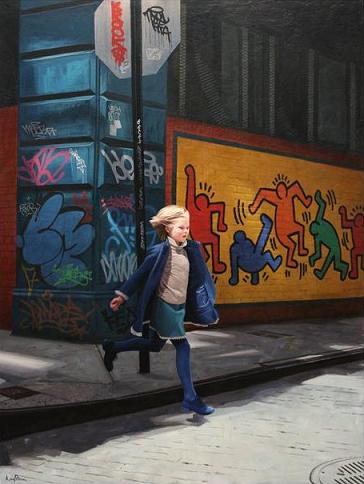 Kevin Peterson – Into the Light

Out-of-doors artist and social activist Keith Haring’s “radiant babies” are referenced by Kevin in his “Into the Light”. Openly gay, Keith was outspoken on gender and sexuality issues. He died of AIDS-related complications quite young, just 31. 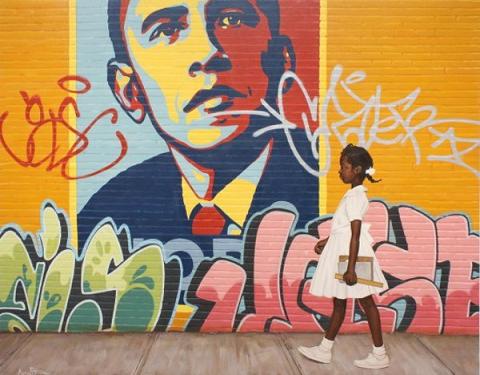 ”Kevin Peterson has a way with color that is so magnetizing and utterly perfect that at your first glance you see a photograph, at second glance you begin to realize it’s truth, by the third you are right in the middle of his brilliantly executed contrasted world of struggle and hope. Peterson has a clear depiction of the struggles of life … but it is his undertone of optimism and vulnerability that has kept our attention.” -Erin Leigh

The little girl in “Hope” is Ruby Bridges, after Norman Rockwell’s integration painting: “The Problem We All Live With”; she is a symbol of overcoming, reminding us that the dreams of movement and acceptance from earlier periods of art history still have hope and are found living in the same media today. While at the time, six-year-old Ruby represented the breakdown of racist segregation, today such a little girl might point to the equally powerful and punitive ageist and sexist rhetoric that maintains the norms and taboos of a contemporary capitalist patriarchy. Norman’s painting was printed in Look in 1964, since he had ended his contract with The Saturday Evening Post the previous year due to their unwillingness to accommodate his political expression.  Kevin says today, instead of trying to help solve social problems, he prefers to portray them in paint. “I’ve always enjoyed painting the figure…” 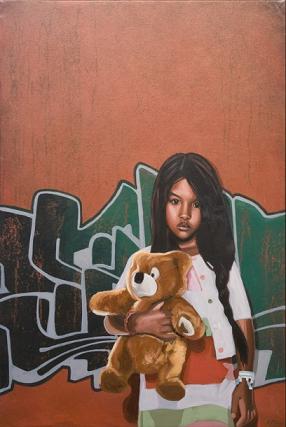 Long ago hardened against the glyph of the adult face and figure, every form of psychological defense thrown up against its affective expressions, the little girl still evokes for us our ultimate humanity, sensitivity and impermanence in an infinitely tender Universe. 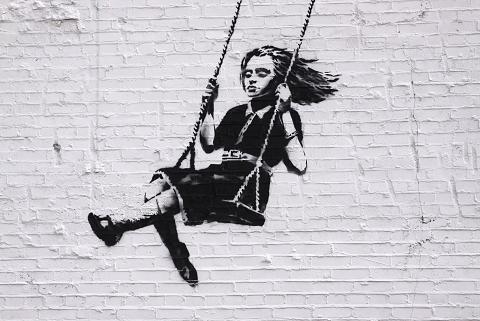 Egoistic consciousness, meshed with the machinations of the big world, hates and despises what is sweet and soft and warmhearted. Kindness and caring melt the ego and its defenses. That’s why a harmless little girl is the most threatening icon to the System: she is trans-political and dissolves the vast, hard defenses of the statist war-machine and its cogs. Unlike ordinary signs, little girls are not absurd and dead arbitrary signifiers; they disarm everyone universally and immediately, being natural symbols of gentleness and goodhearted irreverence. 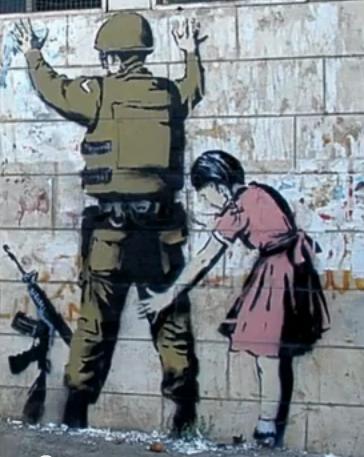 “As far as I can tell the only thing worth looking at in most museums of art is all the schoolgirls on day trips with the art departments.” -Banksy

And Solveig Barlow is definitely one schoolgirl worth taking a looking at…. 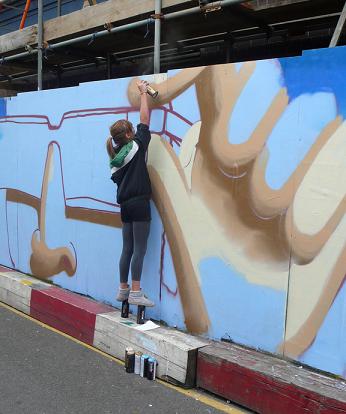 In and through Solveig Barlow there is a radical going-over of the traditional subject/object dichotomy in Western art history. The little girl who had appeared as an image in the outsider art of graffiti writers, standing for the total subversion of all egoistic and worldly defenses, comes to life off the concrete walls and corrugated metal and writes for herself those anti-establishment images and graffiti. 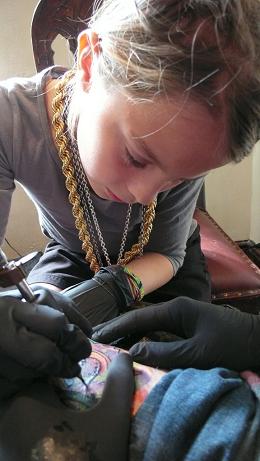 For more images from these artists you can read Ami’s unedited article here and here.