I don’t usually pay much heed to commercial artwork, especially that commissioned by megacorporations like Google, but in this case it was unavoidable. Many who use Google may have noticed that they have been displaying artistic renditions of their logo. On May 23rd, one of these really caught my eye. It was a series of drawings of a little girl running toward something and suddenly encountering a soldier, then in the last frame, they embrace. 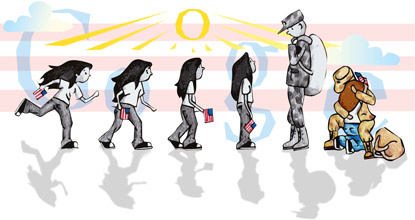 My first impression was that this was a charming metaphor about growing up. It looked to me like a little girl symbolically progressing through life until she discovers romantic love–represented by a soldier indicating youthful manhood–and embraces this new development in her life. This kind of motif seemed too sophisticated for a mainstream company like Google, so I investigated.

It turns out that these artistic flights of fancy have been the results of contests and the winners got their work posted on the Google homepage. The artist in this case was Sabrina Brady, a high school student from Sparta, Wisconsin. Her work stood out among 130,000 submissions as part of the 2013 U.S. Doodle 4 Google National Contest. This year’s theme was “My Best Day Ever…” 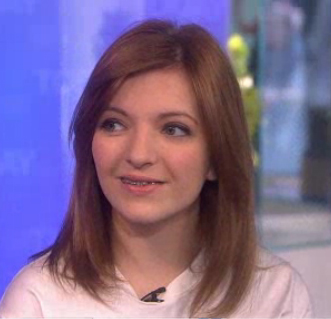 In fact, Brady’s doodle tells the story of her reunion with her father upon his return from an 18-month deployment in Iraq. The way she drew the images still puzzled me though because she was a 12th grader but drew herself like a little girl with her father towering over her. A Today Show interview cleared up the matter as she explained how she intended to convey the excitement she felt as though she were a little girl again.

After an awards ceremony, all fifty of the State Winners exhibited their artwork at the American Museum of Natural History in New York where their doodles were on public display from May 22 to July 14.

In addition to her artwork appearing on Google, Brady receives a $30,000 college scholarship, a Chromebook computer and her school gets a $50,000 technology grant. She will soon attend Minneapolis College of Art and Design in the fall, so this is a auspicious beginning to her artistic career.