Although producing Pigtails can be hard work and a hassle, one of the things that keeps us going is the support of our fans. This post was researched and written by one of our readers named RJ who is a photographer himself and has commented on our site many times. Given that Pip and I cannot be expert on everything, it is a pleasure to have the input of guest writers to round out our content. Thank you, RJ. – Ron

When it comes to creativity, my impetus for output often borders on the nearly unexplainable (think Faulkner’s attempt at stream-of-consciousness prose in The Sound and the Fury). Often two or more disparate thoughts, experiences, ideas, etc. come together haphazardly and a sort-of “Frankenstein’s monster” is wrought (hopefully fairing better than Victor’s poor creature). Thus, it is with a pop song, two photographers and a handful of images I stand before you at the precipice and ask humbly for a liberal and lenient audience.

Recently, I have been on a Neil Young kick, with my headphones at work streaming Crazy Horse and CSN&Y, as well as a peppering of solo work interspersed. One of my favorite off-the-radar Young tunes is “Country Girl” or formally, “Country Girl (Whiskey Boot Hill/Down Down Down/Country Girl I Think You’re Pretty)” which appeared on the Crosby, Stills, Nash and Young album, Déjà Vu back in 1970. It is with this very tune I had subconsciously taken lyrical liberty one evening while browsing my love-worn paperback copy of Roger Minick’s underrated photography book, Hills of Home: The Rural Ozarks (1975). What I was conscious of was Young’s brooding chorus playing softly while viewing images of the people and landscapes of rural Arkansas, and then I found my eyes fixated upon images of “regular” folks only slightly posed, if at all. This is just what I needed that evening, a reality check away from all that is over-produced and gussied-up in my world; the bare-bones world is still a very attractive place indeed! Well, one thing led to another—as so often is the case—and I soon was revisiting another photographer’s similar images, this time online, taken in rural eastern Kentucky circa 1964-65. Pure documentary overall, photographer William Gedney’s images still strikes a chord within me since I first discovered them some ten years ago. Gedney seemed to have a knack for photographing the grace, dignity and strength of people living on the edges of society, and perhaps nowhere is this more apparent than in his Kentucky images, a fitting final addition to my picturesque melodic meanderings.

Artist/photographer Roger Minick was born in 1944 and has been photographing seriously for nearly fifty years. He is a teacher, painter, documentary photographer, fine art photographer, book designer and more; Minick has done it all and is still active. A multiple NEA awardee and a Guggenheim fellow to boot (the latter of which was used to assist with work published in Hills of Home), Minick thrives in setting his images to the printed page, especially the well-crafted fine-art book format. Basically a tome describing the rural Ozarks (where Minick lived as a child), Hills of Home is part photographic record fortified with writings penned via his father, Bob Minick, along with folksy accompanying illustrations by Leonard Sussman. As a whole, the book works wonderfully in creating a voluminous setting of realness in which the reader can deeply explore quietly and at leisure. Of particular interest here are Minick’s images of one family, the Stilleys, to whom the book is dedicated. A rural farm family, the Stilleys exemplify hard work while living in somewhat impoverished conditions and yet can be seen contently smiling in several images (unsolicited smiling in this author’s opinion). The two Stilley daughters, Martha and Janie (from left to right), are shown in their natural setting of work and farm animals, still beaming with youth’s freshness, especially in contrast to other images within the book’s folds of their proud parents, worn with work’s wages. A third image is included herein which beautifully highlights garb long-dismissed on what appears to be a blustery day. The three foreground figures are seen mostly in profile against a somewhat somber-looking crowd, only further accentuating the bright and curious demeanor of these young rural ladies. 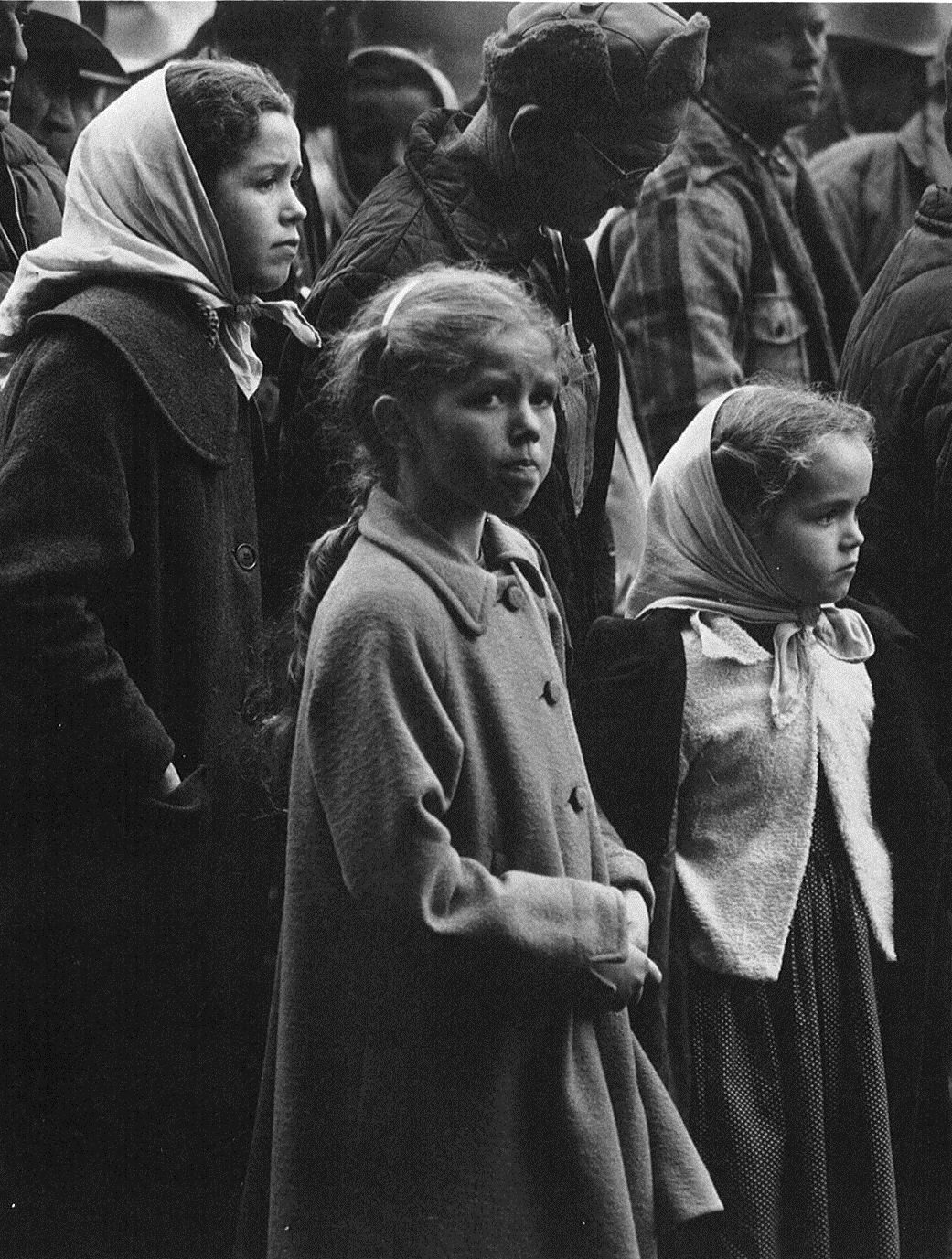 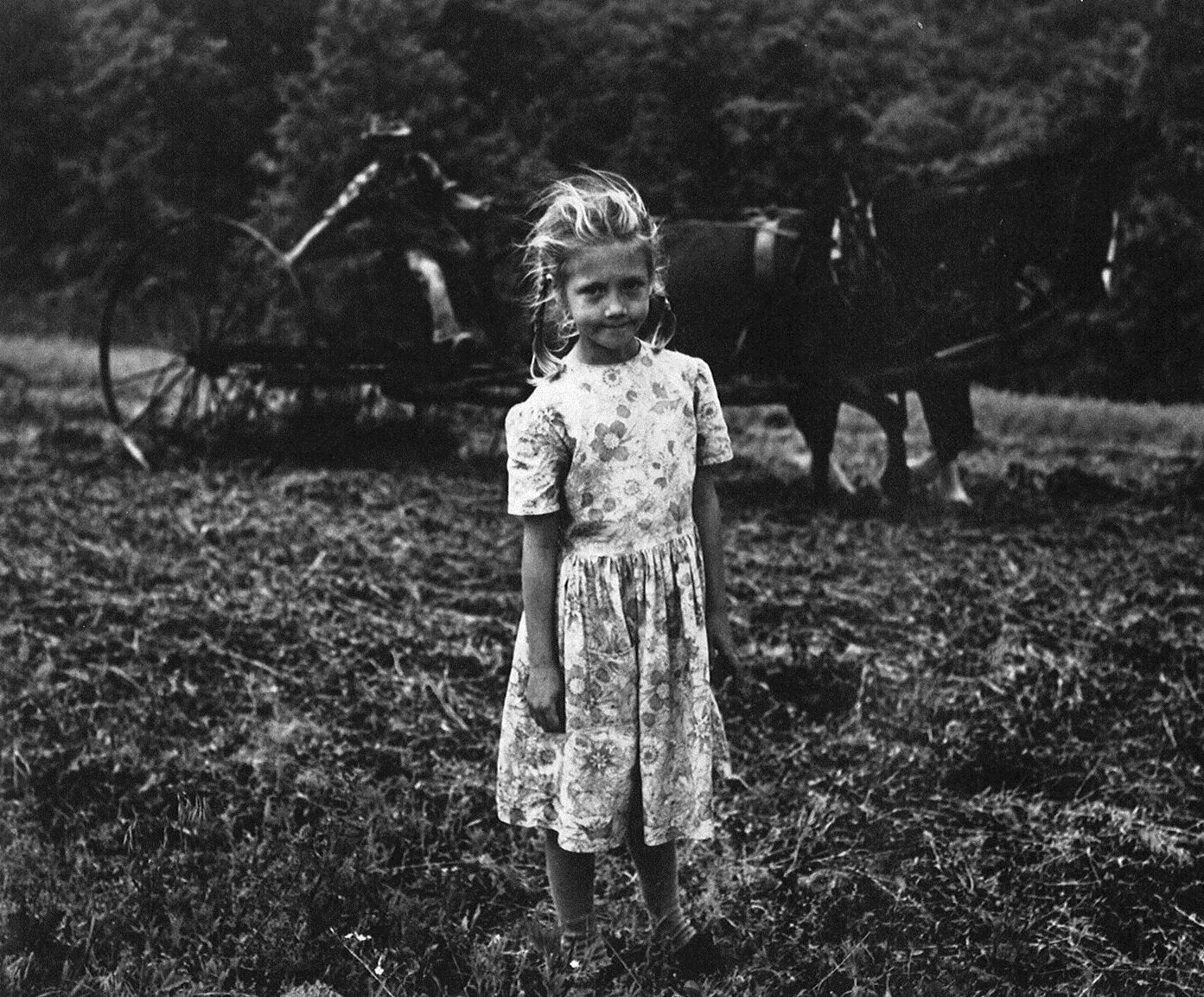 Photographer William Gedney, born in 1932, was unknown to a wide audience until after his untimely death of AIDS at the age of 56. While his subject matter included photographs of rural New York, Manhattan, hippies in San Francisco, photographs taken during travels in India, England, France and Ireland among others, it was during his 1964 and 1972 trips to eastern Kentucky depicting the simple, hardscrabble existence of two families that Gedney made some of his most memorable images. It was there that Gedney met Willie Cornett (who was recently laid off from the mines) and stayed with him, his wife Vivian and their twelve children. Twenty-two of the photographs from Gedney’s visit to Kentucky were included in his one-man exhibition at the Museum of Modern Art in New York (not all featured the Cornetts). William Gedney was a National Endowment for the Arts Grant recipient, a Guggenheim Fellow and received a Fulbright Fellowship to go to India. Duke University’s Rare Book, Manuscript, and Special Collections Library houses Gedney’s photographic archive as well as many writings, correspondence, sketch books, etc.

Three girls in kitchen is arguably William Gedney’s best-known image. There is a fantastic story describing how Gedney sold this image years after it was taken and split the proceeds with the Cornetts (sending $35 to Vivian Cornett) as he promised on any sale of images from their time together. Also, upon closer inspection, there is a fourth figure deep within the image (see if you can find him or her). The interplay of light, fabric, texture and patterns, the echoes of the skirts, the similar standing position of the three sisters and the bare feet; all work harmoniously and provide the viewer with so much more than just a well-documented moment of their surroundings and leisurely work. Fortunately, I live within fifty miles of the Duke University campus, and therefore visiting the William Gedney archive is high on this author’s bucket list. There is simply no replacement for seeing an artist’s oeuvre in the flesh. In the interim, I highly recommend the superb hardcover book: What Was True, the Photographs and Notebooks of William Gedney (1999). 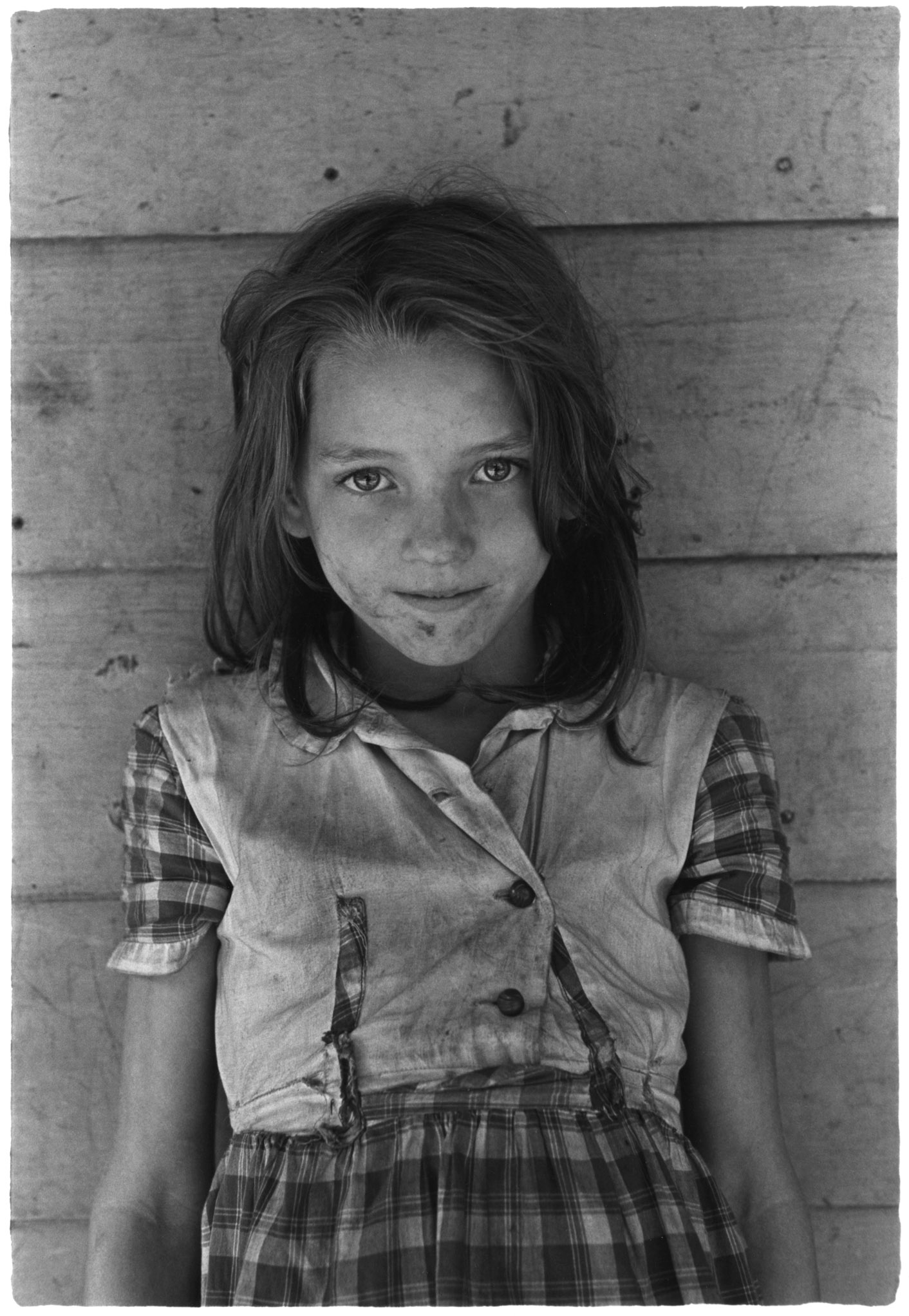 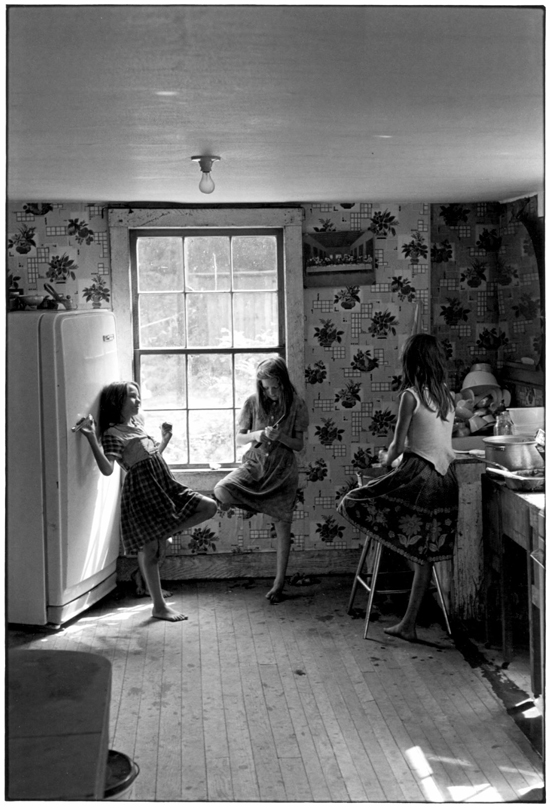 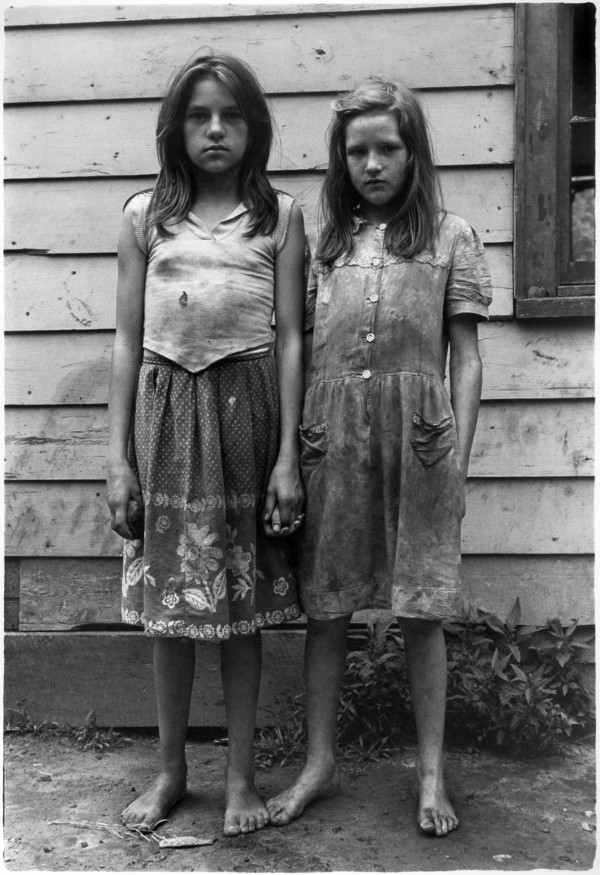 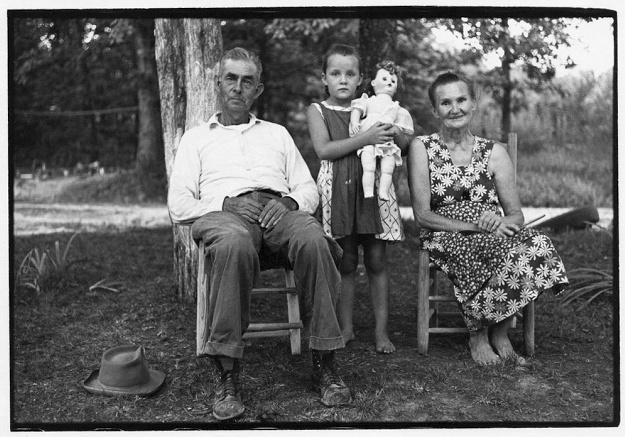 William Gedney – Older couple sitting in chairs
with a young girl standing in between them holding a doll (c. 1965) 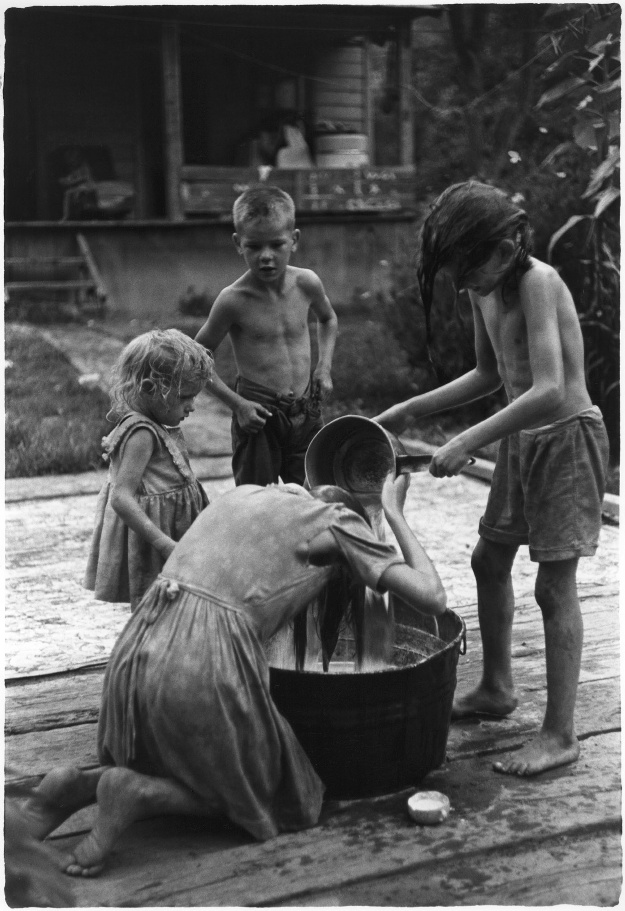