As Pigtails’ purpose is to cover the portrayal of little girls, I figured the whole phenomenon of the “American Girl” would get covered at some point. Fortunately, an artist friend of mine brought my attention to an artist who did an entire series with girls who own these dolls, and her stunning photography gives greater depth and complexity to the issue than I could have offered otherwise.

Ilona Szwarc was born in Warsaw, Poland in 1984 and took an early interest in film and photography. The first camera she ever played with was a family-owned Russian model, and when traveling to America as a child, she got a Polaroid and began taking pictures of everything, especially her brothers, documenting their play together. Her first real camera came from one of her brothers when she was 14. By that time this was already a serious pursuit.  She constantly taking pictures and going to photography workshops and classes; she even had darkroom at her house. Among her inspirations are the films of Krzysztof Kieslowski, Michelangelo Antonioni, John Cassavetes, Ingmar Bergman and the photography of Walker Evans, Diane Arbus, William Eggleston, and especially Joel Meyerowitz, with whom she works and who mentors the progress of her latest efforts.

In 2008 she moved permanently to New York City. Although she was familiar with life in America, having traveled to New York and the United States many times as a child—even living in Texas for one year—actually making the move and setting up shop there was inspirational. Prior to attending the School of Visual Arts in New York, she worked in the film industry; she worked with such directors as Jonathan Glazer, Roman Polanski and Andrzej Wajda. Regardless of the type of work she does, she tries to bring out how women in different cultures cope with gender roles.

While honing her skills as an assistant to Mary Ellen Mark, she embarked on her first project in the summer of 2010 called “Anna” about her mother-in-law who lives in Queens, NY. Also coming from Poland, Szwarc became fascinated by her experience of America, and the interaction offered her an opportunity to establish a personal bond.

When she first came to New York City she wanted to become a street photographer, so she began going out every day and photographing on the streets, following in the footsteps of masters like Meyerowitz and Garry Winogrand, While taking pictures on 5th Avenue, Szwarc started noticing girls carrying dolls that looked like them and wore matching outfits. She had never seen anything like that and became curious about this cultural phenomenon. She quickly realized that those dolls are very different from Barbies but, like them, had a whole culture built up around them. 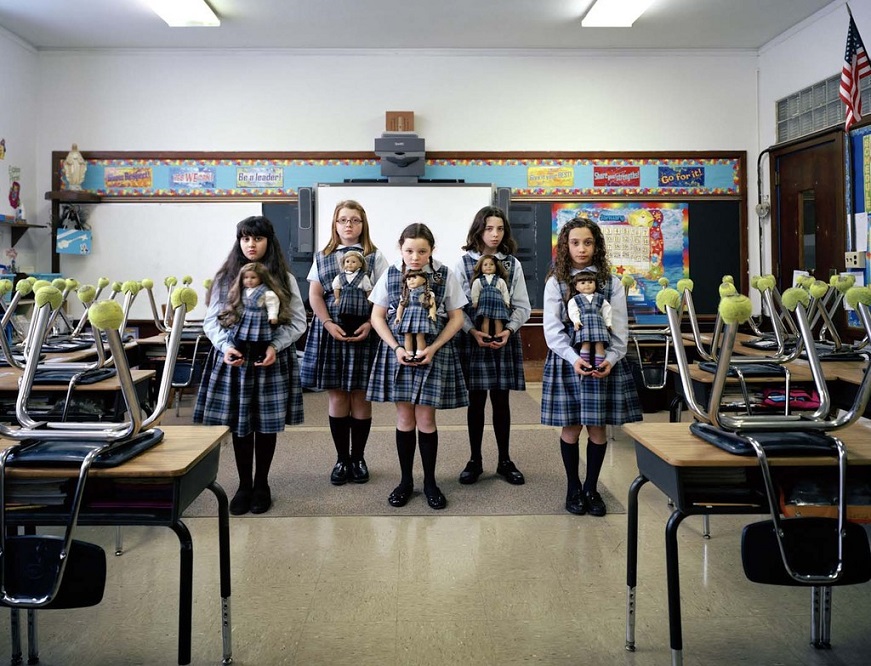 Inspired in part by photographers who incorporated dolls in their work—like Laurie Simmons and Hans Bellmer—Szwarc traveled across the United States for two years to capture young girls and their American Girl dolls. While this brand includes a line based on historical characters, she was more interested in the look-alike aspect of these dolls. In her series entitled “American Girls”, she explores gender and beauty in America by having girls pose in intimate photos with their personal avatars. 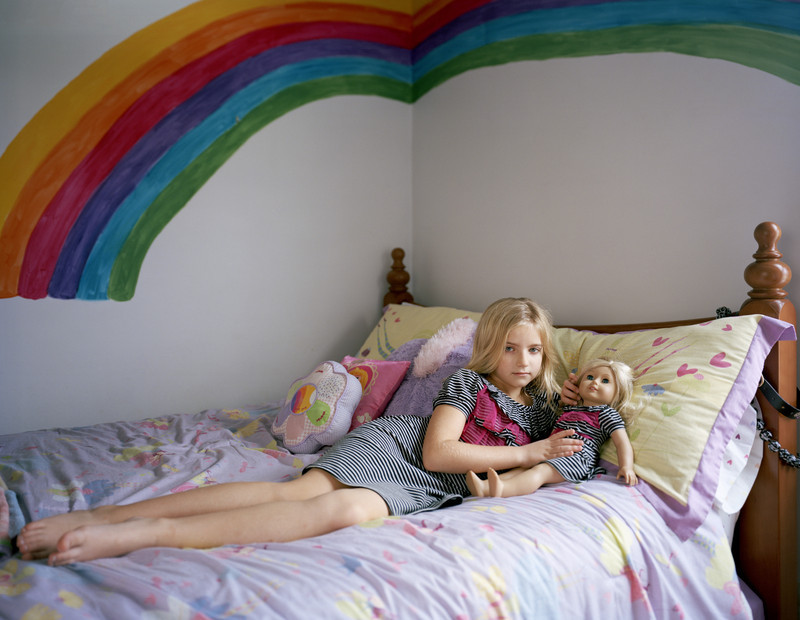 Her subjects were girls that were passionate about their dolls and wanted to be photographed for her project. She knew she’d need to find patient subjects, so she sought out aspiring models and actresses, or at least girls whose parents saw them that way. She let them choose the outfits—for themselves and for their doll(s)—and Szwarc wanted to create meaningful portraits of the girls, so she chose to portray them without the typical smile. She believes it makes them more natural and serious, which changes the dynamic: “I think they reveal more when they are not smiling. My intention was to create works of art, and not family snapshots of girls with their dolls.”

Szwarc was initially struck by the name of the product itself, feeling that it was very exclusive, with the company imposing its stereotypes about what a contemporary American girl is. The dolls were originally conceived of as anti-Barbie toys—modeled on the body of a nine-year-old—and although the basic premise is that the girls can create a “mini-me” version of themselves, they are in fact offered limited choices. Apart from the clothes and accessories, the only options are: different skin colors (light, medium and dark), different eye colors (about forty) and many hairstyles (more than eighty). Yet the basic face mold and figure of all dolls are the same—a slim, petite and androgynous shape.

This girl incorporated her alter ego as part of her Halloween costume: 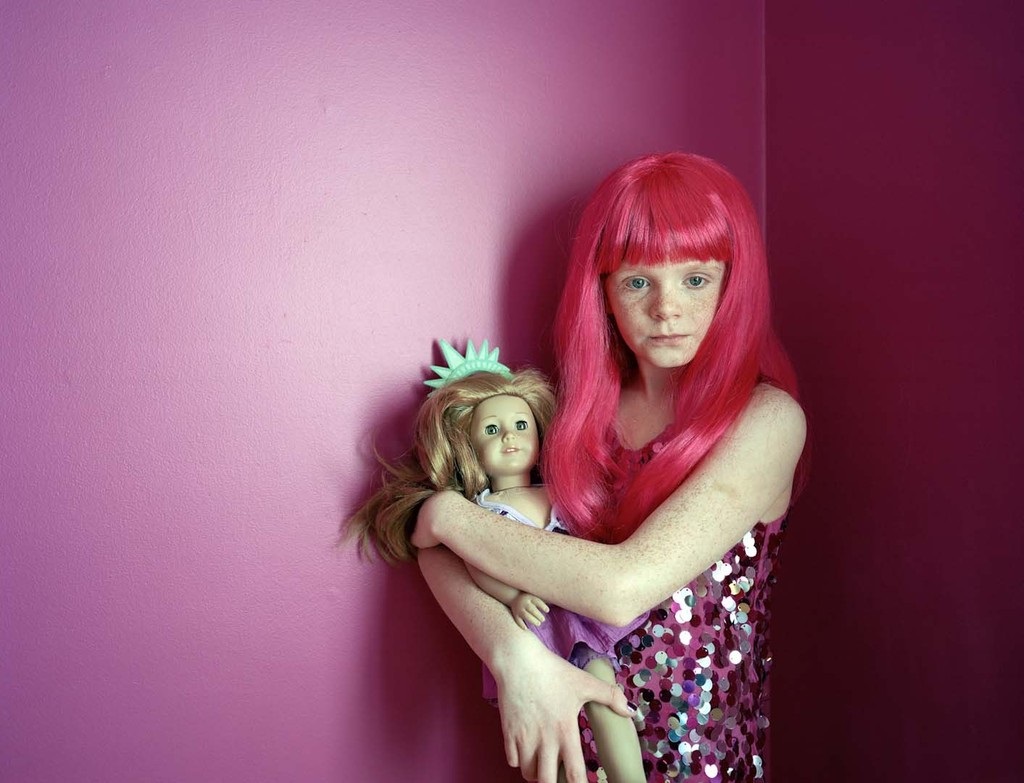 So Szwarc began to contemplate how individuality is manifested in this world and how it is communicated to children. As all the dolls essentially look the same, the only expressions of individuality rely on the hair style and fashionable clothing and accessories. With a wide variety of miniature accessories–a doll hospital, and a doll hair salon with personal stylists–they are perhaps the most luxurious toys ever invented. Each costing around $100, the toys are a designer product targeting the tween set, and Szwarc believes the girls connect the dolls to social status. “They are meant to carry a message of empowerment to girls, however, what I have noticed is that actually they only perpetuate traditional gender roles and keep the focus of girls on body grooming and dressing up as a way of identity maintenance.” The branding behind the doll perpetuates domestic associations, and Szwarc is interested in how culture and society condition gender identity and how it invents childhood. One of her subjects had 24 dolls—all gifts from her grandmother. 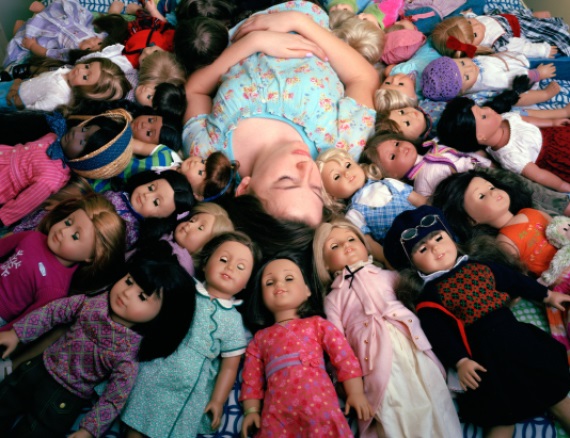 I find this image interesting, as many people still falsely attribute class with race. 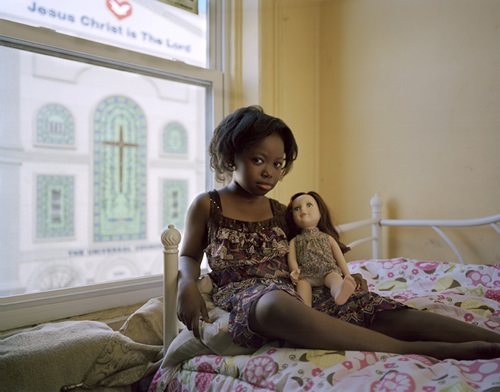 With a plethora of accessories, at least the company can create the appearance of being politically correct. 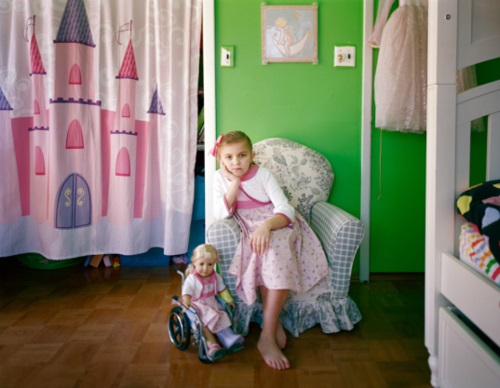 One of Szwarc’s subjects had a brother who was dismayed to find that they did not have a doll for him—a boy—and another was upset that she couldn’t buy the kind of clothes she wanted at American Girl Place. She explained that she doesn’t really like dresses and regards herself as a tomboy. Nothing there seemed to reflect her own style and personality, and in order to get matching clothes for her dolls, she had to go to different toy stores—like Build-a-Bear Workshop—where the outfits were more gender-neutral. Even before learning this interesting back story, I felt this image had a more artful quality than most. 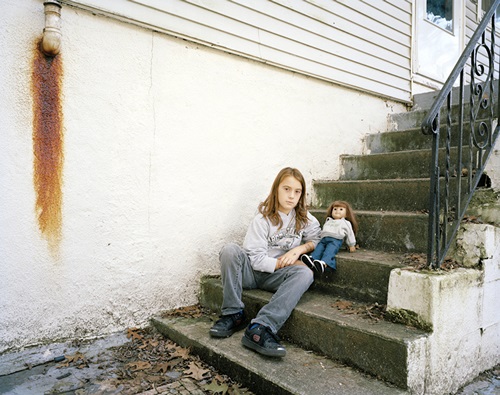 Despite Szwarc’s misgivings, the philosophy behind these dolls does represent a cultural shift away from toys that consistently focus on body image. These dolls do look like children, with a slightly fuller body type, and are fully clothed. It should be understood, however, that concern over body image is not entirely cultural and some girls—especially those considering modeling or acting—will find ways to display themselves to best effect, as demonstrated by a number of Szwarc’s subjects who chose bathing suits. 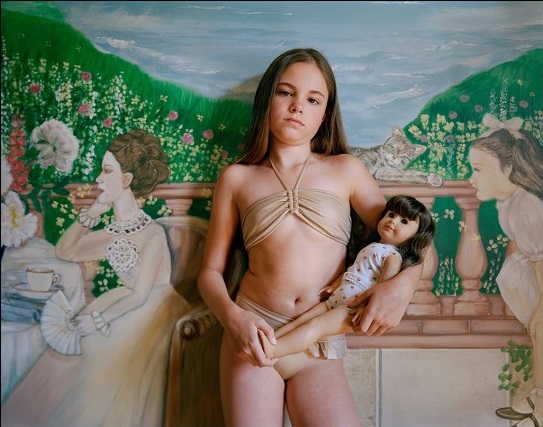 The American Girl phenomenon must seem peculiar to Szwarc and probably most Europeans, as Americans manage to have an extended attachment to their dolls, even into their teens. Neither these nor Barbies are really dolls in the traditional sense; the idea must have been for the youngest girl in a household to have a doll as a surrogate for exercising nurturance, and perhaps some companionship, until she was old enough to take on greater responsibilities in the home. They were never meant to serve as a sop for a girl’s self-image as American dolls have become, and they may demonstrate a subconscious desire by both parents and children in the U.S. to extend a privileged and innocent childhood. 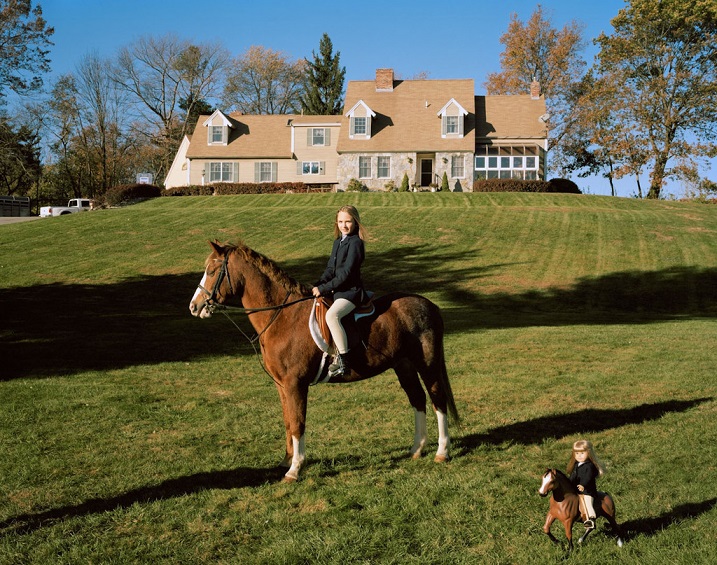 These pictures are presented unaltered from the world we live in, yet they confront the viewer with the sometimes hyperrealistic quality of American existence that could only be realized by an artist with an outside perspective. In 2012, Szwarc returned to visit her old home town of Canadian in the Texas panhandle. She noticed something new about the rodeo culture she remembered from high school: “I knew about the rodeo culture from back when I lived there, but I wasn’t aware that young girls were doing it.” After getting to know so many girls while working on American Girls, it was fascinating for Szwarc to discover a group of girls in the same age range who had a totally different idea about their femininity and gender roles. They work hard and are physically strong and dominant, and this encounter has become the inspiration for her latest series Rodeo Girls. 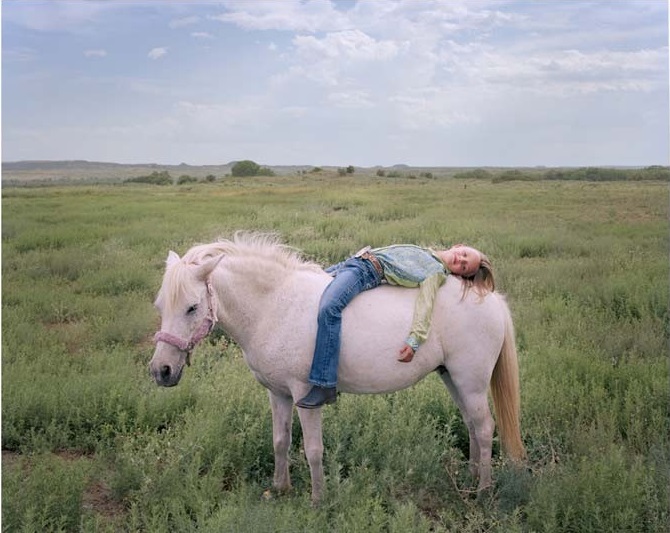 Szwarc is interested in photographing girls because she sees herself in them: “As a woman of course I relate to other women. Through photographing them I isolate and explore different aspects of my experience of being a woman. It is a way of self-portraiture, but enriched by the experience of others.” Although it was the girls who drew her into this new milieu, the new work includes depictions of both men and women.