The final episode, Harry Potter and the Deathly Hallows—made into two films—is when Luna comes into her own. As a late arrival, there is the necessity of introducing the character and developing her so that readers and viewers care about what happens to her. There have also been enough clues strewn about regarding the nature of magic in this world and the Lovegoods’ place in the scheme of things that suggests their contribution to the future of wizardry.

We got our first hint of Luna’s family life when she had her first long talk with Harry about how her mother was killed during an experiment. To the average viewer this might come off as comical and emphasizes the quirkiness of the family, but it got me thinking that someone would only take these kinds of risks if she were doing something very important. The last episode does make clear that there was a loving family life demonstrated by Xenophilius’ public affection for his daughter. It also gives the audience the emotional context to understand his distress at Luna’s abduction. 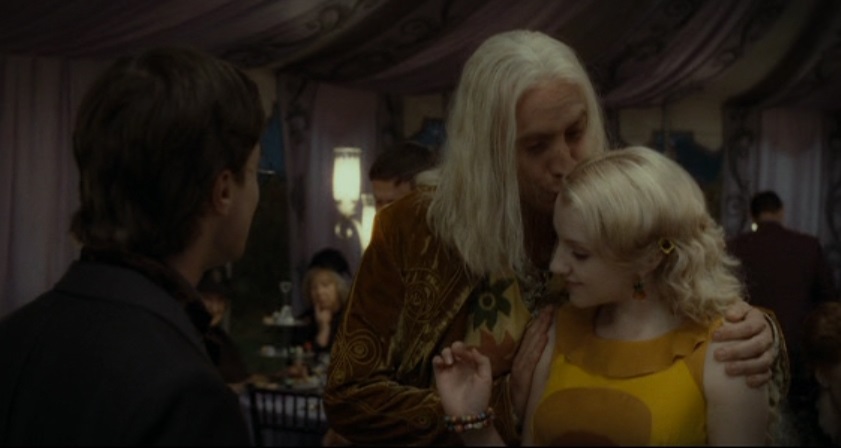 When Harry and the gang do see Luna again, it is in the dungeons of the Malfoy Estate. Still true to form, Luna is polite to Dobby and shows him the kind of respect rarely afforded an elf by establishment wizards and witches. An interesting clue is that elfin magic does not work in the same way as “classical” magic. It is as though they function on different frequencies and are not constrained by one another. Some efficient exposition ties up a few loose ends by reintroducing us to Ollivander who later reveals more about the nature of magic in this world. We learn about the composition of wands and how they reflect the character of the owner. I am particularly intrigued by the ambiguity of Draco’s role in the story as his wand’s core is a unicorn hair while the rest of his family’s is dragon’s heartstring and lamenting that his mother’s wand just doesn’t understand him. 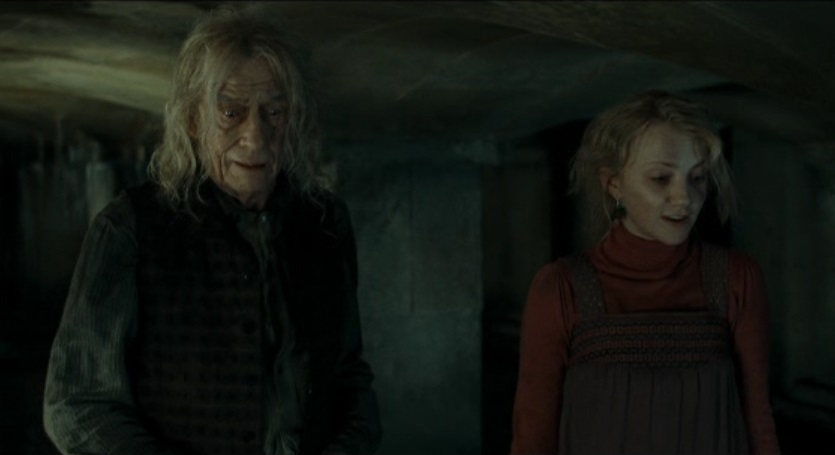 I wondered if the death of Dobby was a cheap way of reminding us of our main characters’ peril and illustrating the malice of Bellatrix. But given the way Dobby could easily penetrate magical defenses, he had to be disposed of so that Harry and company would need to cope with Gringotts and Bellatrix’ vault by some other device than elfin magic. Luna’s compassion is demonstrated once again as she helps Harry give Dobby a dignified passing. 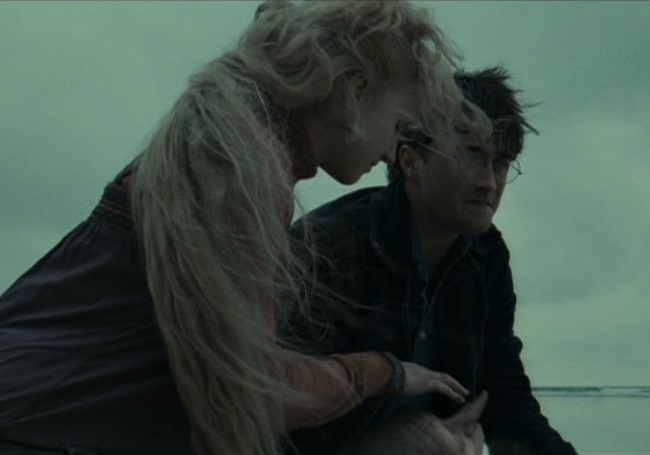 In the beginning of Part 2 there is a somewhat mundane scene that for some reason really sticks in my memory. While some exposition is shared about the good old days of the Weasley’s family life, Luna seems transfixed by a wind chime. She displays her scholarly upbringing and shows she is knowledgeable about the magic of other cultures including Muggle. This is yet another clue that there is this dimension of non-conventional magic that exists and that her family has made the effort to investigate it. 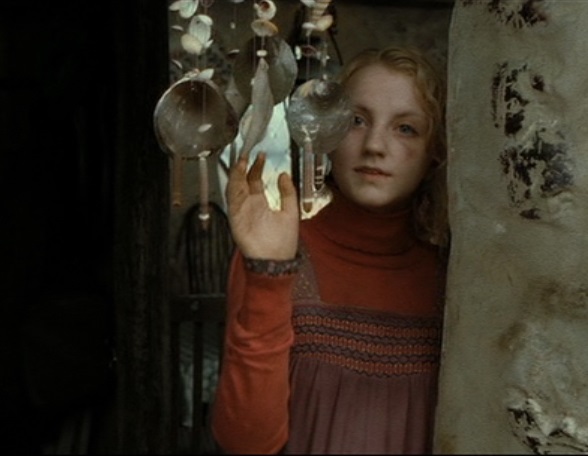 A nod to the human need for iconography and fetishes, the wizarding world has its holy relics as well. Here, Luna is displaying her extensive education by revealing the existence of the Rowena Ravenclaw tiara—likely the artifact Harry is looking for.

Up to this point, Luna has mainly facilitated the storyline—not being especially assertive about her own beliefs and wishes. Having knowledge and experience that others haven’t, she realizes that though she may seem crazy to others, there is a time when others need to listen. While everyone is frantically searching for the tiara, Luna gives Harry a wake up call and makes him stop and hear what she has to say. Consistent with mythic hero’s journeys, she cannot accompany him to meet the ghost of Helena (The Grey Lady), Harry must face this next task on his own. 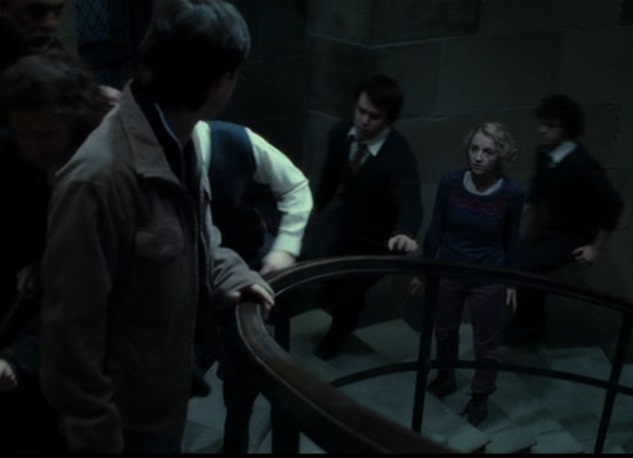 I suppose it made some sense in the author’s mind that the two odd yet heroic characters should end up together, but I can’t help thinking what a treasure of experience Harry will be missing by not being with Luna. Having had his share of excitement, perhaps it is just that he be allowed to settle into a life of normality. Both Luna and Neville have suffered family tragedies and having prevailed in this latest crisis, can establish a basis for mutual healing. 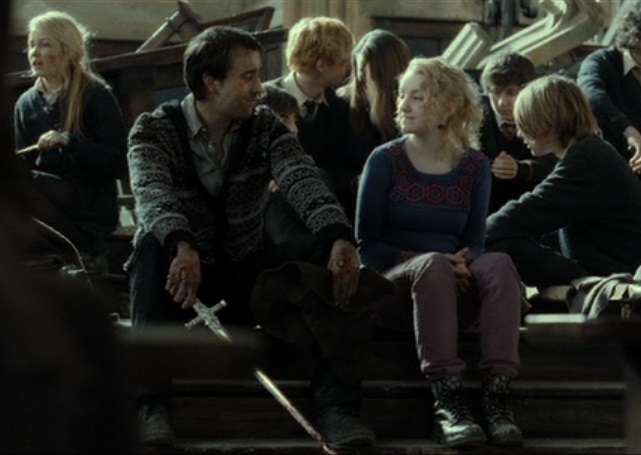 I got the strong feeling watching the last three episodes that the Lovegoods represented more than just a counterculture, but opened the door to an era of humanistic magic. New magic is possible as demonstrated in Half-Blood Prince with the revelation of Severus Snape’s new spell—along with its countercurse. It was revealed that there may be many types of magic such as elfin and trollish which do not operate on the same basis as the classical magic (notice the use of Latin incantations) taught at Hogwarts. Apart from the Unforgivable Curses, there seem to be some very powerful spells or enchantments that can render witches and wizards helpless, for example the Thief’s Downfall—a bit of trollish magic that can wash away classical spells. What I see developing is a system of alternate magic that has a different character and can operate where classical magic fails and the Lovegoods were developing some of the technology that others could build upon.