I hate it when I can’t come up with a more clever or apt title than someone else. The Other F Word, released in 2011 by Oscilloscope, was a film about the ironic evolution of punk rockers and culture. Inspired by Jim Lindberg’s book Punk Rock Dad: No Rules, Just Real Life (2007), Andrea Blaugrund Nevins thought it would be interesting to explore the effects that parenthood had on men noted for their disrespectful behavior, disdain for popular culture and expression of frustration through verbal and physical violence. Cristan Reilly rounded out the crew as producer, keeping the rest of the crew focused on the project.

Apart from being a catalyst, Lindberg’s observations and experiences provide a unifying thread throughout the movie. Artists from around the country were featured, but this documentary focused on the L.A. scene and though each group filled similar niches in metropolitan areas throughout the world, L.A. punk stood out because of its exceptional violence. The most influential groups got their start in Hermosa Beach: Black Flag, Circle Jerks and Descendents, who inspired the groups to come. Flyers sporting their irreverent art were plastered throughout the city and have now become coveted collector’s items.

Given their image, one might expect punkers to be neglectful parents at best, but they are human beings, fall in love and take their paternity seriously in the face of terrifying responsibility. Balancing their careers as rockers and the labor of love of fatherhood is no small accomplishment, and there is no shortage of amusing anecdotes as these guys adjust to middle-aged family life.

Jim Lindberg was the lead singer of Pennywise and unlike the other featured artists, he had a relatively happy and stable childhood. He believes the thing that pushed him over the edge was that he was born cross-eyed and acted out to distract people from focusing on his condition. Smashing windows may have been de rigueur for punkers, but Lindberg describes the music as sounding like a rock through a window. He is the proud father of three girls–Brighton, Emma and Kate–and he treasures his family life, but the current nature of the music industry dictates that performers be on the road much of the year, exceeding 200 days in the case of Pennywise. Here we see Brighton and Emma watch their daddy pack for the road, which will inevitably lead to missed birthdays and other milestones in the girls’ lives. As a token, he packs a Barbie with the rest of his accoutrement. Brighton has said outright that she doesn’t like it when he leaves. 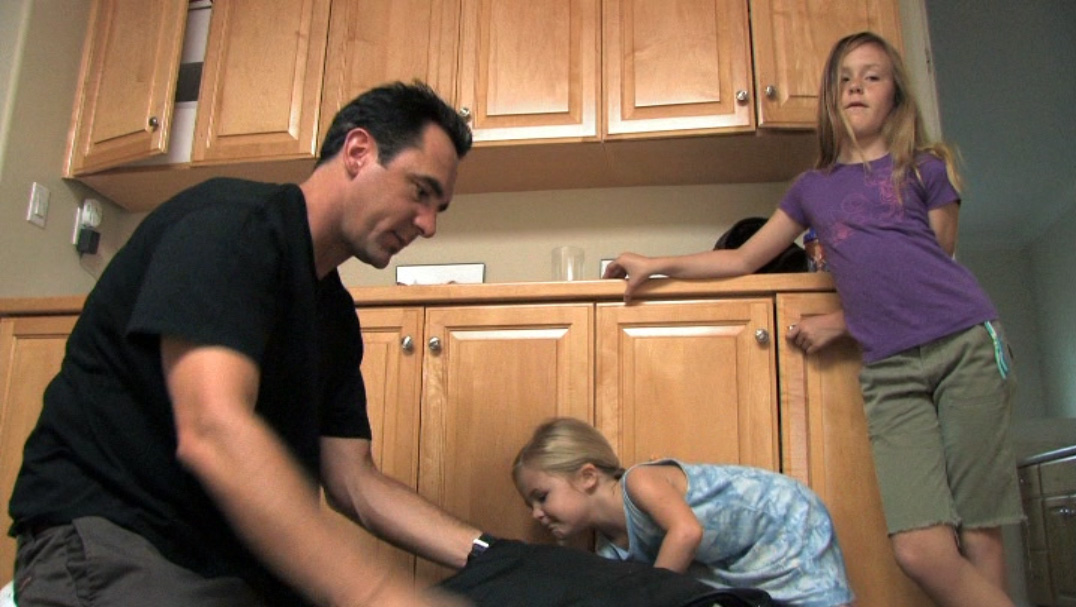 The funny thing about being hip to the rebel scene is that Lindberg knows instantly when his daughters are tuning him out. Many times he has wanted to say, “Don’t give me that look; I invented that look.” Here Emma is giving one such look to the camera. 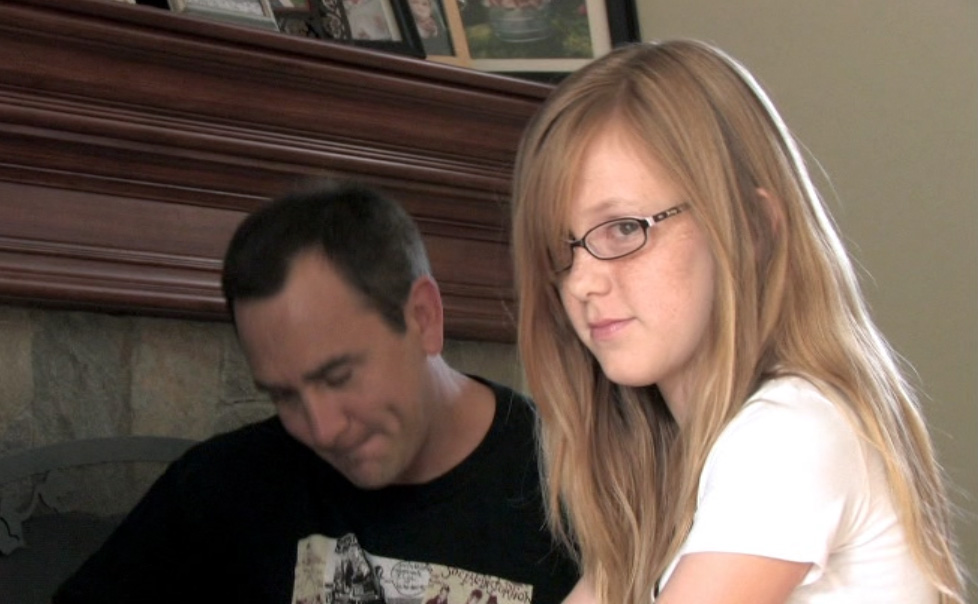 Almost all the artists concede that completely integrating punk culture with family is impossible but there are some charming overlaps. Lindberg had the names of his two oldest daughters tattooed—one on each shoulder—and finally the day came for the youngest to get her name done. There was some argument about which sister would share and what kind of design would be acceptable yet not too girly. Usually, girls will have something mundane to offer at show-and-tell, but Kate will have a story about the day her daddy got her name tattooed. Perhaps it’s a consolation that he keeps their names with him always, since he spends so much time on the road, and though Kate may not know at any given moment where her daddy is, she does learn an awful lot of geography. 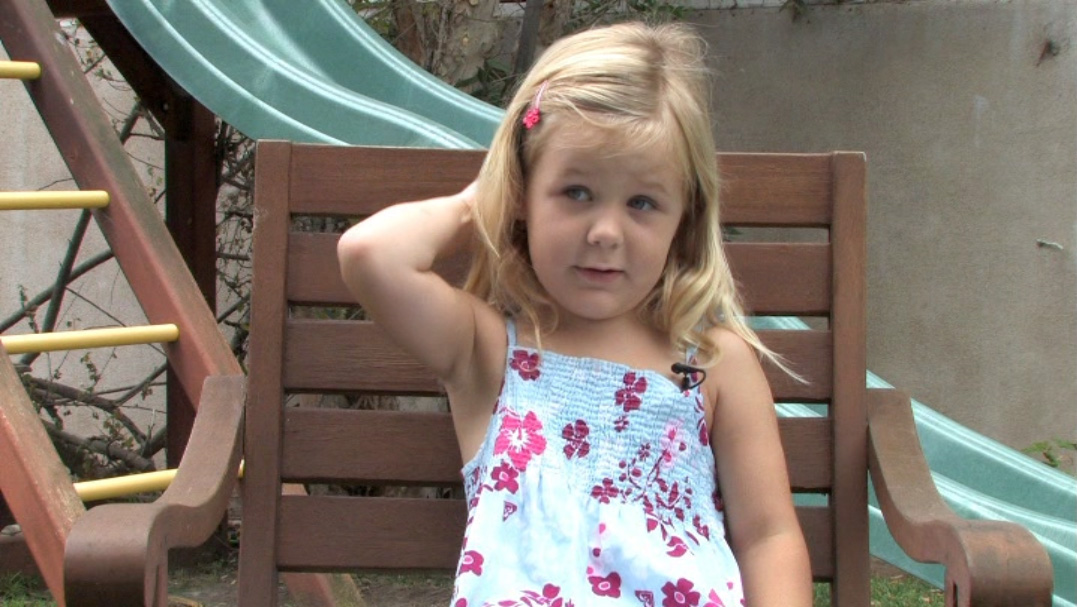 Art Alexakis (Everclear) has two daughters; Anna, the oldest, was in college during filming and the youngest—Arizona—is seen here. It is somewhat incongruous hearing this man driving his little girl in a mini-van singing “Wheels on the Bus.” The dads get razzed by the other rockers for driving such uncool vehicles, but Alexakis says that is preferable to hurting one’s back with the constant ins and outs of traveling with a young child. 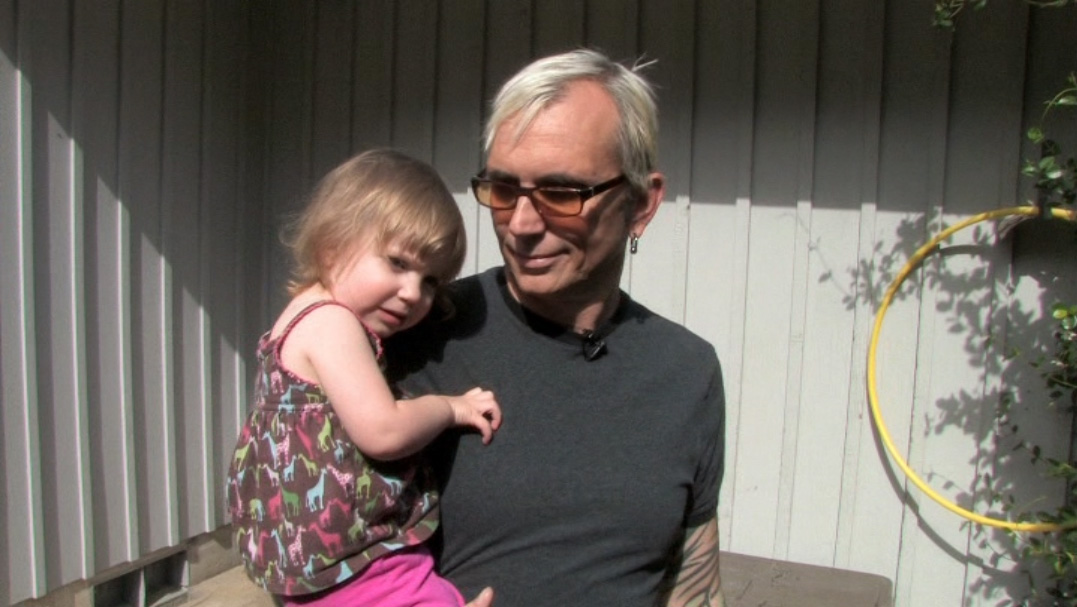 Here Tim McIlrath (Rise Against) tries to distract his daughter Blythe from the computer long enough to practice the lyrics to one of his songs. The family is vegan and in another scene he wonders about the wisdom of microwaving peanut butter. The demanding touring schedule means he has never been home to see her in any of her Halloween costumes. 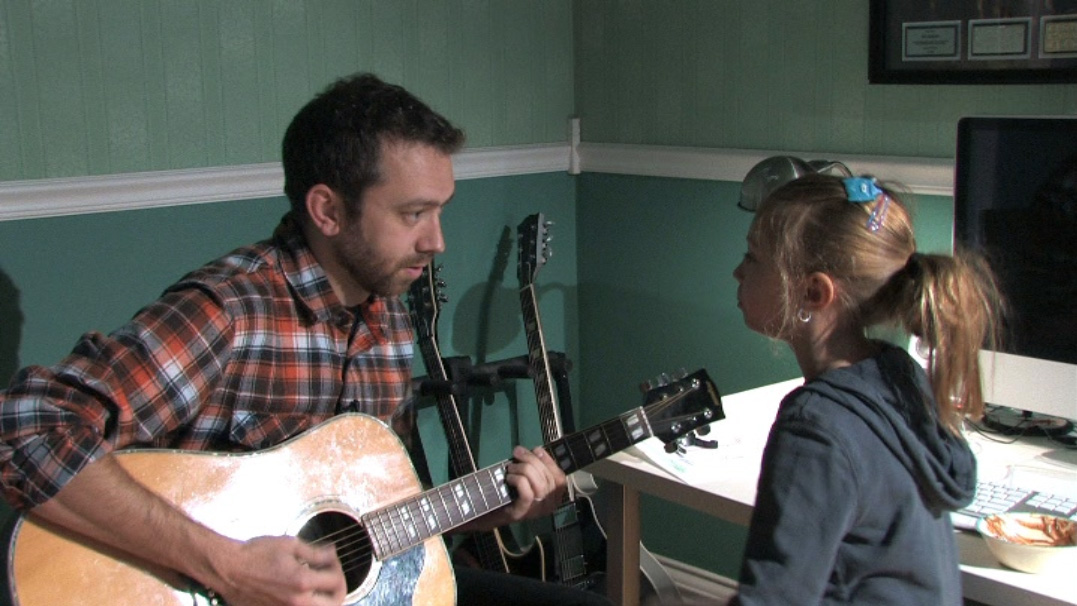 Mark Hoppus (blink-182) has sons and in a way things have been made easier by the low expectations of his friends and family regarding his skill as a parent. He has found himself buying “clean” versions of his songs to play in the car when his family are present. Hoppus philosophizes about how strange it is that we don’t use certain words around people we don’t know. He says if we can get over that hurdle, we can break down the walls between us: “The word ‘fuck’ can bring us together!”

For Jack Grisham (T.S.O.L.), the adjustment to family life was not easy and his band was considered one of the most violent. His daughter Anna recalls a time when he came to school to meet with the principal and, being so oblivious to common sensibility, showed up wearing a “Fuck the Police” t-shirt!

Fat Mike (NOFX) and his wife had decided that their kid would just become a part of their lives and that they weren’t going to change anything; one can only imagine how long that lasted. Here you can see him waking up his daughter Darla sporting his zebra robe and gingerly carrying her to breakfast. Yes, Fat Mike now has a pink room in his house. He says the other parents at his daughter’s private school are nice enough but just really boring. He has no idea what he will tell his 4-year-old about the two dominatrices tattooed on his left arm should she ask. 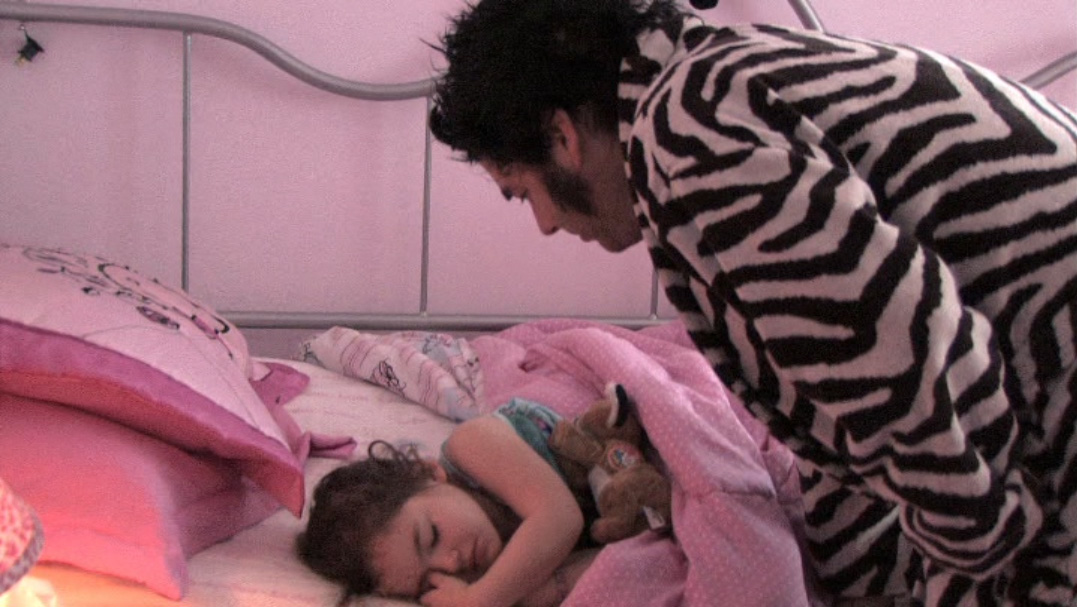 Flea (Red Hot Chili Peppers/Fear) and his daughter Clara play piano duets together. He remembers how parents used to say, “I gave you life; I can take it away.” but he finds that ironic because, in his view, it’s the children who give their parents life. 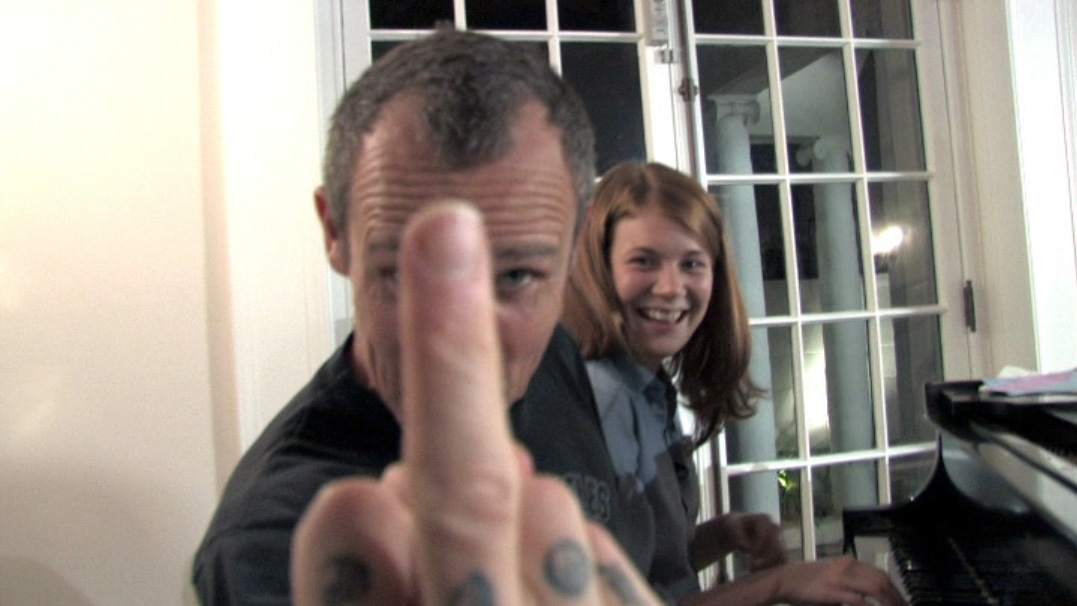 Ron Reyes (Black Flag) is probably one of most respected punkers and was a kind of role model to those who came after. He quit in the middle of a set in 1980 because the violence got to him. He moved with his family to Canada and recently returned to the U.S. just in time for the filming of the documentary. Here he is looking at old albums and reminiscing with one of his daughters as she tells him the dirt she dug up on him on Wikipedia. 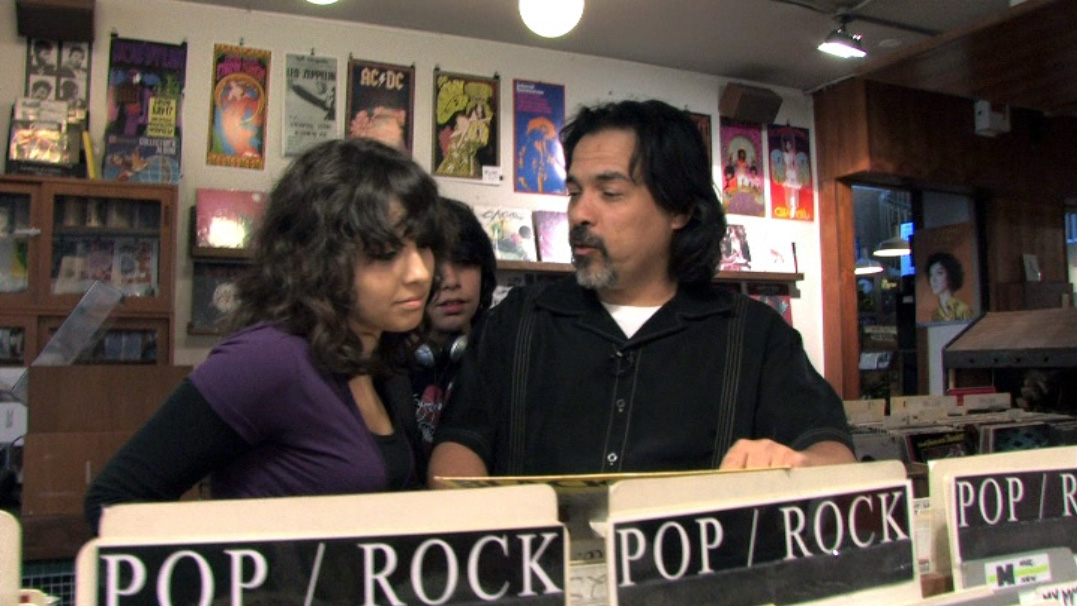 Tony Adolescent (Adolescents) discusses the strain and rigors of touring which becomes more challenging as one gets older. He has a son and a daughter–Dari seen here–and his house is easy to spot; it’s the purple one. 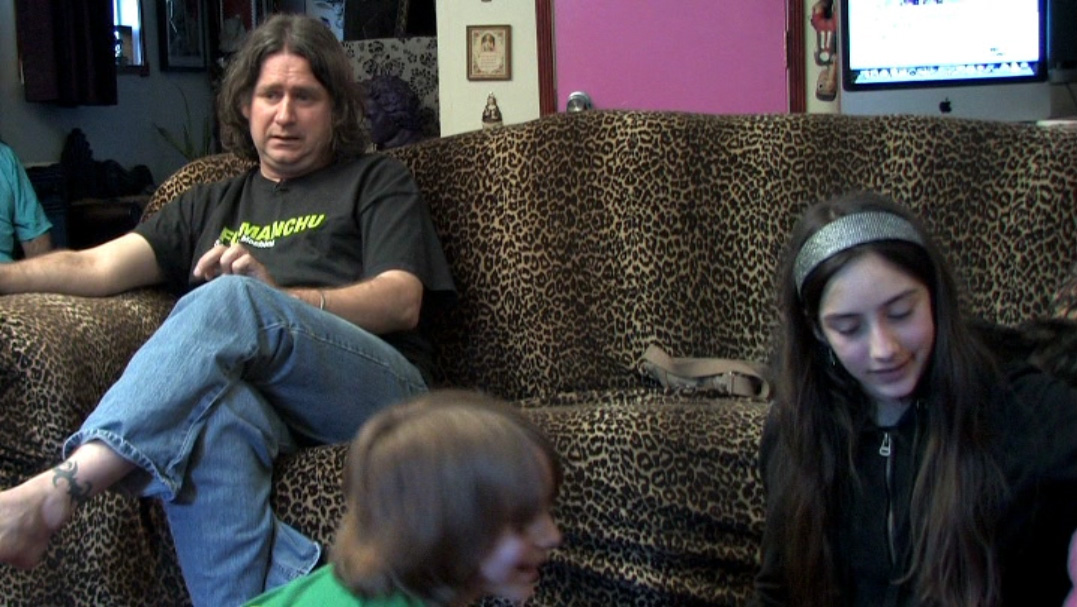 Rick Thorne (pro BMX) doesn’t have the heart to smack or spank his daughter Natalie. Instead, he pinches or threatens to pinch her, which we see in this scene is quite effective. 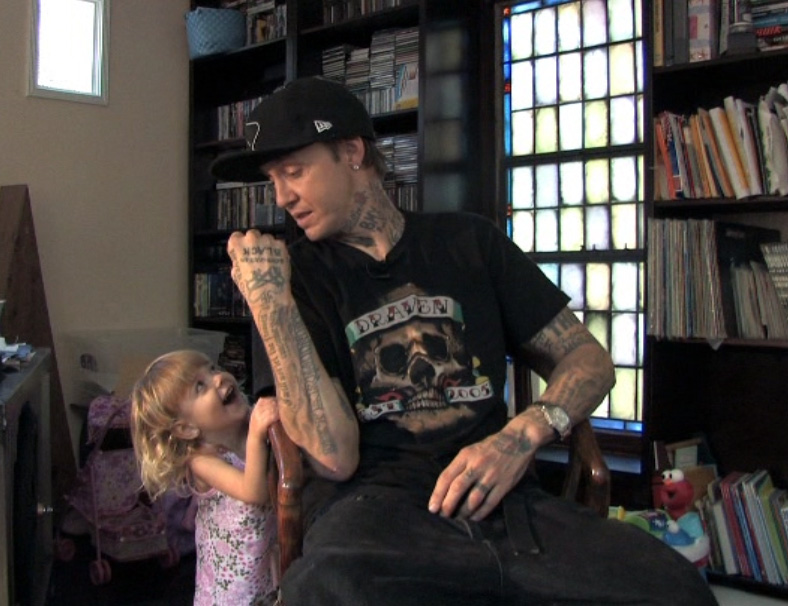 Being a democratic group, there was frequent conflict between the members of Pennywise who didn’t wish to tour as much as the single guys did. Jim Lindberg always got outvoted when he tried to change or shorten the schedule to share some special occasion with his girls. This unbridgeable rift finally came to a head during filming and he decided to quit. He later started another band called The Black Pacific, presumably with more understanding married members. Now he is home more and can be involved in their lives. Here, he and Emma are on their way to a father-daughter dance where for the first time she didn’t have to share her father with her older sister. 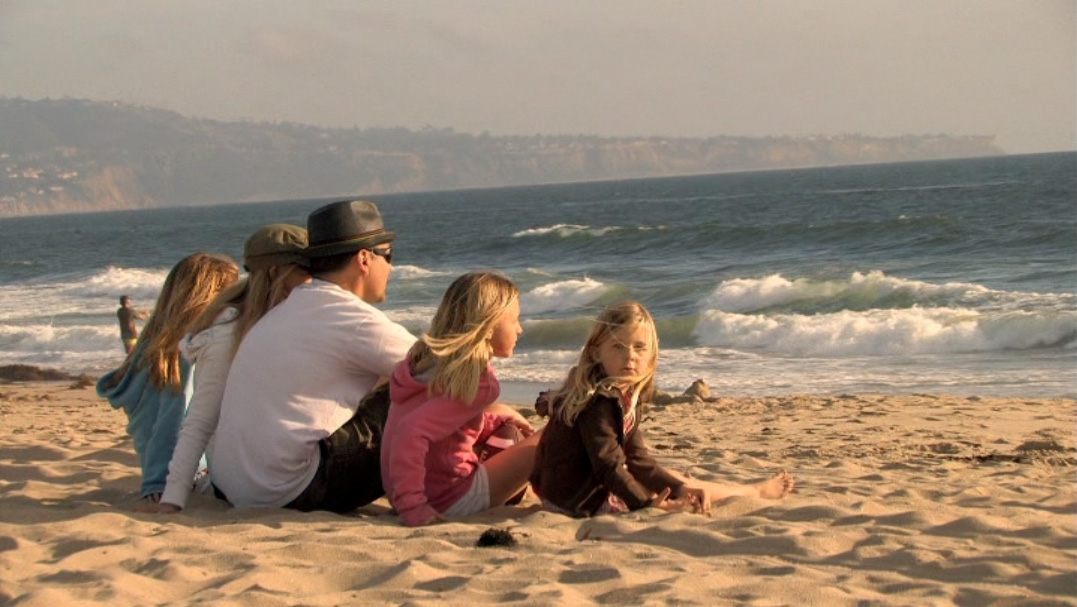 Incidentally, for those who are interested, the word “fuck” or one of its variants occurred 63 times in the film.

The Other F Word (IMDb)

3 thoughts on “The Other “F” Word: Fatherhood”