One would be hard-pressed to find any historian who regards little girls as big players in the course of history, yet when one looks closely, they make their presence known. One of the earliest landmark television series on art and history had some of these interesting anecdotes. It was a thirteen-part series called Civilisation, hosted by Kenneth Clark and aired in 1969. 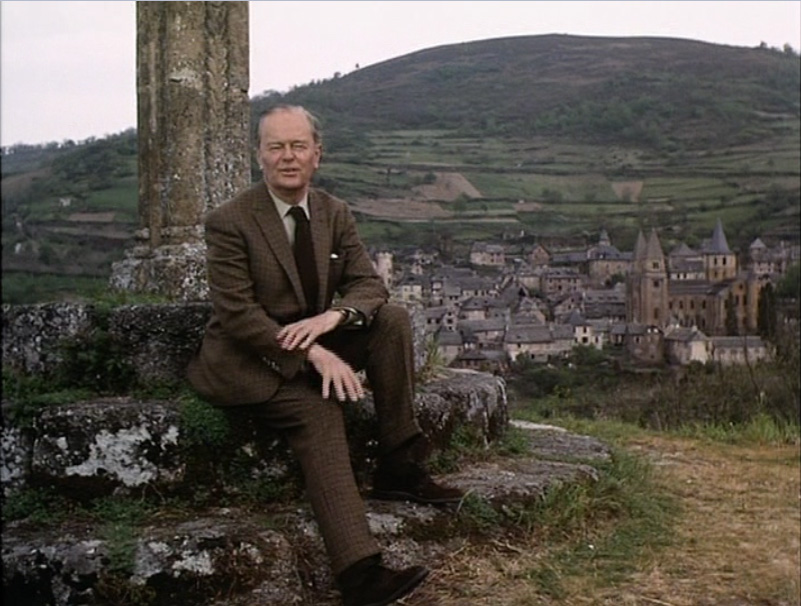 In the second episode, called The Great Thaw, I was startled to find a few minutes dedicated to a story about the cult of a little girl. It seems that during late Roman times there was a girl who refused to worship idols as a Christian and remained obstinate in the face of persistent social pressure and thus was martyred. Her relics began to work miracles and the cult of Sainte Foy (Saint Faith) began. In the 10th Century, the story of one miracle in Conques, France reached the bishop of Chartres, who then sent Bernard of Angers to investigate. It seems a man’s eyes had been smitten by a jealous priest and he was blinded. Later, when the man visited the shrine of Sainte Foy, his vision was restored. Witnesses claimed that the eyes were taken up to heaven by either a dove or a magpie so that they might be restored. The bishop was satisfied with Angers’ report and ordered that a Romanesque church be built at the site, an important stop on several pilgrimage routes. 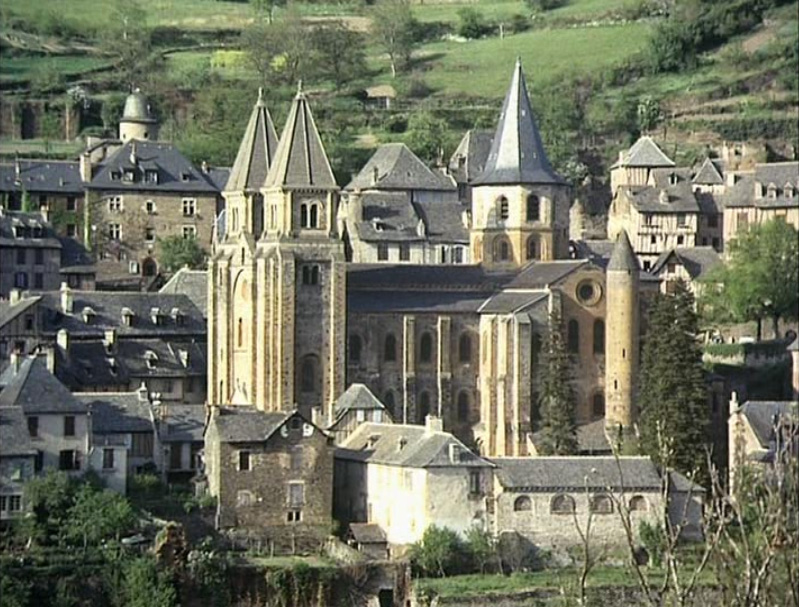 The relic in question was installed in a golden statue studded with gems inside the church. It’s ironic that a little girl who refused to worship idols should be commemorated in this way. 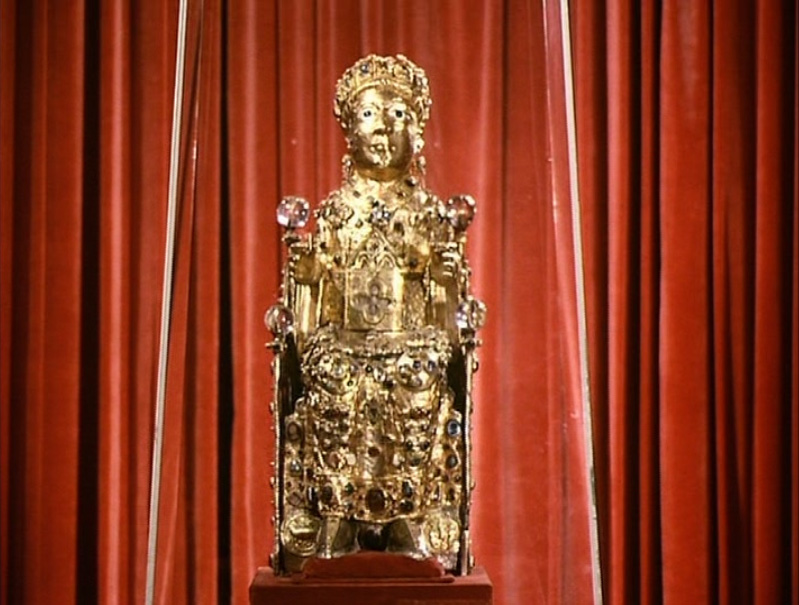 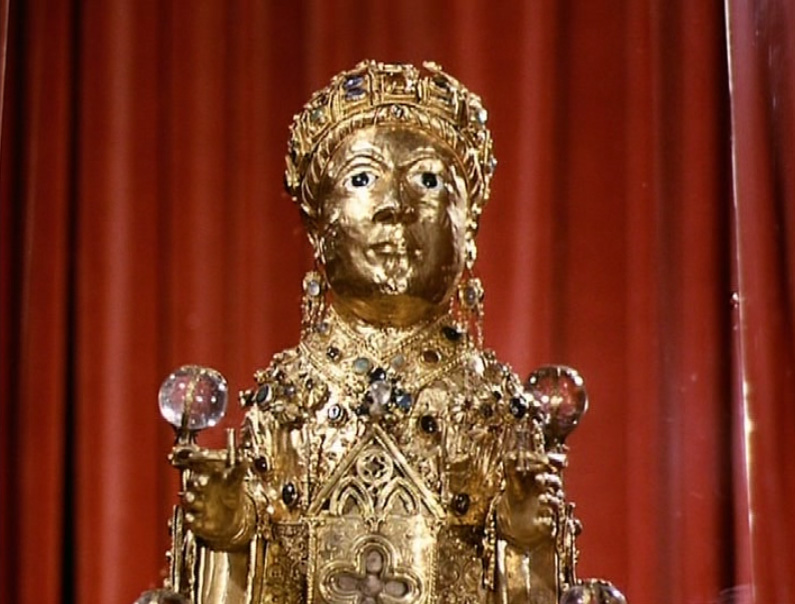 Except for it’s small stature, it is hard to imagine this figure represents a little girl. As a matter of convenience, the mask of a late Roman emperor was used to make the face. 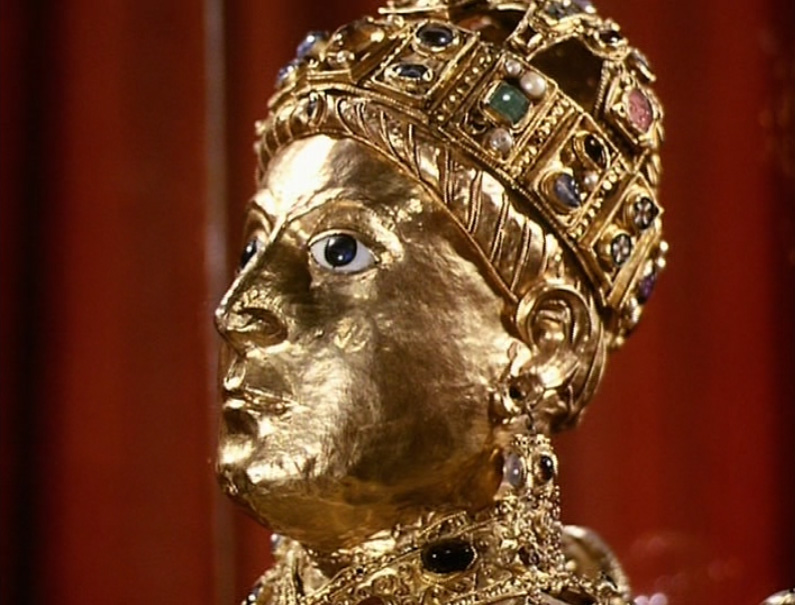 I was pleased to see Kenneth Clark pay attention to the lives of ordinary people during these times, and sometimes that included children. Another notable artwork was a painting by Joseph Wright of Derby. He made a number of paintings that seem to glorify the Age of Reason and the early Industrial Age, but each hints at something more disturbing and foreboding. An Experiment on a Bird in the Air Pump was a painting illustrating how gentlemen of leisure would conduct scientific experiments, this time studying the effects of removing the air on a hapless cockatoo. As one examines the center of the scene, we see two elegant and tender-hearted girls showing distress at this spectacle. One gentleman seems to be explaining to them the necessity of such endeavors while another seems to be expressing doubts. 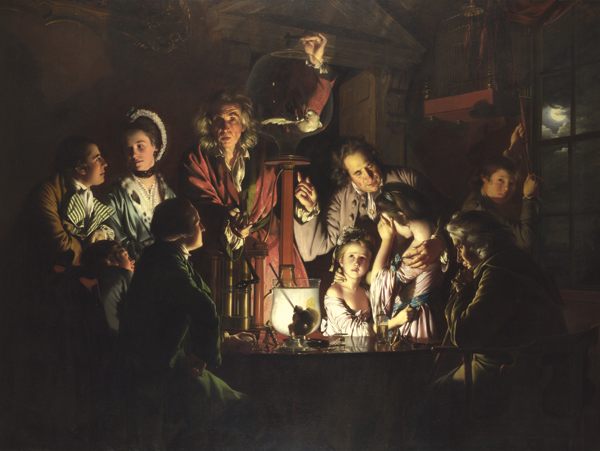 The creation of the Civilisation series is itself a remarkable story, and I heartily recommend it to anyone interested in European history or art. The U.S. was conducting early experiments with color television in the mid and late sixties, but the results were garish and simplistic. U.K. critics were questioning whether color was really worth the effort. In 1965, David Attenborough was put in charge of BBC2 and his mandate was to make the network innovative; he decided to introduce color and better image resolution as its mainstay. Kenneth Clark was a historian and a popular figure in British media but, approaching age 70, he had yet to learn the subtleties of presenting in a TV format. Attenborough and other producers felt that BBC2‘s color debut should be something really stunning, and it was decided to do a series on Western European art and to actually bring the relevant architecture, sculpture, paintings and music directly to the TV audience. Because this series was an ambitious endeavor, budget costs were understandably high, but Attenborough felt the series was of such high quality that it could be shown twice a week, effectively halving its air-time budget. As few had color televisions, many people organized Civilisation parties each week so that friends could share the experience.

Another innovation was the use of the subtitle “A Personal View,” used by the BBC many times hence. The problem was that Clark had an interesting but subjective view of history, and this phrase was added in anticipation to the inevitable scholarly objections. Clark had difficulty integrating the Spanish contribution to art and simply decided it was easier to ignore it. To Attenborough, it made perfect sense to use art history as a showcase for color, but he had a background in zoology and caught some flak from his associates, who felt his first major venture should have been about natural history. He made up for this by producing The Ascent of Man and then Life on Earth shortly thereafter. These successful series established the BBC’s reputation and style for the coming decades.